Accessibility links
Keeping The Dead In Their Place Unidentified coffins are a big problem in Louisiana, especially when they end up floating down flooded city streets. 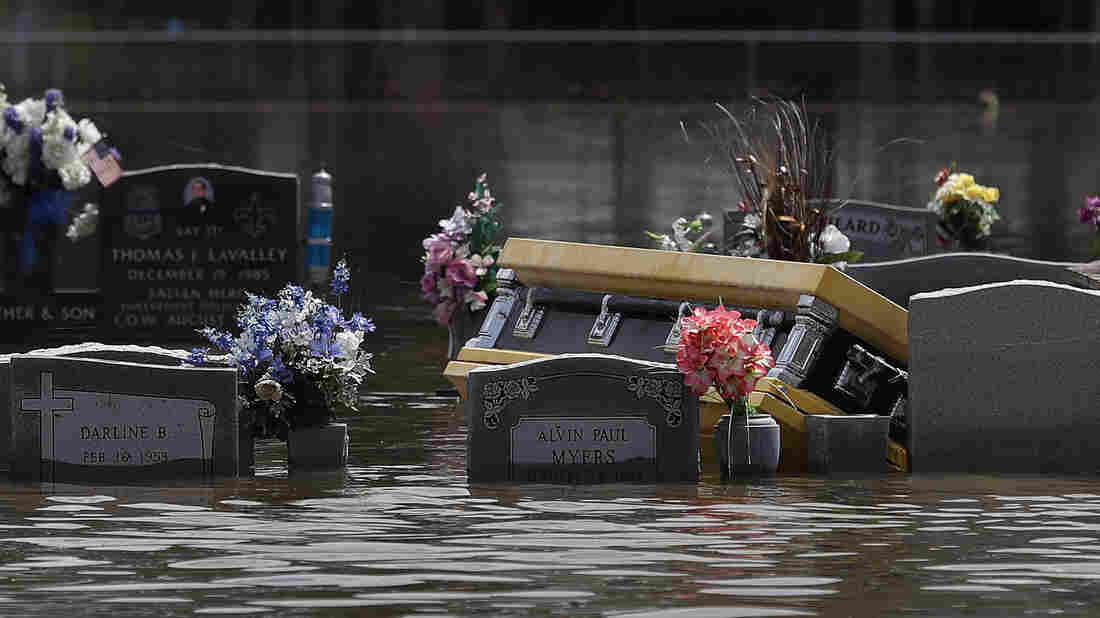 A coffin is seen in a flooded cemetery in August in Sorrento, La. Joe Raedle/Getty Images hide caption 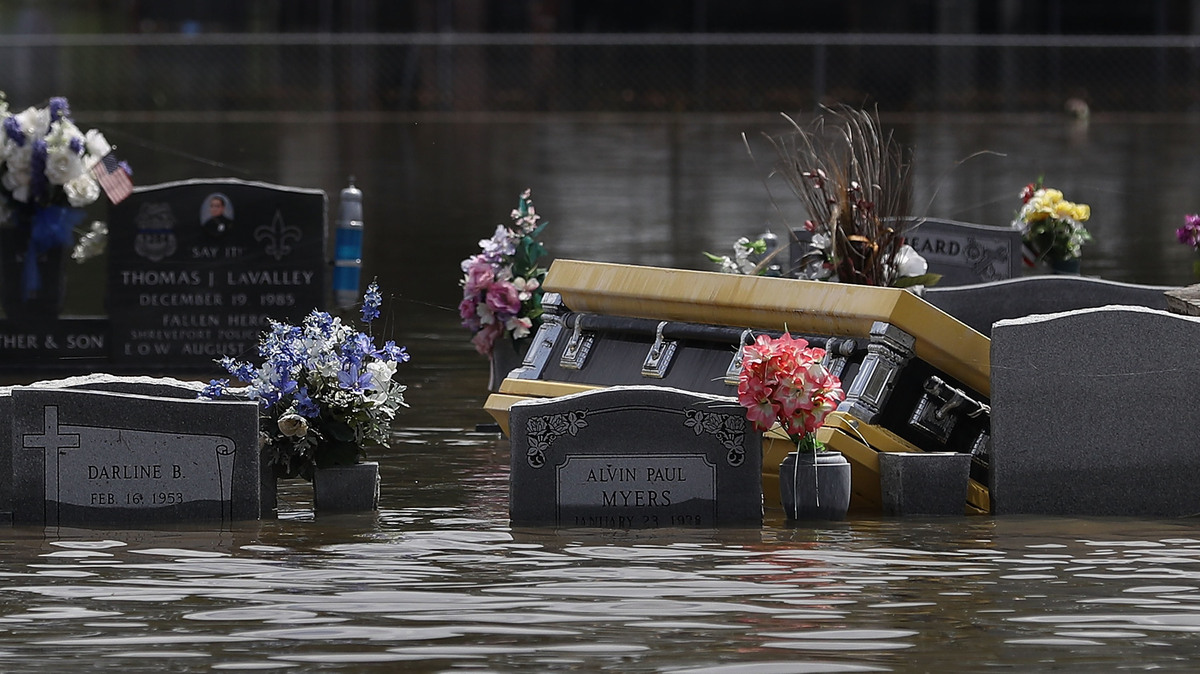 A coffin is seen in a flooded cemetery in August in Sorrento, La.

Runaway coffins. It's an issue floating to the surface with increasing frequency in Louisiana. It happened again last month when two feet of rain fell in less than 72 hours in some parts of the state. Towns were flooded — as were their cemeteries.

That's a catastrophe for the living though not usually for the dead. But in many parts of Louisiana coffins are placed partially or wholly above ground in raised tombs or vaults. They are not buried. So when a big storm hits, and flooding lasts for days, the vaults — and the coffins within them — can float.

"What happens is when we have hurricanes which brings flooding and high winds, buoyancy will cause these vaults to pop up and then float away from their graves," says Arbie Goings, with the Disaster Mortuary Operational Response Team, a group activated by the Department of Health and Human Services in case of large-scale disasters.

"Buoyancy." It's not usually a word you hear used in the mortuary world.

"We actually have had in a few cases caskets in vaults escape the cemetery grounds," says Goings, who is from Denham Springs, the town hardest hit by last month's floods. "And then they end up in wooded areas and neighborhoods and ponds and you name it and they've ended up there."

For Goings, who started out as a funeral director, it means he spends a lot of his time in coffin recovery.

The real challenge is when the waters recede and they've rounded up the coffins, how do you know to which grave they belong?

"There's no labels on these caskets, there's no names for the most part. Now there are a few exceptions but, so we don't even know who is in the casket. And so before we can re-inter somebody we have to identify who that individual is."

Goings has been working with state officials to develop a system to address this, um, grave issue.

After Hurricane Katrina, when nearly a thousand departed escaped their earthly moorings, Louisiana required that all coffins have some kind of identification. But Goings says that's had mixed success. Death certificates tucked inside coffins are destroyed by water. Labels wash away.

Goings is working with state officials to find a more permanent solution. The team is considering using bar codes and attaching tracking devices to the coffins. They've developed an app to scan and trace runaways. But to work, every coffin must first be tagged. And that's a long ways away.

The real solution is to bury people six feet under, says Goings. But he's up against hundreds of years of custom and tradition. "I actually have grandparents that are buried right along the Atchafalaya River in Louisiana and they're buried above ground because that is just the way it has always been done."

But it doesn't have to be that way.

Goings scoffs at the suggestion that high water tables require above-ground burials. That's something that guides tell tourists visiting the cemeteries in New Orleans, he says. They are just dead wrong.

When Goings goes, he says, he's going six-feet under.