Accessibility links
Not My Job: Jamie Lee Curtis Gets Quizzed On Unlikely Inventions In the late 1980s, Curtis filed a patent for a diaper/baby wipe combo, so we've invited her to play a game called "Eureka!" Three questions about inventors and their inventions. 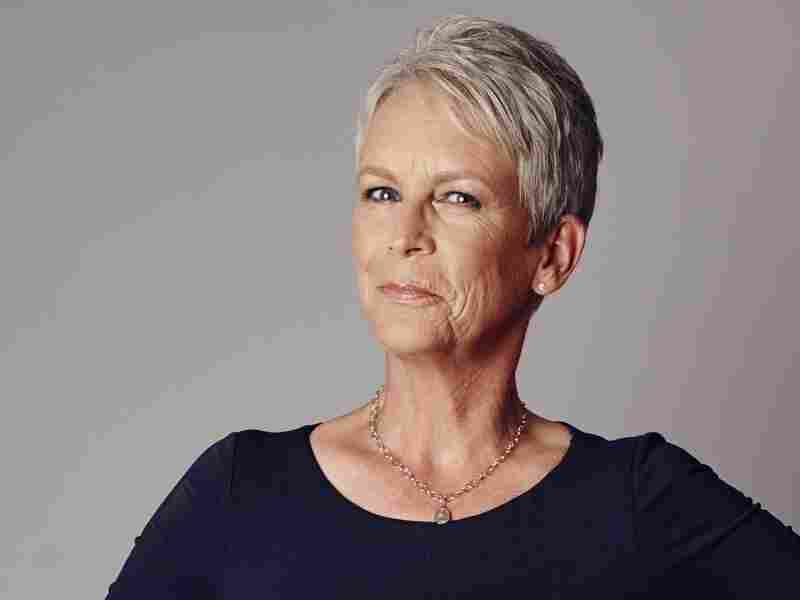 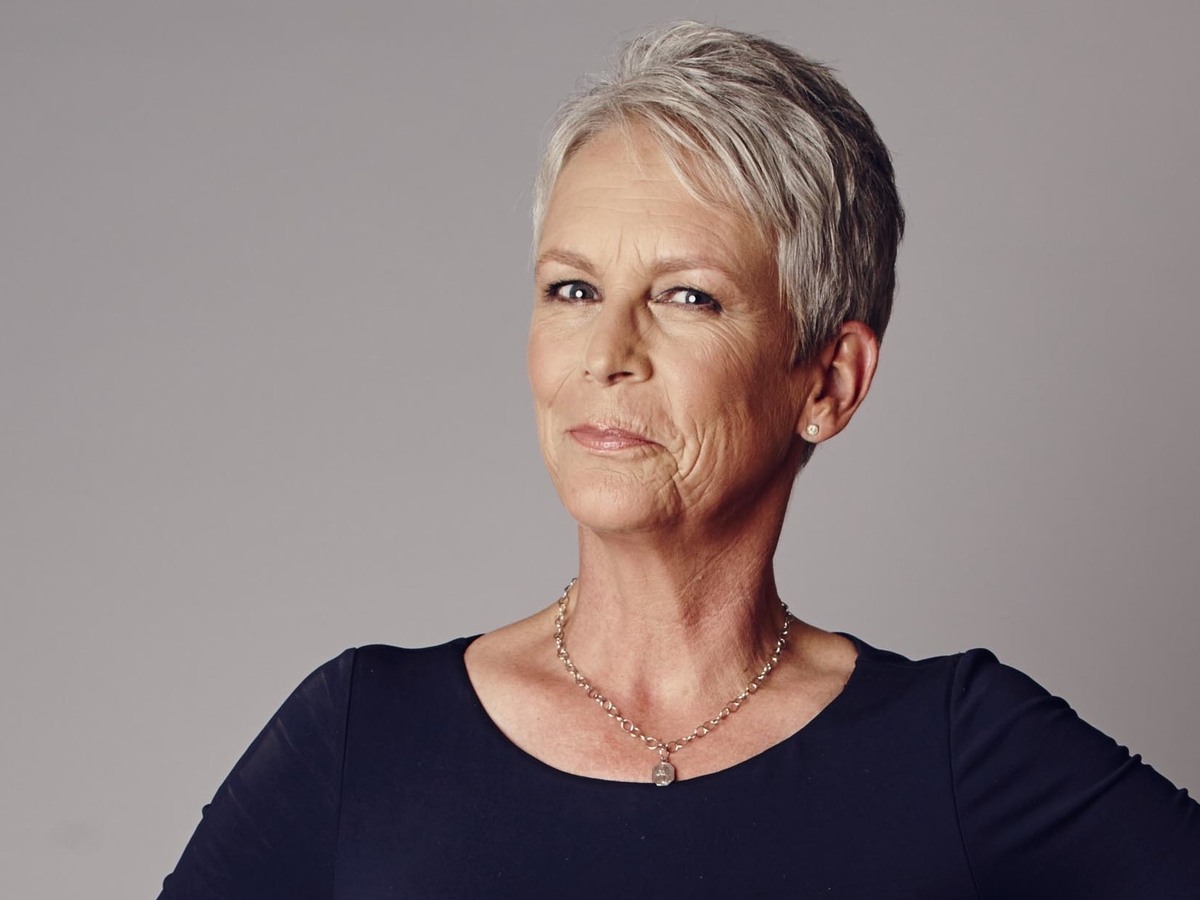 In the 1970s, struggling actress Jamie Lee Curtis landed the role of Laurie Strode in the seminal horror movie Halloween. Since then, she's starred in dozens of movies (True Lies and Freaky Friday to name a few) and managed to become a best-selling author and a member of the House of Lords. It just goes to show: If you don't get stabbed to death in the first hour, you'll do great!

In the late 1980s, Curtis filed a patent for a diaper/baby wipe combo, so we've invited her to play a game called "Eureka!" Three questions about inventors and their inventions.

And now the game where we invite A-listers to spend some time with the other parts of the alphabet. It's called Not My Job. Jamie Lee Curtis was a struggling actress in Hollywood back in the '70s when she got a job as the last girl left alive in the seminal horror movie "Halloween." Starting from there, she starred in dozens of movies from "True Lies" to "Freaky Friday" and managed to become a bestselling author and a member of the British House of Lords. It just goes to show if you don't get stabbed to death in the first hour, you'll be fine. Jamie Lee Curtis, welcome to WAIT WAIT... DON'T TELL ME.

SAGAL: You have had such an amazing career for so long doing so many different things. Is there one thing that you're most known for that most people say, oh, you're Jamie Lee Curtis. You...

CURTIS: Well, it's coming up. You know, it's September. It comes up in October, a certain day in October.

SAGAL: But I'm amazed because you've done so many amazing things since then. For example...

CURTIS: And I'm not dead yet.

SAGAL: No. But no one comes up and says, oh, Jamie Lee Curtis, you were such a badass in "True Lies." That was great, for example.

CURTIS: Yes, but it's really "Halloween."

MO ROCCA: How do you celebrate Halloween? What do you get dressed as, yourself?

CURTIS: Well, that would be just easy. You know, I don't have to do much. We live in a dark neighborhood. We get no kids.

ROCCA: Oh, wait, wait. I have a horror question since we're on the subject. How old were you before you were allowed to watch your mother in the shower scene in "Psycho?"

SAGAL: Oh, I should establish - because, I don't know, you have such a wonderful career, people may not know that your parents were two very famous actors - Janet Leigh from "Psycho," among many other movies, and, of course, Tony Curtis. So just wanted to point that out.

SAGAL: Back to Mo's question.

ROCCA: Well, yeah, how old were you before you were allowed to watch that scene?

CURTIS: So let me just remind you young people.

CURTIS: The movies were in the movie theaters.

SAGAL: Yes, I've heard of them.

CURTIS: And then they weren't in the movie theaters.

CURTIS: So basically, as a child, I would have had no way to actually watch "Psycho" because it wouldn't - I mean, it's not going to be on network television.

DICKINSON: I just picture Alfred Hitchcock, like, having a screening room and inviting you over.

CURTIS: Yes, it was lovely.

SAGAL: Was it a little odd that you were the daughter of a woman who - among many other roles, I should say, she was in "Bye Bye Birdie," many other movies - she was perhaps most famous for being stabbed to death, and then your first big movie was the movie in which you were the only person not stabbed to death? Were you showing her up?

CURTIS: Very intense analysis of that. Thank you, guys.

CURTIS: I'm going to really unpack that one.

SAGAL: Let's talk about something else.

SAGAL: You, in addition to being the child of Hollywood royalty, you are actual British aristocracy. Is this the...

CURTIS: My husband inherited a title from his father...

CURTIS: ...When his father passed away. And therefore, it made my husband Lord Haden-Guest and it made me, by marriage, Lady Haden-Guest.

CURTIS: So when Tony Blair was elected - and basically one of the things he talked about in his campaign was to do away with hereditary peerage, which was the correct thing to do, it basically took it away forever from my husband's family forever.

CURTIS: So my husband retains his title.

CURTIS: I am still Lady Haden-Guest. But it will then end after.

SAGAL: Really? You don't pass it on to your children?

SAGAL: You are, of course, probably the most famous...

SAGAL: ...And successful of the actresses turned children's book writers. You've been writing children's books now for a long time. Is there a particular secret to it? Because many people attempt it and aren't very good at it.

SAGAL: What is it?

CURTIS: OK, my secret is this - I believe that parents are the ones who are going to read these books to children.

CURTIS: So you have to give the parents something. So, for instance, I did a book called "Where Do Balloons Go? An Uplifting Mystery..."

CURTIS: ...Which is about what happens when you let go of a balloon. So one of the stanzas of that book is where do they go when they float far away? Do they ever catch cold or need somewhere to stay? Now, where do you think the balloon is going to stay in the illustration in the book?

CURTIS: And the kids don't have a clue.

SAGAL: Well, Jamie Lee Curtis, it is a pleasure to talk to you.

SAGAL: And we have asked you here to play a game today. This time, we're going to call it...

SAGAL: Now, in addition to everything else we've talked about that you've done, we didn't even get to the fact that you're an inventor.

SAGAL: You invented, if I understand, the diaper-wipe combo. It's got the wipe right in the diaper, right?

SAGAL: That is a brilliant idea.

ROCCA: And can we use it on Bob, your uncle?

SAGAL: We thought how much do you know about other impressive inventions and their inventors? So we're going to ask you three questions about inventions. Answer two of them correctly, you'll win our prize for one of our listeners. They will get Carl Kasell's voice on their voicemail, a wonderful invention if ever there was one. Bill, who is Jamie Lee Curtis playing for?

SAGAL: The invention of the humble fire hydrant has an interesting history. Which of these is true? A - it was originally designed as an urban dog relief station and only later did somebody realize it could also pump water to put out fires; B - the original patent for the fire hydrant was lost because the patent office holding it burned down; or C - the inventor stipulated that all fire hydrants should be placed such that you always think there's a parking space until you get right up to it.

CURTIS: I'm going with the burned down.

SAGAL: You're going to go with the burned down. You are right.

SAGAL: In fact, the other two things we made up could be true. We don't know. The patent office burned up in 1836. All right, here's your next question. Just this week, we saw a major innovation in food. An Australian man has invented what amazing new food product? A - the pork smoothie; B - the shrimp-cicle (ph); or C - the hamdog - that's a hot dog-hamburger combination.

SAGAL: You're right. You're absolutely right.

DICKINSON: Well, that sounds so awesome.

SAGAL: Did you know that?

SAGAL: You just knew it. You just - it's something that you saw the world needed.

JOBRANI: Do they have ketchup that's mustard, like, you know, mustup (ph)?

SAGAL: All right, here is the last question, and it's about somebody you actually may know - Francis Ford Coppola. He invented an incredibly useful device, and this is real, what was it? A - a portable static generator to fake a bad phone line so you can get off the phone if you don't want to be on the phone anymore; B - a shirt with a numbered grid on the back so you can indicate to someone exactly where to scratch your itch; or C - beer goggles goggles, which reverse the effect of inebriation on visual perception.

SAGAL: First one is a little handheld portable static generator. You hold it up to the phone, it fakes a bad phone line so you can get off the phone if you don't want to be on the phone anymore.

SAGAL: You sure about that?

ROCCA: That's the one she wants.

SAGAL: So you're going to choose that one?

SAGAL: I'm afraid it was actually, amazingly enough, the shirt with the numbered grid on the back.

SAGAL: Francis Ford Coppola has a patent for this. The idea is you wear the shirt, you hold a card with the same grid, somebody scratches. You're like, no, F-8, and they scratch you on F-8 and they get your itch. It's a great idea. Bill, how did Jamie Lee Curtis do on our quiz?

CURTIS: She did very well because she won.

JOBRANI: We love you.

CURTIS: Jamie Lee Curtis has a new children's book called "This Is Me." It is out now. Go pick it up. Jamie Lee Curtis, thank you so much for joining us on WAIT WAIT... DON'T TELL ME.

CURTIS: Thank you, guys. It was fun.

SAGAL: Thank you so much. Bye-bye.

SAGAL: In just a minute, we crack open a cold one in our Listener Limerick Challenge game. Call 1-888-WAIT-WAIT to join us on the air. We'll be back in a minute with more of WAIT WAIT... DON'T TELL ME from NPR.