Accessibility links
Long Before Burning Man, Zozobra Brought Fire And Redemption To The Desert For decades, residents in Santa Fe, N.M., have gathered to burn a massive puppet — but only after stuffing it with symbols of their woes. It's a way to release the past year's sadness and start anew. 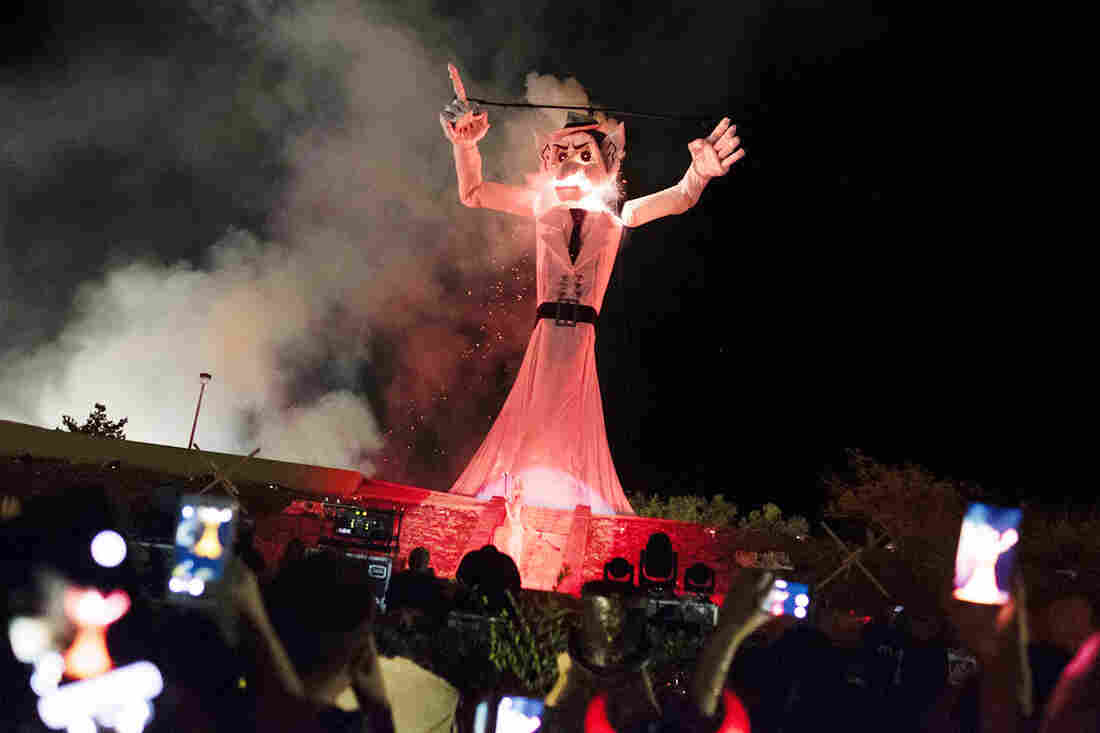 Zozobra has become so popular that in Santa Fe, NM, a city of just over 80,000, almost 56,000 people have come out to see him this year. Melinda Herrera/The Santa Fe Kiwanis Club hide caption 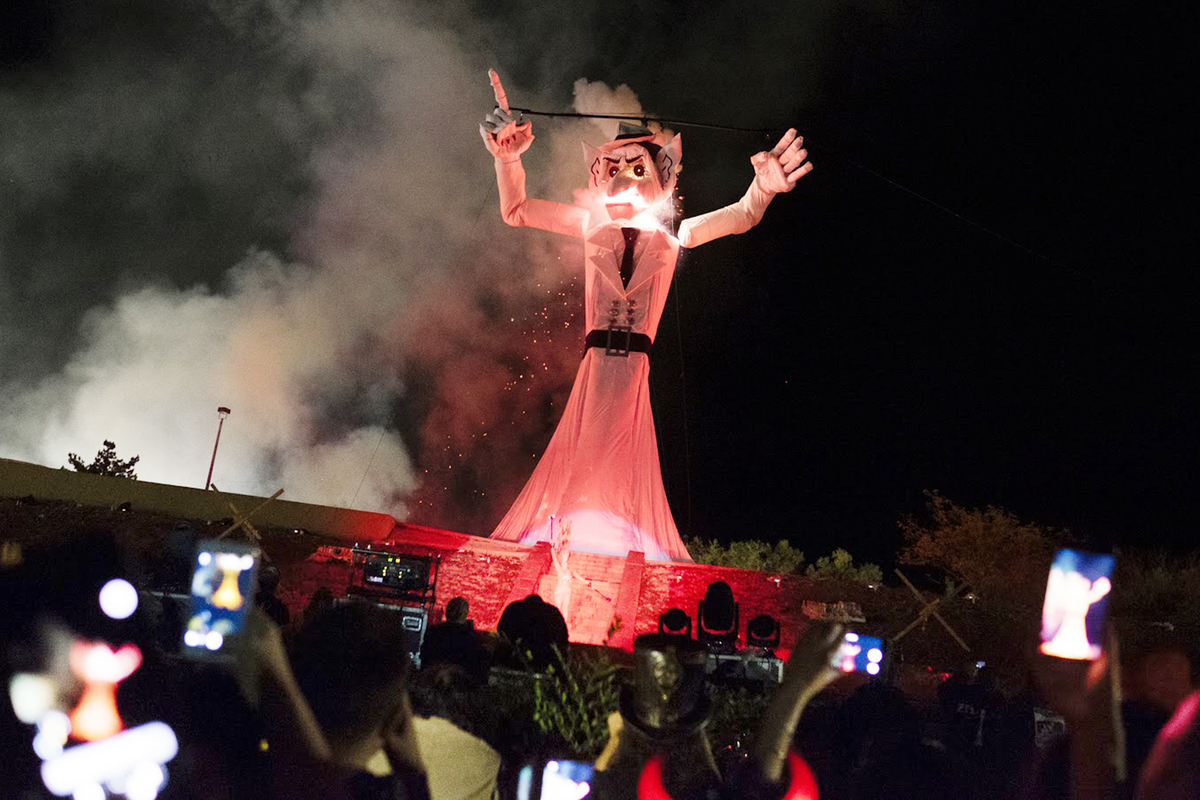 For those of us who grew up in Santa Fe, N.M., there are few figures that loom larger than Zozobra. I mean that literally, as much as figuratively: The 50-foot-tall marionette is as familiar as Santa Claus — only, instead of stealing away with cookies and milk, Zozobra ends its holiday each year by being ritualistically burned to death before a crowd of tens of thousands of screaming people.

Zozobra, which takes its name comes from the Spanish word for pain or despair, "represents all of the gloom of Santa Fe," says Kenneth Garley. The self-diagnosed Zozobra fanatic is secretary of the Santa Fe Kiwanis Club, which builds the massive, scowling puppet and puts on the annual burn. "The burning of Zozobra is the burning of all the gloom."

In the weeks leading up to the burn, thousands of people anonymously drop slips of paper containing their handwritten woes into the Gloom Deposit Boxes spread around town. Zozobra's body — built mostly from wood, chicken wire, and papier mache by hundreds of volunteers — is then stuffed with all the gloom that's fit to burn.

Over the years that assortment has included wedding albums and pathology reports. Even the Santa Fe city police department donates thousands of police reports of shredded police reports to add its share of flammable misery.

That means Garley, who was less than a year old when his parents brought him to his first burn, has seen a lot of gloom go up in smoke. In the 53 burns he has attended, he says he's seen wedding dresses, mortgage papers, severance notices. Last year, when one of his fellow Zozobra builders passed away, he placed some of their ashes inside the puppet, "and that way she became a part of Zozobra forever."

Elizabeth Harris, who has been attending Zozobra since shortly after she moved to Santa Fe 30 years ago, says her annual contributions these days are usually minor complaints. "But about 25 years ago, I was diagnosed with a stage 4 cancer," she says. "So, I took a copy of the pathology reports, and I stapled 10 pages of paper right onto the two-by-fours. So that was a pretty fabulous burn that year at Zozobra."

But the ritual isn't just about the gloom. It's also a way for parents to scare their children into obedience, a rite of passage for young teenagers, and the biggest party of the year for everyone else. 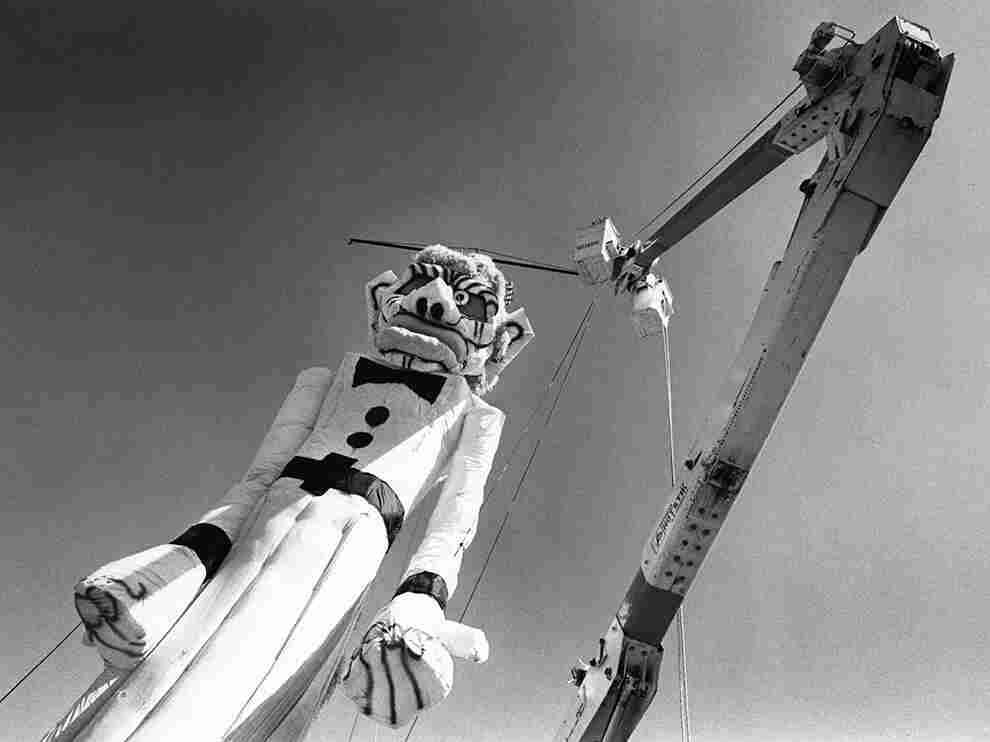 The Zozobra, a 50-foot-tall, scowling, ghostly white marionette with flailing arms and a flowing muslin robe. Here it is, under construction. Mark Lennihan/Santa Fe New Mexican/Courtesy of the Palace of the Governors Photo Archives hide caption 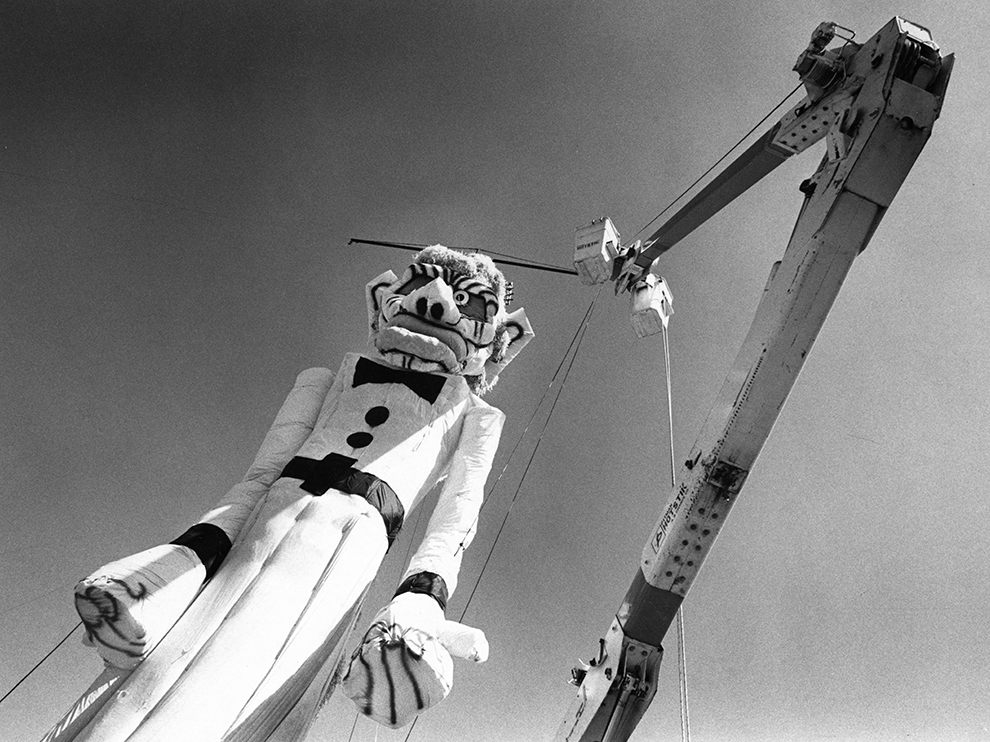 The Zozobra, a 50-foot-tall, scowling, ghostly white marionette with flailing arms and a flowing muslin robe. Here it is, under construction.

The Puppet's Menace, Past And Present

Despite its decidedly primeval flavor, the event actually goes back to the mid-1920s, when a young Philadelphia painter named Will Shuster moved to the Southwest, seeking relief from his tuberculosis. What he found in Santa Fe was a budding avant-garde arts community and a city steeped in Catholic tradition and tourist boosterism.

Shuster created Zozobra as a satirical, vaguely pagan counterpoint to the 200-year-old Fiestas de Santa Fe — an annual Catholic Hispanic festival celebrating the reconquest of New Mexico from the Pueblo Indians. Over the years, the tradition grew alongside the Fiestas, and Zozobra itself grew from a sickly, Nosferatu-looking boogeyman of average human height into the towering monster of today. 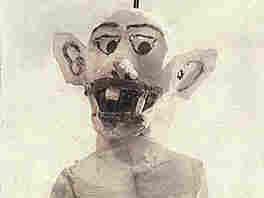 Zozobra has become so popular that in this city of just over 80,000 almost 56,000 people came out to see him this year.

When I arrived a few hours before the burning, the entrance to the site was already packed. Across the street, a trio of born-again preachers were pacing the sidewalk with homemade signs and megaphones, calling out to celebrants to abandon their wicked ways. "Shame on you parents," I heard one of them say, "who would bring your kids and get them involved in the sin of idolatry, to worship a 50-foot piece of trash?"

Another protester, Rolando Iglesias, drove up from Roswell, N.M., to dissuade potential sinners. He says that seeking solace from anything but Jesus is idolatry, pure and simple — that "even though it's tradition or whatever that the town does, well, it angers God."

Zozobra has angered some locals, too. Some associate the event with the occasional brawls and outbursts of gang violence of decades past, while at other times the event has also veered uncomfortably close to representing violence against real people.

In 1943, Zozobra was made to look like a mashup of Japanese Emperor Hirohito, Italian dictator Benito Mussolini and Adolf Hitler. That year's burn took place just a couple of miles from a Japanese-American internment camp. During the First Gulf War there was an unsuccessful effort to fashion Zozobra in the likeness of Iraqi strongman Saddam Hussein.

Every few years, the local newspaper, the Santa Fe New Mexican, publishes editorials arguing to pardon Zozobra or do away with what they see as an act of mock mob violence.

Event chairman Raymond Sandoval acknowledges that there is a dark side to the burning. "Zozobra is our scapegoat," he says. "There is a violence to burning this fifty foot effigy."

But Sandoval points to the scholarships and charity projects that the Kiwanis Club funds every year with ticket sales from the event. He also says that the trade-off is worth it.

"The idea — which is to stop for a moment and to really think about things that you regret and how you can be a better person, how you do things differently — allows us to reflect and I think become a better community," Sandoval says.

But before they reflect, they burn. 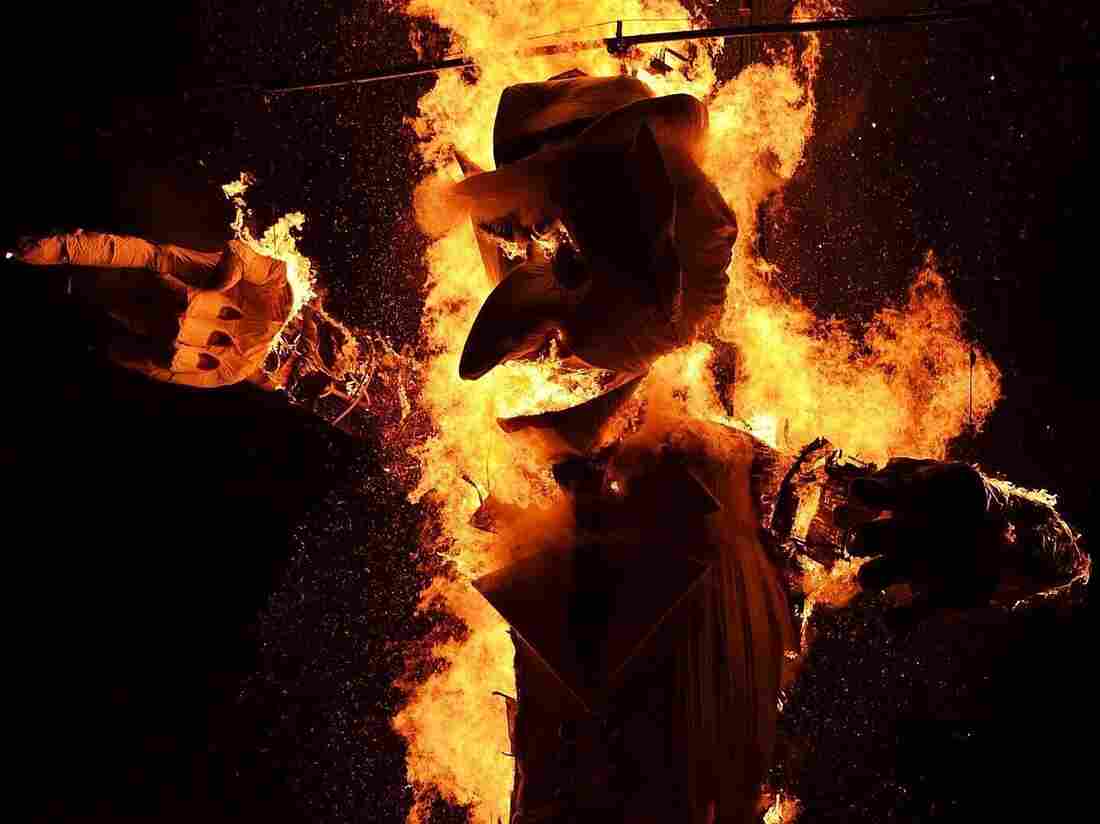 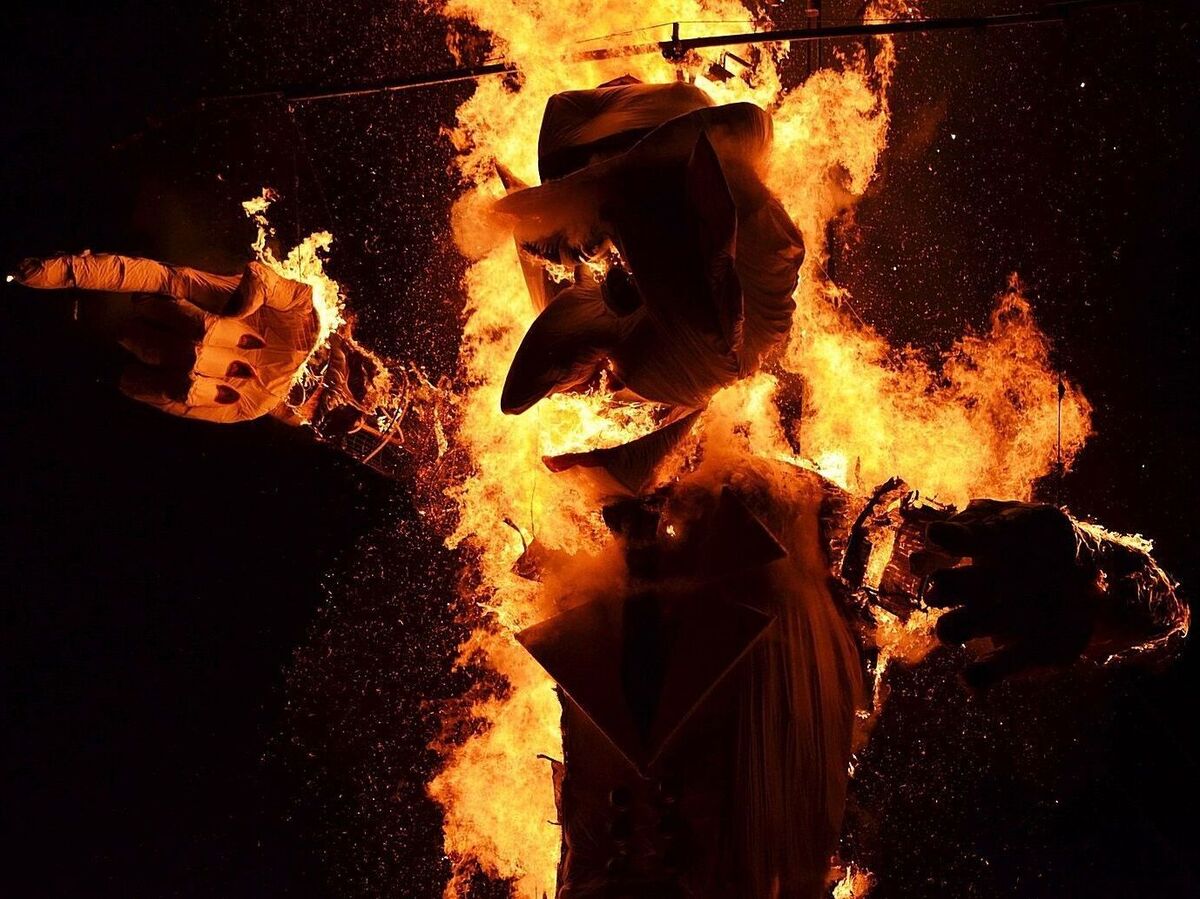 This year's ghastly Zozobra, going up in flames.

A few minutes after dusk, the lights go out and the crowd comes alive. A firedancer taunts Zozobra to a chorus of fireworks and mariachi music, and as the tension builds the death throes of Old Man Gloom, the crackle of the flames, get louder — until the crowd's excitement crescendos and Zozobra's body is engulfed in flames. For a couple of minutes, the puppet waves its arms and screams in anguish, to the cheers of the crowd, until it finally gives out one last whimper and crumples to the ground.

After the burn, the field slowly empties out, strewn with discarded turkey legs and crushed cans. On the hill above, the dozens of volunteers who have spent the better part of the year building Zozobra, gather around the embers of their fallen enemy to roast marshmallows over his smoldering remains and bask for a few sweet hours in the absence of their worries.

"Whether it works or not, at least for that night, their gloom is gone. It's been lifted," says Kiwanis Secretary Kenneth Garley. While the battle against the gloom in our lives is ongoing, he says, Zozobra offers the often disparate threads of the community a reason to come together, and a momentary escape from the pain of everyday life.

"Then we have to face the realities of the world the next day," he says. "But you know, for at least that night it's a celebration that things can get better, and will get better for all of us."