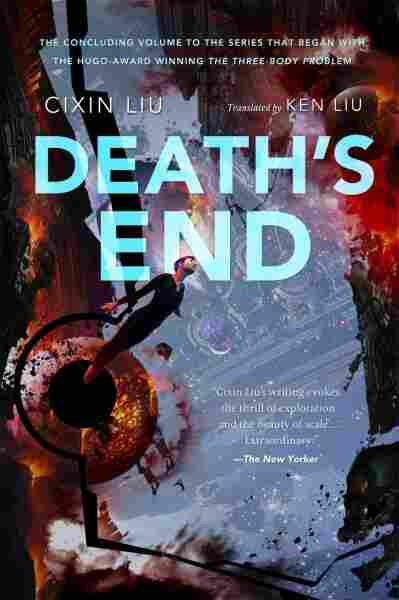 When The Three-Body Problem, the first installment of Cixin Liu's Remembrance of Earth's Past trilogy, won the Hugo Award for Best Novel in 2015, it drove home a big point: Science fiction from other countries has been overlooked too long here in the U.S., and it's to everyone's benefit to fix that.

Not only was The Three-Body Problem — first published in China in 2008 before being translated into English by acclaimed American author Ken Liu — an exquisitely epic novel, it was a fascinating window into how science fiction has evolved in a culture different than our own. Set in the near past as well as the near future, it depicts the first contact between a Chinese physicist and an alien race whose interest in Earth is less than benign — a timeworn idea that Liu rendered with complexity, nuance, and plenty of head-spinning astrophysics.

The Three-Body Problem was followed in 2015 by the equally challenging and rewarding The Dark Forest. Now, Remembrance of Earth's Past has come to a close with Death's End. As trilogy-cappers go, it's satisfying — entirely on its own terms, though. Like the two installments before it, Death's End focuses on a different protagonist. In this case, it's Cheng Xin, a rocket scientist from our era revived from artificial hibernation half a century in the future.

The world she finds is not the one she remembers: The alien Trisolarans — who hadn't yet reached Earth in her time — are now locked in a détente with humanity, thanks to an ingenious deterrent (which forms the core of The Dark Forest's plot). But this new age of peace and technological prosperity is a precarious one, as she discovers when she's charged with maintaining Earth's defenses against an enemy that isn't going to give up so easily.

The bones of the premise are nothing new, but Liu continues to elaborately dress them. And dress them. And dress them. If you thought The Three-Body Problem and The Dark Forest were expansive, they're nothing compared to Death's End. The plot telescopes out not merely for decades, but for centuries. One universe not enough? There are plenty more. How about some extra texts? There are numerous stories-within-stories nested in Death's End, including a sequence of lushly told fairytales that show off Liu's virtuosity, not to mention some sparkling, much-needed contrast with the heavier sci-fi tone of the rest of the work. Within this intricately structured, staggeringly cosmic, reality-contorting framework, he weaves all the personal and philosophical conflicts he's seeded along the way into a resoundingly orchestrated finale.

If you thought 'The Three-Body Problem' and 'The Dark Forest' were expansive, they're nothing compared to 'Death's End.' The plot telescopes out not merely for decades, but for centuries.

Unfortunately, a few of the flaws of the first two books are ported into Death's End. Liu's exposition can get downright leaden, especially when there are reams of scientific jargon and theory to be delivered to the reader. Still, his sheer joy in imparting these ideas beams through like a laser. And while Cheng Xin isn't always compelling enough to carry the narrative, her revelations about the nature of the universe — not to mention a breathtaking denouement that gives the "message in a bottle" cliché a new lease on life — more than make up for it.

Another cliché creeps into the ending of Death's End: rainbows. A bit on the nose, but Liu should be forgiven. The scope of Remembrance of Earth's Past is majestic, but it's also grim, with no shortage of sobering ruminations on humanity's place in the metaphysical clockwork of existence. A little light at the end of the tunnel is a welcome respite.

"The precision of Nature can sometimes exceed the imagination," Liu writes sagely, one of the many profound utterances sprinkled routinely throughout the trilogy. A meditation on technology, progress, morality, extinction, and knowledge that doubles as a cosmos-in-the-balance thriller, Death's End is a testament to just how far his own towering imagination has taken him: Far beyond the borders of his country, and forever into the canon of science fiction.