Accessibility links
Who Came Out Ahead In The First Clinton-Trump Debate? On this occasion, the often dour Clinton gave way to beaming smiles and occasional chuckles. Trump had just one salient objective — to project a calm and presidential air — yet struggled with it.

Who Came Out Ahead In The First Clinton-Trump Debate?

Who Came Out Ahead In The First Clinton-Trump Debate? 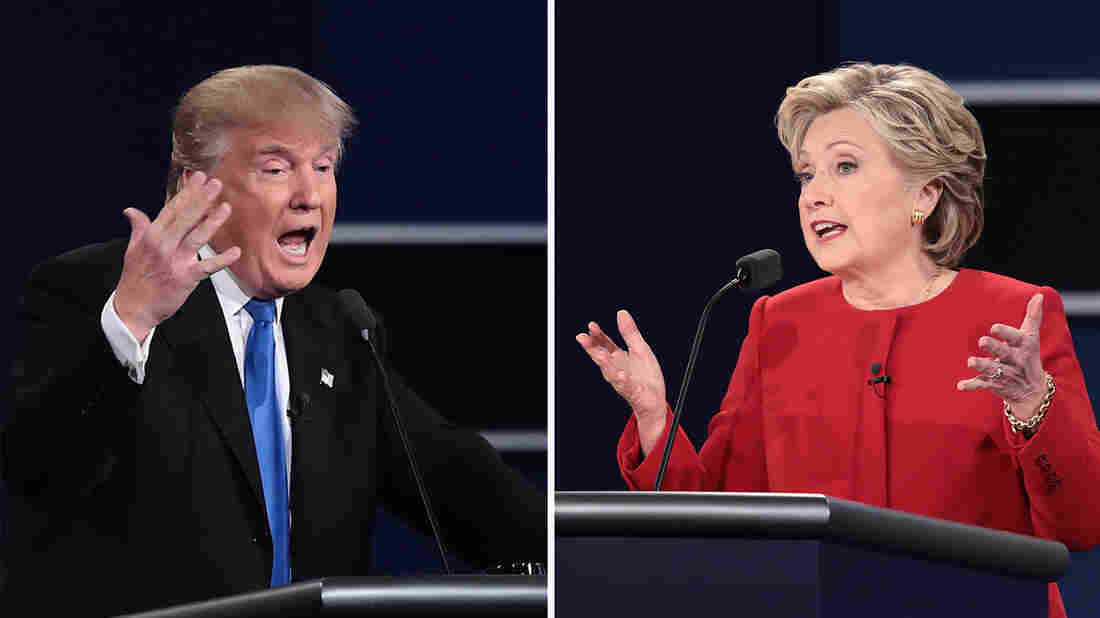 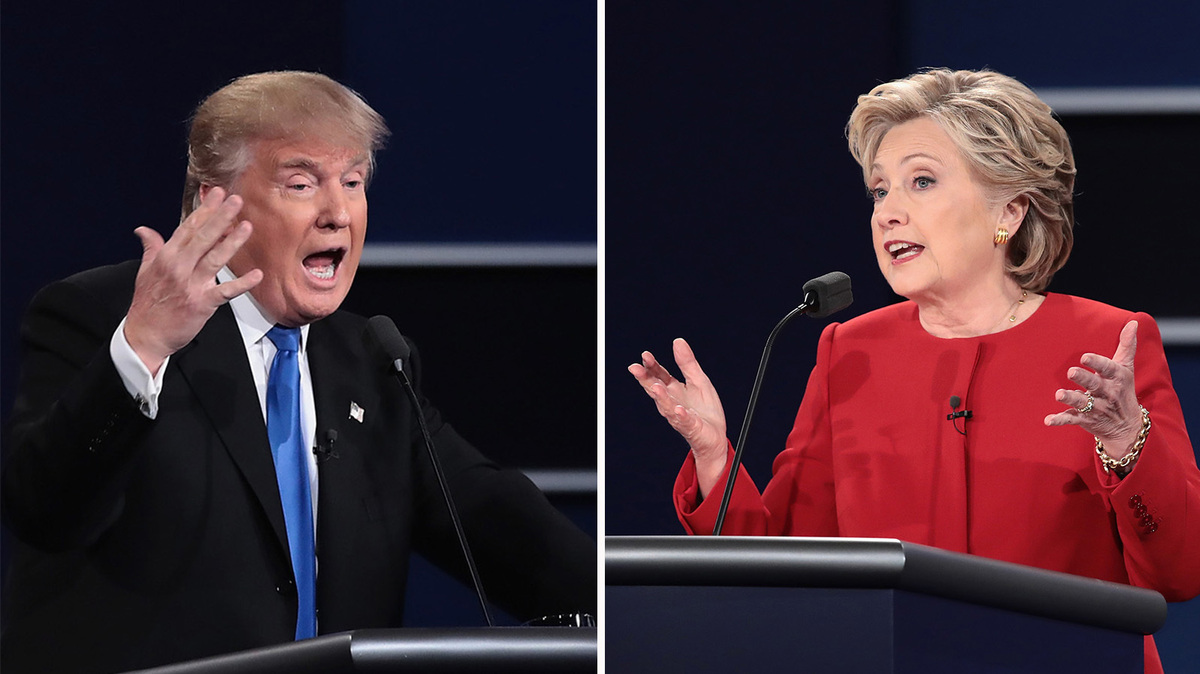 You could see the contrast in the eyes of the respective candidates' spokespersons, surrogates and family members after the first presidential debate of 2016 had wrapped.

As always, earnest efforts were made on both sides to claim victory — even insist on it — after the nationally televised clash between Democratic nominee Hillary Clinton and Republican nominee Donald Trump.

"Trump was especially strong on the issues in the first 45 minutes," said former Trump campaign manager Corey Lewandowski on CNN.

Yet a general and clear consensus formed quickly among the snap pollsters, focus groups, reporters, commentators and TV panelists. And it did not favor Trump.

In sum: Clinton projected more of what she wanted than Trump, who did not strike the contrast or meet the expectations set up by his own campaign.

What was less clear was whether the voters got what they wanted from the debate. Did they learn what they lacked about the candidates? Did the undecided gain some guidance in their decision?

Clinton surprised by navigating a rather complicated passage through multiple challenges. She had to be energetic but serious, tough but pleasant, candid but charming, forceful but warm and human. It seemed a puzzle, yet she emerged with a smile — and even a bit of a shoulder shimmy late in the debate at a moment when she felt especially good.

By contrast, Trump had just one salient objective — to project a calm and presidential air — and yet, he struggled with it.

The contrast between her complex task and his simple focus was widely noted, and roundly criticized by those who said it set too low a bar for Trump to succeed. Some said he merely needed to show up to gain stature on stage and, thereby, to win no worse than a split decision.

Similarly, many of us expected his freewheeling style to connect far more effectively onscreen than her schoolteacher stress on process and policy.

But Trump was not quite successful in bringing his campaign-rally style to the small stage and the split-screen camera format. He began at a debate volume but segued to sports arena mode, speaking as if addressing a big crowd of supporters eager to cheer whatever he said.

Meanwhile, the often dour Clinton manner gave way to beaming smiles and occasional chuckles. Remarkably, she seemed to be having a good time. That has rarely been said about her big public showdowns in 2016. It recalled, instead, her back-to-back hits of last fall: testifying before the House committee investigating the Benghazi incident and then eclipsing four rivals for the Democratic nomination in their first debate.

There were those who said that Trump, too, got what he needed on Monday night. While he did not land any roundhouse blows, he put points on the board repeatedly and drew blood on the use of private email issue. He assailed manufacturing job losses to foreign countries, unfair trade practices by competitor nations, and the rise of ISIS abroad and violent crime at home.

But what seemed a fair fight through the early rounds deteriorated thereafter. Trump sniffled audibly and gulped drinks of water, often glowering and gripping his lectern. And as the debate lengthened, his temper grew shorter.

He grew increasingly snappish toward Clinton and toward NBC moderator Lester Holt. When corrected by Holt on the birther myth, his view of the Iraq War and federal court decisions on a certain police tactic called "stop and frisk," Trump disputed the corrections. And when needled by Clinton about his various vulnerabilities, he shot back — often with more anger than aim.

When she said he had paid no federal income taxes at times in his business career and suggested he might not have paid them in recent years, either, Trump replied: "That makes me smart."

When she said he had cheered the collapse of the housing market in 2008 because it enabled him to buy distressed properties cheaply, he came back with: "That's called business, by the way."

The First Presidential Debate In 100 Words (And 6 Videos)

Trump was as likely to lean into his microphone and talk when it was not his turn as he was when it was. He offered interjections when Clinton was speaking, and often demanded time to respond on a given issue even after Holt wanted to move on.

At one point, he jabbed at Clinton for being off the campaign trail in recent days to prepare for the debate. "Yes, I did," she said. "And you know what I else I prepared for? I prepared to be president."

Near the end of the debate, Holt asked about a comment Trump had made regarding Clinton's looks. Trump said that was really about stamina for the job, which he said she lacked. Clinton, clearly prepared for the topic, went after Trump for his comments about a contestant in one of his beauty pageants, a Hispanic woman he had referred to as "Miss Housekeeping."

While there was a lot of conflict, the debate did not do much to fulfill the needs of voters seeking information beyond the candidates' personae. Many issues went unmentioned, including the current prospect of a government shutdown in Washington over a pending measure to fund the government, the lack of consideration for Supreme Court nominee Merrick Garland, the need for funding to fight the Zika virus, and demand for federal dollars for flood victims in Louisiana and lead-poisoning victims in Flint, Mich. There was also surprisingly little discussion of immigration, or Trump's famous proposal for a wall from the Pacific Ocean to the Gulf of Mexico.

Across The Country, Fascination And Indifference On Debate Night

It was also hard to say whether undecided voters got much guidance from the debate, which took place before a mostly silent audience at Hofstra University in suburban Hempstead on New York's Long Island. The first post-debate surveys showed little sign that the uncommitted were moved. (Although in the past, such movement has been more visible in the days after a debate than on the night of the event.)