Accessibility links
Hardboiled Historical Noir With A Heart In 'By Gaslight' Steven Price's hefty new novel stars William Pinkerton, whose father founded the famous detective agency that bears his name, plus a colorful cast of Victorian ne'er-do-wells. And a severed head.

Hardboiled Historical Noir With A Heart In 'By Gaslight'

Hardboiled Historical Noir With A Heart In 'By Gaslight' 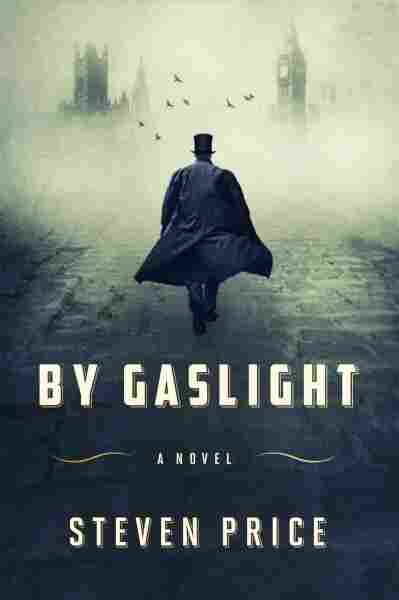 Every book can't be War and Peace. Readers may approach a doorstop novel of some 700-plus pages with a mixture of hope and dread: hope that the tome will offer a tale to relish, dread from being betrayed one too many times. By Gaslight, the second novel by award-winning Canadian poet Steven Price, proves engrossing enough to warrant its forest-depleting bulk. I found myself returning to passages not only because I occasionally lost the thread of this historical mystery's manifold plots, sub-plots and asides, but because I wanted to revisit the somber music of the telling.

Chicago-based Allan Pinkerton, founder of the famous (some would say infamous) detective agency that bore his name, has been a fixture of Civil War-era fiction and non-fiction alike. Pinkerton's legacy serves as the jumping off point for a high energy drama starring his son, a second-generation detective named William Pinkerton, who has taken over the business after the death of his father. Spinning fiction out of fact, Price creates an evocative world, cast not in shades of stark black and white, but rather in morally complex herringbone. Violence forever stalks the margins of the story, and we are privy to situations that that are both raw and beautiful, though always expressing the complexities of the human heart.

By Gaslight kicks off in London, in February 1885: A woman's battered head has washed up on the bank of the Thames. She is identified as Charlotte Reckitt, a longtime member of the "flash scene," the city's teeming underground of shills, pickpockets and grifters. Still reeling from the recent death of his dominating father, 39-year-old William Pinkerton shows himself as something of a brute with heart. He's Jo Nesbo's Harry Hole for the gaslight era, embodying the requisite triad of character-defining traits for the postmodern detective hero: world weariness, barely controlled machismo and an aching, underlying sensitivity. And his grandiose reputation spans the globe. "In America there was not a thief who did not fear him. By his own measure he feared no man living and only one man dead and that man was his father."

Not surprisingly for a poet turned fiction writer, Price clearly relishes his words: "costermongers in the mists" and "the shout of a patterer trotting along behind," or "picking out oakum with a spike."

William's abraded knuckles never quite heal, since he always seems to be fresh off of pummeling someone. He encounters Charlotte's severed head while following the spoor of the ominously named Edward Shade, who had long been a violent mote in eye of Pinkerton senior. Also in the mix is Adam Foole, a dapper crook with penetrating violet eyes and a traumatic childhood. Other over the top characters in By Gaslight include a kindly if bestial manservant named Japheth Fludd and a sure-fingered slip of a thief, Molly, whom Foole has adopted into his ring of criminals. All have a dark side, all keep close a multitude of secrets — and most sport names that Anthony Trollope would be proud of.

Set primarily in Victorian London, with side trips to the American Civil War and to the diamond mines of South Africa, By Gaslight is aimed directly at fans of historical noir fiction. A pulpy séance, the impossible theft of a famous painting and an early hot-air balloon ride over battlefield gore offer the kind of set-pieces that show off Price's talent for fantastical detail. Who knew a fortune could be made in ostrich feathers, as one character does here?

Not surprisingly for a poet turned fiction writer, Price clearly relishes his words: "costermongers in the mists" and "the shout of a patterer trotting along behind," or "picking out oakum with a spike." The specialty of the house is gorgeous descriptions, with fog, rain and frost repeatedly evoked to set the scene. "The rain deepened. A hansom took him languidly through the wet and the chill and he watched the horse's wet haunches slide luminous in the sheeted water. He felt the shake of water from the reins passing through their guides, heard the crunch and splash of wheels on the stone streets."

A Scotland Yard inspector describes William as a "notorious American detective turned vigilante." He packs a punch that is just as lethal, in its way, as one from the more restrained Sherlock Holmes, and By Gaslight can be seen as Arthur Conan Doyle by way of Dickens by way of Faulkner. Intense, London-centric, threaded through with a melancholy brilliance, it is an extravagant novel that takes inspiration from the classics and yet remains wholly itself.