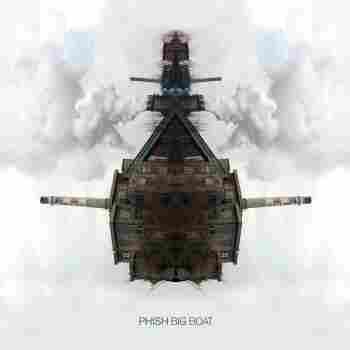 In a run spanning more than 30 years, Phish has become one of rock's all-time great touring bands, thanks to dynamic live performances full of lengthy improvisations and whimsical antics. But even with 1,600-plus shows under its belt since the 1980s, the Vermont quartet still has detractors, including those who point to Phish's uneven discography. Fair or not, it's true that the group's studio output is a different beast next to countless hours of live recordings. But for casual listeners, a new album provides a jumping-on point and an opportunity to re-engage with concise songs. And for certain concert-going diehards, it's a teaser: Those songs serve as a launchpad for future jams. But what does a new Phish record mean for the band's members — Trey Anastasio, Page McConnell, Mike Gordon and Jon Fishman? For Phish's 13th album, Big Boat, it's simply a document of where the band is in 2016.

Recorded in Nashville, New York and the band's home studio, The Barn, in Vermont, Big Boat was produced with Bob Ezrin — who also successfully helmed the group's best record since the '90s, 2014's Fuego, thanks to a balanced ear for Phish's on-stage exuberance and sonic cohesion. In many ways, Big Boat feels like a tonal sequel, presenting another batch of straight-ahead rockers tinted with elements of gospel and blues ("No Men In No Man's Land") or dark funk ("Waking Up Dead"). Phish shows off a few new genre-blending shades, too, including the uplifting zydeco-flavored groove of "Blaze On," the scorching feedback of Fishman's rallying cry "Friends," and the effervescent synths and electronic beats of McConnell's "I Always Wanted It This Way." Present as ever is the musical prowess and chemistry between members: the way Fishman's versatile drumming locks in with Gordon's buoyant bass, which also functions as melodic counterpoint; or the way McConnell's army of keyboards and flutters of piano notes provide a bed for Anastasio's blistering guitar solos, fevered riffs and subtle, dexterous precision.

What has changed this time out is the directness of Phish's lyrics. In the past, the band (along with longtime co-lyricist Tom Marshall) often relied on zany, imaginative wordplay — or fashioned fantastical mythologies — that treated words and syllables as rhythms that ping off the tongue, yet favor cryptic absurdity. But for Big Boat, Ezrin reportedly challenged the band members to share more of themselves in their songs, resulting in expressions of sadness, anger and earnest positivity as well as themes of aging and mortality, internal angst and desire for social change. Phish sounds most personal in the ballad "Miss You," wherein Anastasio mourns the loss of someone close to him, singing, "You're in the faces of people I see on the street / You're everywhere." And elsewhere, in "Home," McConnell describes his restlessness after a lifetime in motion: "My problem was I'd barely slow down, but found myself back at my home," he sings before the song erupts into an epically messy squall.

Big Boat features frequent references to religion and darkness that evoke a sense of feeling overwhelmed and lost; along the way, allusions to water suggest spiritual searching and emotional rebirth. "Breath And Burning," with its soulful horns and breezy Latin vibe, combats looming end times with a celebration of life: "And what does it matter that the end's in sight / We're not going gently, we're gonna rage with Page at the dying of the light." In the stirring gospel blues "Tide Turns," Anastasio offers relief and community to those in need of salvation from loneliness or depression: "When the wolf is at your door, and the mirror holds your nightmare ... Together we can make it through, we've got time." "More" is another affirming anthem for those stuck in a "world gone mad," as it crests with the singalong chant, "There's gotta be something more than this."

Like any Phish album, it's easy to try to predict how songs will slot into a set list, and those who caught the band road-testing new material during its recent tour will already know which are ripe for jamming. One song with that potential is "Petrichor," a 13-minute opus akin to beloved multi-part compositions like "You Enjoy Myself" or "Divided Sky." The song — which originally premiered as an orchestral work by Anastasio and the Oregon Symphony in 2014, but which has now been rearranged — is a maze of intricate arpeggios and gorgeous instrumental passages that will no doubt soar in amphitheaters.

Outside of that ambitious closing piece, Big Boat feels less musically adventurous than many previous Phish records. But its simpler songcraft is purposeful in the way it provides a glimpse inside the heads of Anastasio, McConnell, Gordon and Fishman. After years of revealing itself through flurries of notes, hypnotic grooves and exploratory improvisations that often masked deeper meaning, Phish now seems most engaged when singing from the heart.