Accessibility links
Review: Shovels & Rope, 'Little Seeds' Parenthood gives the husband-and-wife Americana duo the will to rock on an album that's informed by both birth and death. 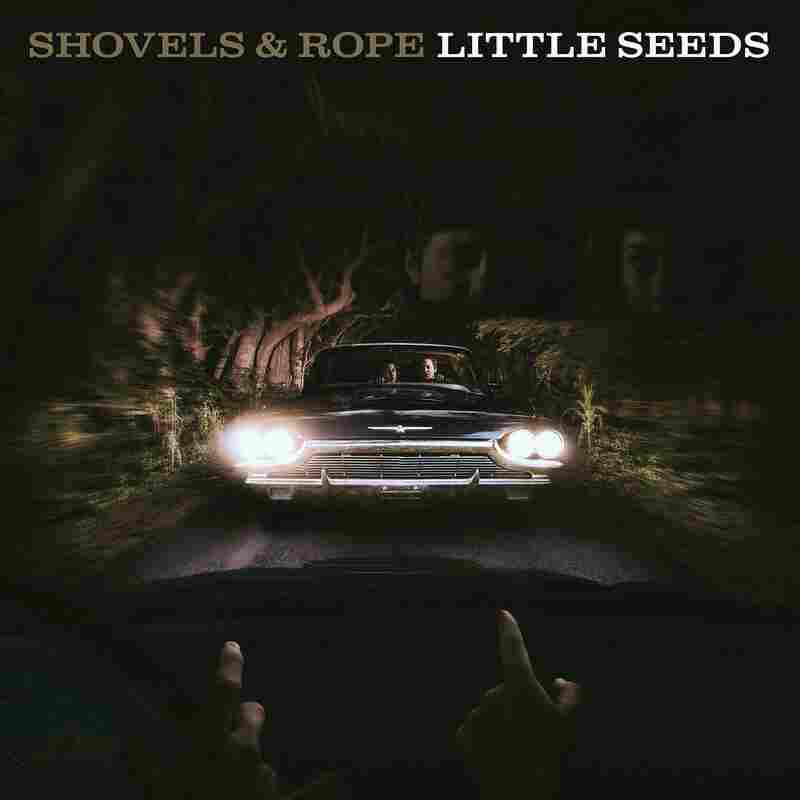 As partners in marriage and in the rootsy duo Shovels & Rope, Cary Ann Hearst and Michael Trent used to think there was no way their worlds could get any more intertwined. Then they had a kid.

Hearst and Trent have spent the last few years establishing themselves among the premier practitioners of Americana, and they've done it as a cottage industry, writing, recording and performing everything themselves and hitting the road as a self-contained band, passing guitars and percussion back and forth onstage like a pair of expert jugglers.

Before recording their latest album, Little Seeds, the pair passed into an even deeper level of collaboration by becoming parents. It's the sort of thing that can make or break a husband-and-wife band, and fortunately, it's had the effect of making their music sound more like the product of one person than ever before. (Their sound was pretty seamlessly unified to begin with.)

Surprisingly for a couple who cut their album at home, having to tiptoe around the wee one's slumber sessions helped them produce their most unabashedly rocking record so far. Hearst and Trent have always known how to bash it out when the mood struck, but their previous albums were dominated by more of a back-porch folk feel, and even the occasional rockers were rooted in blues.

It's obvious from the outset that parenthood has only increased the duo's desire to rock. The opening track, "I Know," is a crunching tune that's awash in overdrive, as Hearst and Trent disassemble the façade of an unnamed musical dilettante brick by brick. Sonically, the track has more in common with T. Rex than with anything on the Americana charts. "Botched Execution" is equally relentless, though it's driven more by the rapid-fire lyrics — about a convicted killer on the run — than by guitar riffs. The duo depends more on junkyard percussion than a conventional drum kit for its beats, which makes the rhythmic momentum all the more impressive.

In "Invisible Man," the duo takes a decidedly dark lyrical inspiration — the onset of Alzheimer's disease for Trent's father — and turns it into one of the record's most raucous tunes, coming off like a collision between The Black Keys and The White Stripes. But Trent and Hearst haven't abandoned their roots on Little Seeds, either; there are still plenty of reflective, folk-flavored moments here.

Quiet mandolin picking opens "St. Anne's Parade," a graceful ballad without percussion. "Mourning Song," another track to address Trent's father's illness, is a sad, stately tune edged along by acoustic-guitar strumming and piano. "Missionary Ridge" is probably the most overtly folk-inflected song on Little Seeds, with just a mandolin and an acoustic guitar to frame the tale of the famous 1863 Civil War battle in Chattanooga.

But while the album — or, at the very least, the duo's state of mind while making it — was significantly informed by the birth of Hearst and Trent's child, the end of Little Seeds deals with death. "BWYR," the record's most unconventional track, responds to the 2015 massacre of nine people in a Charleston church. Hearst and Trent make their home in South Carolina, and the tragedy hit home hard. The song's title stands for "Black White Yellow Red," and in a dramatic Sprechgesang, Hearst and Trent detail the ways in which people of all ethnic backgrounds are diminished by racially motivated violence.

Even closer to home, as Shovels & Rope wrapped up work on Little Seeds, Hearst and Trent lost a friend. They decided to dedicate the album's final track, "This Ride," to his memory. It's a bittersweet musing on life's rocky roads, and it's preceded on the album by a candid recording of a conversation in which their late friend related the colorful tale of being born in the back of a police car. From birth to death and back to birth again, Hearst and Trent take us through the entire cycle of life on Little Seeds. Now that they're more immersed in their own family life than ever before, their take on the entire journey resonates that much more deeply.