Accessibility links
Old West Gunslinging Meets Futuristic Androids In HBO's 'Westworld' HBO's latest series is a high-tech theme park, whose visitors get to live out their wildest dreams of being in the Old West. Critic John Powers calls Westworld an "unexpectedly resonant show." 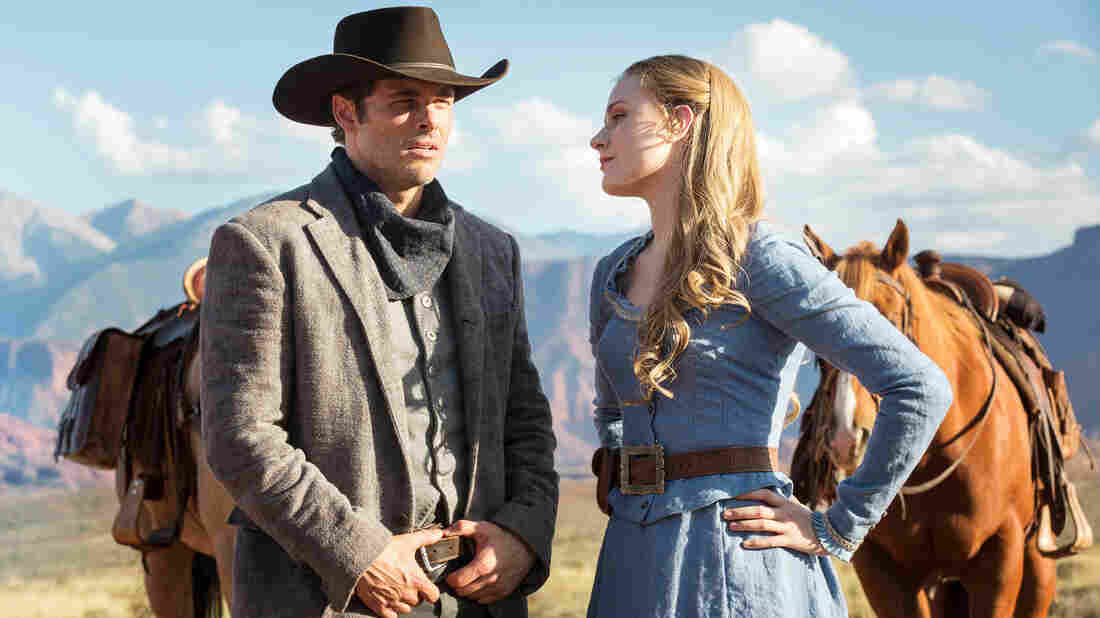 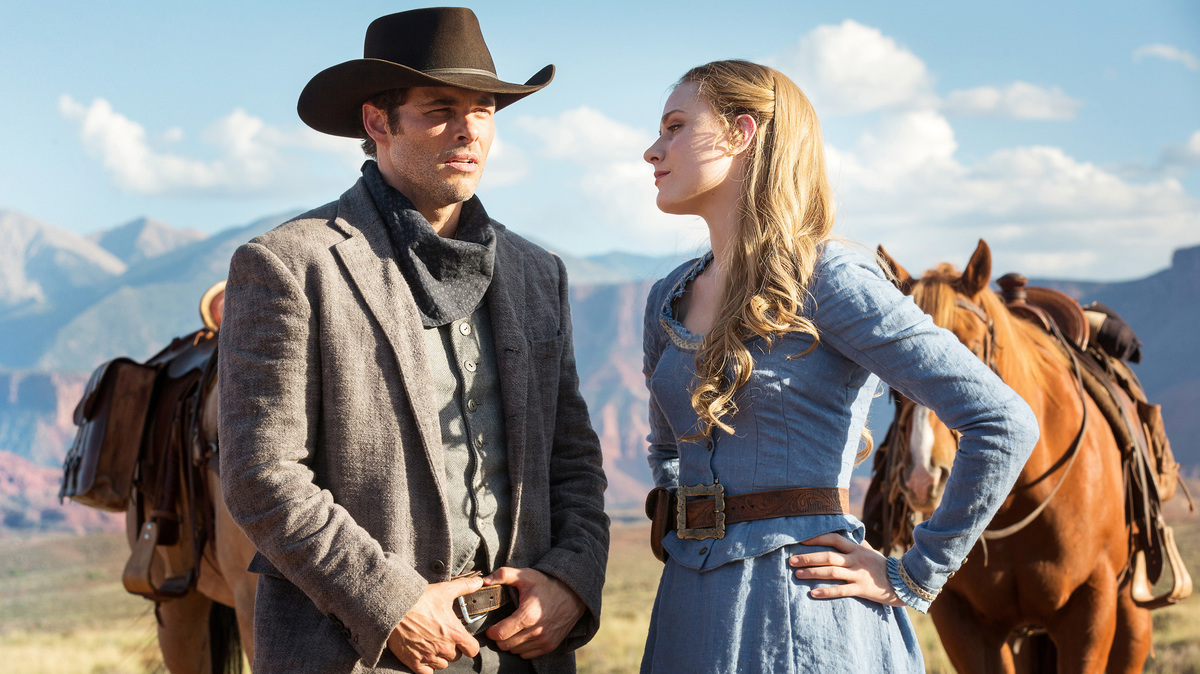 James Marsden plays a tourist and Evan Rachel Wood is a rancher's daughter in the HBO series Westworld, which premieres Sunday at 9 p.m. ET.

I have a friend in London who's at war with her car's GPS. Although she nearly always puts it on, she's driven mad by its voice, which is female, and refuses to follow its directions. She spends whole trips arguing with, barking at, and sometimes cursing this imaginary woman. She'd never be this rude to an actual human being. But, of course, a GPS doesn't have feelings.

But what if it did? That's one of the many timely questions raised by Westworld, the darkly exciting new series that's HBO's biggest gamble since Game of Thrones.

Developed by Jonathan Nolan and Lisa Joy, it's an ambitious reboot — and rethink — of the clever but clunky 1973 movie by Michael Crichton, who would go on to write the more popular but less provocative Jurassic Park.

The show takes its title from the name of a futuristic theme park where visitors come to live out their Wild West fantasies. Inhabited by astonishingly life-like androids known as "hosts," Westworld lets guests ride the high-country, gun down an outlaw, fall for a cowboy or bed a beautiful bar-girl — all with no risk.

Meanwhile behind the scenes, the park is run by a huge team topped by its genius creator, Dr. Robert Ford, played by Anthony Hopkins, its lead programmer Bernard Lowe — that's Jeffrey Wright — and tough Theresa Cullen, who represents corporate, which has sinister plans of its own. She's played by Sidse Babbett Knudsen from Borgen.

Everything goes smoothly until there's a glitch in the androids' operating system. Triggered by an apt line from Romeo and Juliet – "these violent delights have violent ends" — some of the hosts begin acting out in nasty ways. Not to give anything away, but this makes matters tricky for everyone from Westworld's management to a scary, ultra-violent repeat guest known as Gunslinger — that's Ed Harris of the chilling blue eyes.

At the center of the action are William, a nice-guy tourist played by Jimmi Simpson, and the show's heroine, Dolores Abernathy. Brilliantly played by Evan Rachel Wood, she's a rancher's daughter who discovers that life is a lot more complicated than she ever realized.

the series asks us to think about our relationship to technology ... What if we create beings that can grow beyond our ability to know and control them?

As you might guess, the series asks us to think about our relationship to technology, in particular to machines that come ever closer to displaying human intelligence and emotions, as the android hosts do here. After all, it's one thing for a techno-genie to satisfy our needs; quite another for it to have needs of its own. What if we create beings that can grow beyond our ability to know and control them?

In Crichton's original film, the human heroes are threatened by run-a-mok androids. This new version flips that idea, conjuring a reality in which the androids are abused by human beings. It joins a long tradition that sympathizes with man-made creatures like Boris Karloff's Frankenstein, who was as touching as he was scary. And it joins movies like Blade Runner and the recent Ex Machina in suggesting that fabricated creatures may be smarter, more passionate and indeed more profoundly alive than the people who made and enslaved them.

At bottom, this unexpectedly resonant show isn't really about technology but about the human soul, whose operating system has a glitch that some call Original Sin. Watching Westworld's guests exploit the hosts for their many different pleasures, I found myself thinking about tourism in our own world, where travelers often treat foreign lands as theme parks and locals as disposable extras — think of Ryan Lochte in Rio — or even worse, visit "exotic" countries to buy easy, cheap sex or slaughter their animals for sport. Bursting with violent delights and violent ends, Westworld is shot through with a melancholy truth, that nothing is more human than behaving inhumanly.