Accessibility links
Hear Gillian Welch's Unreleased 'Dry Town' From A Collection Of Demos Welch celebrates Revival's 20th anniversary with a two-disc set of unreleased songs. "I have always learned more from other artists' imperfect works than from their masterpieces," she says. 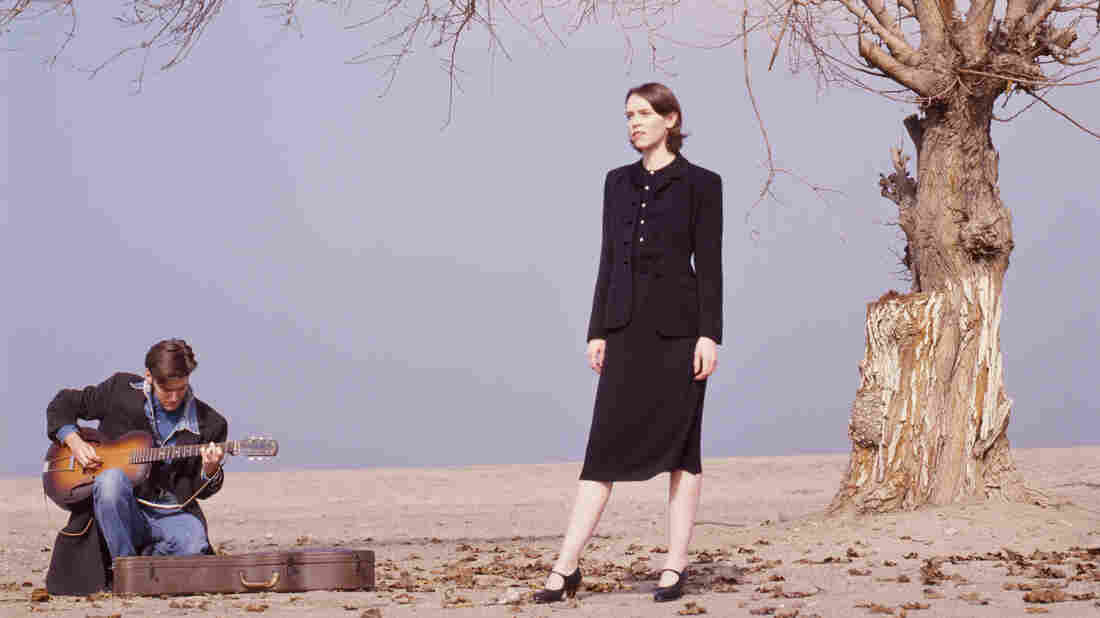 "Some of these songs didn't belong on a first record, but it doesn't mean they're not good songs," says Gillian Welch. John Patrick Salisbury/Courtesy of the artist hide caption 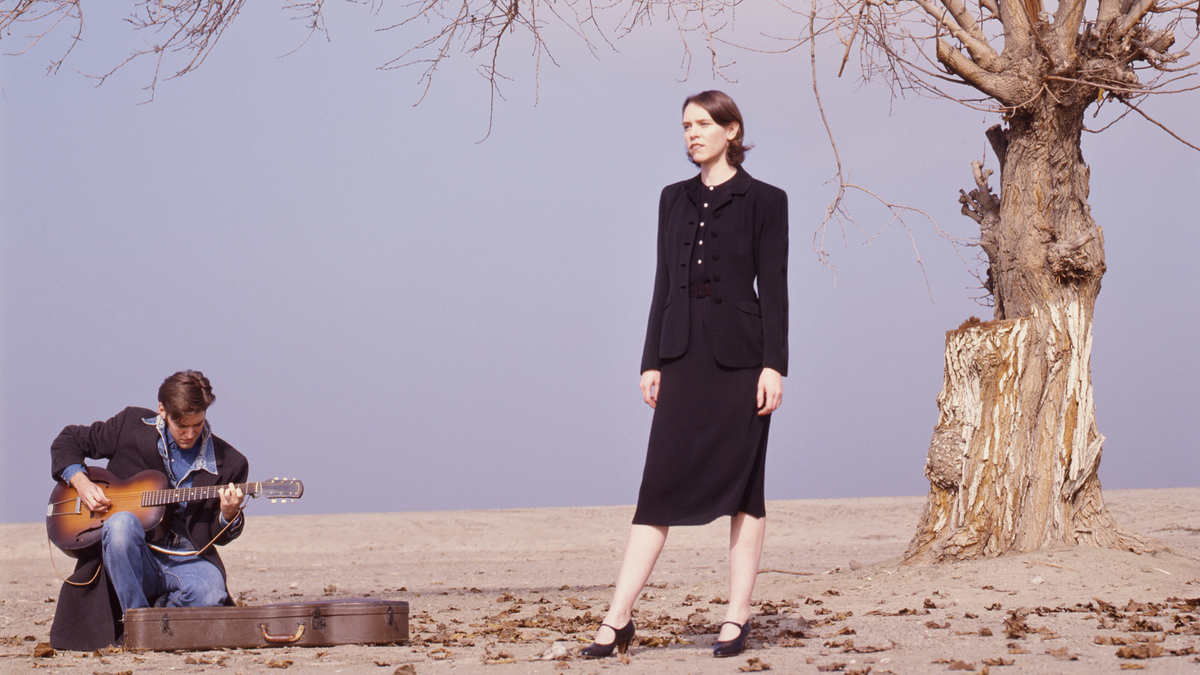 "Some of these songs didn't belong on a first record, but it doesn't mean they're not good songs," says Gillian Welch.

John Patrick Salisbury/Courtesy of the artist

Ponder for a moment the intensity of devotion that Gillian Welch has commanded among a certain highbrow listenership for the better part of two decades. She and her musical partner Dave Rawlings — who perform together under her name — have become archetypes of entrancingly austere, two-voiced artistry. From their 1996 debut album Revival on, the rawboned refinement of their songwriting, the comely and lilting crooks in Welch's phrasing, the shimmery dissonance of their harmonies and the prickly, surging ecstasy of Rawlings' guitar runs have set an impossibly high bar for the acoustic duos that have come along in their wake. Just to put things in perspective, when the pace of Welch's albums slowed to a halt during the early 2000s, one of the largest newspapers in the U.K., The Guardian, published not one, but two separate pieces fretting over her extended studio silence.

From the start, the topic of Welch's background and musical formation has been a subject of fascination — how someone raised on the West Coast by entertainment industry insiders, then educated at Berklee College of Music, came to develop such dedication to and mastery of rustic musical traditions.

Longtime followers will likely rejoice that she and Rawlings are marking Revival's 20th anniversary with Boots No. 1: The Official Revival Bootleg, a two-disc set that boasts a number of unreleased songs and early recordings. It's a chance to eavesdrop as Welch and Rawlings try on the looser-limbed templates of performers they admire, get a feel for how to fit their own instruments together and flesh out the musical identity they want to present to the world. As studious as they were in their days as anonymous, young musicians, there's proof here of the ingenuity and even playfulness with which they approached the process of refining their sound.

For instance, in "Dry Town" — a Welch and Rawlings number that has only appeared on albums by Nitty Gritty Dirt Band and Miranda Lambert until now — Welch is in wry, Johnny Cash-like talking-blues mode. And at the end of "I Don't Want To Go Downtown," Welch's never-released response to a favorite Robert Earl Keen number, Rawlings can be heard offering an assessment that also applies to the body of work they've accumulated since: "Well, there's something in there."

Jewly Hight: It's a marvelous thing for listeners that you're plundering the vaults, and that the material you're releasing includes songwriting demos and early versions of songs — recordings that capture the two of you working out arrangements, refining your aesthetic and occasionally leaning on influences. On the other hand, you and Dave Rawlings have always been admired for the completeness of your aesthetic vision and the meticulousness you bring to writing and recording. What's at stake for you in allowing us these glimpses into how you fashioned yourselves into the artists that we know?

Gillian Welch: There's no denying that it's difficult for us to put stuff out into the world that may not be, as you say, as meticulous as we'd have it, but the 20-year time gap makes it easier. I'm also aware that I have always learned more from other artists' imperfect works than from their masterpieces. The glimpse behind the curtain can be illuminating. There are songs and recordings here that were left off of Revival not necessarily because of their quality, but because of their personality and what it means to put out your first record. It's like, "Hello, my name is Gillian Welch and this is me." Some of these songs didn't belong on a first record, but it doesn't mean they're not good songs.

One thing that stood out to me — especially when I heard the alternate version of "Pass You By," along with "Georgia Road," "455 Rocket" and "Dry Town" — was the way you were playing with different approaches to singing than we've become accustomed to hearing from you — playing with rhythmically looser phrasing and a harder-swinging delivery. What do you hear when you listen back to those performances?

I hear that I'd been singing in a lot of noisy Nashville bars! And, not surprisingly, l hear my influences, less veiled and less metabolized. I hear a lot of Robert Earl Keen in my singing and phrasing, and the humor in there. Other people too ... Johnny Cash ... maybe a little Randy Newman even. Mostly I hear experimentation, trial and error. Remember I had barely recorded before this. I hadn't really settled into my own voice so much, yet. That was one of the most profound things T-Bone [Burnett] helped with as a producer. He wanted to make sure the world was introduced to me as an artist, not just as a songwriter, so he took great care to help us focus on the songs that were the most me.

I recently saw you and Dave perform during the tribute to the late, great Guy Clark at the Ryman Auditorium, during which an array of Clark's peers, admirers and collaborators, as well as artists who'd recorded his material, offered their own renditions of songs from his four decades' worth of albums. You've now crossed the 20-year mark with Revival yourselves. What's your relationship to the idea of legacy at this point in your careers?

I don't think about legacy, per se, though I am very grateful that I still have a job after 20 years. It's one of the great mysteries, that despite our non-commercial recipe and geologically-paced releases, we somehow have an audience that cares and is paying attention to our work. It's a great honor, really.

When Revival came out, much of the writing about it identified a central paradox: Many journalists associated the music you were making with primitive, old-timey sensibilities, but at the same time couldn't deny that the album was the work of highly sophisticated musical imaginations. How important has it been to you to subvert simplistic perceptions of pre-electric music?

Ha ha. Well that's a great word ... subvert. I may well be a quiet subversive. Art is where you make manifest your deepest beliefs and thoughts. I'm a very stubborn person, a very independent person. Sometimes I think I value freedom above all other things, especially as an artist. I just won't let anyone else tell me what I am or am not allowed to create. That's not an acceptable way to make art.

Boots No. 1: The Official Revival Bootleg comes out Nov. 25 on Acony.