Accessibility links
'Cruel Beautiful World' Was Inspired By Two Haunting Relationships Before novelist Caroline Leavitt started dating a controlling boyfriend, she had tragically lost a friend to one. She says writing her new book was "a way for me to forgive myself." 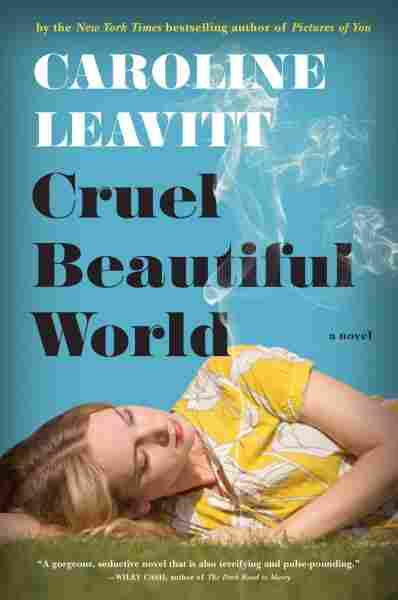 Caroline Leavitt's latest novel, Cruel Beautiful World, is about coming-of-age in 1969; it's about wild love, rebellion and finding oneself in the time of Woodstock and the Manson murders.

The story follows 16-year-old Lucy Gold, who runs away with her English teacher, William, to the wilds of Pennsylvania. Lucy leaves behind a big sister and the aunt who raised them after their parents died. As she and William try to build a new home for themselves, William becomes more and more controlling.

Leavitt tells NPR's Scott Simon that the book comes from both a personal place and her imagination. "I get haunted by something and then I want to write about it, and it sort of pulls its way out," she says.

On the real-life tragedy that inspired the book

I've been obsessed with this book since I was 17. I sat beside this girl in study hall and she was telling me how she was engaged to a much older guy who was a little controlling. And I didn't really understand that.

A year after I got out of high school, I heard the news: She had broken up with him and he had stabbed her to death. And it just haunted me. I couldn't figure out if she had been with him for so long why didn't she see signs that he might be violent? How did somebody stay with somebody like that, who was controlling? And it wasn't until four years ago ... that I happened to see a posting from my high school friend's sister, who was still obsessed with the crime and what had happened. And there were all these unanswered questions. And as soon as I saw that, I thought, Oh, I have my story.

About 10 years after my high school friend died, my fiancé died very suddenly, two weeks before our wedding. And I was just cataclysmic with grief. So I got it in my head that the only way to get over the grief would be to get involved with another person right away. ... So my friends told me it was a terrible idea; my grief counselor said if I did it she wouldn't treat me. And I said, "I don't care. I can't grieve anymore." It was just too hard.

So the boyfriend I chose — it was OK at first. ... And then he started to monitor my food. I was 100 pounds and he kept telling me — always in this very sweet, soft, gentle voice — "Honey, you really could lose another 10 pounds. It would be so great for both of us." He didn't want me to see my friends. He didn't want me to see his friends because he thought I was flirting with them. And the final straw was when I went to look at a novel I was writing and I noticed that a whole chapter was missing and it was replaced by this very weird chapter. And it had Groucho Marx jokes in it and it was strange and not well-written. And when I turned to him, he looked at me and said, "It's better, right?" And we had an argument about it, and I kept saying, "It's mine. It's my work. You didn't even ask permission." And he said, "Well, you and I are the same person. So what's yours is mine; what's mine is yours." And that's when I understood my high school friend. And that's when I got free of the relationship and I began to think more and more about how do you recognize control?

On the inspiration for Iris, Lucy's widowed, octogenarian aunt

I have to tell you Iris is really an homage to my mom. My mom is 99 years old now. She had a terrible marriage; my father died when he was 50. She didn't want anything to do with men ever again. Hated my boyfriends; hated my sister's husband. And then when she was 90 she couldn't stay in her house anymore so we had to put her into one of these independent living places. And she was not happy: She would call me every night and yell at me.

About a month later she called me up and she was ridiculously happy, and she said, "I've fallen in love for the first time in my life." And I went to visit her and Walter, her boyfriend, who was charming and smart. They were like teenagers, they were holding hands. They were together four years.

The more I was writing it the more I understood about what was happening. ... What happened to my friend and how sad it was that there was no one there to help her. And, I mean, when I was in my controlling relationship there were people to help me but I just didn't want to listen to them. But it was a way for me to forgive myself and say, "Well, at least I got out."