Accessibility links
Sheriff Joe Arpaio's Bid For Re-Election Is One Of the Priciest Local Races In The Country One of the country's most expensive races for local office is in Arizona's Maricopa County, where Sheriff Joe Arpaio, a noted opponent of illegal immigration, has the toughest challenge of his career. 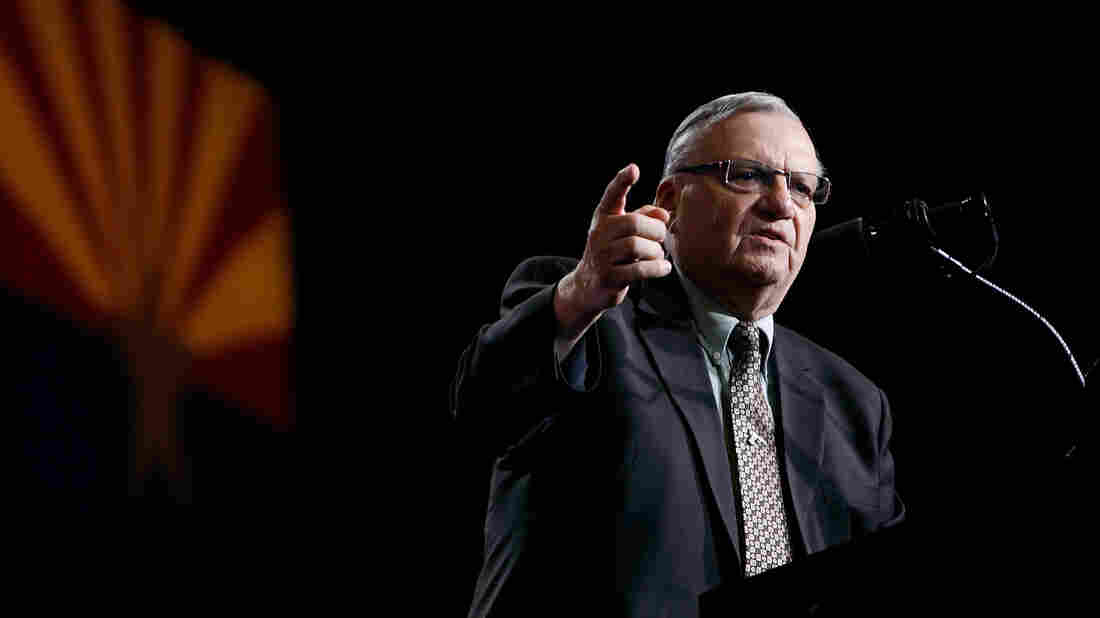 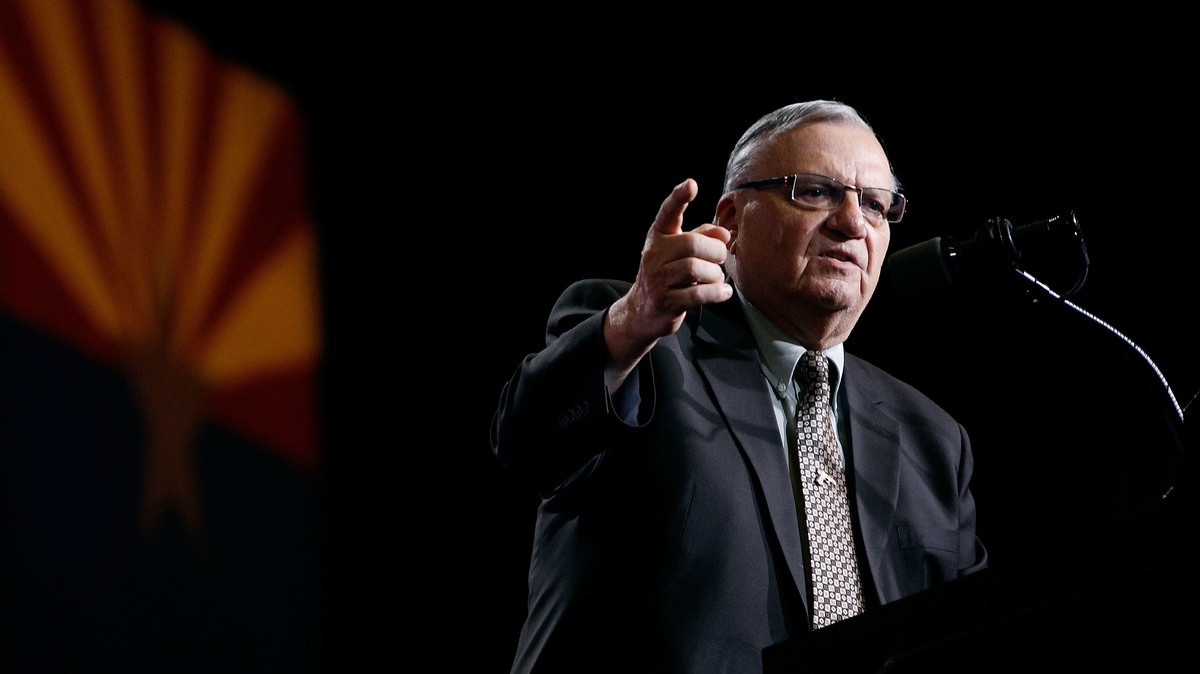 Most races for sheriff are low-profile, relatively low-budget affairs. Not so in Arizona's Maricopa County, where Sheriff Joe Arpaio is running for his seventh term.

He's known nationally for his hard-line stance on illegal immigration. Arpaio's base all over the country has helped him raise a stunning $12 million for his re-election campaign, making it one of the most expensive races for local office in the country this year.

Rock Star Among His Base

At a recent Tea Party meeting outside Phoenix, Joe Arpaio got a rock star reception as he entered the room of mostly white senior citizens.

He's beloved by these constituents for leading the state's efforts to crackdown on illegal immigration and for his loud and proud support of GOP presidential candidate Donald Trump.

There's a raffle prize of an autographed pair of the pink boxer shorts Arpaio makes his inmates wear. The winners, Sue and A.J. Stock, proudly promised to frame the underwear and display the pair in their living room.

Arpaio has been in office nearly 24 years and the Stocks are rooting for Arpaio to win a seventh term at the age of 84.

The Issues: How Clinton And Trump Come Down On Law And Order

"Sheriff Joe, they say, 'Well, he is too old,' " A.J. Stock said. "If he was 150 years old, he is going to do more good, he knows how to get the job done. And for anyone else to catch up to what he knows now, it is gonna take for forever. If he was in a wheelchair on oxygen, he is going to do a better job."

Arpaio has already raised and spent more than Arizona Gov. Doug Ducey did for his race two years ago. That will allow the sheriff to flood the airwaves with television advertising.

One of his attack ads about his opponent, Democrat Paul Penzone, has prompted the Penzone campaign to file a defamation lawsuit against Arpaio.

At this appearance with the Tea Party group, Arpaio vowed to keep investigating President Barack Obama's birth certificate. He also mentioned liberal billionaire George Soros is spending money in an effort to get him out of office.

"It is not because they love somebody else; they just don't like me," Arpaio said.

Soros is backing a group called Maricopa Strong, which has sent fliers to voters attacking the sheriff for failing to investigate sex crimes and for his legal troubles.

One flier from Maricopa Strong says, "Joe Arpaio: using our money to clean up his messes instead of keeping us safe."

For the first time in recent memory, polls show Arpaio in danger of losing. An Arizona Republic/Morrison/Cronkite News poll in mid-August found 57 percent of respondents had an unfavorable view of the sheriff.

I would love to get to the Latino community and talk to them. It is very difficult. Some of them think I am the devil and all that. I am a nice guy. If I can get to talk to them, hey, I will swing them my way.

"We are feeling really good, the energy behind this campaign has picked up immensely," Willems said in a phone interview.

At the same Tea Party event, Arpaio acknowledged a weakness in his campaign.

"One of my problems I've had — I haven't been able to rectify it — I would love to get to the Latino community and talk to them," Arpaio said in an interview after his public remarks. "It is very difficult. Some of them think I am the devil and all that. I am a nice guy. If I can get to talk to them, hey, I will swing them my way."

The Latino electorate is growing in Maricopa County. Trump's presence on the ballot has energized expectations that Latinos will turn out to vote against him, though some Latino voters say they are even more eager to cast a ballot against the sheriff.

In a heavily Latino neighborhood in south Phoenix, 22-year-old Maria Castro is going door to door, urging minority and young voters to turn out against Arpaio.

"We've had enough of living in fear, and our people aren't scared anymore," Castro said.

Arpaio has been in office Castro's entire life. She is a paid canvasser with the Bazta Arpaio campaign, which is named for the Spanish word basta that means "enough" — though spelled to include the AZ abbreviation for Arizona.

Castro passes out fliers with photographs of Arpaio and Trump together, encouraging voters to vote against both men. It includes the words, "Your vote can end Arpaio's reign and prevent Trump's rise."

This work is personal for Castro. Her mother is from Mexico and doesn't have legal status. Arpaio used to arrest immigrants working without papers in worksite raids, which convinced the family that it wasn't safe for Castro's mother to work.

"I'm the main breadwinner in my household and I'm doing this, because I know that's a really real fear — like my mom has been taken from us before and I don't want that to happen again," Castro said.

She doesn't tell voters anything about Arpaio's opponent, Penzone, and many people she meets don't seem to know his name. But Penzone is surely benefitting from all this anti-Arpaio organizing.

It shouldn't be that I go to another place in the country or outside the country and they know who our sheriff is. And it's for all the wrong reasons, and that's what is even more disturbing.

"That's not a common thing you see in law enforcement where a leader has just disappointed the constituents that aggressively," Penzone said of the effort.

Penzone is a former Phoenix police sergeant who ran against the sheriff four years ago and lost by six points in a three-way race. This year, he is Arpaio's sole challenger. He knows he won't be able to come close to Arpaio's fundraising — so far he has raised $540,000 — but he is hoping county voters are ready for a new sheriff.

Penzone said there is a need for law enforcement that protects the community, not a celebrity who entertains it.

"It shouldn't be that I go to another place in the country or outside the country and they know who our sheriff is," Penzone said. "And it's for all the wrong reasons, and that's what is even more disturbing."