Accessibility links
Psychologist Helps San Quentin Prisoners Find Freedom Through Self-Reflection Since the mid-1990s Jacques Verduin has been implementing programs that have had a high success rate in helping reform convicts. But the journey isn't easy — and requires courage and vulnerability. 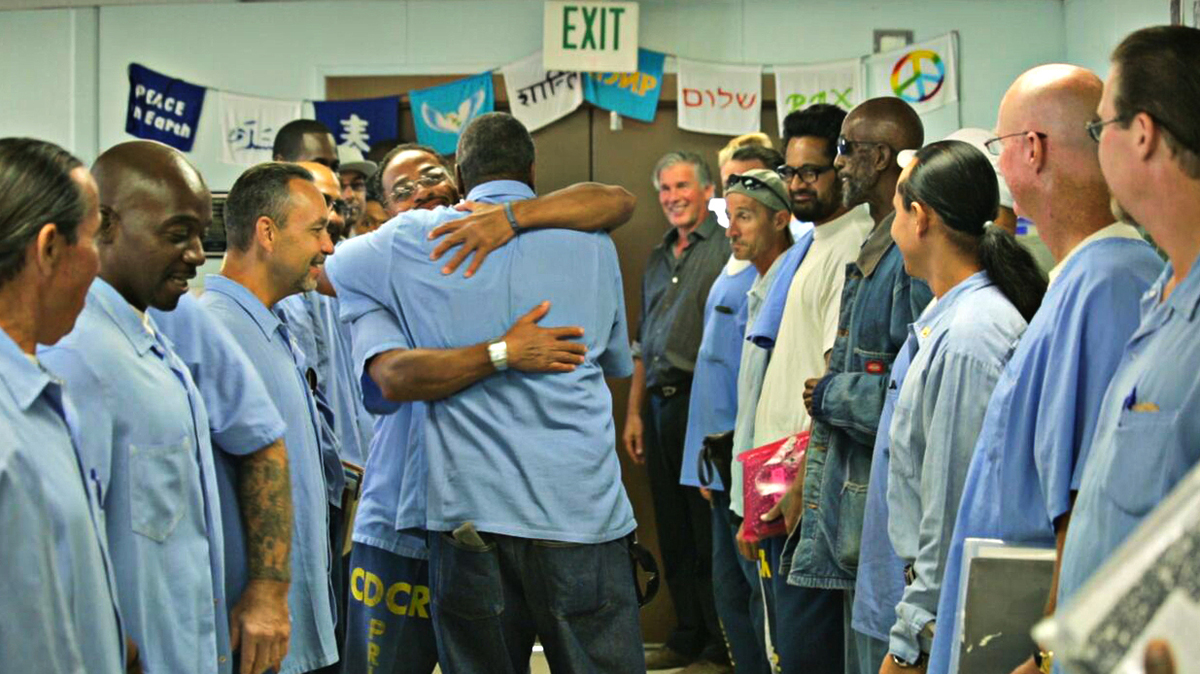 Participants in Project GRIP celebrate one man's release. Through the yearlong course, prisoners are taught how to confront and deal with what got them into prison in the first place.

Jacques Verduin knows most of the men in San Quentin by name. And he's trying to make sure that when they leave the California state prison, just across the San Francisco Bay in Marin County, they don't ever come back.

Verduin — a tanned man with silver hair, in his mid-50s — has been running rehabilitation programs inside San Quentin for two decades. All it takes is a visit to one of his classes, offered once a week for an hour, to see he's doing something different. 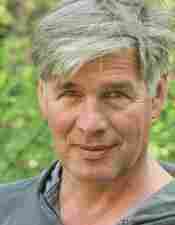 "Life, particularly if you're upset — things happen very quickly. That's when that moment of regret happens afterwards," he tells his students during one session. He tells them that breathing can help diffuse the moments that can turn into violence.

The nonprofit program, called GRIP, or Guiding Rage into Power, runs for 52 weeks. In the third week of class, the group gets a pretty simple but important homework assignment: Write down why you're here and what you want out of this whole thing. One by one they stand up and read their answers.

"I'm here in GRIP to receive and gain some insight about myself and the crimes I've committed," says one man, named Darrell.

Another, named Noah, says he's there "because all the cool kids are doing it. That might mean that there's something to it. If it's helped them, maybe it can help me."

Verduin explains to the group that what they're going to discover is a new kind of emotional muscle, just like the muscles they build by weightlifting in the prison yard. "Anger has an anatomy to it," he says. "It gets unbearable enough that — boom — I do something I never even thought about. But if you can learn to read it then you have some choices.

"It's like buffing out in the yard," he adds, "that's the muscle we want to build in this program."

Verduin tries to get the class to think how their bodies respond when they're angry. He asks them for recent examples. One guy talks about getting into a standoff with a guard. Another got amped up during a fight with his wife. Their temperature rises, their heartbeat speeds up — noticing those physical changes can help them diffuse the situation.

Now, you would think that these prisoners, many of them convicted murderers, hard guys who have led hard lives, would not be into the idea of meditation and self-help. But the waiting list to get into GRIP is 500 names long.

"I had to wait three years to get into this group," says Lenny Rideout, a big guy with a gap-tooth smile and two weeks in the class now under his belt. "My charges were torture and robbery."

He was arrested on his most recent charge when he was 38, but it's not his first time in the penal system. Rideout says he's been in at least two other prisons and never had access to a program like GRIP.

"You know, you go do your time and get out," he says. "You go in with no self-help, you get out with no self-help. Here, they have it available for you to get, and once you get it, it's up to you to use it."

And he says the program is helping him learn about himself.

"I'm accountable for things now. I know what empathy is. I did not use to feel it like that. Now I got so many tools in my box, man."

It's clear that Rideout and some others in the class already know how to talk the talk. They understand what parole officers want to hear — that they've changed. Lenny Rideout was denied parole a couple years ago. He's got four more years before he gets another chance to show he's different now.

The GRIP program seems to be working and is expanding throughout California. Fifty-one graduates have been released and none of them has returned to prison, even though the recidivism rate in the state is 45 percent.

Rafael Cuevas has already been through the GRIP program and thinks about his crime in a new way. "I can't find words to ... explain the gravity of the pain that I feel with what I brought to that situation. A lot of regret and a lot of guilt."

He's currently serving a sentence of 16 years to life, convicted of second-degree murder for stabbing a man to death after getting into a fight over a fender bender.

"It wasn't personal at all," he says. "It was me being very aggressive at a very bad spot in life, where I just responded to everything with violence."

Rafael is now one of the peer trainers. In one of their planning sessions, he and about a dozen other GRIP graduates debrief with Verduin about how the most recent class went. Then, they map out what they're going to do for the next class. They throw out ideas and talk about who's going to print the handouts. If you ignore the bars on the windows and the prison uniforms, these men could be college students doing a group project or a corporate team figuring out a presentation.

One guy named Upu asks the group if he can use a traditional Polynesian chant in the next class. The group loves it. They encourage each other. They have learned how to be vulnerable here.

When I met Jacques, he kept saying, 'what made you a criminal?' I just said that's the way I was born. I thought I was born to be that way. He said, 'Nah. There's more to it than that.'

When I get a chance to sit down and talk one-on-one with Verduin about how a Dutch guy ended up doing rehab work at one of America's most famous prisons — he told me a story about his father. During World War II, his dad was imprisoned in a labor camp on the border between Germany and Poland.

"We could hear him scream in his sleep at times, wrestling with trauma he had experienced," Verduin tells me. "When the Berlin Wall came down, he said, 'I want to go back.' We said, 'What?' He wanted to face his captors and make his peace."

His father did go back, and he found some of the soldiers who held him captive.

"Some of them had died, some hadn't," Verduin says. "With their families and quite without a curriculum, they spoke their pain and apologies were made and forgiveness was given. He came back around, and that made a big impression on me."

Verduin says it's difficult not to get emotionally invested in his students here. He's become a confidante and advocate for many of them, and he says he has to work on keeping boundaries.

"You don't want to get over-familiar, and if you're 20 years in, that's a real thing to watch. Because of course, just like on the outside, certain people you bond with stronger than others, you admire more or you feel connected with deeper."

One of those people is Glenn Hill. 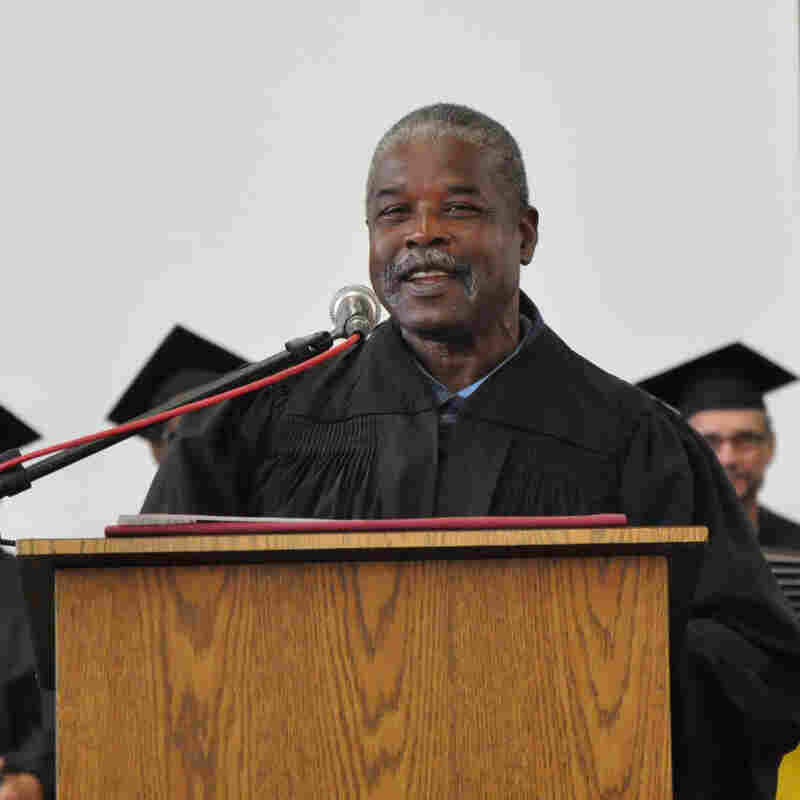 Glenn Hill speaks at the Project GRIP graduation. Hill, a GRIP graduate himself, was released from prison in May after 42 years. Courtesy of Jacques Verduin hide caption

He served more than 40 years on a conviction of first-degree murder, a charge he still denies. He was released from San Quentin this past spring. Jacques Verduin found him a subsidized house that he shares with three other former prisoners. Verduin checks in on Glen every once in a while to make sure life on the outside is going OK.

And things seem to be. He works as a janitor at a homeless shelter. He saved enough money to buy himself a aquarium, which he shows off when we visit him. He turns the overhead light off so we can see how the aquarium glows blue. He sits in a chair about three feet in front of it and stares into that light. "I just sit right here," he says, "and I just feel so free and alive right here. This is my world."

Hill tells me the first time he was arrested he was only 8 years old.

"When I met Jacques, he kept saying, 'what made you a criminal?' I just said that's the way I was born. I thought I was born to be that way. He said, 'Nah. There's more to it than that.' "

And by the time he was getting out, Hill says his sessions with Verduin had remade him. "I had been so much at peace with myself within. I was free before I got out. Even though I was locked in a cell, I was free. All that anger, frustration, guilt and shame — I got rid of all that."

The students in Jacques Verduin's newest GRIP class are still on the other side of that freedom. Before the class wraps up, Verduin reminds the prisoners that what they're embarking on is going to be hard: "It's an intense journey and it will require some courage from all of us, but it will be worth it."

Then they go around the room again. One at a time, each man says just one word that captures how he's feeling — open, thoughtful, encouraging, enthused, relieved — and then the men gather in a circle. They hold hands to close out the session. And in that moment, there is a kind of freedom.

The audio in this story was produced by Peter Breslow.

In a previous version of this story, Jacques Verduin is referred to as Danish. He is Dutch.