Accessibility links
'Wall Of Storms' Sweeps Away Your Expectations, Brilliantly Ken Liu's even more epic followup to last year's epic fantasy The Grace of Kings picks up several years after the first book, with a completely new and fascinating set of characters and conflicts.

'Wall Of Storms' Sweeps Away Your Expectations, Brilliantly

'Wall Of Storms' Sweeps Away Your Expectations, Brilliantly 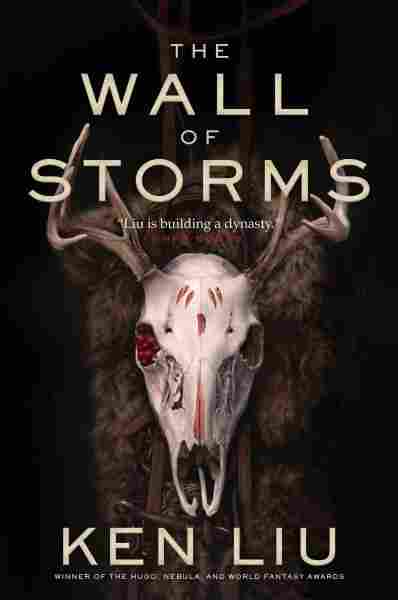 The Wall of Storms

When I reviewed Ken Liu's The Grace of Kings last year, I admired its scope and craft, especially as a debut, but remarked on the absence of women, regretting how they seemed to fall through the cracks of Liu's epic storytelling. The novel's final act seemed to promise a great deal of change on that front, and left me very curious about how Liu would handle what seemed like the obvious middle-book shift: from the masculine public of battles, feats, and nation-forging, to the feminine private of family focus and palace intrigue. I was on my guard for that kind of essentialism, for a book that would show me women aplenty in ways that only confirmed tired, if effective, stereotypes: by the end of The Grace of Kings the new Emperor has two wives, both alike in dignity, and the scene seemed set for them to wage quiet, smiling war against each other.

This is not what happens.

The Wall of Storms is an 852 page sequel to a 640 page book, so let me cut to the chase: It surpasses The Grace of Kings in every way, by every conceivable metric, and is — astonishingly — perfectly readable as a standalone. I loved it so much that I'd go so far as to say if you were intimidated by the size and scope of The Grace of Kings, you needn't wait on reading it to dive into this one. Beginning several years after The Grace of Kings concludes, the focus is chiefly on a new generation of characters and how they deal with a fierce invading force from across the ocean, beyond the fabled Wall of Storms.

'The Wall of Storms' is an 852 page sequel to a 640 page book, so let me cut to the chase: It surpasses 'The Grace of Kings' in every way, by every conceivable metric, and is — astonishingly — perfectly readable as a standalone.

Kuni Garu, now Emperor Ragin, has had three wives and four children: Timu, Théra, Phyro, and Fara. Timu and Phyro, born to queens Jia and Risana respectively, are opposites; Timu is scholarly, careful and aloof while Phyro is martial, charismatic and impulsive. Théra, Jia's daughter, combines the best of both their characters, often mediating between them and always leading their shenanigans; Fara, whose mother died in childbirth, is the youngest, still growing into her personality (and role in the narrative). On these children's individual quirks ride the fate of the empire: will Kuni Garu declare Timu his heir, alienating his nobles and former war-comrades? Will he declare Phyro his heir, alienating his civil service and first wife? Or will he do the most surprising thing, and alienate everyone?

But even articulating the plot this way is misleading, falls into the trap of clichéd expectation. This is a book focused on its women and their conflicting desires in scholarship, family, politics, philosophy; Kuni and his friends are largely relegated to the background as we watch his children grow, challenge and pick apart the myth-making from The Grace of Kings. Kuni's scholarly friend Luan Zya takes on Zomi Kidosu , the disabled daughter of fishing folk, as a student, and she and Théra are very much at the heart of this volume — their ambitions, loyalties, and skills are fully as important to the plot as the invaders who plague their land.

There was one element that didn't sit well with me, that I'm still wrestling with, and that might merit a return to the first volume to really satisfy me: I couldn't reconcile the Jia from The Grace of Kings with the Jia in The Wall of Storms. To say more is to risk spoilers, but suffice it to say that while her character is certainly more complex, and her actions more far-reaching, I had a hard time believing she'd really changed so much. But it's a pleasure and relief to see that she doesn't need to carry the weight of all womanhood on her shoulders alone, and that her role can shift and expand accordingly.

There's so much in this book. I could talk for ages about how mesmerized I was by the depiction of research and development in wartime; how happy to see same-sex desire represented with loving complexity; how riveted by plot-twists that further complicate the world Liu is building. When I said Liu was building a dynasty, I imagined his material was a single family; instead I see that time, physics, and settler-colonialism are all load-bearing elements of his epic architecture.

Kuni Garu was fond of saying, in The Grace of Kings, that he promised himself to always do the most surprising thing — and this is the organizing principle of Liu's trilogy. Having neatly set the stage for poisonous intrigue between squabbling wives, Liu lights the theatre on fire.