Neville Marriner died overnight at age 92. The Academy of St. Martin in the Fields conductor was famous for his score to the Academy Award-winning film Amadeus.

Neville Marriner, the British violinist and conductor who founded one of the world's most popular chamber orchestras, has died today in London. He was 92. One of the 20th century's most prolific recording artists, Marriner's Academy of St. Martin in the Fields is considered one of the most famous orchestras of its kind throughout the world. He's also known for conducting the soundtrack for the Academy Award-winning classic "Amadeus." Jeff Lunden has this appreciation.

JEFF LUNDEN, BYLINE: With more than 300 recordings to his credit, Marriner was one of the most influential interpreters of baroque, classical and early romantic music in the mid to late 20th century, says Tim Page professor of journalism and music at USC.

TIM PAGE: Whenever I think of Neville Marriner, I think of an old cartoon that ran in hi-fi stereo review in the late '60s or early '70s. And it was this man sitting down next to his radio and out of the radio it said and we've just heard a recording by the Academy of St. Martin in the Fields. And there's a parrot over in the corner, and the parrot says conducted by Neville Marriner. I mean, he was one of the most prolific of all recording artists from that time.

(SOUNDBITE OF NEVILLE MARRINER AND ACADEMY OF ST. MARTIN IN THE FIELDS PERFORMANCE OF ROSSINI'S "IL BARBIERE DI SIVIGLIA")

LUNDEN: Marriner was born in Lincoln, England, in 1924 and began his career as a violinist. While playing in the London Symphony Orchestra, he and some other string players formed a chamber ensemble which performed in a church off Trafalgar Square. Marriner led it from his seat at the head of the first violin section until conductor Pierre Monteux came to one of his concerts, Marriner told NPR in 1997.

NEVILLE MARRINER: I had in sort of self-defense started this group called the Academy of St. Martin in the Fields which was to play the sort of music that we weren't playing in symphony orchestras. It was the smaller ensembles' chamber music of a size that was - well, above 15, 20 players - something like that. And Pierre came to one of our concerts, and he said maybe you should stand up and conduct like (unintelligible) instead of waving your bow in this ridiculous fashion.

(SOUNDBITE OF NEVILLE MARRINER AND THE ACADEMY OF ST. MARTIN IN THE FIELDS PERFORMANCE OF HANDEL'S "WATER SUITE NO. 1")

LUNDEN: Marriner studied conducting with Monteaux and he and the Academy kept on developing their musical style.

MARRINER: It was a much cooler style than we were used to playing in symphony orchestra. As you know, you tend to wrap yourself around the 19th-century repertoire in a very full-blooded manner. With this, it was much more relaxed. In a way, it's slightly more aristocratic in style.

PAGE: They had a heartiness and a sort of skeletal quality compared to the big orchestra versions that were so popular then, and I think that's one of the reasons why they're still good to listen to today.

(SOUNDBITE OF NEVILLE MARRINER AND THE ACADEMY OF ST. MARTIN IN THE FIELDS PERFORMANCE OF MOZART'S "INTROITUS REQUIEM IN D MINOR")

LUNDEN: While Marriner was popular with classical music enthusiasts, it was a call from Hollywood that helped bring him and the Academy of St. Martin in the Fields to millions of new listeners.

MARRINER: We had started to record quite a lot of Mozart repertoire and then the film "Amadeus" happened, and that exposed us to a much larger audience than we would have expected in the concert hall.

(SOUNDBITE OF NEVILLE MARRINER AND THE ACADEMY OF ST. MARTIN IN THE FIELDS PERFORMANCE OF MOZART'S "INTROITUS REQUIEM IN D MINOR")

LUNDEN: Over the years, Marriner founded the Los Angeles Chamber Orchestra, was music director of the Minnesota Orchestra and guest conducted all over the world. But it was his association with the Academy of St. Martin in the Fields for which he's most remembered. After he left as music director, the orchestra gave him the title life president. Tim Page...

PAGE: Life president is about as high a ranking as you can possibly get in a London orchestra, and I must say he deserves it. He did a lot with that ensemble, and it has had a tremendous effect on all the people who work with baroque, classical and, you know, early romantic music who've come along since. 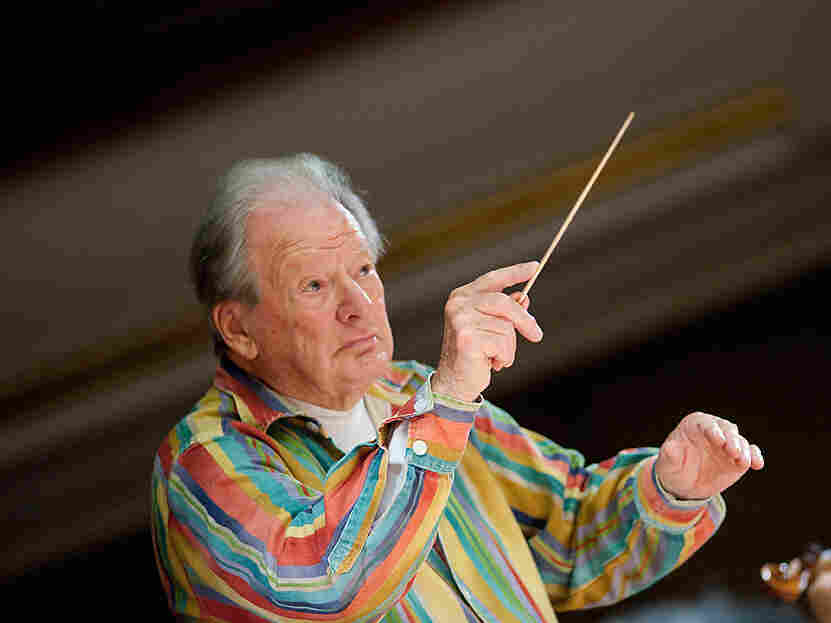 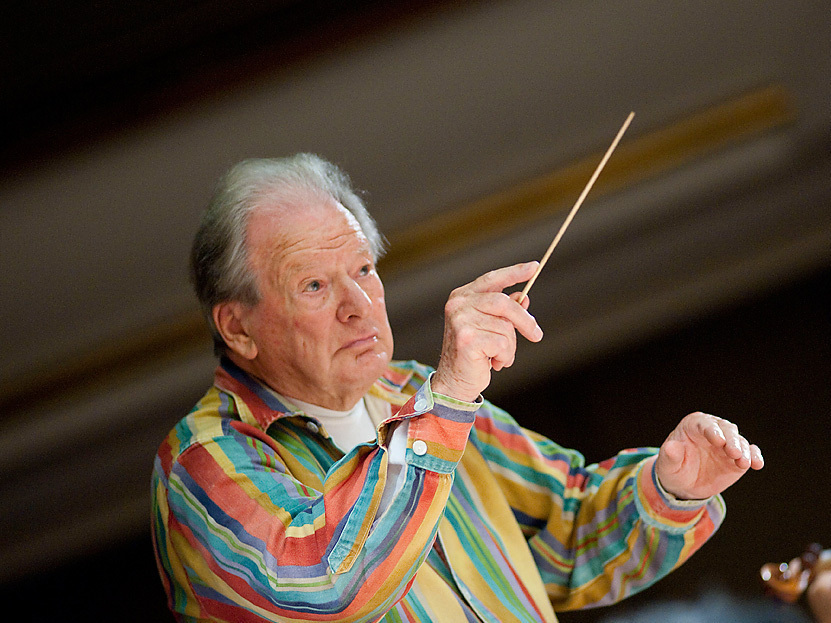 Lukasz Unterschuetz/courtesy of the artist

Neville Marriner, the conductor and violinist who was something of an entrepreneur as well as the guiding spirit behind one of the most successful classical recordings of all time — the soundtrack to the 1984 smash movie Amadeus — died overnight at age 92 at his home in London. His death was announced by the chamber orchestra he founded, the Academy of St. Martin in the Fields.

Marriner was made Commander of the British Empire in 1979, and was knighted in 1985. In 2015, Queen Elizabeth named him a member of the Order of the Companions of Honour. Marriner was also most certainly one of the most-recorded classical artists of all time, with more than 500 recordings made with his ensemble.

Born on April 15, 1924, in the cathedral city of Lincoln in England's East Midlands, Marriner originally trained as a violinist. His studies at the Royal Conservatory of Music were interrupted by World War II. After serving in the Royal Navy, he returned to the conservatory and went on to study at the Paris Conservatoire. After school, he briefly taught at Eton College and then at the Royal Conservatory, but Marriner's main focus was as a working performer.

He played second violin in the Martin String Quartet and was the co-founder of the Jacobean Ensemble, focusing on 17th- and 18th-century repertoire, before joining the Philharmonia Orchestra as a violinist in 1952. In 1956, he joined the London Symphony Orchestra [LSO] as its principal second violin, where he remained until 1968.

But Marriner was not content to remain part of a much larger institution — nor to remain a violinist. Along with studying with his mentor Pierre Monteux, he worked as an extra with Arturo Toscanini and Wilhelm Furtwängler, as well as with Joseph Krips, George Szell and Leopold Stokowski.

Three years into his tenure with the LSO, Marriner formed the Academy of St. Martin in the Fields [ASMF], a chamber orchestra that has grown into one of the best-known groups of its kind in the world, with more than 500 albums to its credit. Marriner remained music director of the ASMF until 2011, whereupon he was named "life president" and violinist Joshua Bell was named as his successor.

Along with nurturing his burgeoning St. Martin in the Fields orchestra, Marriner continued to maintain a vigorous dual life in the U.K. and the U.S. In 1969, he took on a second major post, as the first music director of the then-new Los Angeles Chamber Orchestra, and served as the artistic director of Michigan's Meadowbrook Festival from 1979-1984. Between 1978 and 1986, he was music director of the Minnesota Orchestra. (During a very public 16-month labor battle in Minneapolis between the orchestra players and the ensemble's administration, Marriner joined two other former Minnesota conductors, Edo de Waart and Stanislaw Skrowaczevski, in beseeching management to reach an agreement with the musicians.) After leaving Minnesota in 1986, he took up the post of music director of the Stuttgart Radio Symphony Orchestra, where he stayed until 1989.

Though his repertoire reached from Bach to Stravinsky and beyond, he made a real specialty of 18th-century music with his ASMF. And it was with that repertoire that Marriner became most well known and beloved by a wide public — whether or not they knew it was him on the podium. He recorded a complete cycle of Mozart symphonies (as well as major works of Handel and Haydn) during a time when, as Marriner later told Gramophone, "the big surge of companies recording everything anybody had ever written began. In order to make the catalogue complete, record companies were looking for orchestras of the right size and scale to play Mozart, so we were lucky that the Academy had the reputation of being ideal for 18th-century music.'"

Marriner and the ASMF went on to make literally hundreds of albums that helped sustain their organization. But mainstream fame came when Marriner and the ASMF performed most of the music used in the 1984 Mozart-based film Amadeus, which won eight Oscars and for which Marriner also acted as music supervisor. The Amadeus soundtrack went on to become one of the best-selling classical albums of all time.