Accessibility links
Ruth Bader Ginsburg Does Not Intend To Retire Anytime Soon "I will retire when it's time," the 83-year-old Supreme Court justice said in an interview with NPR. She also shares wedding advice from her mother-in-law and reads a letter from her late husband. 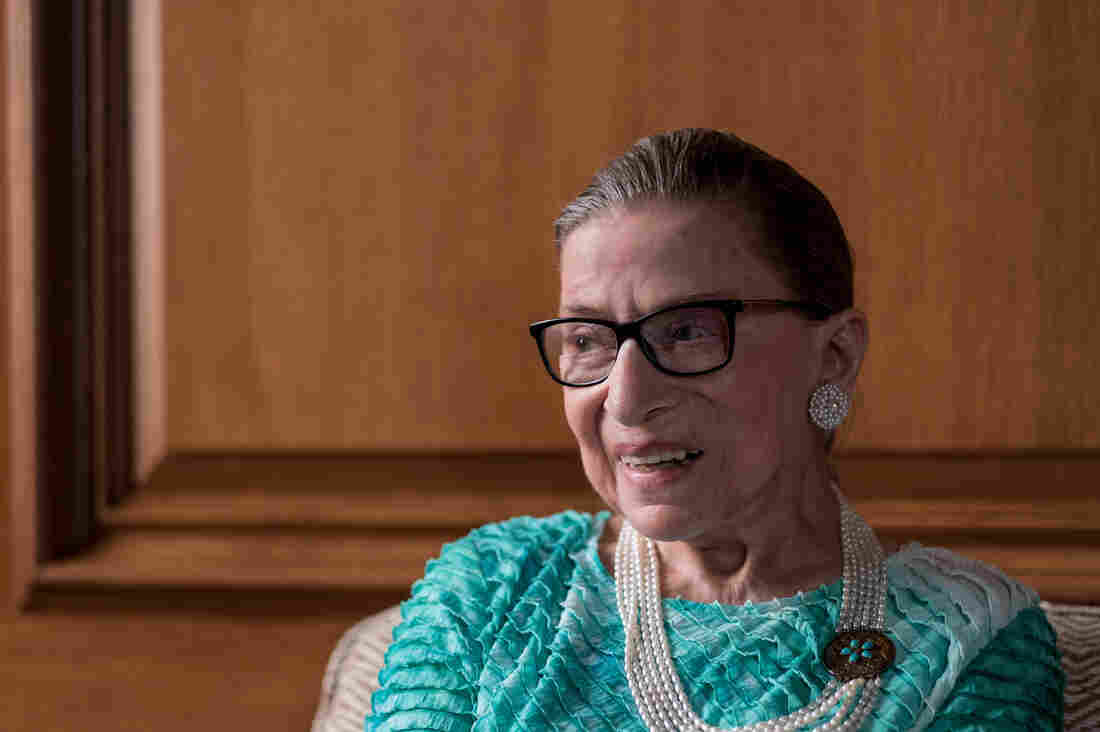 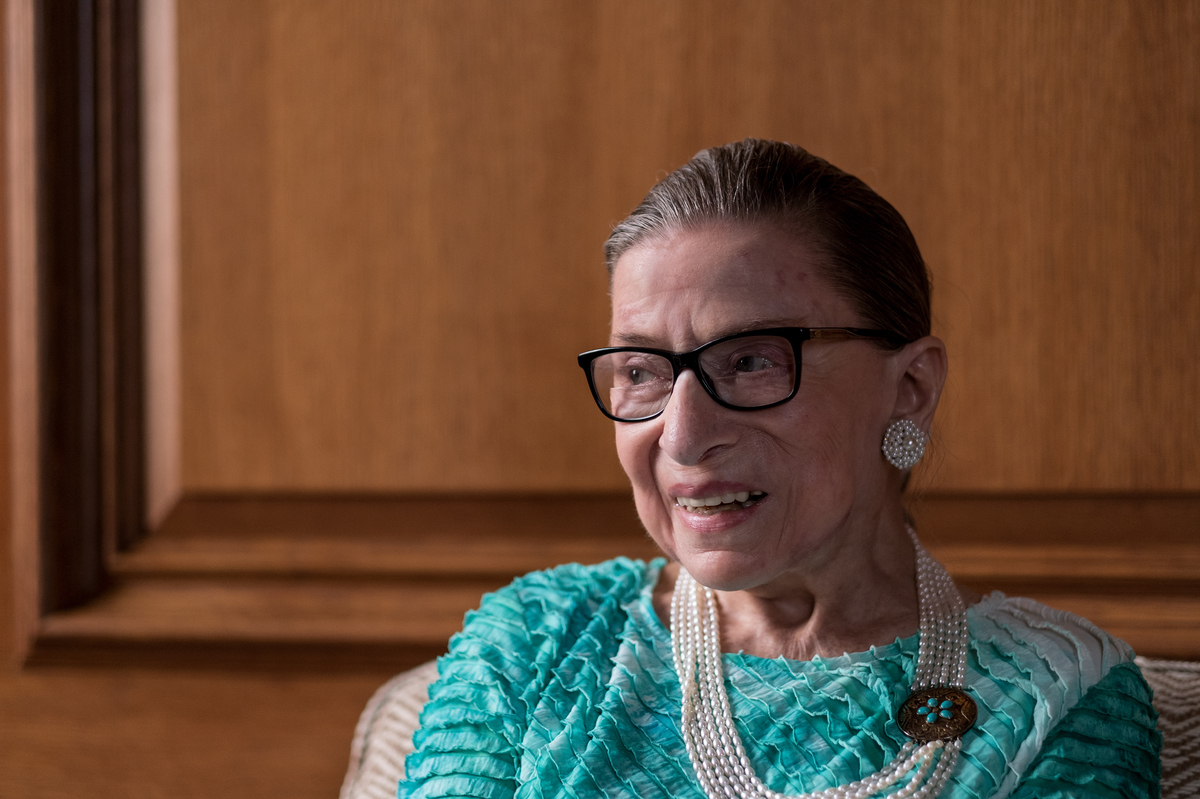 With the presidential election just five weeks away, all discussions about the U.S. Supreme Court focus on the unfilled vacancy created by the death of Justice Antonin Scalia, and the likelihood of more vacancies to come. Speculation about the most likely justice to retire centers on 83-year-old Justice Ruth Bader Ginsburg. But in an interview with NPR, she didn't sound like a woman eager to retire.

The occasion for the interview was the publication of a new book titled My Own Words. It includes a wide sampling of Ginsburg's writing, from a childhood newspaper piece to current Supreme Court opinions and dissents. 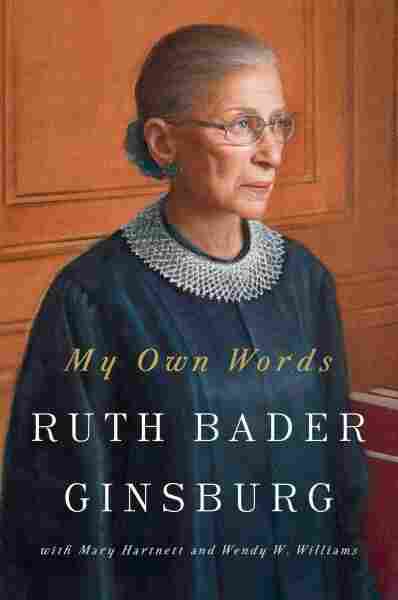 The writing samples were chosen jointly by Ginsburg and her authorized biographers, law professors Mary Hartnett and Wendy Williams. The original plan was to have this volume come out after the biography was published. But as Ginsburg put it in our interview last month:

"My biographers ... would like to have my time at the court almost complete before they finish the book. We decided ... to flip the order."

Was that her way of saying she doesn't intend to retire anytime soon?

"I will retire when it's time," Ginsburg replied. "And, when is it time? When I can't do the job full-steam."

To read these pieces is to view the span of a professional career that profoundly changed the lives of American women, their families, their schools and their workplaces.

In interviews, Ginsburg has recounted stories both funny and sad, some of them reflected in this volume. Over the years, I have come to call them "RBG's Greatest Hits."

One of them is the advice her mother-in-law gave her on her wedding day.

"She took me aside and said, 'Dear, I want you to know the secret of a happy marriage: Every now and then, it helps to be a little deaf.' And with that, she handed me a pair of earplugs."

It is advice that served her well, says the justice, not only with her husband, Marty Ginsburg, but with her fellow justices. 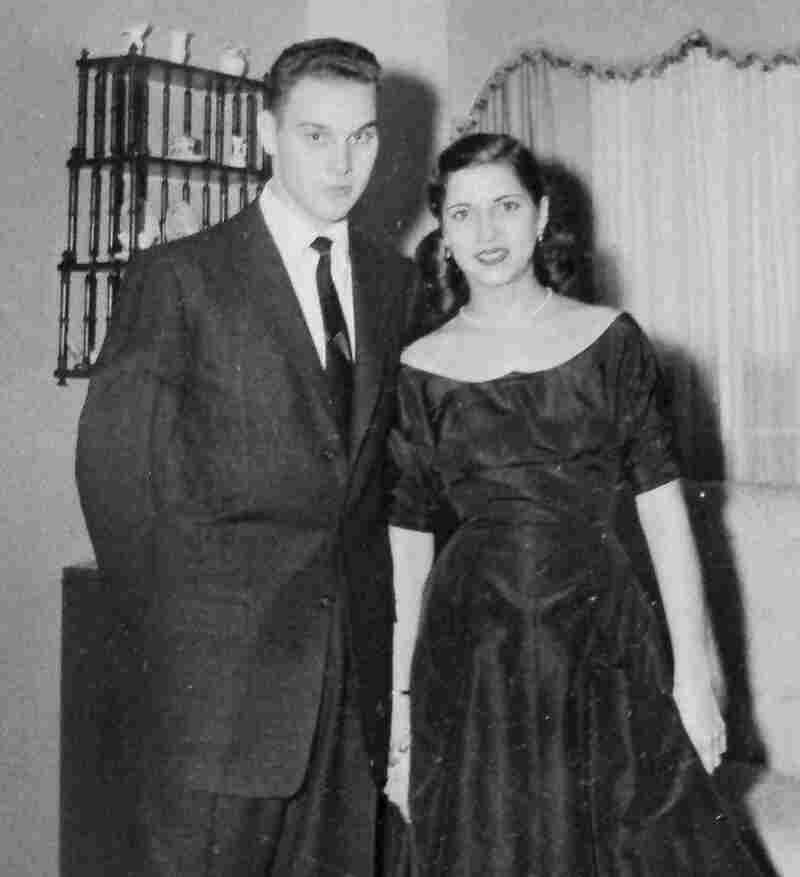 Justice Ginsburg and her husband, Marty, at Marty's home, following their engagement party, which was held at the Persian Room of the Plaza Hotel in New York City on Dec. 27, 1953. Courtesy of Justice Ginsburg's Personal Collection/Simon & Schuster hide caption

In law school, when Marty was diagnosed with testicular cancer, she learned that sleep was relatively unnecessary. She had to take care of him and her 2-year-old daughter, and do her own studying. Because daily radiation treatments made Marty too sick to eat during the day, dinner was late at night — between midnight and 2.

"My bad hamburger usually," said the justice, adding, "and then he would dictate to me his senior paper. And then he'd go back to sleep. And it was about 2 when I'd take out the books and start reading what I needed to read to be prepared for classes the next day."

Though she graduated from law school tied for first in her class, she couldn't find a job. Law firms in those days were loath to hire a woman, much less a mother.

She would go on to a stellar academic career, hiding her second pregnancy to win tenure. At the same time, she founded the ACLU Women's Rights Project.

For more than a decade she briefed and argued dozens of sex discrimination cases, persuading the courts to treat men and women the same way under the law.

Before her first Supreme Court appearance in 1973, a nervous Ginsburg skipped lunch for fear she would throw up at the afternoon argument. But in the archival audiotape, she sounds not skittish, but steely. 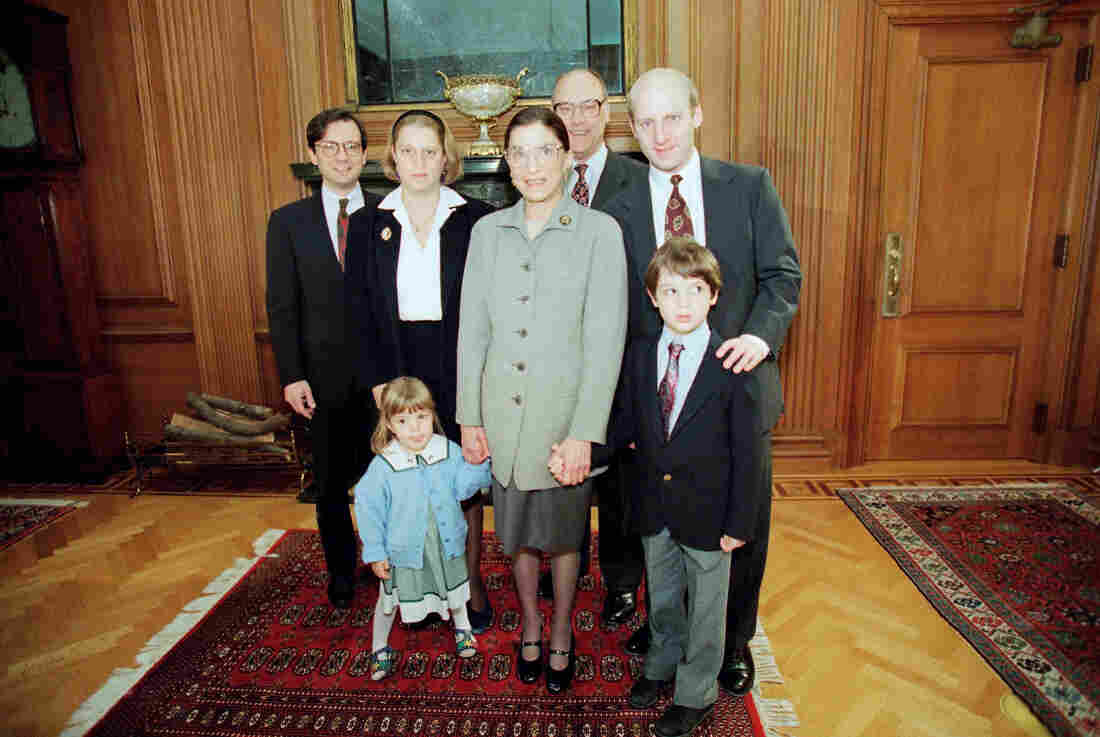 In the years that followed, Ginsburg continued her no-sleep ways, as she often does even now. But when talking to young lawyers today about so-called life balance issues, she recalls how her son's school used to call her at least once a month demanding that she come in to discuss some piece of mischief he'd engaged in.

Finally there came the day when her answer put a practical end to these calls.

"I was very weary," she said. "I stayed up all night the night before. And I said to the principal, 'This child has two parents. Please alternate calls. It's his father's turn.' "

Marty Ginsburg dutifully went to see what Ginsburg calls the "stone faces" at the school but, after that, the school rarely called. Observing that her son's behavior did not seriously change, Ginsburg theorizes that once the school had to call a man away from his work, it decided such parental calls were not worth the candle.

One of the pieces in the Ginsburg book is called "Remembering Justice Scalia." The late justice was her ideological opposite. People often ask how the two intellectual sparring partners could be such close personal friends. Ginsburg noted their many similarities — their devotion to family, to writing, to words, to opera. 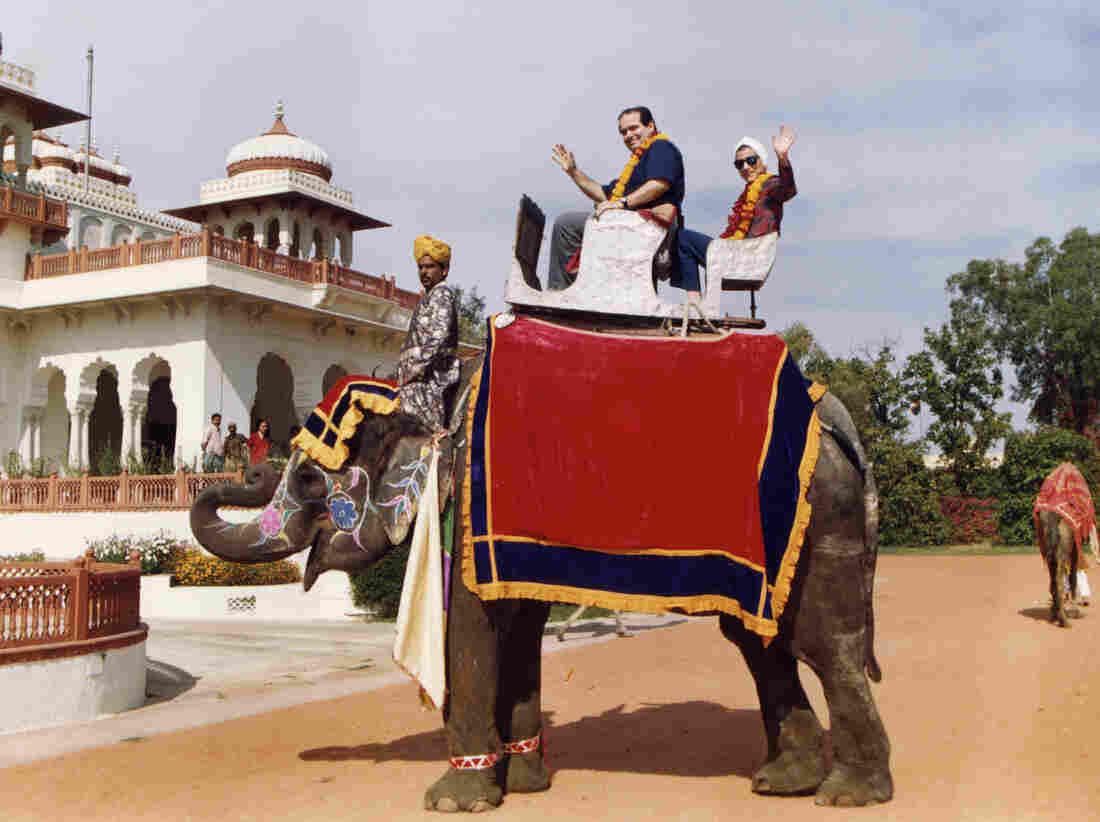 Justice Antonin Scalia and Justice Ginsburg pose on an elephant during their tour of India in 1994. Courtesy of Collection of the Supreme Court of the United States/Simon & Schuster hide caption

But first and foremost, she said, he was such a good friend because "he had an extraordinary ability to make me laugh."

A couple of years ago, I interviewed Scalia and Ginsburg for the Smithsonian Associates, and all aspects of their friendship were on display before a large audience. They teased each other, told admiring stories about each other, and they fought — intelligently, respectfully and adamantly. Like this exchange, after I asked Scalia to explain his view that the Constitution is not living, but "dead":

Ginsburg was, of course, the second woman to serve on the Supreme Court. And her other great friend among the justices was the first woman, Reagan appointee Sandra Day O'Connor. It was because of O'Connor's generosity, says Ginsburg, that as a very junior justice she got to write the court's historic opinion declaring that the all-male, state-sponsored Virginia Military Institute could not exclude qualified women.

Ginsburg explains that originally the opinion was assigned to O'Connor, "but Justice O'Connor, her response was, 'Ruth should write this opinion.' "

Now, two decades later, Ginsburg is the court's most senior and very influential liberal justice. And in February, she is scheduled to visit VMI, a school that now has a student body that's 11 percent female. 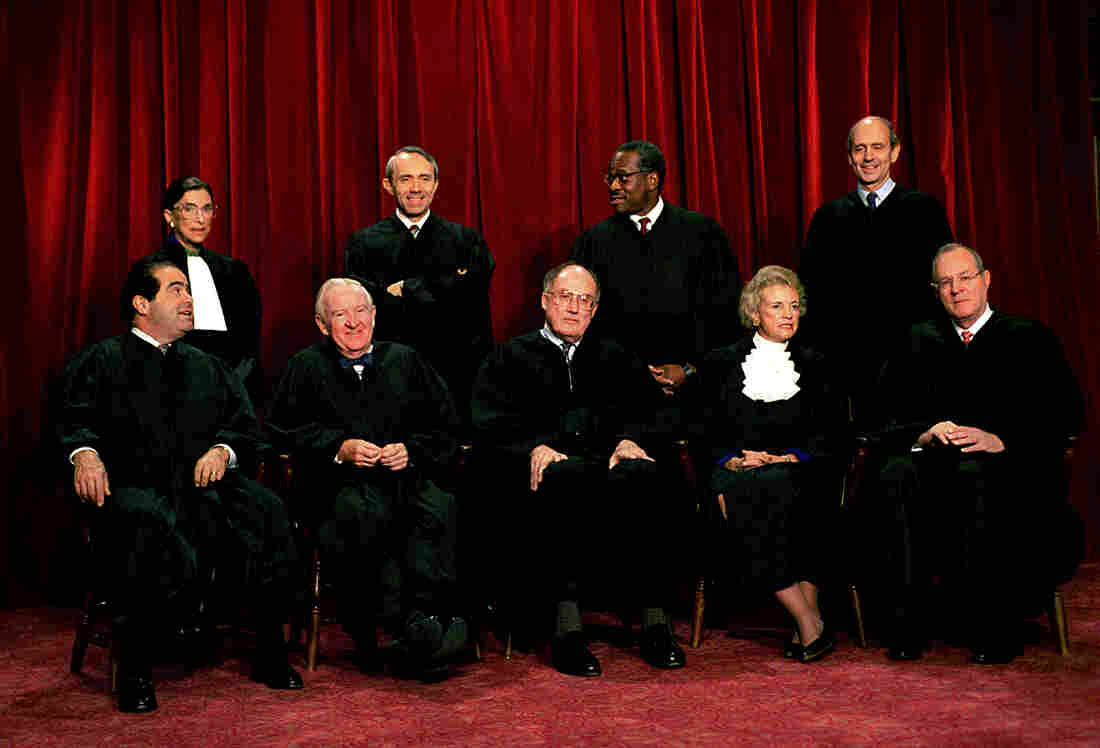 For 60 of her years on this earth, Ruth Ginsburg's biggest booster, best pal and heartthrob was her husband, Marty. He promoted her at every turn, teased her incessantly, and prodded her back to work after both of her cancer surgeries.

In 2010, though, it was Marty who was mortally ill. And as she packed up his things at the hospital, preparing to take him home to die, she found a handwritten note he'd drafted.

Ginsburg Reads A Letter From Marty

"My dearest Ruth, you are the only person I have loved in my life, setting aside a bit parents and kids and their kids ... And, I have admired and loved you almost since the day we first met at Cornell ... The time has come for me to tough it out or to take leave of life because the loss of quality now simply overwhelms. I hope you will support where I come out, but I understand you may not. I will not love you a jot less." 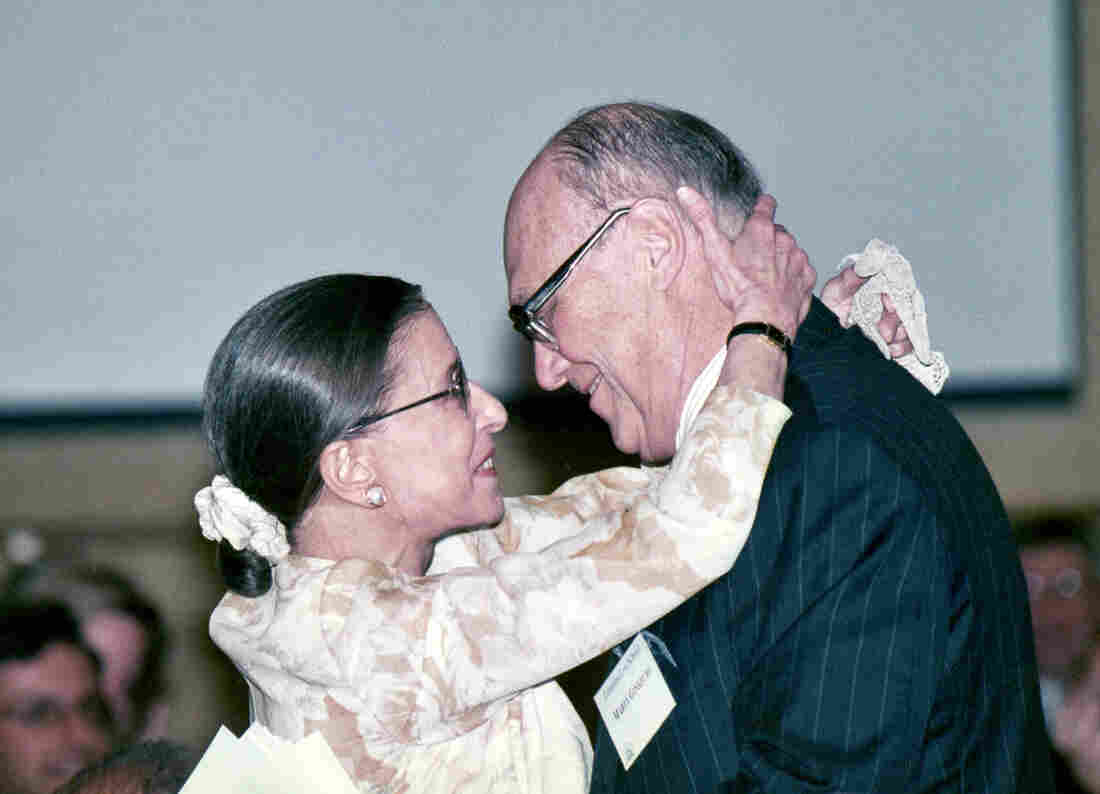 I have known Ruth Bader Ginsburg for some 40 years, and when I asked her to read the letter for an interview this summer, it was the first time I ever saw her cry.