Accessibility links
Donald Trump, Those Taxes And 'The New York Times' The Times' story revealing Trump's huge losses two decades ago relies on documents sent anonymously to the newspaper. No criminality by Trump was alleged, but critics of the Times say it broke laws.

Donald Trump, Those Taxes And 'The New York Times'

Donald Trump, Those Taxes And 'The New York Times' 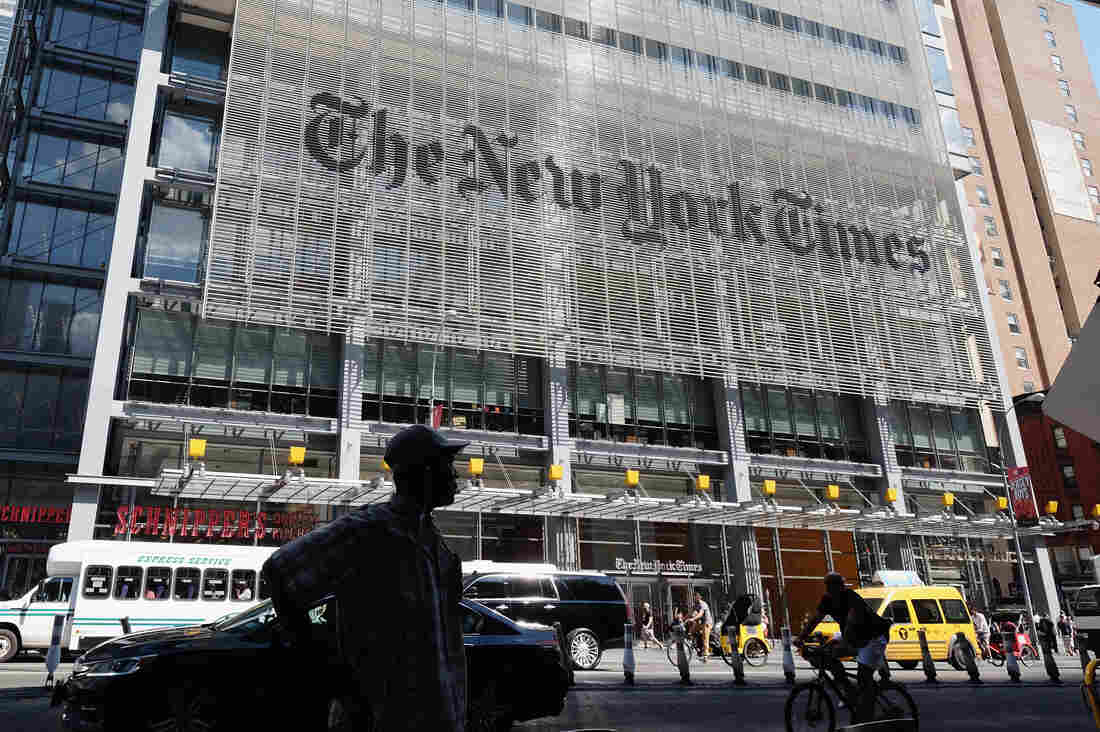 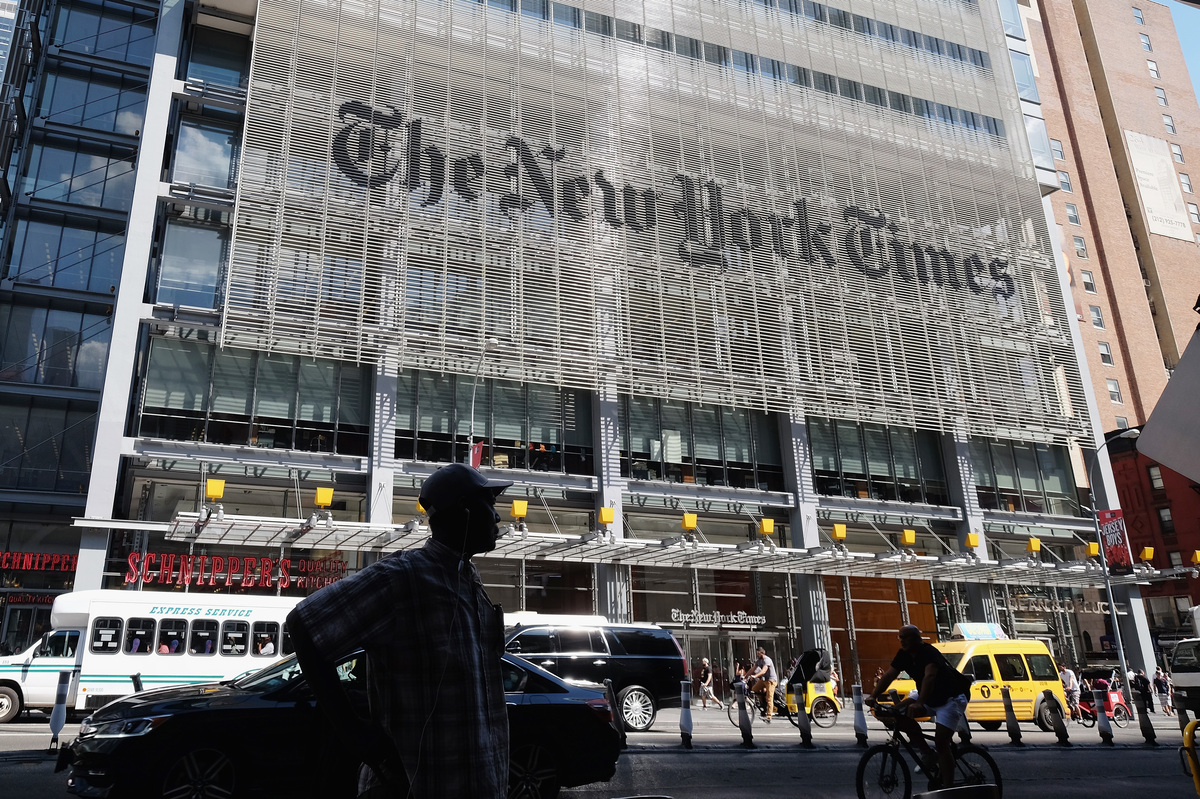 Theoretically, Baquet just might have his chance. But almost certainly, only theoretically.

The Times' big-ticket story revealing Trump's nearly billion-dollar losses two decades ago relies on three documents from state tax forms sent anonymously to the newspaper less than two weeks after Baquet's remarks, which were reported a few days later. The article goes into depth to capture how Trump could parlay those losses into great gains by using them to erase years of subsequent profits: 18 years, by the Times' calculation. That said, the paper concedes it does not know how much Trump wrote off nor how much he made. No criminality by Trump was alleged.

Trump has refused to release his tax documents himself, a convention for candidates of both parties to demonstrate transparency for the past four decades.

From a journalistic standpoint, that reliance on speculation is perhaps eclipsed by the charge from critics of the Times that it broke laws in publishing the article. Before publication of the article, the paper recounted, a lawyer for Trump sent an email terming publication of the tax records illegal because it occurred without Trump's explicit approval. The Times wrote that the attorney, Marc E. Kasowitz, threatened "prompt initiation of appropriate legal action."

The Times, which maintains a stable of crack press lawyers, published nonetheless.

There are several elements in play. First, the release of information from federal tax documents without the consent of the tax filer would appear to violate federal law that prohibits the sharing of such material and specifically its publication. The actual language in play: "It shall be unlawful for any person to whom any return or return information (as defined in section 6103(b)) is disclosed in a manner unauthorized by this title thereafter willfully to print or publish in any manner not provided by law any such return or return information."

Some conservative critics of the Times argue it clearly broke the law. So did Dan Abrams' legal site LawNewz, which is not an ideological operation. (For what it's worth, Abrams is the son of famed First Amendment lawyer Floyd Abrams.) The site wrote that the law protecting the privacy of tax forms is clear and Baquet's remarks indicate he broke it "willfully," a term that carries weight in such suppositions.

The federal investigation of the leak of former CIA agent Valerie Plame's identity led to the jailing of the Times' then-reporter Judith Miller for nearly three months to force her to identify her sources. It became clear federal judges would not uphold that an implied First Amendment right to keep sources secret overran the need of prosecutors to gather relevant facts in investigations. But in this case what is at issue is the publication of the information. Prosecutors and judges are unlikely to leap to make a criminal case of a news judgment involving a presidential nominee.

Former federal prosecutor Stephen Ryan says that the supposed prohibition of publishing Trump's tax information runs aground of free speech principles. It is of such obvious public interest — showing voters Trump's financial record, how he comported with tax laws, and his own possible entanglements — that it evokes the very point of the First Amendment, Ryan says.

"The law is very clear in this area to me — there's no case against the journalists that can be made in this area," Ryan says. He has counseled corporations on tax disclosure laws and journalists on protecting sources. "None. Zero. The only person who can be liable would be a government official who leaked the material, of which I see no evidence here." (For the record, Ryan donated $2,700 to Hillary Clinton's presidential campaign late last year, according to a review of campaign finance databases.)

"That's black-letter law — there's no disagreement about that," Ryan says. "It runs contrary to 230 years of First Amendment history."

Similarly, the media lawyer Susan E. Seager wrote Sunday in the Daily Beast that major court rulings on publication of leaked classified federal documents, accidentally leaked court records and illegally taped phone calls show there can be no (or almost no) such thing as punishing the media for publication of leaked documents of a matter of public concern when a journalist innocently receives the leaked documents. The New York Times did not direct or ask the leaker to obtain that information and share it; she or he mailed it anonymously.

"The journalist cannot be prosecuted for criminal violations or sued under civil privacy laws even if the leaker broke civil or criminal laws by obtaining or leaking the documents," wrote Seager, a former top lawyer for the entertainment division of 21st Century Fox.

After publication, Trump's camp did not mention lawsuits or prosecutions. It sent a letter to the newspaper calling the tax sheets "a 20-year-old alleged tax document" that was "illegally obtained." And the letter contended "the New York Times, like establishment media in general, is an extension of the Clinton Campaign, the Democratic Party and their global special interests."

Trump has shown an inclination in the past to sue others for public statements that proved inconvenient. In one case, he wanted to bleed the reporter and writer Timothy O'Brien financially. Yet the Times could seek to use any lawsuit as a means of forcing Trump to answer questions about his finances under oath, a prospect the candidate and developer would presumably want to avoid at almost all costs whether as president or in private life.

Which leaves the Times free to cover Trump — and Trump free to blast the Times.

An earlier version of this story incorrectly said that media lawyer Susan E. Seager defended The New York Times' decision to publish an article about Donald Trump's taxes by citing the unconstitutionality of "prior restraint," in which a news organization is prevented from publishing something newsworthy ahead of time. While Seager cited a historic case in which prior restraint was ruled unconstitutional, she was citing its precedent protecting the publication of stolen documents by journalists who received them but committed no crime in obtaining them.