Accessibility links
Federal Crackdown Merely 'A Respite' For Aryan Brotherhood Of Texas The Justice Department has been trying to take down the Aryan Brotherhood of Texas, a violent prison gang. In 2014, 73 members were convicted. But a top ABT member says the group is bowed, not broken. 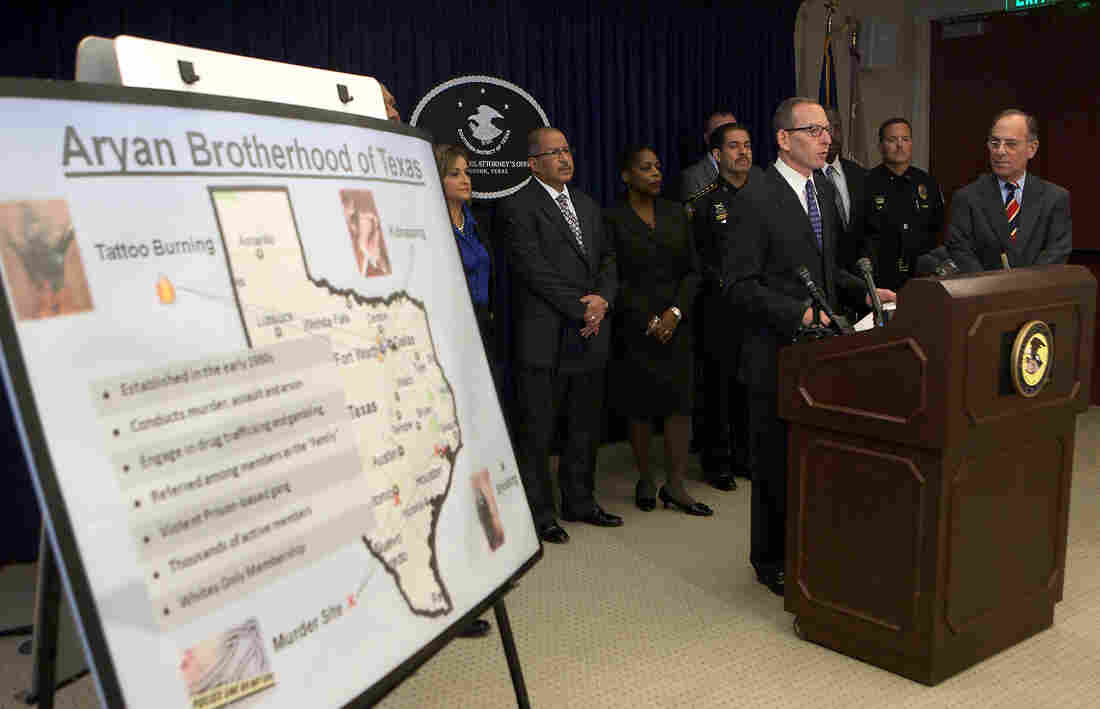 The Justice Department says racketeering convictions have "decapitated" the leadership of the Aryan Brotherhood of Texas and "decimated" its ranks. Here, Assistant Attorney General Lanny Breuer announces in 2012 the arrest of dozens of Texas members of the white supremacist organization. Cody Duty/Houston Chronicle via AP hide caption 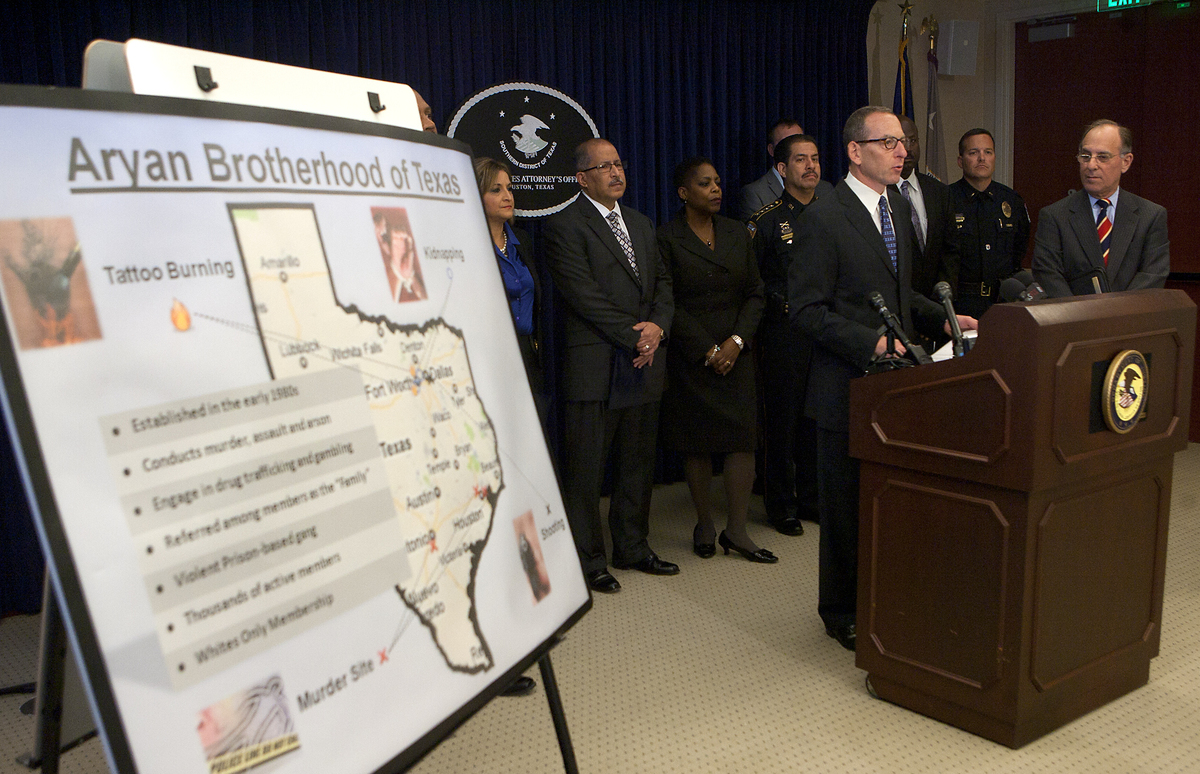 The Justice Department says racketeering convictions have "decapitated" the leadership of the Aryan Brotherhood of Texas and "decimated" its ranks. Here, Assistant Attorney General Lanny Breuer announces in 2012 the arrest of dozens of Texas members of the white supremacist organization.

The Aryan Brotherhood of Texas originated in prison in the early 1980s as a protection racket for white inmates, but as the tattooed gang members were released into the free world, they became one of the most violent crime syndicates in America.

Two years ago, the Justice Department trumpeted that it had "decapitated" the leadership of the Aryan Brotherhood of Texas, or ABT. Seventy-three gang members were convicted, including all five regional generals.

Investigators say today, with more ABT members locked up, there is less mayhem on the streets and fewer vicious attacks by Aryan brothers on each other. To hear a top former enforcer for the gang tell it, the Aryan Brotherhood is bowed, but not broken.

'I do not think the ABT is finished'

James Burns is a 46-year-old convicted methamphetamine dealer and former oilfield roughneck. He's covered from the neck down in tattoos of swastikas, SS lightning bolts and other Nazi symbology associated with the ABT.

Inside a maximum security state prison in South Texas, guards bring him handcuffed from his isolation cell into a visiting room and lock him in a cage with black iron bars. As a rule, the ABT is secretive and its leaders rarely open up to journalists.

The inmate is buff from doing push-ups in his cell all day. He's relaxed, wary and seems to enjoy the change of scenery.

His gang nickname is Chance, short for "Last Chance," which is tattooed in cursive across his neck.

"It's usually your last chance when you see me," he says, grinning, "... [because] usually [you] done something to the family to get me sent." 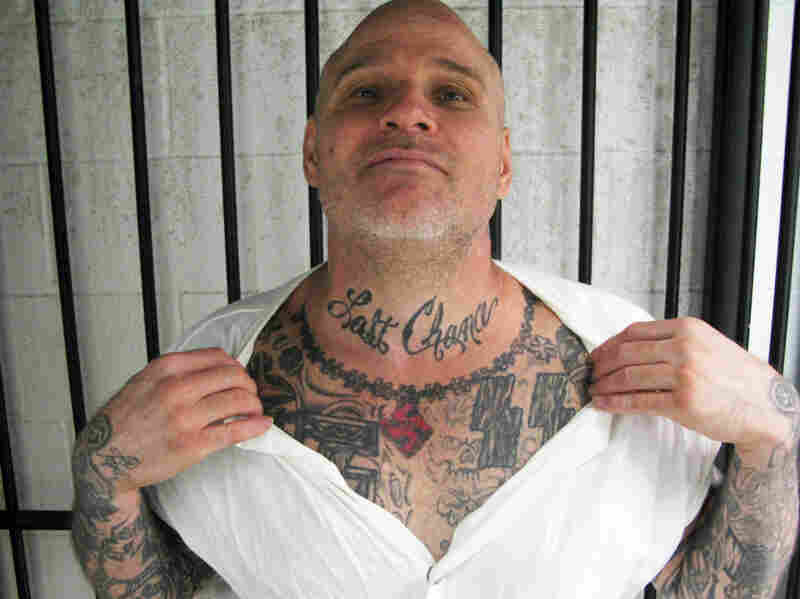 James "Chance" Burns — his nickname is short for "Last Chance" — is a member of the Aryan Brotherhood of Texas. He got a 20-year prison sentence in 2014 in part for his role in an assault. John Burnett/NPR hide caption 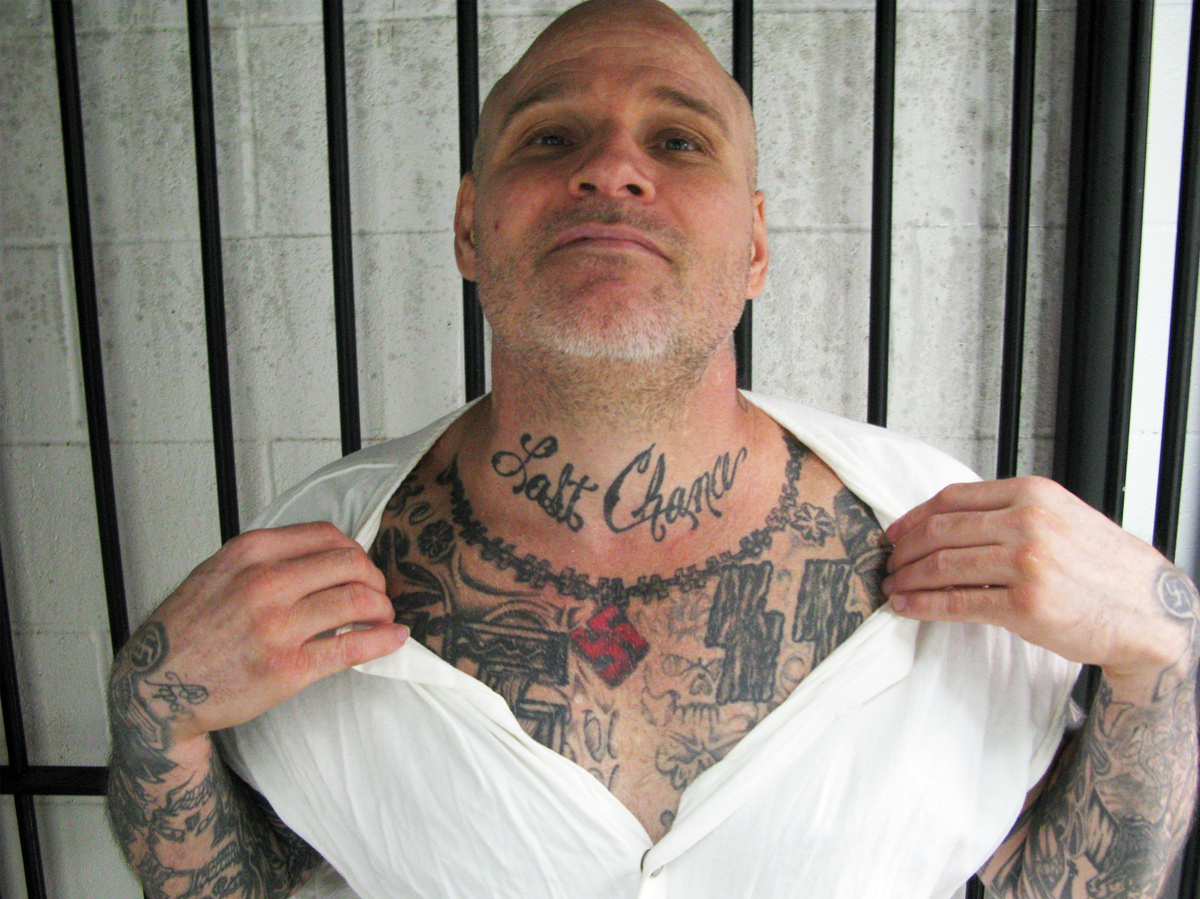 James "Chance" Burns — his nickname is short for "Last Chance" — is a member of the Aryan Brotherhood of Texas. He got a 20-year prison sentence in 2014 in part for his role in an assault.

"The family" is the ABT. State chapters of this racist prison gang are all over the country, from California to Florida. The Justice Department considered the Texas branch to be the biggest and most violent of them all, and it had to be stopped.

"There are other people who will pop up as leaders. I do not think the ABT is finished," says Mark Potok, senior fellow at the Southern Poverty Law Center. The group tracks hate groups in America, among them the ABT.

"But certainly they have suffered a very serious blow," Potok continues. "We'll just have to wait and see how quickly they're able to come back."

Burns held the rank of senior major of the Dallas-Fort Worth region. As such, he ordered punishment for brothers who they believed had committed infractions like stealing from the gang, disrespecting a brother, snitching to the cops or forgetting the organization's creed: "We must secure the existence of our people and a future for white children."

Burns says prospects know what they're getting into when they take the oath. "It's like ridin' bulls," he says, "You're gonna get hurt. It's not when, it's how bad. Well, same way with the Aryan Brotherhood."

'You're gonna get it'

The ABT is well known to law enforcement for the savagery of its retribution. Most criminal gangs direct violence outwardly at rivals; Aryan brothers employ brutality internally to maintain discipline.

Art Clayton, a prosecutor in Fort Worth who's handled some gruesome ABT attacks, thinks they're drug-crazy.

"When you read the cases," Clayton says, "it's violence for the sake of violence. It doesn't have as much rhyme or reason to it, and I think that methamphetamine plays into it quite a bit."

Here is an example of the ABT's ultra-violence, and it's not nice. NPR has included it so that people can understand why a task force made up of 20 local, state and federal agencies spent six years doggedly pursuing this group. In the interview with NPR, Burns describes how he removed an ABT tattoo, or patch, from one of his associates, which is standard gang punishment for someone believed to have talked to the authorities.

Burns: That patch on his side I burned it off.

NPR: With a blowtorch.

Burns: It stinks. Your skin, it catches on fire, your grease in your body and on that side there's a lot of fat there.

NPR: You're kinda smilin' when you say that.

NPR: Doesn't the memory bother you?

Burns: Not at all. What he did, if you snitch or you do something else, you're gonna get it, you know, and it's gonna be bad.

Burns got 20 years in prison, in part for his role in this assault. His victim survived the torture — barely — only to be murdered later in a separate incident. When Burns finishes his time in state prison for a parole violation, he will be transferred to the federal system on the racketeering conviction.

Even Terrorists Have To Fill Out Expense Reports

The remarkable thing about this case is that more than half of all the defendants cooperated with prosecutors in exchange for leniency. They snitched against the family, a betrayal punishable by death in the gang's harsh code of justice.

Such is the hatred of informants that Burns has a tattoo on his neck of an ABT general who testified for the government. His nickname, Terry "Lil Wood" Sillers, is spelled out hanging from a gallows.

"Lil Wood hung himself to me," he says. "He was my friend, my brother. He did the carnal sin to the Aryan Brotherhood. He gave up state's evidence to get out of trouble."

Federal prosecutors with the Justice Department declined to comment for this report. Special Agent Allen Darilek of the Bureau of Alcohol, Tobacco, Firearms and Explosives was an investigator on the task force, and he thinks top ABT leaders testified against their brothers because they were tired of gang life.

"I think they're getting older, and some of them have kids," Darilek says. "I think also some of them were looking at the charges we had against them and decided that maybe they didn't want to spend every last minute of their life in jail."

Someone might logically ask: How do prosecutors dismantle a prison gang by sending its members back to prison where they thrive?

Mike Squyres, a veteran gang investigator at the Harris County Sheriff's Office in Houston, says the key is that these defendants got time in federal prison, not in Texas prisons.

"The whole federal thing can have a real punch," Squyres says. "Not only are they going to do way more time than they would do in the state system, but they can go all over the United States. So if you do get sent to a federal penitentiary in New York, there may only be one other Aryan Brotherhood of Texas member."

Back in the prison visiting room, Burns is asked if the racketeering convictions have "decimated" the family as the feds say?

"No, the family is not in chaos," he says, grinning some more. "No, we're not worried about nothin'. You're helpin' us get rid of our trash. If they're gonna talk, we don't want 'em in the family."

From the cops' perspective, "it's a respite," says Squyres. "We can exhale for a minute, and then the Aryan Brotherhood of Texas will start growing again."