Accessibility links
'The Angel Of History' Says 'I Will Not Forget' Rabih Alameddine has much in common with the hero of his new novel: Both are gay, Arab writers in San Francisco. And both lost friends to the AIDS epidemic, and are angry that it's being forgotten. 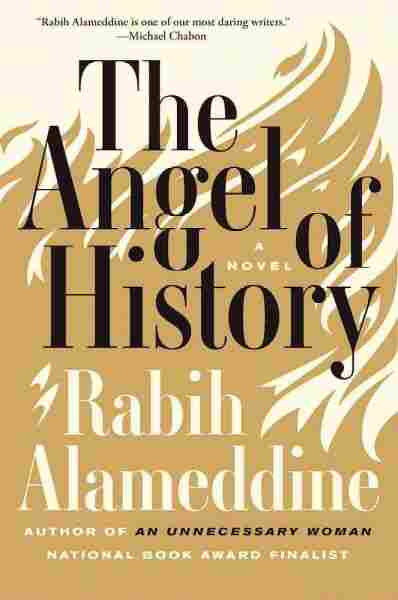 The Angel of History

The main character in Rabih Alameddine's new The Angel of History is a gay, Arab writer living in San Francisco.

Alameddine is a gay, Arab writer living in San Francisco. But he says the character, Ya'qub — or Jacob — is not based on his life. For one, Jacob's sex life is a little more ... adventurous than his.

"He's somewhat of a sexual masochist, and I keep thinking, you know, well, for me, rough sex is having sex on linens that are less than 300 count cotton," Alameddine jokes to NPR's Kelly McEvers.

Jacob and the author do have some things in common: Jacob has lost friends to AIDS, and he wavers between wanting to remember them and trying to forget them; he gets help in this from Satan, his rival Death, and a cast of colorful saints.

Alameddine says writing the book was a way to deal with his own anger.

It's interesting that when I started writing the novel I was angry at nothing specific, really. Not at first. And it's funny, because things were going well in my writing and so on. The anger, I couldn't place it, and it would be at any sort of reminder that we're forgetting.

On living through the epidemic in San Francisco

I was one of two or three people who started a gay soccer team in 1982. By 1992, we'd probably lost half the team. I never had a lover who died, or I never really took care of a primary person. But I took care of many people. And then worse, at the height of it, which is what I tend to do, I became an emotional support volunteer at [The] Shanti [Project], so I was — it's not just that I had my friends, I had what was called clients, and everybody was dying.

On the appearance of Satan and Death in the book

It's a negotiation, or as they come to explain, it's a dance that they do. Basically, it's the whole tension between memory and forgetting. One can't exist without the other, so what they do is this dance. Satan says at one point, "let me lead for a change." Because he's the angel of memory. Whereas, like I said, we live in a time where primarily we are encouraged to forget, and that, in the book, is Death's domain.

[Satan] is the angel who said no. He refused to become part of the dominant culture. He said no to God. He was the rebel, and we have lots of revolutions. So you know at one point he does say, "all those who say no, follow me." And I'm saying no, and so is Jacob — no, we will not forget.