Accessibility links
Powerful Poetry Urges Us To 'Look' More Closely Solmaz Sharif's collection, Look, has just been shortlisted for a National Book Award. Playing on the military language in a Department of Defense lexicon, it's a wrenching look at war and duality. 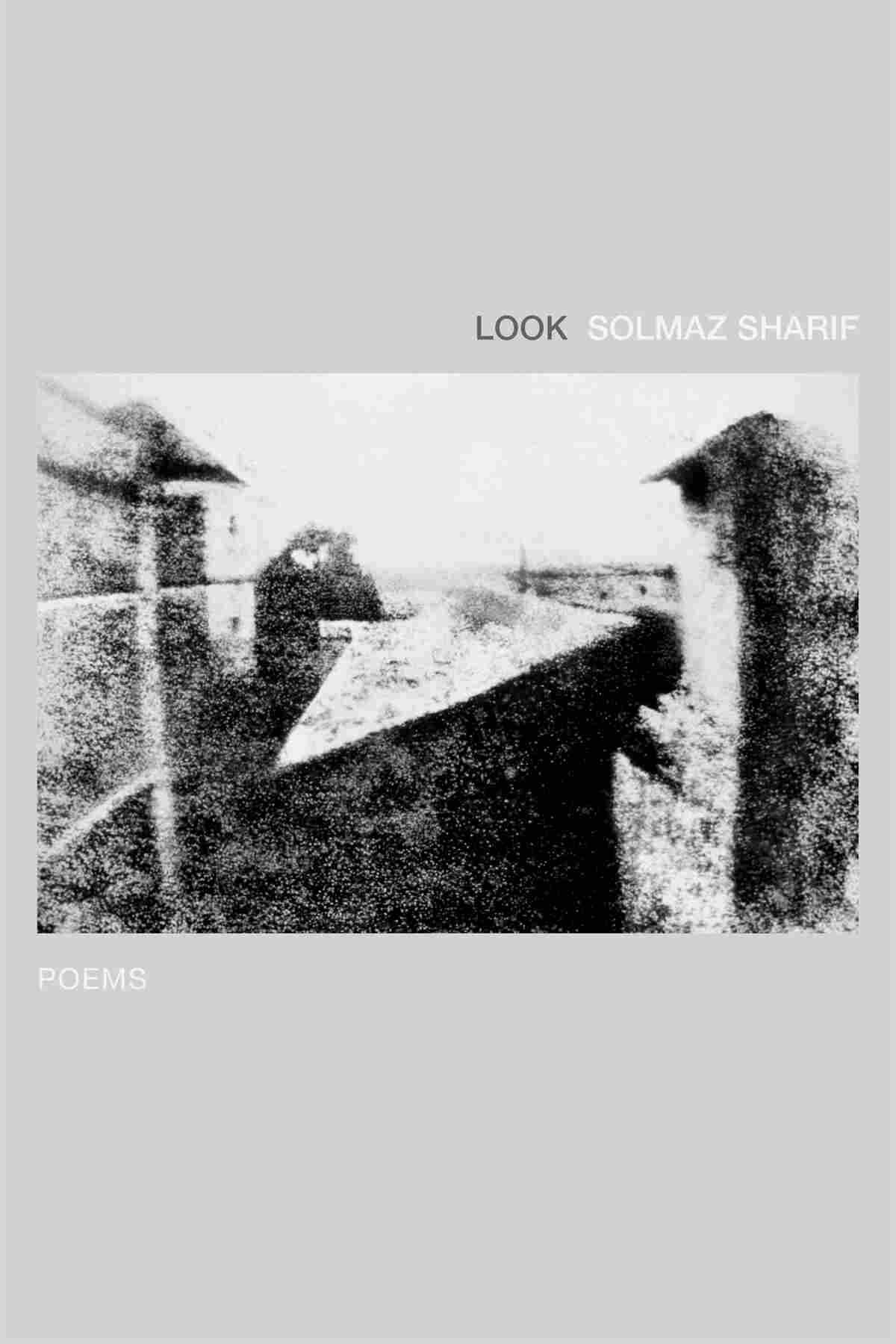 Look, the debut collection of poetry from Solmaz Sharif, opens with all the grace of an unpinned grenade: "It matters what you call a thing." But this comes as less a warning than a war cry.

Her slim grey collection, just shortlisted for a National Book Award, begins — and is built by — the cold vocabulary of the Department of Defense's Dictionary of Military and Associated Terms. First published in 1989 and routinely amended since, the dictionary outlines an entire vocabulary that blurs military procedure into euphemism. These terms are loud and unmissable in her work — not woven or folded lightly into the poems, but knifed through in harsh small caps. But it is to Sharif's credit that her poetry flicks between lyric and lexicon while still sounding like music; in her hands, language is as pliant as warmed wax.

Throughout Look, Sharif returns our gaze to this duality. Though these words are sterile, even callous euphemisms of wartime politics (terms like "KILL BOX" and "WARHEAD MATING," for instance) they mix with her verse with a surprising capacity for tenderness.

By dint of the energy by which it's deployed, the poetry sounds at these two different frequencies of trauma and beauty. Look is tonally sliced into two halves: one that burns and roils with fatigue, and one that speaks at a gentler, more mournful pitch.

This polarity follows Sharif's verse as it gestures at something she calls "our sanctioned twoness," the conscious state of bearing two states of being at once. Here, the poet is political, here she is personal. She writes as citizen, as sister, as niece, daughter, or lover. Because the reality of one state is contingent on the other, Sharif's doubling is a function — or more accurately, a consequence — of war's impact.

While the entire collection is, to some degree, an ode to all language claimed by war, at Look's core lives the memory of the poet's uncle. Killed among millions in the Iran-Iraq war, her Amoo is buried amid Sharif's longest lyric. He too is twinned, at once a beloved and statistic.

"Daily I sit/with the language/they've made/of our language," she writes, picking up force, "to NEUTRALIZE / the CAPABILITY OF LOW DOLLAR VALUE ITEMS / like you."

In moments of great literal silence, Look gives its audience a counterweight to the deliberateness of wartime jargon. The sense of serenity that intentionally-poetic phrases suggest — terms like TOGETHER FORWARD or GLAD TIDINGS OF BENEVOLENCE, for example; two remarkably ironic names of US operations in Iraq — find their match in Sharif's use of elision.

Lines elide and enjamb, dropping unprompted into the vacant page. The chilly gulches between words give us much to chew on: As with our military language, there is too much space between what the poetry does say and what it wants to say. There is a sense that something bulges invisibly beneath or between these words.

Her beloveds become tangled in her war terminology, as damaged by the effects of war as the language itself. Her brother, for instance, reconfigures the shape and size of a DESTRUCTION RADIUS:

By cupping her addressee inside the DoD terminology — placing the personal within her political — Sharif co-opts the already co-opted. If her brother cannot recover from the trauma of war, then she can at least reclaim its language in his memory.

In the way that oil and water seem to glitter when mixed, transliterated Farsi sings alongside warspeak in an elegiac 33-page epic to her uncle. Like the poem's title, these are "Personal Effects," or traumas inflicted by war. A page-long encyclopedia entry of Operation Nasr (the largest tank battle of the Iran-Iraq war) plays against tender terms shared between girl and uncle.

Language and its expectations
teaches us
about the relationship

we would have had.

It is the central miracle of Look that Sharif shows us the real intensity of her conceit without veering into triteness. She is, in turns, icy and searing, but consistently fierce and beautiful. By her new code, we are urged toward vigilance and clarity, urged to always have eyes to see. For in poetry or wartime, the worst thing one can do with words is to be blind to them. Look, she urges us. So we do.