Accessibility links
Ahead Of Presidential Debate, Can Donald Trump Apologize For Lewd Comments? That may be the question for Republicans who haven't yet joined the growing chorus of calls for Trump to withdraw his candidacy as he heads into the second presidential debate on Sunday. 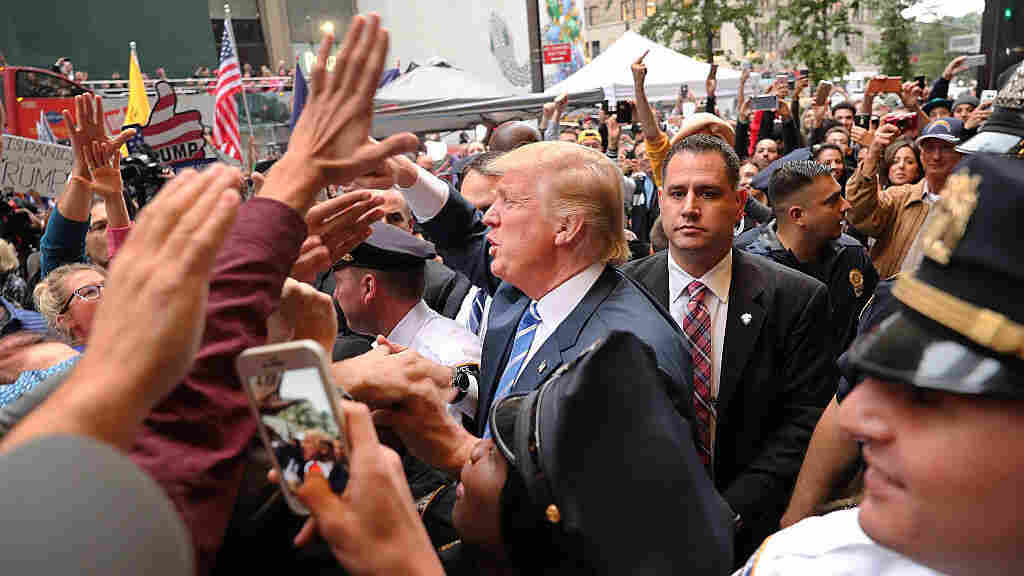 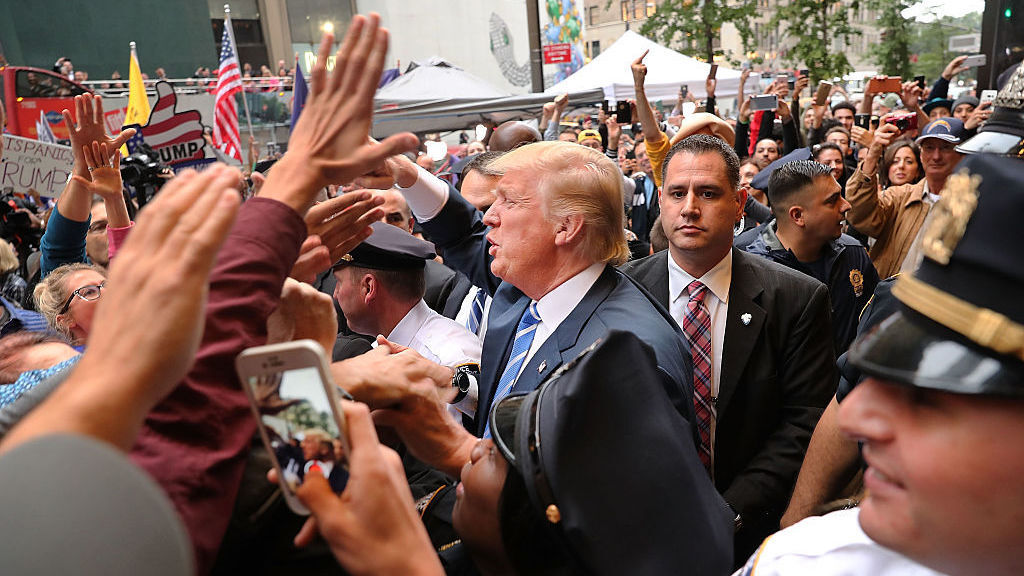 Donald Trump greets supporters outside of Trump Towers in Manhattan October 8, 2016 after a 2005 video revealed lewd comments Trump made about women.

Donald Trump has apologized for his vulgar comments about women that were revealed in a recording obtained by the Washington Post on Friday. But is he truly sorry for his attempt to seduce a married woman and for boasting about groping women he'd just met?

That may be the question for some Republicans who haven't yet joined the growing chorus of calls for Trump to withdraw his candidacy as he heads into Sunday night's second presidential debate of the general election cycle.

For Republicans who've denounced Trump's words without calling on him to leave the race, his performance in the debate – his next public appearance since the scandal broke – could be decisive.

Republicans Call For Donald Trump To Drop Out; Trump Says He Won't Quit

North Carolina Sen. Richard Burr, who's in a competitive race to hold on to his seat, has said he will watch Trump's "level of contrition" in the coming days before deciding what level of support to give the nominee.

After the news broke Friday afternoon, House Speaker Paul Ryan rescinded Trump's invitation to campaign with him in Wisconsin on Saturday, without rescinding his support. In a statement, Ryan seemed to encourage Trump to show remorse, saying, "I hope Mr. Trump treats this situation with the seriousness it deserves and works to demonstrate to the country that he has greater respect for women than this clip suggests."

Trump's running mate, Indiana Gov. Mike Pence, was initially supposed to fill in for Trump at the event with Ryan but backed out and released a statement saying he did not condone or defend Trump's remarks. Pence praised Trump for apologizing before adding, "We pray for his family and look forward to the opportunity he has to show what is in his heart when he goes before the nation" at the debate.

The Pence family isn't the only one who will be watching Trump for signs of penitence.

Penny Nance, CEO and President of the conservative Christian group Concerned Women for America, said in a message to NPR: "It is essential for Donald Trump to take full responsibility for his actions, show contrition and to project a change of heart."

Sincere remorse may be Trump's only hope for salvaging what's left of his mainstream support, according to Republican pollster Frank Luntz.

"It is not only important, it is essential for Trump to acknowledge that what he said was wrong. Then, he needs to apologize for it, ask for forgiveness, and finally do something that demonstrates a genuine change of heart," Luntz said in an email. "I don't know if he has it in him – but he better find it."

Bill Dallas of the evangelical group United in Purpose said he thinks Christian voters will forgive Trump – if he can convince them he's had a change of heart. Dallas helped organize a meeting of evangelical leaders with Trump in New York earlier this year. Dallas says he believes the Republican nominee is a different person than he was a decade or more ago, but he needs to make that case to people who haven't met with him in person. Dallas said, Trump should make clear that he understands how "ugly, despicable and horrible" his words were, and tell viewers that he's changed.

But so far, Trump doesn't seem especially contrite. Only once before during the campaign had Trump expressed any measure of "regret" for his past controversial remarks – and even that statement was vague and nonspecific.

"I fully think apologizing's a great thing, but you have to be wrong," said Trump in a September 2015 interview with Jimmy Fallon.

The Trump campaign's first move after the release of the lewd recording was to release a brief statement in which he described his words as "locker room banter" and added, "Bill Clinton has said far worse to me on the golf course - not even close. I apologize if anyone was offended."

Hours later, his campaign released a video statement apologizing for the remarks themselves and promising to be a "better man." But there, too, Trump quickly turned to pointing the finger at his Democratic rival's husband, former President Bill Clinton, for his own history of sexual abuse allegations and infidelity.

To that, Alice Stewart, a former spokeswoman for Texas Sen. Ted Cruz's unsuccessful primary bid, said in an email that Trump needs to avoid changing the subject: "There is no defense for these vulgar statements. If this were an isolated incident, it would be one thing, but this is the latest in a series of events that demonstrates Trump has selective respect for women. At the town hall, Trump needs to show true remorse and convey that this type of disrespectful behavior will not happen again. In addition, he needs to stop comparing his actions to anyone else who is not running for president."

Cruz recently endorsed Trump, and has condemned his remarks about women, but has yet to weigh in on whether Trump should remain the nominee. Cruz's chief campaign strategist, Jason Johnson, suggested Trump's words were in keeping with other inflammatory remarks he's made over the course of the campaign, but a heartfelt apology might be a good strategy.

"I really have a hard time believing his comments came as a surprise to most of his supporters," Johnson said. "Even so, an attempt at remorse couldn't hurt. Just not sure many will remember the remorse after he torches Bill and Hillary (Clinton) for different versions of the same offense. This really is a race to the bottom."

On Sunday morning, with the debate just hours away, Trump seemed to go after Republican office holders who've called on him to step down. On Twitter, he called them "hypocrites" and threatened that the decision to withdraw support could hurt them politically:

So many self-righteous hypocrites. Watch their poll numbers - and elections - go down!

Even a former Trump advisor, Barry Bennett, said he thinks Trump's only shot at redemption – and a slim one at that – is a dramatic and public mea culpa.

"I think contrition is all he can do to try and save this. But it will need to be extraordinary. Something we have not seen so far," Bennett wrote in a message to NPR. "We will need to see the greatest apology ever given just to have a chance. It seems improbable if not impossible. A combination of contrition and contortion."