Accessibility links
What We Know About Juanita Broaddrick, The Woman Accusing Bill Clinton Of Rape Trying to turn the tables on his opponent, Donald Trump is pointing the finger at Bill Clinton and a former nurse who says Hillary Clinton enabled his alleged sexual assault.

A Brief History Of Juanita Broaddrick, The Woman Accusing Bill Clinton Of Rape

A Brief History Of Juanita Broaddrick, The Woman Accusing Bill Clinton Of Rape 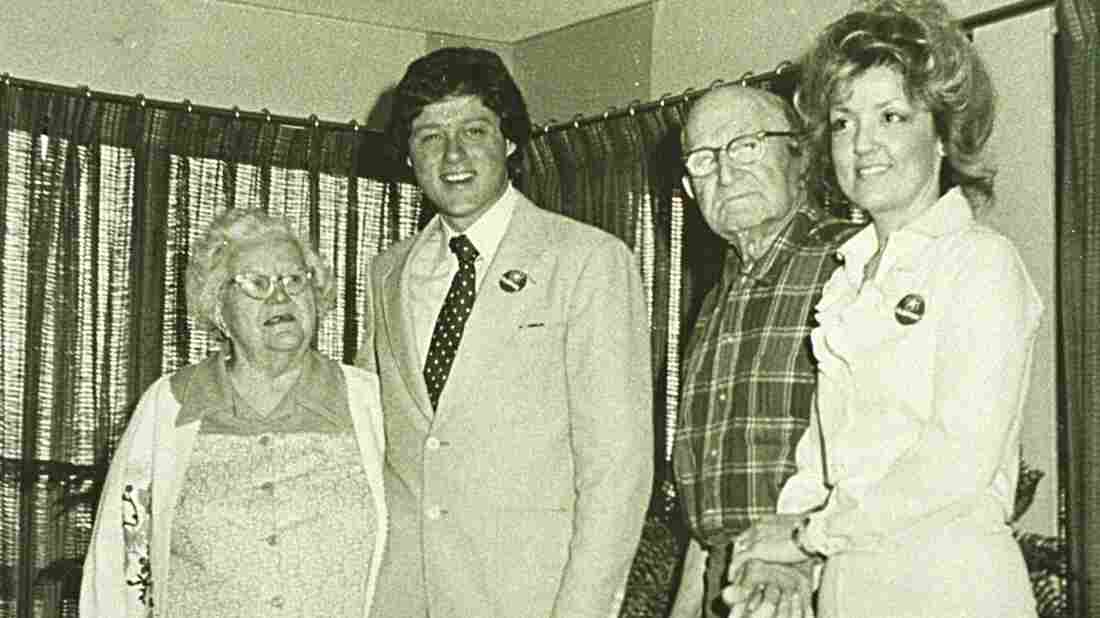 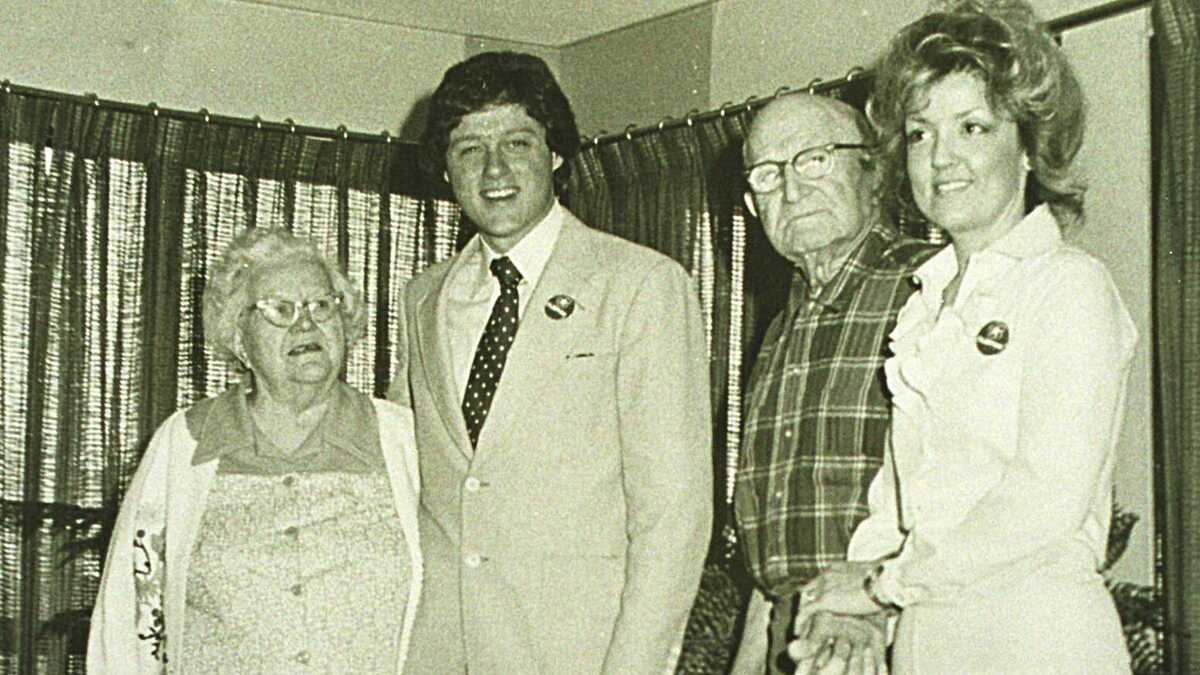 Juanita Broaddrick (right) says she met Bill Clinton (center left), then-attorney general of Arkansas, in 1978 at the nursing home where she worked in Van Buren, Ark.

In the middle of a maelstrom of criticism over remarks where he boasted about sexual assault, Republican presidential candidate Donald Trump is trying to turn the tables on his opponent.

On Sunday evening, just over an hour before debating Hillary Clinton in St. Louis, Trump broadcast a press conference-style event live on Facebook with Juanita Broaddrick, a now 73-year-old retired nurse, who alleges former President Bill Clinton raped her nearly 40 years ago and that Hillary Clinton helped him cover it up. Other women, including Paula Jones, joined as well.

In the video, Broaddrick said that while Trump was caught saying some inappropriate things about women in the leaked audio, "Bill Clinton raped me, and Hillary Clinton threatened me. I don't think there's any comparison."

"Hillary calls Trump's remarks 'horrific' while she lives with and protects a 'Rapist,' " Broaddrick tweeted Saturday. "Her actions are horrific."

Broaddrick's story is not new. Her allegations first surfaced as Bill Clinton was running for president in 1992. But it wasn't until 1999, and after recanting sworn testimony to the contrary, that Broaddrick went public. Now that she's back in the news, here's a brief rundown of Broaddrick's story:

In interviews, Broaddrick said she first met Bill Clinton around 1978. She was 35 and Clinton, who was the Arkansas attorney general at the time, made a campaign stop at the nursing home where Broaddrick worked.

In interviews with the Washington Post, Broaddrick said Clinton encouraged her to call his campaign office when she was in Little Rock. She did that and set up a coffee meeting with Clinton at her hotel. According to Broaddrick, Clinton told her there were too many reporters in the lobby of the hotel so they should have coffee in her room.

She said she ordered coffee and let him in her room. This is what she told the Post back in 1999:

"As she tells the story, they spent only a few minutes chatting by the window — Clinton pointed to an old jail he wanted to renovate if he became governor — before he began kissing her. She resisted his advances, she said, but soon he pulled her back onto the bed and forcibly had sex with her. She said she did not scream because everything happened so quickly. Her upper lip was bruised and swollen after the encounter because, she said, he had grabbed onto it with his mouth.

" 'The last thing he said to me was, "You better get some ice for that." And he put on his sunglasses and walked out the door,' she recalled."

Broaddrick was reluctant to tell her story. She declined opportunities to be interviewed for years and when investigators for Paula Jones, who also accused Clinton of sexual harassment, approached, she rebuffed them.

On Jan. 2, 1998, she provided those investigators with a sworn affidavit.

"During the 1992 Presidential campaign there were unfounded rumors and stories circulated that Mr. Clinton had made unwelcome sexual advances toward me in the late seventies," she said. "Newspaper and tabloid reporters hounded me and my family, seeking corroboration of these tales. I repeatedly denied the allegations and requested that my family's privacy be respected. These allegations are untrue and I had hoped that they would no longer haunt me, or cause further disruption to my family."

When Kenneth Starr was investigating Bill Clinton, in the late '90s, he approached Broaddrick and offered her immunity. She told BuzzFeed in an August interview that's when she decided it "was time to tell the full truth."

Her story became fully public with this 1999 Dateline NBC interview:

In it, she explained that she had not come forward with the story because she worried that no one would believe her.

Broaddrick had no witnesses but a friend of hers told reporters Broaddrick told her about the assault at the time.

At the time, Bill Clinton's lawyers denied the allegations. And according to the Washington Post's account, Starr decided he would not need Broaddrick's testimony because she told him that Clinton did not try to influence her.

As this election season came into full swing, Broaddrick's story came back into the spotlight. And Broaddrick alleged that Hillary Clinton tried to intimidate her.

In an interview given to the right-wing website Breitbart, Broaddrick said that weeks after the alleged rape, she met Hillary Clinton at a fundraiser for Bill Clinton.

Broaddrick took that as a threat that implied she should keep quiet.

What Clinton and her campaign have said

The Clinton campaign has not specifically addressed Broaddrick's story, but it has tried to discredit attempts to tie Hillary Clinton to Bill Clinton's scandals.

Back in January, Clinton spokesman Brian Fallon told the New York Times that those were attempts to "draw Hillary Clinton into decades-old allegations through recent fabrications that are unsubstantiated." He added that Clinton "has spent her whole life standing up for women, and charges to the contrary are grossly unfair and untrue."

A New Hampshire Republican state representative, Katherine Prudhomme O'Brien, told CNN she tried to get Clinton to address the Broaddrick allegations during a town hall in January. Clinton refused to take her question because, she said, Prudhomme O'Brien was "very rude."

CNN reported that during a campaign stop in New Hampshire in Dec. 2015, a woman asked Clinton what she would say to Broaddrick, Kathleen Willey and Paula Jones. Clinton responded, "Well, I would say that everyone should be believed at first until they are disbelieved based on evidence."