Accessibility links
Divided States: 4 Ohio Voters Weigh In After The Second Debate Did the second presidential debate — or the leaked video of Donald Trump making vulgar remarks about women — make a difference to four voters in divided Ohio?

Ohio has almost always voted for winning presidential candidates. The state has backed the winner in 28 of the last 30 presidential elections.

This year, the race is tight here, with some polls showing Democratic nominee Hillary Clinton modestly ahead and others putting Republican nominee Donald Trump in a slight lead.

Though many sectors of the economy have strengthened or recovered in recent years, manufacturing and union jobs have continued to struggle. With a union membership rate above the U.S. rate (Ohio's rate was 12.3 percent in 2015, compared with 11.1 percent in the U.S.), many of the state's workers will cast their ballots with economic policy and jobs in mind. Some traditionally Democratic-leaning union workers are open to considering the Republican nominee.

And there's another issue that could sway voters next month: propriety. A video from 2005 was leaked last Friday, showing Trump bragging about groping and kissing women. "Grab them by the p****. You can do anything," the Republican nominee said, using vulgar slang for the female anatomy. The video has led a number of Republican lawmakers to withdraw their support for Trump.

It's possible these revelations will further diminish Trump's support among white, suburban women, a key voting group this election year.

As part of NPR's Divided States series, Morning Edition traveled to Ohio and met with four voters of different political, religious and socioeconomic backgrounds to understand what issues were important to them ahead of the debate. On the morning after the debate, which included discussion of the 2005 video, we checked back in with them. (Click on the audio above to hear their thoughts on the 2005 video).

Two of the voters we spoke with are Clinton supporters, one is a Trump supporter and another is a lifelong Democrat who is leaning toward Trump.

Here are some of their thoughts after the second presidential debate. 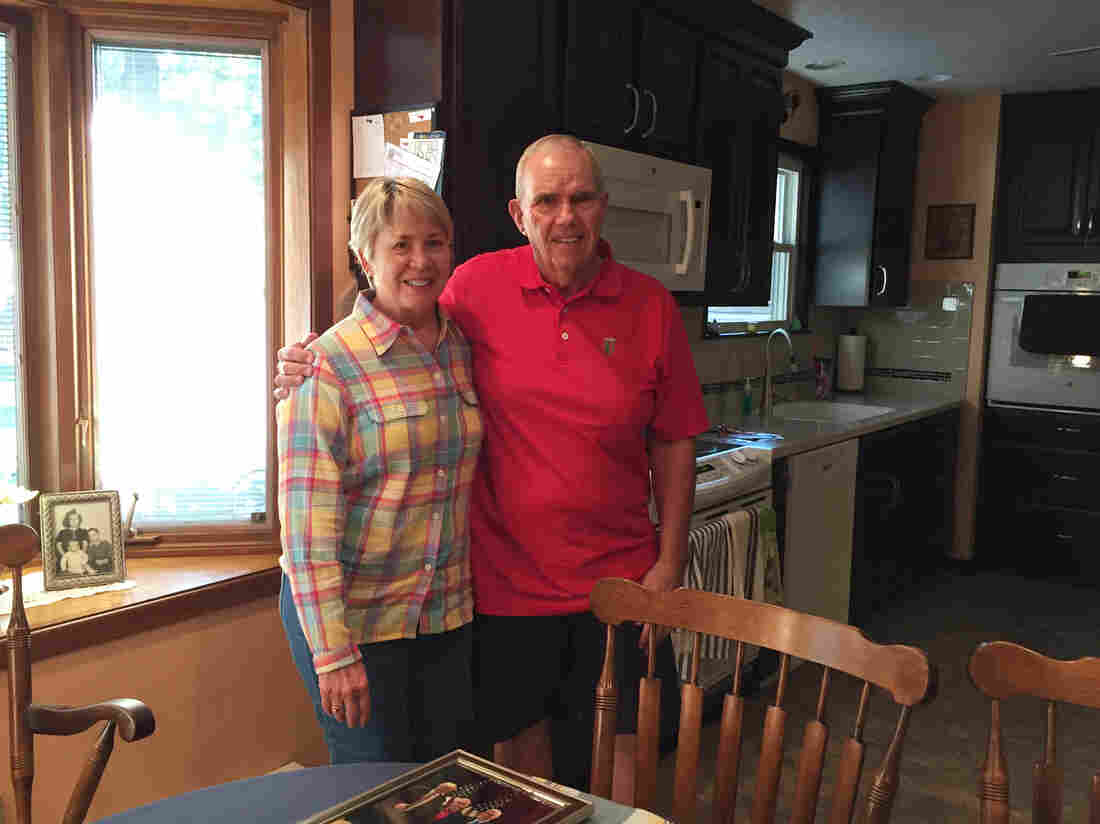 Retired plumber Marty Surella, with wife Karen, is a longtime Democrat who is leaning toward Trump, but remains undecided for now. M.L. Schultze/WKSU hide caption 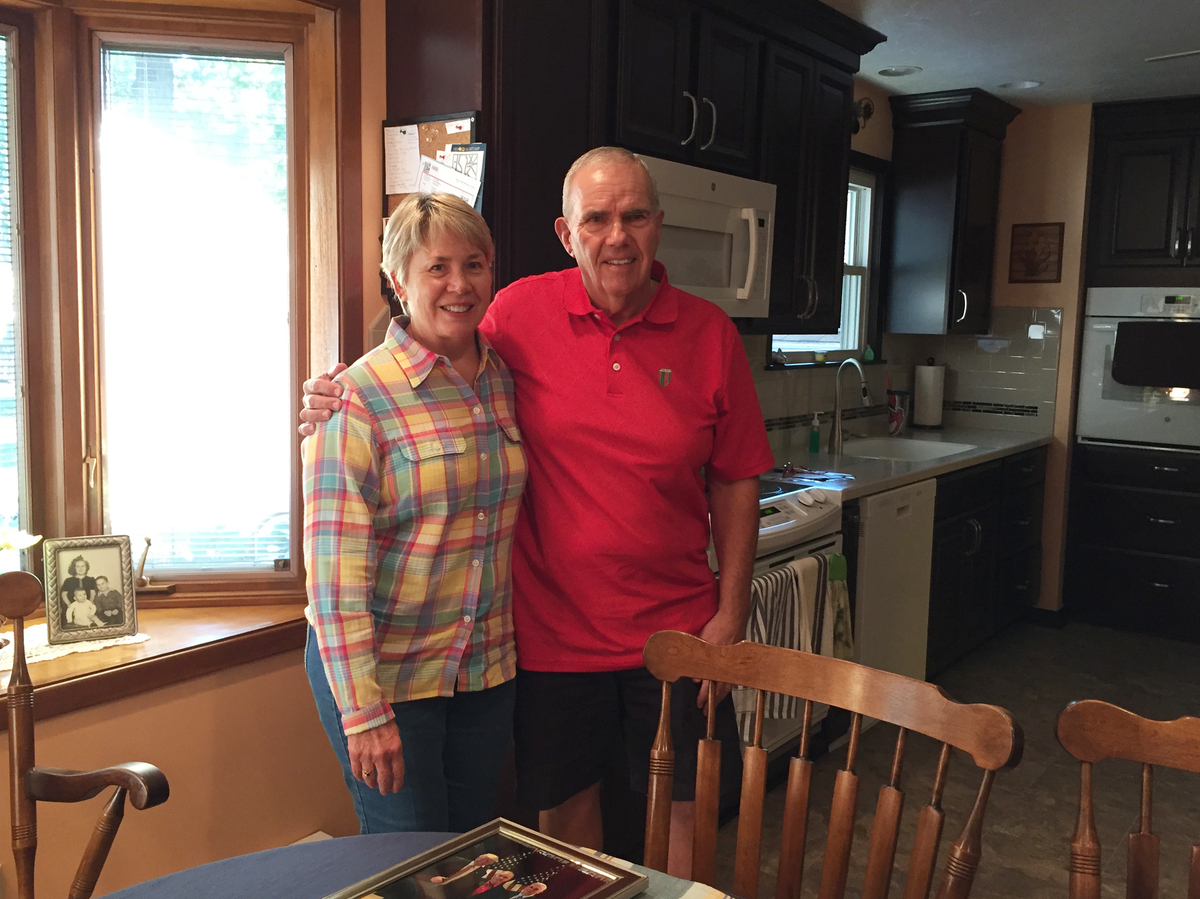 Retired plumber Marty Surella, with wife Karen, is a longtime Democrat who is leaning toward Trump, but remains undecided for now.

A lifelong Democrat and 50-year member of the Plumbers Union Local 55, Surella voted twice for President Obama, and for Hillary Clinton in the Democratic primary. He quit his membership in the NRA after the 2012 Sandy Hook Elementary School shootings. Surella is Catholic but does not oppose gay marriage. He believes Congress should have acted on Obama's Supreme Court nominee. But he is giving serious thought to voting for Donald Trump. (Hear his profile.)

"[Trump] is an outsider. And, you know, he's a loose cannon sometimes. But, you know, he seems to bring things to the table that I'm interested in. ... I think he's a law-and-order candidate. You know, if we don't get some law and order here and start straightening this out, this is going to be chaos. It's only going to be worse."

"I'm still shopping. [Trump] is an option. I'm not happy about [the leaked video], I think it's indefensible, but each one of these candidates comes to the table with quite a bit of baggage, in my opinion. So I'm still open and I want to hear the last debate before I make my decision. ... I wanted to hear about policy." 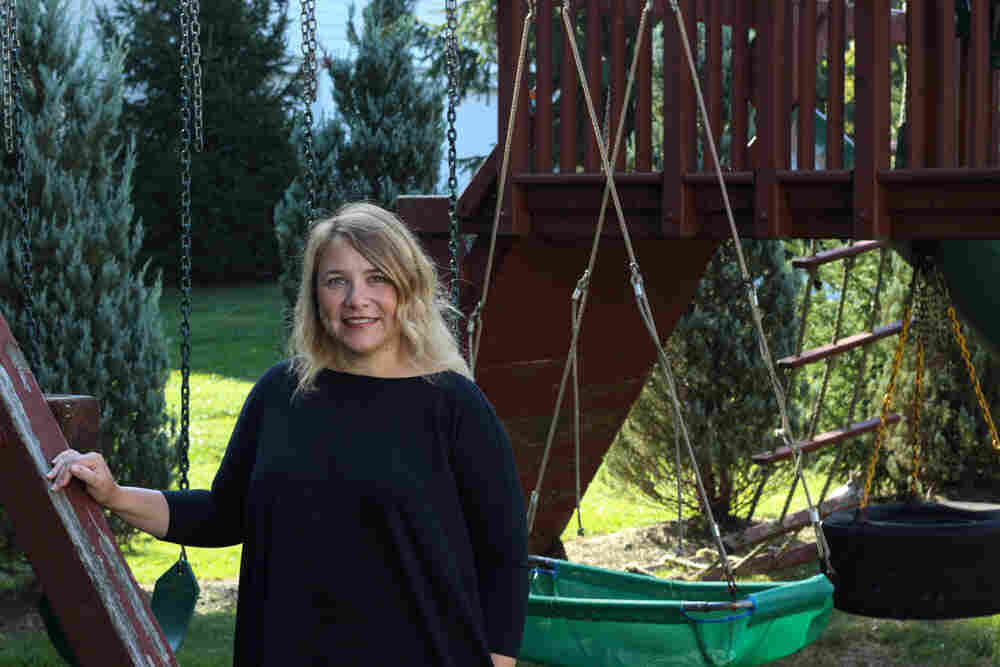 Republican Katie Rooney did not vote for Bill Clinton, but says she's felt "disenfranchised" from her party and plans to vote for Hillary Clinton. Esther Honig/WOSU hide caption 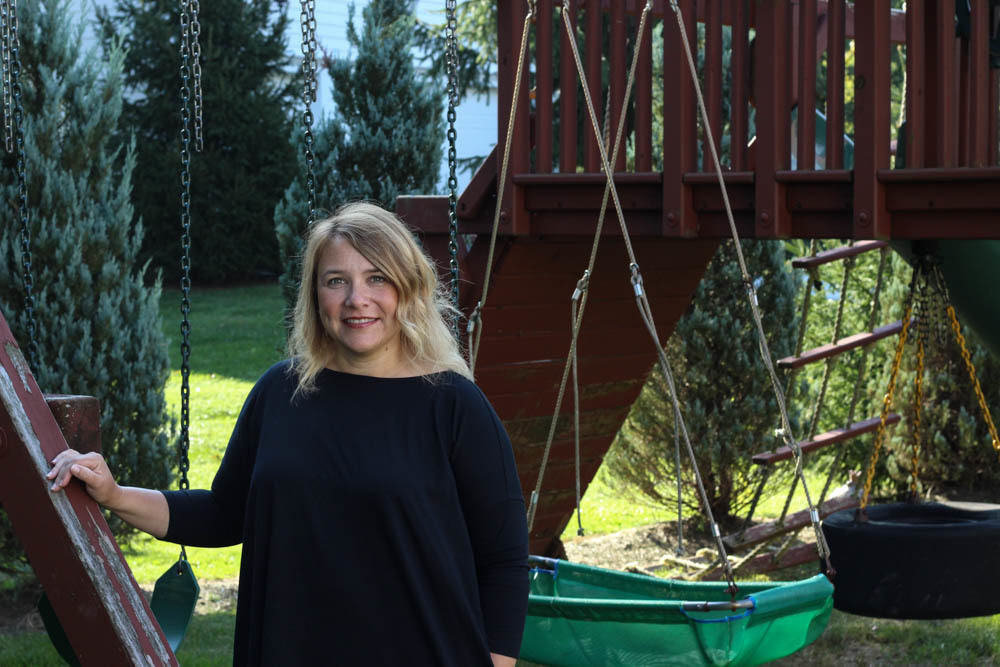 Republican Katie Rooney did not vote for Bill Clinton, but says she's felt "disenfranchised" from her party and plans to vote for Hillary Clinton.

Rooney, who lives in an affluent Columbus suburb, is a mother of three and a lifelong Republican. But she's voting for Hillary Clinton. (Hear her profile.)

"I was born and raised in a Republican family and I have mostly identified with the Republican Party. And I have found myself very disenfranchised over the last several elections and don't really feel like, although I say I'm a Republican, [I] may not necessarily line up with the views of the Republican Party, at least not my views. ... I am a lifelong Republican and I will be voting for Hillary Clinton. ... I did not vote for Bill but I will vote for Hill."

"I saw somebody pretending that what it means to be presidential is to look like a bully. I wouldn't tolerate that sort of behavior on the playground with my children, let alone in the highest office in the land. I felt that [Trump's] predatory behavior and circling and constantly interrupting was offensive to everyone." 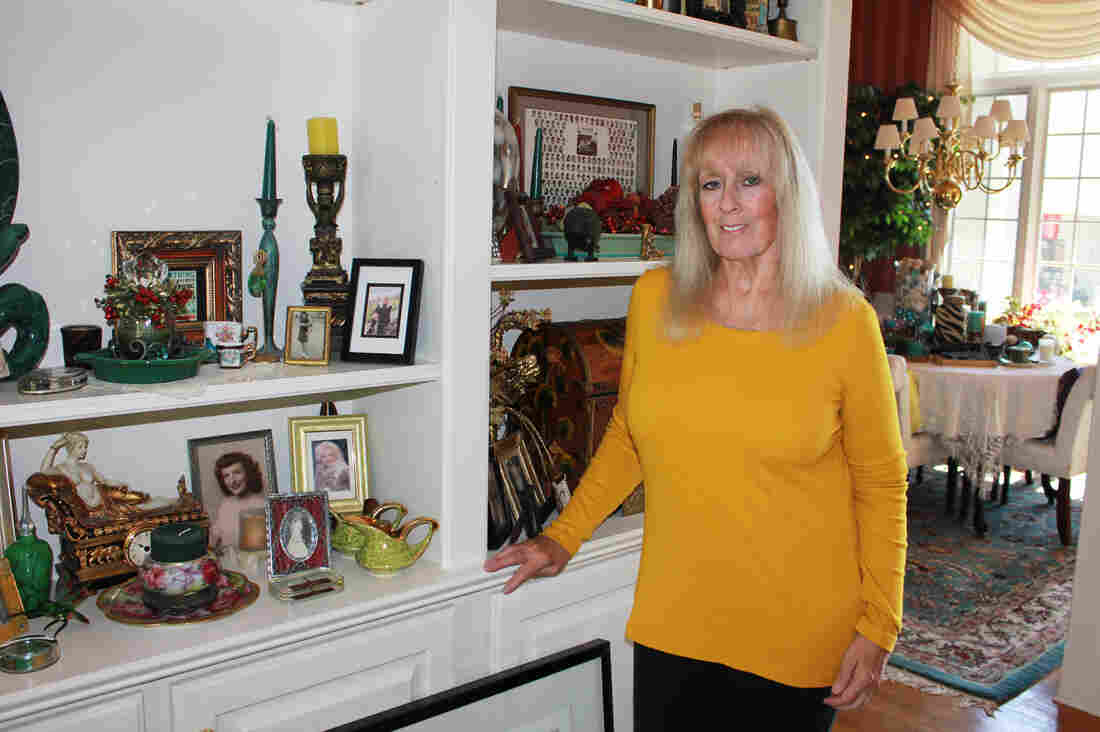 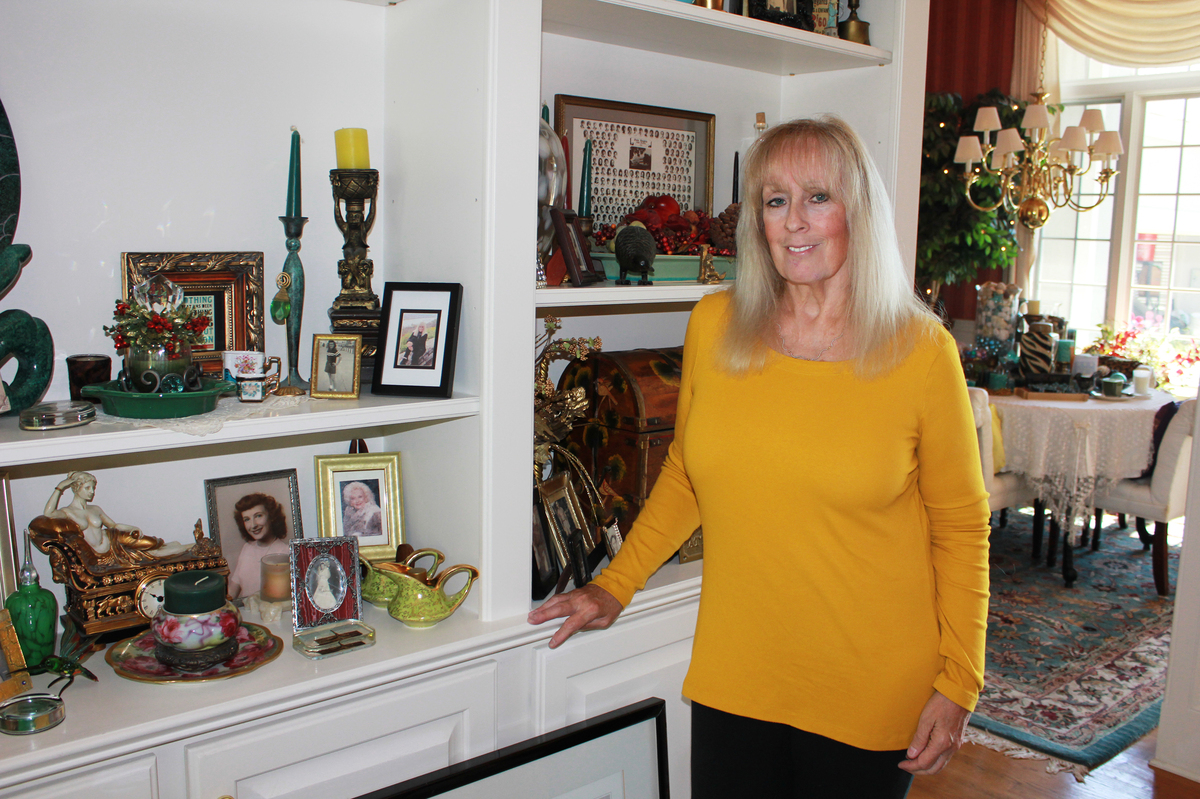 Caudill, who is divorced, has been a Republican for decades. She is Catholic, a gun owner and opposes abortion. She owned four branches of Allstate Insurance. She worries about Ohio's heroin problem. Caudill has volunteered for the Trump campaign, organizes Trump supporters at busy Cincinnati intersections and distributes lawn signs to passersby. (Hear her profile.)

"The only people really who are having an issue with [the video of Trump] are the Hillary people and the traitor Republicans such as Rob Portman, John McCain, Jeff Flake, all those people are the ones who are having the issues with this ... I've been to bachelorette parties that I've heard women talk about things. ... I mean, men talk about those things. It's just, that's the way it is." 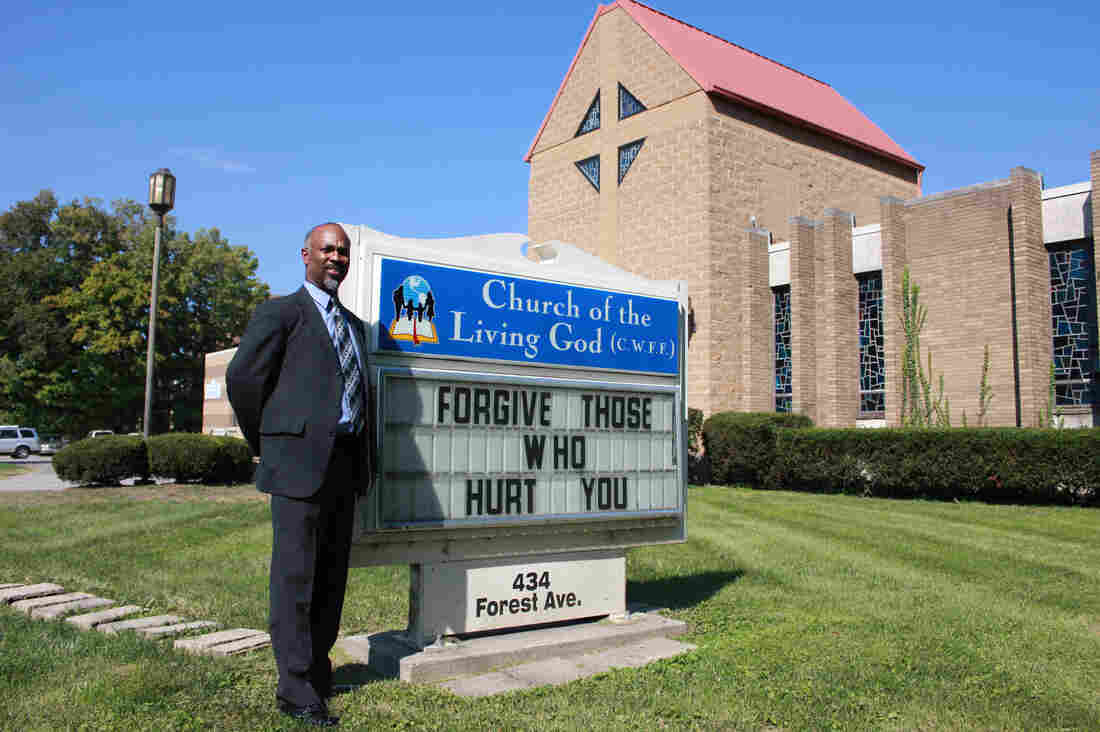 Ennis Tait, the pastor at Cincinnati's Church of the Living God, worries that as an African-American, he wouldn't have a place in Donald Trump's America. Arezou Rezvani/NPR hide caption 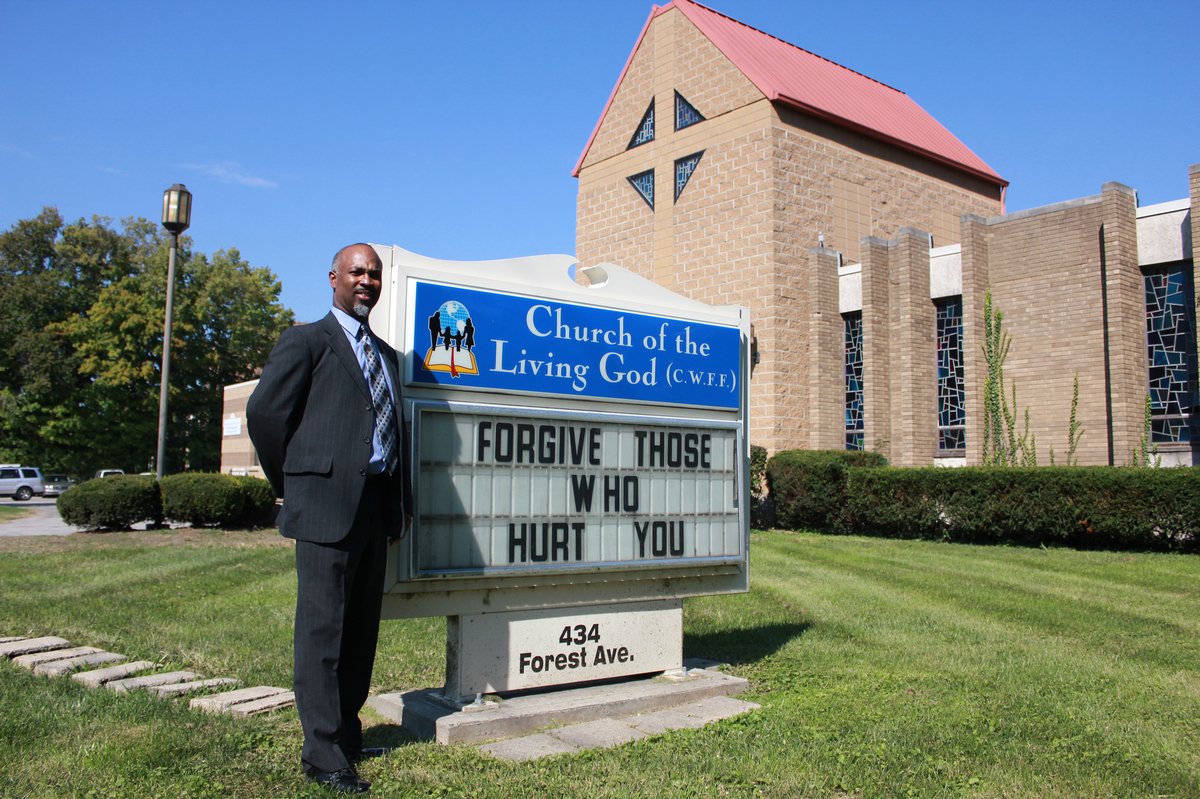 Ennis Tait, the pastor at Cincinnati's Church of the Living God, worries that as an African-American, he wouldn't have a place in Donald Trump's America.

Tait's church, founded by a former slave in the 1800s, is in Avondale, a Cincinnati neighborhood that is home to hospitals and renovated houses, but has also been struggling with poverty and crime. Tait views the passage of the Affordable Care Act as one of the most important developments in his life. It allowed him and his family to obtain health insurance after being without it for five years. The father of four, originally from Mississippi, supports Hillary Clinton. (Hear his profile.)

"I don't believe that Donald Trump has intentionally created a lot of tension, racial tension, but I believe that his statements have opened the door for a lot of people to come out of their hiding places."

"I don't think that in the last 10 years African-Americans have had a place in any of America. ... [That's] because the America that we know now doesn't even accept President Obama as their president. If you can't accept one president, and you can come along and say that we can bring America back together, it's a false statement."