Accessibility links
Second Presidential Debate: Hillary Clinton And Donald Trump Spar, But No Knockout Is Delivered While it could be said Donald Trump upped his game in Sunday's debate, he still did not reach the level at which the carefully prepared and rehearsed Hillary Clinton has functioned in both debates. 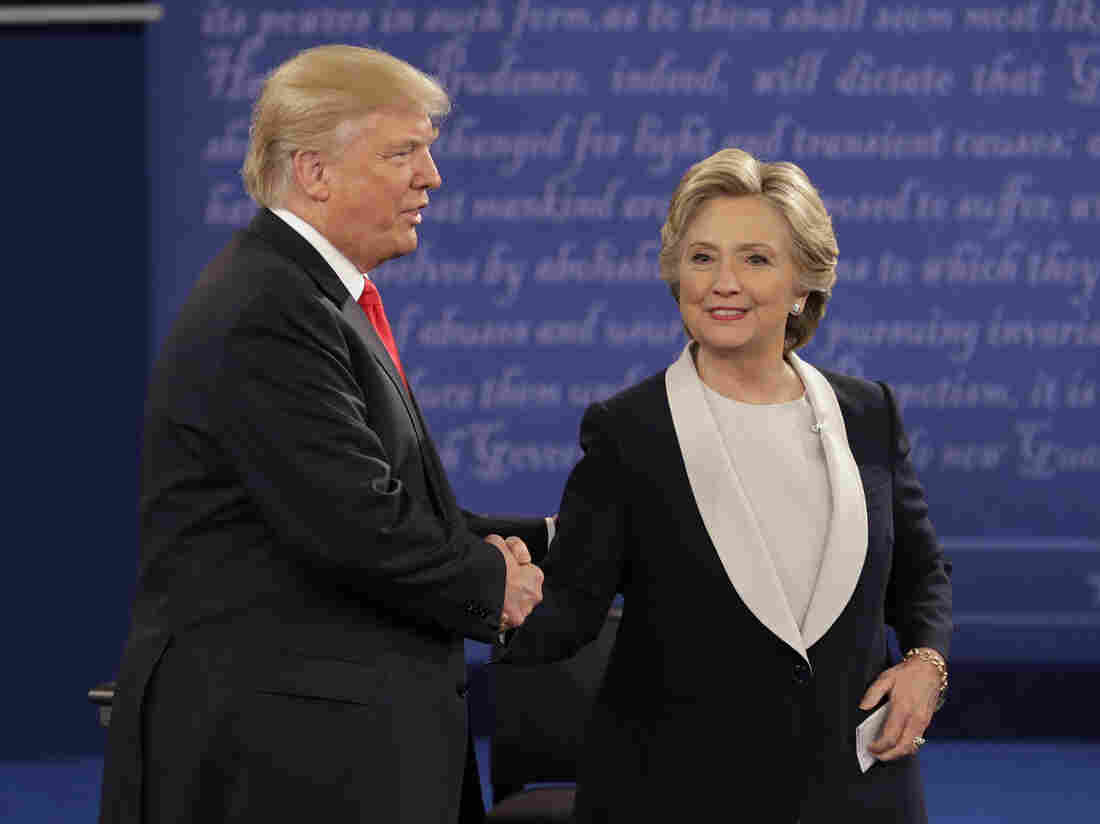 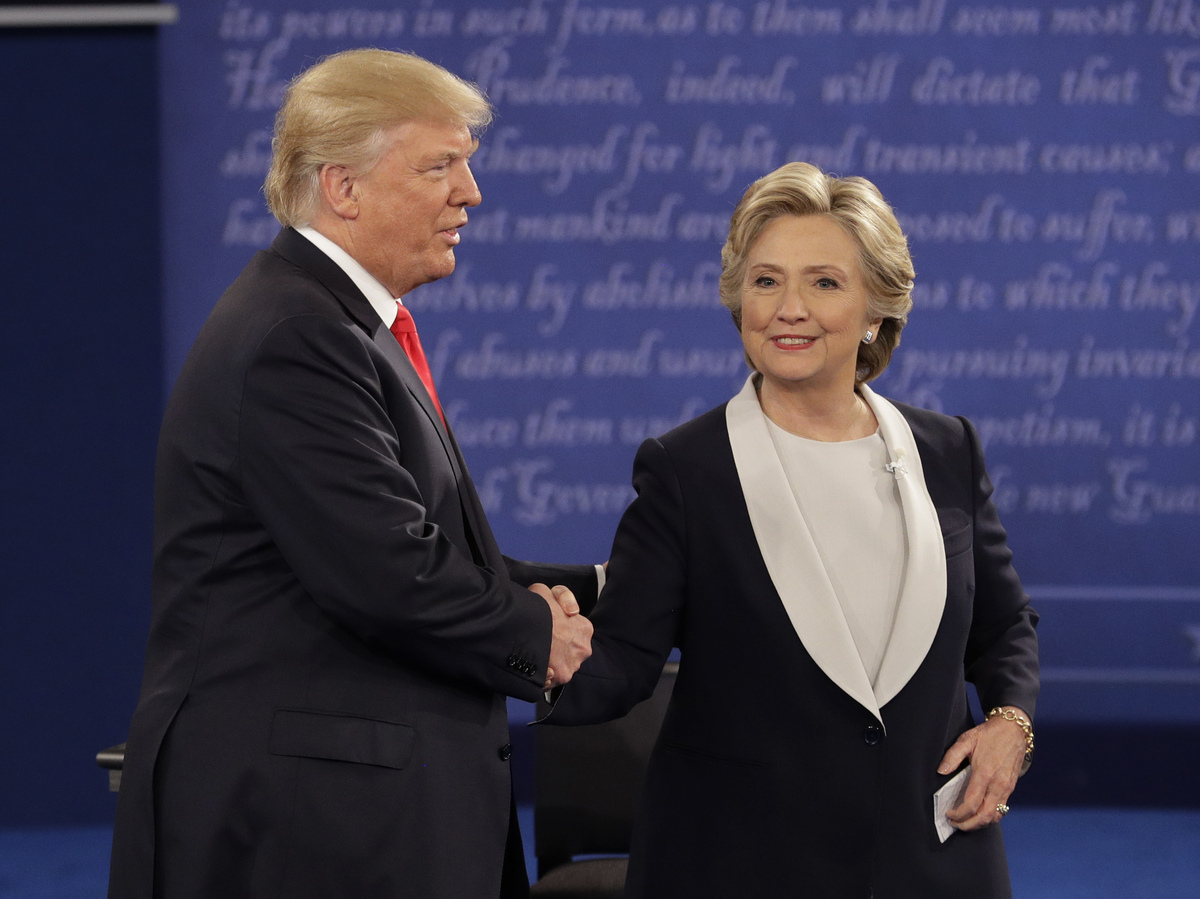 The second debate between presidential candidates Donald Trump and Hillary Clinton promised a great deal and managed to deliver on much of it. But those expecting either to see Trump knocked out of the race or to see him dramatically reverse the current campaign momentum went away disappointed.

The Second Presidential Debate In 100 Words (And 6 Videos)

It could be said this meeting had the highest stakes ever for any single debate, even as it set new lows for the level of personal attacks.

Many questions hovered over the proceedings at Washington University in St. Louis: How would Trump deal with the fallout from a videotape released Friday in which he brags about treating women in ways that amount to sexual assault? Would he denounce the dozens of notable Republicans who have deserted his cause in the past two days? Would he be contrite and seek the voters' forgiveness?

Or would Trump fight back with allusions to the sex scandals of Clinton's husband, Bill Clinton, when he was president? Just before debate time, Trump held an impromptu news conference on Facebook Live, flanked by four women. Three had accused Bill Clinton of assaulting them in the past — one as far back as 1978. The fourth had objected to the way Hillary Clinton, as a court appointed attorney, had once defended the man accused of raping her when she was 12. All of these stories had been the subject of extensive reporting when Bill Clinton was president in the 1990s.

And there were other compelling story lines as well. Would the moderators hold Trump's feet to the fire on taxes or Clinton's on her email server? What might be made of the latest email trove released by WikiLeaks over the weekend? Had Clinton really told a Wall Street gathering that a policymaker needed a private position as well as a public position on a given issue?

The debate was held Sunday night over the course of 94 minutes — and many of the hovering questions were addressed, if not answered. There was also time for questions from the auditorium audience and social media users who submitted their queries online.

The debate moderators, veterans Martha Raddatz of ABC and Anderson Cooper of CNN, relayed questions from the Internet and called on audience members to present their own. It made for a more interactive experience for the tens of millions watching the debate on TV or online. Both candidates chose to walk to the edge of the stage at times to address the questioner, who was often just a few feet away.

The candidates were asked whether they were providing good role models for the young. Both said they were but that their opponent wasn't. Soon, the conversation turned to the videotape and then to Trump's charges against Bill Clinton.

Another questioner wanted to know how the candidates would fight Islamophobia, another asked if they would be "devoted" to treating all kinds of people equally. Other questions went to the Supreme Court vacancy, the need for balanced energy policy, the crisis in Syria and the state of the economy.

At the end of the debate, a man named Karl Becker asked both candidates to cite something admirable about their opponent. Clinton promptly said she admired Trump's children. Trump just as quickly said: "She's a fighter. ... she doesn't quit." At that point, the debate ended and the two moved toward each other at center stage. There they, finally, shook hands. (They didn't shake at the start of the debate.)

Grading On A Curve?

One way to sum up the clash of the candidates would be to say they both performed about as well as could have been expected under the circumstances.

That may be a case of "grading on a curve," but the test itself was all but unprecedented. One candidate came in with a major videotape crisis raging, his campaign in emergency mode and high-profile desertions among supporters in the headlines. Many in his own party were calling on him to withdraw as the nominee.

The other candidate came in knowing some of the most painful moments in her marriage were about to be thrown in her face with her husband's accusers in the room, staring straight at her.

Doing as well as he did represented an improvement for Donald Trump by comparison with his flawed and damaging performance in the first debate. Trump was getting proper credit for this from many quarters Sunday night, as GOP officials showed considerable relief. There was no more talk of forcing him off the ticket, or of Mike Pence bailing out as running mate or Kellyanne Conway leaving the campaign.

Trump's campaign retinue seemed especially pleased that he had shown more seriousness, focus and self-control than in the first debate. Yet he persisted in describing various policies and other aspects of the world in ways contradicted by facts and analysis. As usual, he relied on the starkest and most superlative terms. He used the words disaster and complete disaster more than a dozen times. He said if elected he would do everything he could to put Hillary Clinton in jail.

He said Clinton was "by far the biggest beneficiary" of the Citizens United decision by the Supreme Court. That 2010 ruling opened floodgates for corporate and union money in politics and has been vehemently opposed by Clinton and President Obama. It has been supported by Trump and his running mate.

Trump also spoke of record traffic in drugs across the Mexican border, offering no support for the claim. He wandered back into the thickets of the "birther controversy." And in all these subject areas he offered no evidence or arguments other than rhetorical questions and assertions delivered with a flourish.

And if, with all these considerations, Trump could still be said to have upped his game, he still did not reach the level at which the carefully prepared and rehearsed Clinton has functioned in both debates.

Among other attributes, her showing has featured an array of "listening faces" that she shows to the split-screen reaction cameras. No matter what Trump said, she kept her gaze on him while maintaining a dignified and thoughtful expression — allowing an occasional smile to beam through when he said things she seemed to think were obviously off the mark.

So Did Anyone Win?

One more question hanging over from Sunday night was the ultimate effect of this debate on the voters. Trump had to be pleased with the debate because his very candidacy had seemed on the brink. He told Twitter and several reporters that he would not quit. But it took Sunday night to make that real.

Just getting back on the debate stage with Clinton probably helped Trump stabilize his campaign, at least for the moment. "Stopped the bleeding" was a common motif on social media and in TV conversations. In all likelihood, the rush to the exits among party people will slow or stop as a result of this debate.

One caveat: There has been talk of additional videotape from various sources that might emerge in the days to come. That could put a fresh edge on the weapon Clinton and others have used against Trump.

Speaking to MSNBC commentator Chris Matthews on Sunday, Trump campaign manager Conway caught attention by saying she would stick by Trump "to the bitter end — unless ..." She later said that "unless" meant unless a family crisis called her away.

Some commentators gave Trump credit for his demeanor but faulted his grasp of facts. Some found Clinton had reverted to her hectoring, lecturing style after freeing herself from it in the first debate. Others said she once again showed superior mastery of the issues, managed her own presentation well and won on points.

Quickie polls and focus groups by the various news organizations broadcasting the debate gave an edge to Clinton — but not as much as after the first debate. Evidence indicates the first debate helped Clinton move up a notch or two in national soundings, while also strengthening her position across all the battleground states (where either candidate has a solid shot at winning).

The only polling done since the release of the 2005 videotape has shown little if any change in Trump's support. But campaign pros caution that it may take several days for the effects of that tape, or Sunday's debate, to show up in the polling data.