Accessibility links
From Cooks To Accountants: Hilton Extends Paid Parental Leave To All The growth in paid parental leave has largely left out hourly employees. But the Hilton hotel chain this year extended it to all its workers. Demand by millennial employees helped drive the decision. 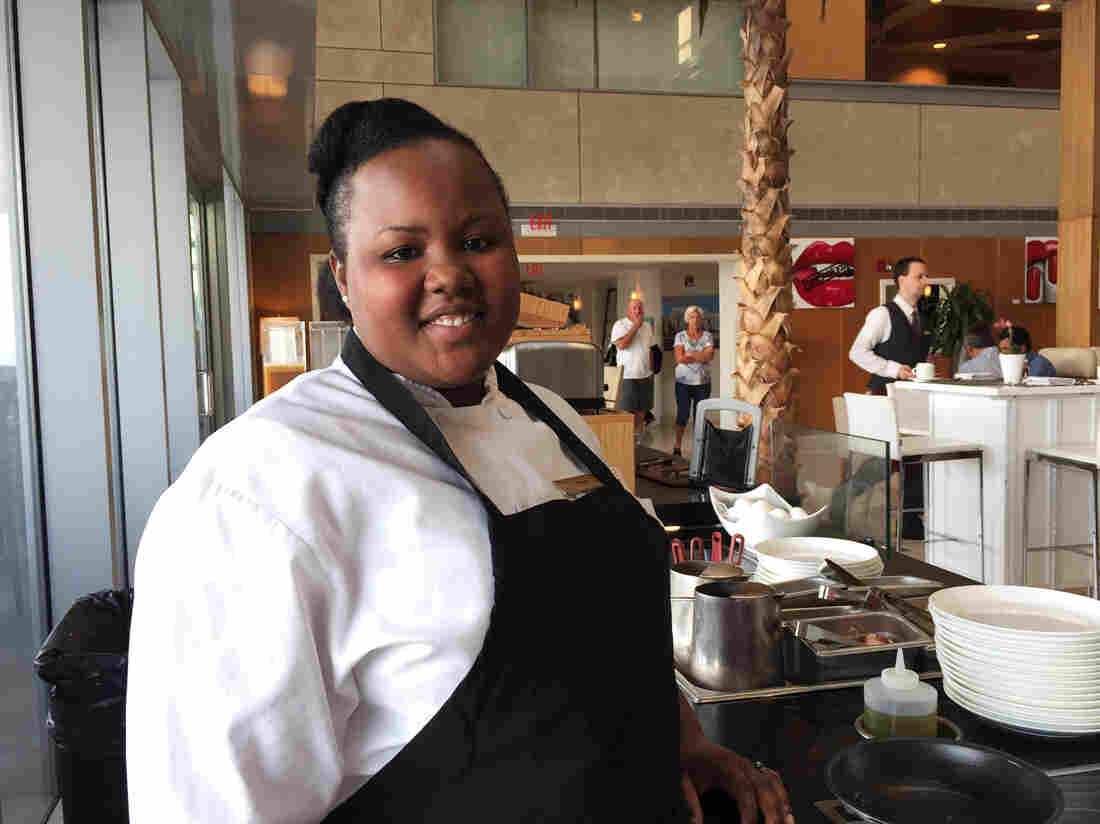 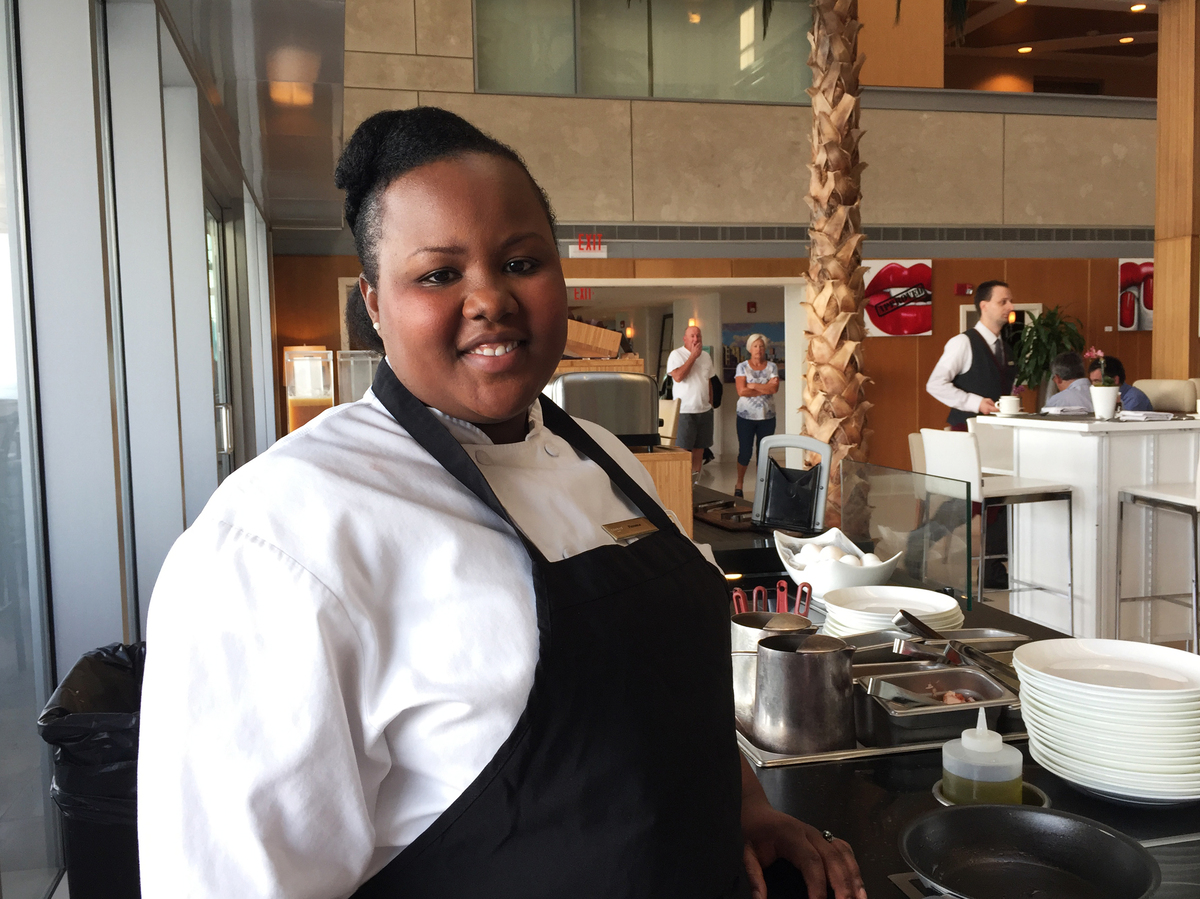 In the two-story breakfast room on the 25th floor of Hilton's Conrad Miami, Florance Eloi mans the omelet stand in front of a panoramic view of the sunrise over the Atlantic Ocean. The bubbly Miami native says, laughing, that guests routinely tell her, "Stop making the omelets, you need to turn around and look!"

When Eloi, 31, found out she was pregnant late last year, she wondered how she would balance her job with a baby. She was lucky to have a few weeks of paid vacation, since about half of lower-wage workers do not.

Still, it would be hard to come back to work so soon. And if she stayed home longer without a paycheck, Eloi says, she and her husband would have had to dip into savings.

Then Eloi's manager told her some good news: By the time Eloi gave birth, a new policy would guarantee her 10 weeks of fully paid parental leave.

Recent years have seen a boom in paid parental leave in parts of corporate America. Silicon Valley, especially, is in a benefits war to diversify and attract female workers, with companies announcing new leave policies or expanding existing ones.

But overall, the Labor Department says only 13 percent of workers in the private sector have paid parental leave, and by far, most of them are white-collar professionals.

By contrast, this year Hilton Hotels and Resorts began offering paid parental leave to all of its 40,000 U.S. "team members," from top managers to those who clean guest rooms or serve them breakfast, like Eloi.

"There was absolutely no peer pressure in this regard," says Matt Schuyler, the chief human resources officer for Hilton Worldwide. "In our industry we are first and now quite out in front with respect to this."

He says the new policy was driven by employee demand. Millennials — adults younger than 35 — are nearly half of Hilton's workforce and will soon be three-quarters. Research, including Hilton's own surveys, shows that both millennial women and men care a lot about paid leave.

But while advocates give Hilton props, they say the policy is a little stuck in the past. Men get only two weeks of leave, far less than women. And the leave can only be used to care for a new child. (Adoptive parents get two weeks.)

Advocates also talk of a looming "caregiving tsunami" as the population ages and more workers must tend to older parents. They say it's becoming best practice to offer broad paid leave policies that employees can use for all kinds of family caregiving.

Schuyler says he doesn't rule out changes at some point. Meanwhile, he says Hilton has also introduced a 10-day advance scheduling policy and — starting next year — will reimburse employees for adoption expenses, up to $10,000 per child.

Schuyler says another push for Hilton was that it operates globally and saw the disparity in policies. The company provides paid parental leave in most countries it does business in, so "it wasn't an unnatural thing to administer," he says. With the growing push for paid leave in the U.S., the company decided "let's not wait for the mandate, let's do the right thing."

One possible hitch: Hilton has not budgeted extra money for this. If there were, say, a baby boom in housekeeping at a particular hotel, Schuyler says the manager there would have to cut back elsewhere to pay for temp workers. That's probably far more feasible for a multinational company than it would be for a small business.

In Eloi's case, her boss, chef Virgile Brandel, says filling in for her was easy. He cross-trained the rest of the staff members who work the morning shift.

"They all know the [omelet] station and they can rotate every day," he says.

Eloi says she intended to work until her due date last March.

"But of course," she says, "I didn't know, first-time mom, how tired and fatigued I'd be."

She says it became hard to stand all day, so she stopped working one week before the birth. She also wrapped in vacation time, taking a total of 13 weeks off, and says it was a lifesaver.

Her husband is a chef at a local restaurant and has no paternity leave. She is grateful for the time to bond with her son, Caleb, getting "to know him, what makes him cry, what makes him calm." 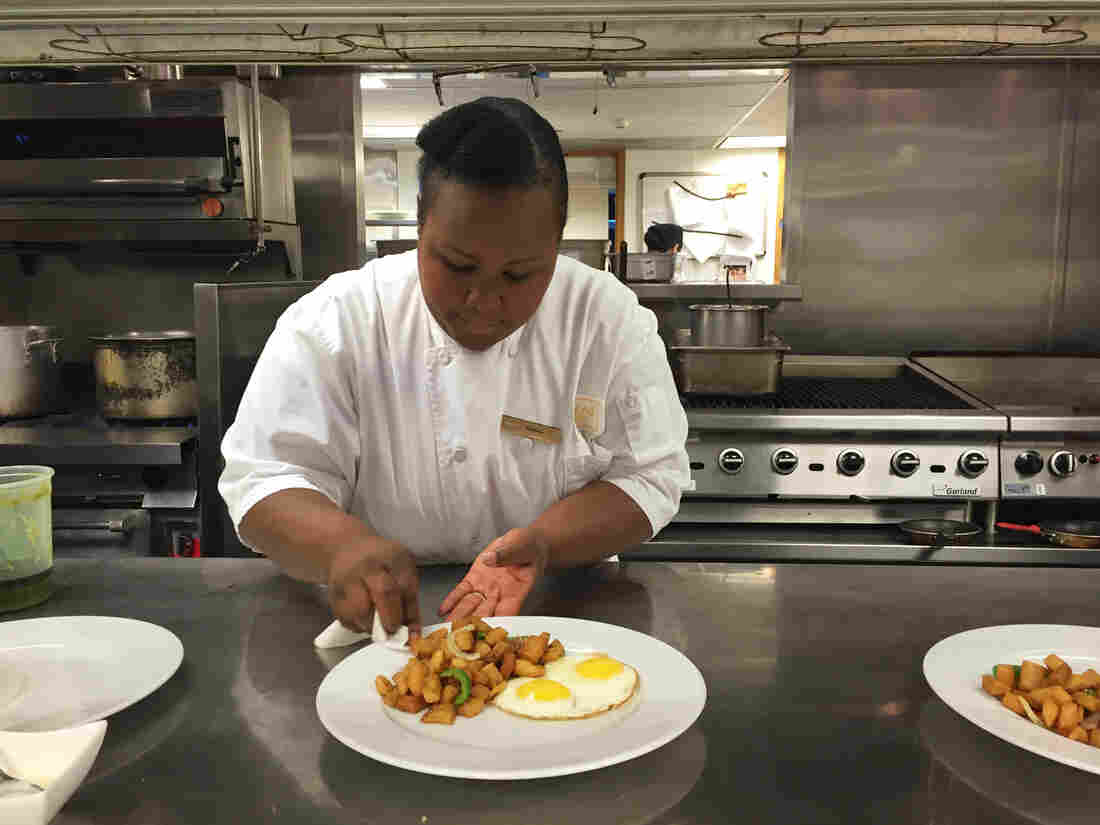 Florance Eloi preps a dish at Hilton's Conrad Miami. Eloi received 10 weeks' paid leave when she had her baby. The Labor Department says only 13 percent of workers in the private sector — and even fewer among hourly workers — have paid parental leave. Jennifer Ludden/NPR hide caption 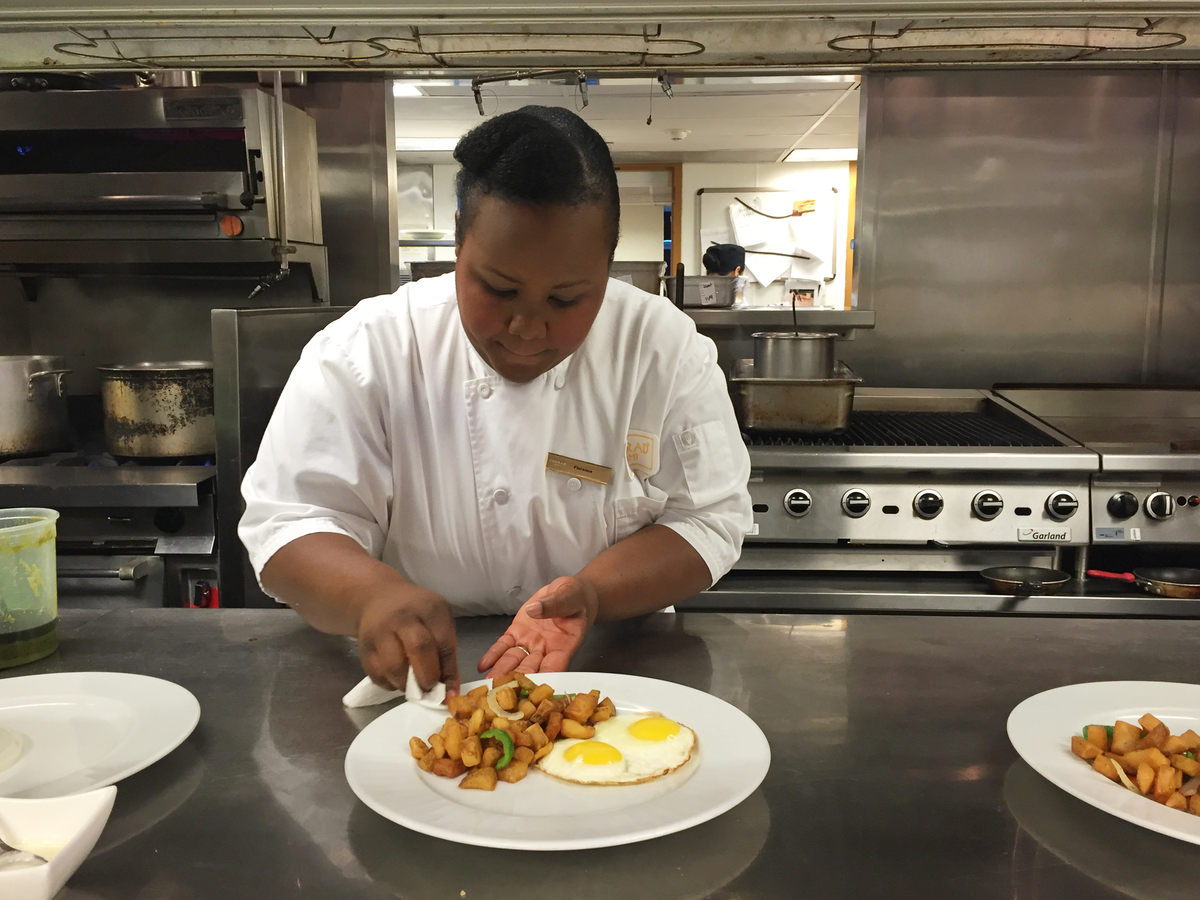 Florance Eloi preps a dish at Hilton's Conrad Miami. Eloi received 10 weeks' paid leave when she had her baby. The Labor Department says only 13 percent of workers in the private sector — and even fewer among hourly workers — have paid parental leave.

There may be no bigger sign of the shift on paid parental leave than the fact that both presidential candidates are proposing it.

Donald Trump calls for six weeks for women, paid through unemployment insurance. Hillary Clinton wants 12 weeks, for both men and women, funded by a tax increase.

"The conversation has really shifted," says Vicki Shabo, vice president at the National Partnership for Women and Families. She has seen it change over the past half-dozen years, as several states and a string of cities have passed their own paid parental or family leave policies.

"I think the private sector's anticipating that policy changes may be coming," she says, "and trying to get ahead of that curve."

Editor's Note: Hilton Hotels is among NPR's financial supporters. But NPR makes its own decisions about what stories to cover and how to report them. (The Conrad N. Hilton Foundation, a family foundation that also supports NPR, is not connected to the hotel chain.)