Accessibility links
In 'Singing Bones,' An Artist Recasts The Grimm Tales — Literally Illustrator Shaun Tan puts his skills to a new test in The Singing Bones. He's taking the familiar Grimm fairy tales and condensing each one down to a single, wordless photo of one of his sculptures. 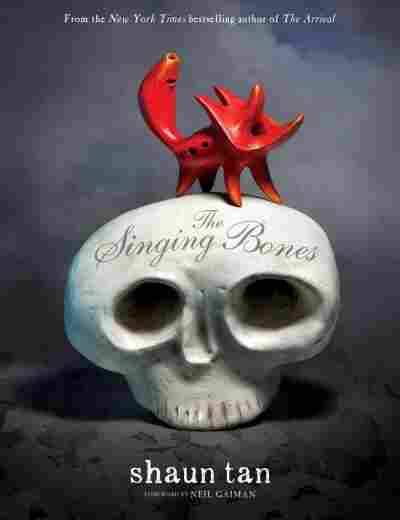 Some artists seem to be in an ongoing contest with themselves. Take Australian creator Shaun Tan: In 2006's The Arrival, he built a dense black-and-white world that told a story without any words. For the 2010 short film The Lost Thing he took on animation and won an Academy Award for it. Now, in The Singing Bones, he's set yet another bar — make that bars — for himself. He's turned for inspiration to some of the most heavily trodden stories in folklore, the Grimm fairy tales — and he's put his skills as a sculptor front and center and photographed his own creations. Any artist would find just one of these tasks challenging, much less all three at once.

First there's the oh-so-familiar source material. Can it really be possible to find yet another way to tell — or, in this case, show — the stories of Hansel and Gretel, Rapunzel and the 12 dancing princesses? Tan writes convincingly in his afterword about why he was drawn to the Grimm corpus, about its importance in his childhood and in the culture as a whole, but it still feels as though he took up this subject matter as a kind of bet with himself. The results are charming, intriguing and thoroughly nervy. Inspired by Inuit stone carvings and pre-Columbian clay figurines, he uses sculptures "about the size of an orange" to strip each fairy tale of its encrustations of language and distill it into a single iconic image.

With the most familiar, most worn tales, those little sculptures create a striking sense of awakening. Tan wields the principles of abstraction to make them resonate in all new ways: Snow White and Rose Red are capering mischief-makers with aerodynamic, shovel-shaped heads. Hansel and Gretel are barely human emblems of blind greed, loomed over by a Picassoesque witch. Rapunzel (as noted by Neil Gaiman in his thoughtful introduction) is both girl and tower at once, buttery ribbons of hair rippling over her plinth.

With the most familiar, most worn tales, those little sculptures create a striking sense of awakening.

Then there are the lesser-known stories. As envisioned by Tan, these acquire a new sense of inevitability. For "The Three Snake Leaves," Tan has sculpted a face with a Modigliani nose, its eyes and mouth covered by gold leaves. It's timeless, peaceful, ethereal. In fact, its mood is utterly at odds with its source material (helpfully summarized, with the other 74 stories, at the end of the book) which features an adulterous, murderous queen and her seafaring paramour. But Tan's sculpture gives weight to the other, less gaudy subject of the story: The eternal power of love and grief.

For this project Tan used the most humble of materials, primarily paper mache and air-drying clay. He painted the sculptures with acrylics and dabbed them with oxidized metal powder, wax and shoe polish. It's clear that, as he worked, a big part of him was poised in the observer's role — he writes about his process as a purely detached critic, one who's both an art historian and a folklorist. "The resistance of clay in particular at a small scale encourages simplicity, especially where the key tools are blunt fingers and thumbs," he notes. "Faces and gestures are abbreviated, just like characters in the tales themselves."

Tan's self-critical stance comes through in the book's overall format. The carefully staged and lit photos give each sculpture the look of a museum exhibit — an effect he was aiming for, he notes in the afterword, and one with a complicated impact on both viewer and artist. The best of these little orange-sized works make outsize statements. Iron Hans glares beautifully/horribly. The titular character of "Bearskin" defies the laws of bodily physics in a warm yellow spotlight. And Tan has managed to paint "The Singing, Springing Lark," "Little Farmer," "King Thrushbeard" and many others to look like real fired pottery.

There are some missteps here. Some of the sculptures are too busy ("The Old Man and His Grandson"). Others are indefinably out of sync with the feel of the whole book ("Hans My Hedghog"). Sometimes, as in "The Elves," Tan's style veers a little too close to that of his admitted influence Tim Burton. But these are small losses. Tan's contest with himself will presumably continue. Fortunately for his fans — both those of his previous efforts, and new fans won over by this delightful book — he'll probably keep winning.