Accessibility links
Oregon Community Becomes Unwilling Symbol For Anti-Government Movement The trial for the militants who seized the Malheur National Wildlife Refuge in Oregon this year is close to wrapping up. The standoff traumatized and divided nearby Burns, Ore. 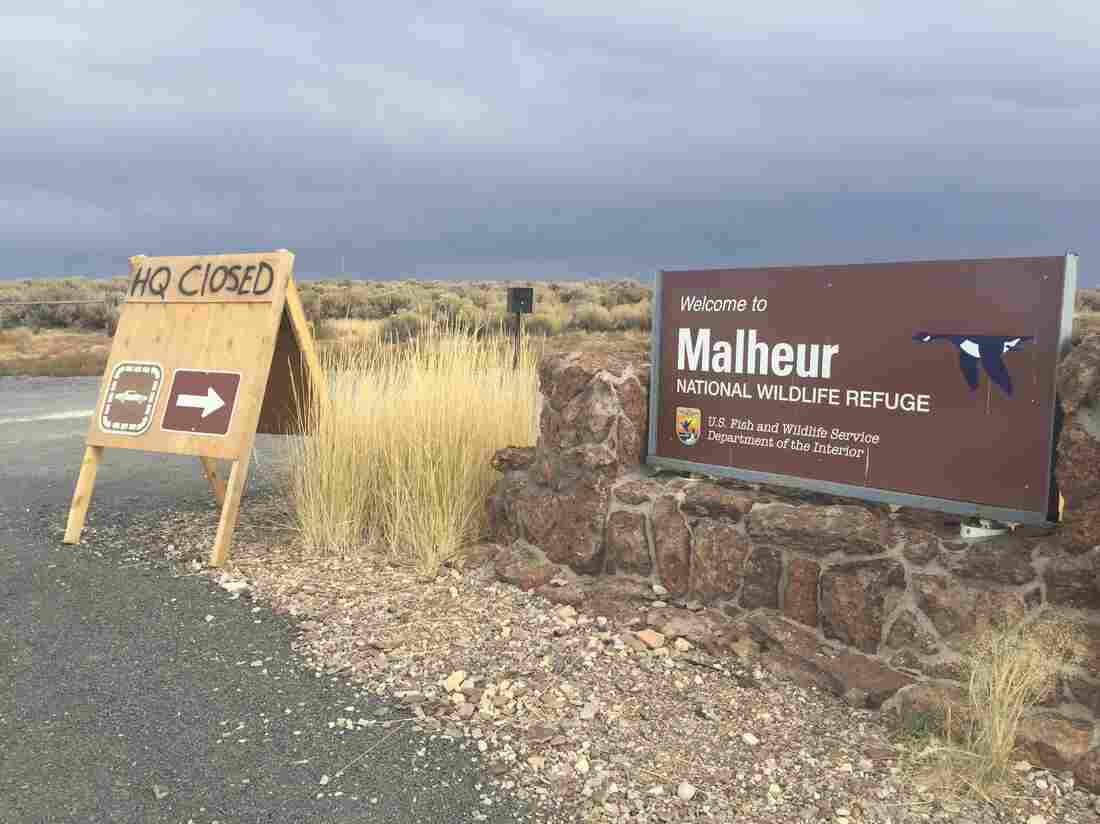 Months after a 41-day siege on the Malheur National Wildlife Refuge, some facilities there remain closed due to ongoing security concerns. Kirk Siegler/NPR hide caption 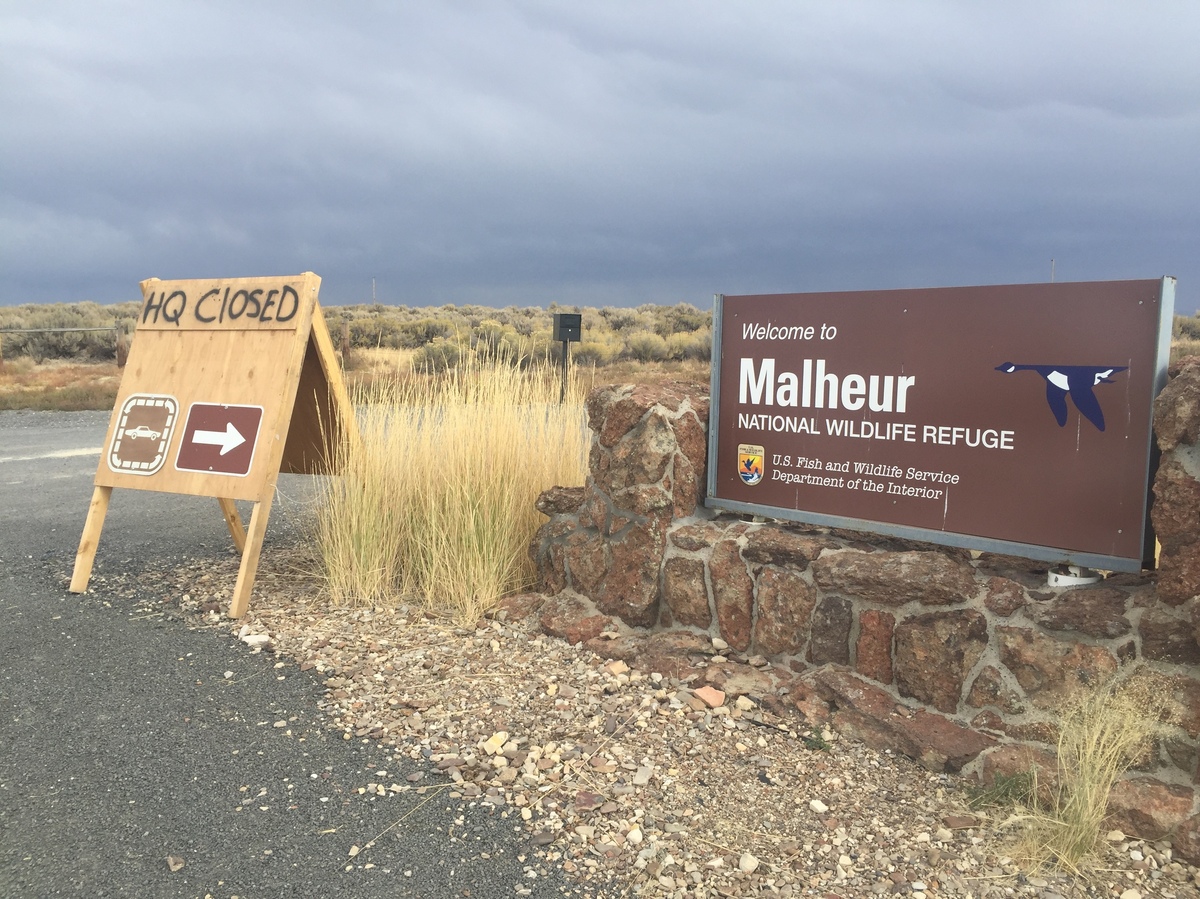 Months after a 41-day siege on the Malheur National Wildlife Refuge, some facilities there remain closed due to ongoing security concerns.

On a recent Saturday in Burns, Ore., Cheryl Smith decided to have a little fun. Dressed as a farmer in a floppy hat and overalls, she joined other costume-clad ranchers, loggers and miners on a flatbed float passing through the center of town during the annual Harney County Fair parade.

They waived American flags and passed out pocket-sized copies of the U.S. Constitution while standing above a sign reading "Endangered Species: Who's Endangered? The People and Our Way of Life."

The Endangered Species Act is a familiar target of Ammon Bundy and his militia supporters, who came to Oregon's remote Harney County and took over the Malheur National Wildlife Refuge earlier this year. Even though the occupiers were arrested more than eight months ago, it's clear their message is still resonating with people like Smith in this rural outpost. The trial for the militants is close to wrapping up.

"I hope they'll be acquitted," she says. "I don't believe the charges." 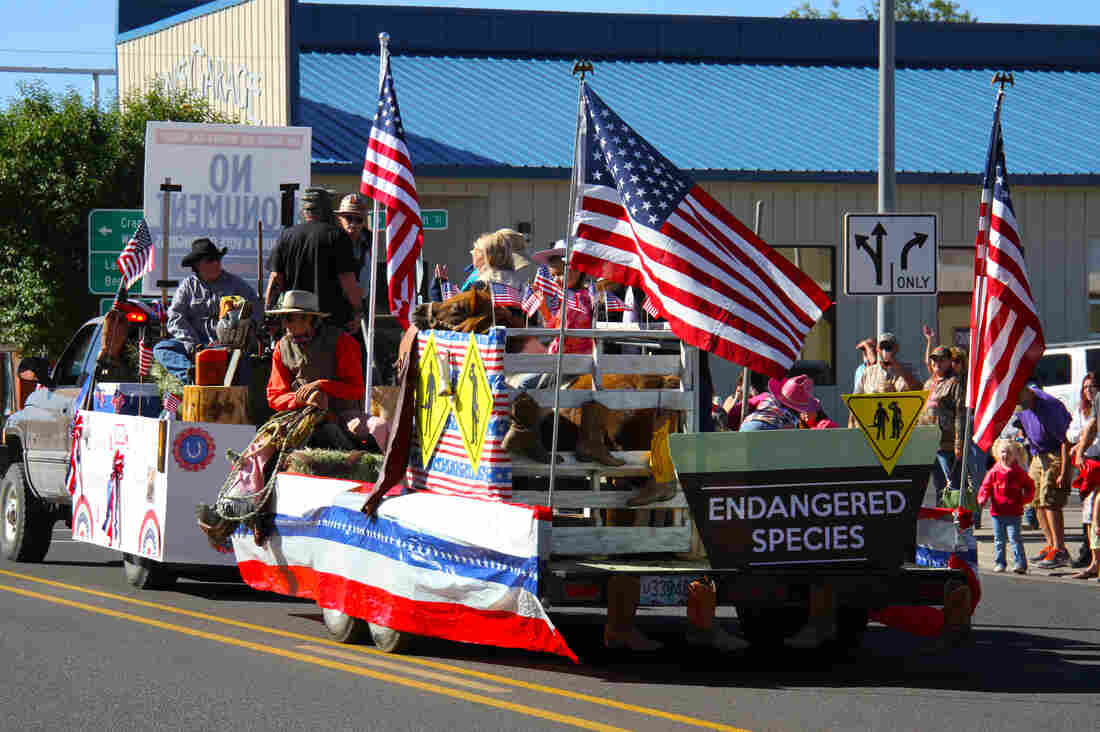 A float with costume-clad ranchers, loggers and miners passes through the center of Burns, Ore., during the annual Harney County Fair parade. Amanda Peacher/OPB hide caption 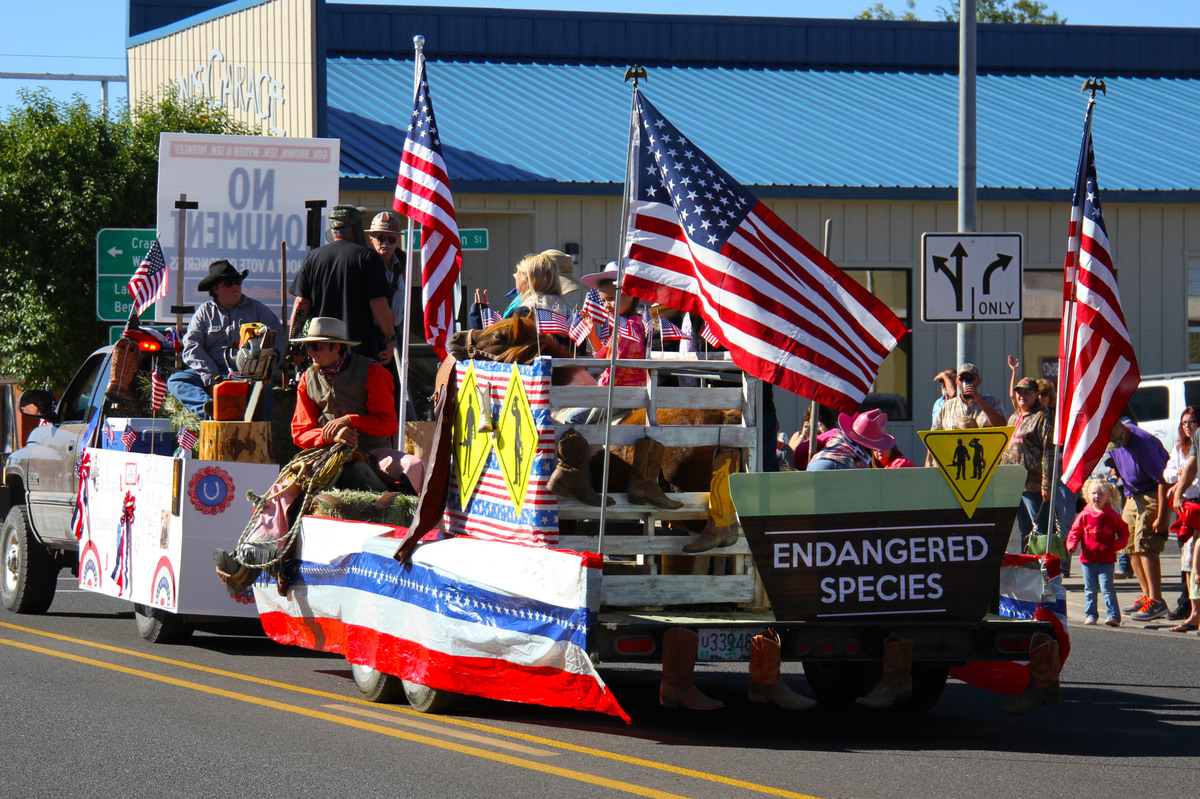 A float with costume-clad ranchers, loggers and miners passes through the center of Burns, Ore., during the annual Harney County Fair parade.

Roughly the size of Maryland but with a population of about 7,000, Harney County found itself in the international media spotlight during a 41-day siege at the refuge 30 miles south of Burns. At the time, the militants pledged to stay until the quiet, high desert refuge was turned over to local control.

It's been a high-profile trial about an occupation that has torn the town of Burns apart. There are people in the community who, like Smith, support the idea behind the siege. But the vast majority still bemoan the fact that their tight-knit community — and the Malheur National Wildlife Refuge — are now a symbol of the anti-federal government movement.

When the parade float of Bundy supporters went by Judge Steve Grasty, the head of Harney County government, he turned his back in protest when Smith's float passed by on the street.

"I don't care about Bundy," Grasty says. "He came in used us, used our community."

Getting the 'ranchers back to ranching'

The siege at the refuge was just the latest armed confrontation over the federal government's ownership — and control of — millions of acres of federal lands in the West. Bundy and six others are now in a federal courtroom 280 miles away in Portland facing conspiracy charges. And Cliven Bundy, the family patriarch and leader of the movement, is also in custody in Nevada on similar charges stemming from a standoff at his ranch in 2014.

So far the trial for the Oregon occupiers hasn't focused on the issue of federal lands or the aftermath for the community that unwillingly hosted the occupation because the judge says the effects on Harney County aren't relevant to the conspiracy charges. 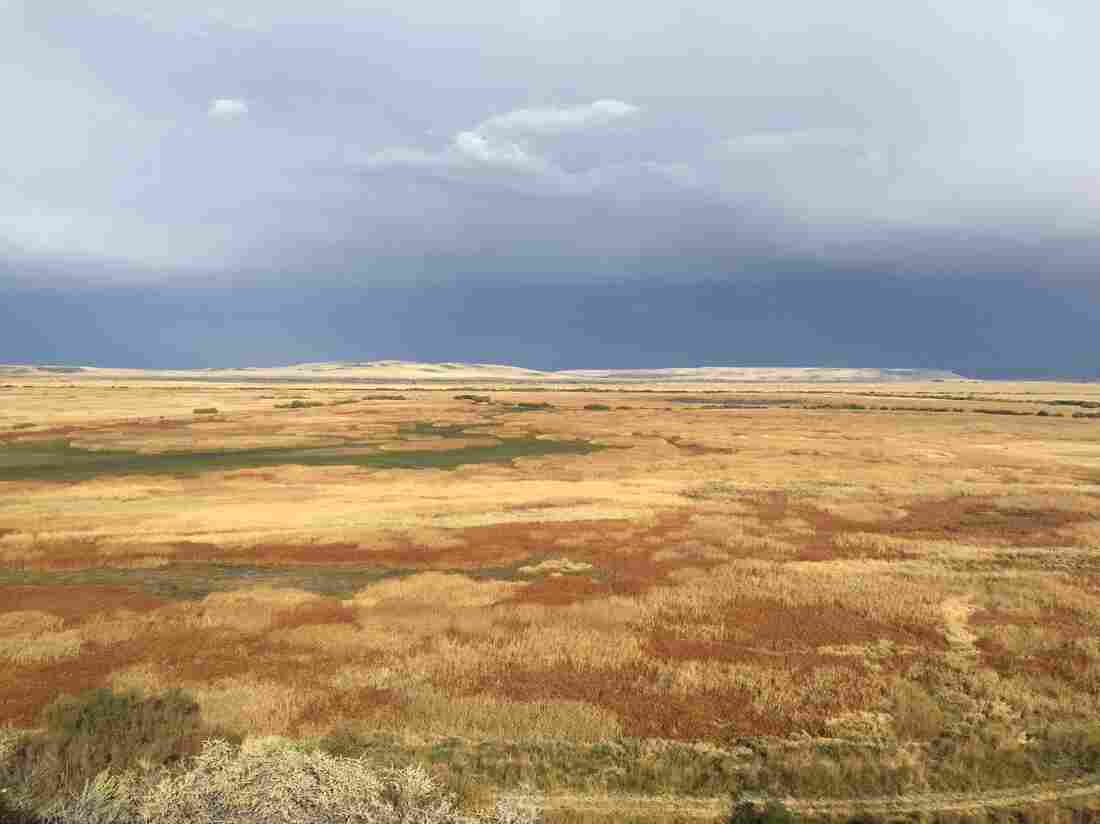 First protected by President Theodore Roosevelt, the Malheur National Wildlife Refuge is one of the most important migratory bird corridors on the U.S. West Coast. Its lush grasses and wetlands are also important for local cattle ranchers. Kirk Siegler/NPR hide caption 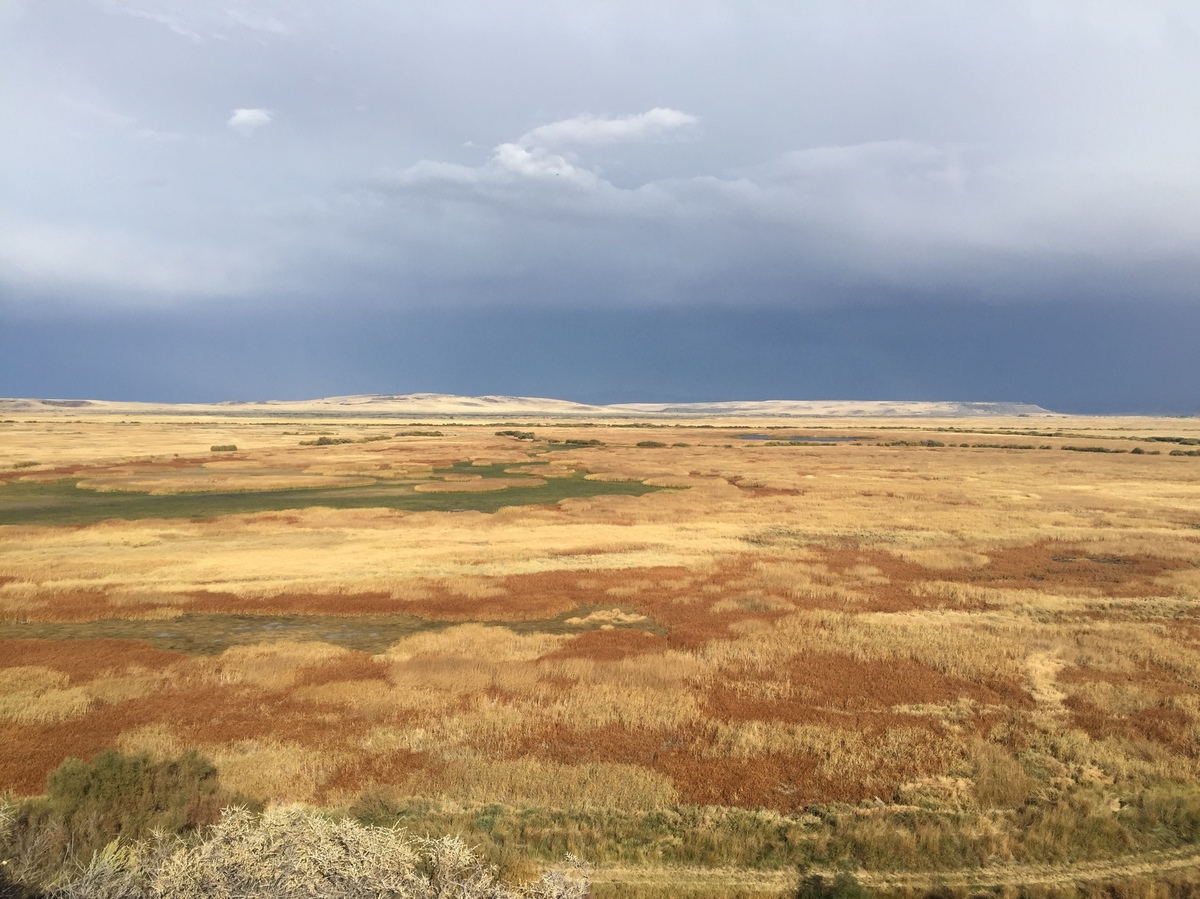 First protected by President Theodore Roosevelt, the Malheur National Wildlife Refuge is one of the most important migratory bird corridors on the U.S. West Coast. Its lush grasses and wetlands are also important for local cattle ranchers.

"I think it's kind of unfair in a way," says Liz Appelman, a retired federal worker who lives in Burns. "We went through a whole lot in a short amount of time. Where does Harney County get its justice?"

But for Smith and a handful of others in Harney County, the occupiers' message of getting "loggers back to logging and ranchers back to ranching" felt like an awakening.

"I do not in my heart believe at any point they were confrontational," Smith says. "They weren't here to hurt or harm, they were here to educate."

Like a lot of people in Burns, she remembers a far different time here. There used to be several timber mills in the county. She once worked in one. There was more land available for cattle grazing. Burns had a thriving downtown, and Harney County had some of the highest average wages in all of Oregon.

Those days are gone.

"I'd been feeling like I've become an ostrich and I'd had my head in the sand because I didn't feel like I had any power," Smith says. Bundy's arrival energized her.

Still, a majority of residents didn't support the occupation that was mostly staged by outsiders, and they didn't appreciate strangers telling them what to do.

That opposition appears to have gotten bigger and more vocal since the trial began in September.

This past summer, Bundy sympathizers organized a recall vote against Judge Grasty to try and unseat him from office. It was easily defeated, and Grasty said his community is now moving forward. Still, in his home just outside town, he keeps a shotgun at the ready near his front door. It's been there since the Bundy's first arrived in Burns.

"This occupation kind of drove a wedge in the community," says Jess Wenick, an ecologist at the refuge. "It's hurt relationships, it's divided churches."

The occupation also divided Wenick's family, literally. In January, he was moved to a U.S. Fish and Wildlife Service regional office in Portland while his young family moved in with his parents in Burns due to safety concerns.

The refuge has since partially reopened. But some of his colleagues — biologists at the refuge — have since requested transfers or quit because the climate in the county toward federal employees remains tense after the occupation. Some locals told NPR they've even seen some outside militia and Bundy sympathizers starting to trickle back into the county since the start of the trial.

For Wenick, it's a sad chapter for his hometown.

"It seems that a lot of the people that were against the government and stood very, very strongly were completely unaware of all the things that had been taking place over the years and how the community actually came along beside the refuge," Wenick says.

Wenick is proudly referring to something you hear a lot in Harney County: After decades of fighting about land issues on the refuge, ranchers and conservation groups and the government had started to find common ground recently on everything from protecting native ancestral lands to managing wildfires and livestock grazing allotments.

For rancher Gary Miller, the story of Harney County is pretty much the antithesis of the version the Bundys told.

"What I've found interesting, a lot of people that are talking about federal lands and government overreach and [grazing] permits, don't even have a permit," he says.

One recent cold, drizzly morning, Miller and his sons drove hundreds of cattle across a highway toward the Malheur National Wildlife Refuge, where they have permits to graze. On horseback, wearing frayed leather chaps and a worn black hat, Miller is a quintessential image of an American cowboy. His family has ranched in Harney County for more than a hundred years. 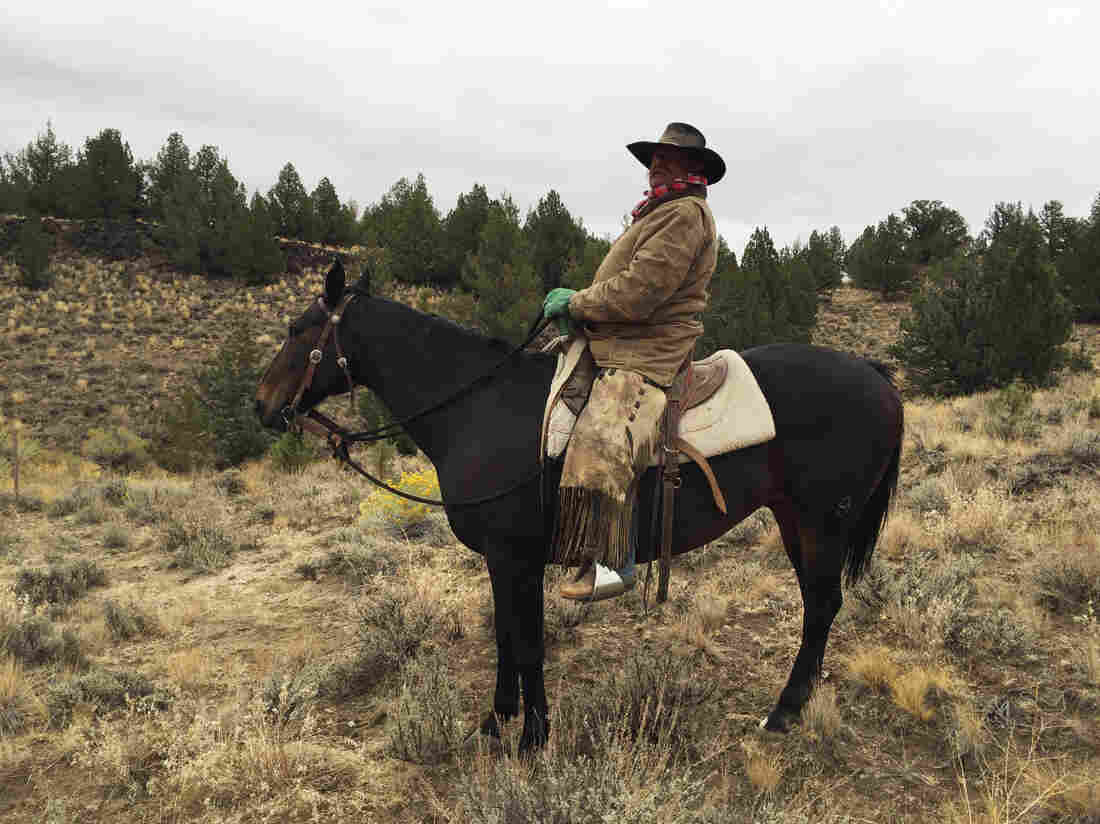 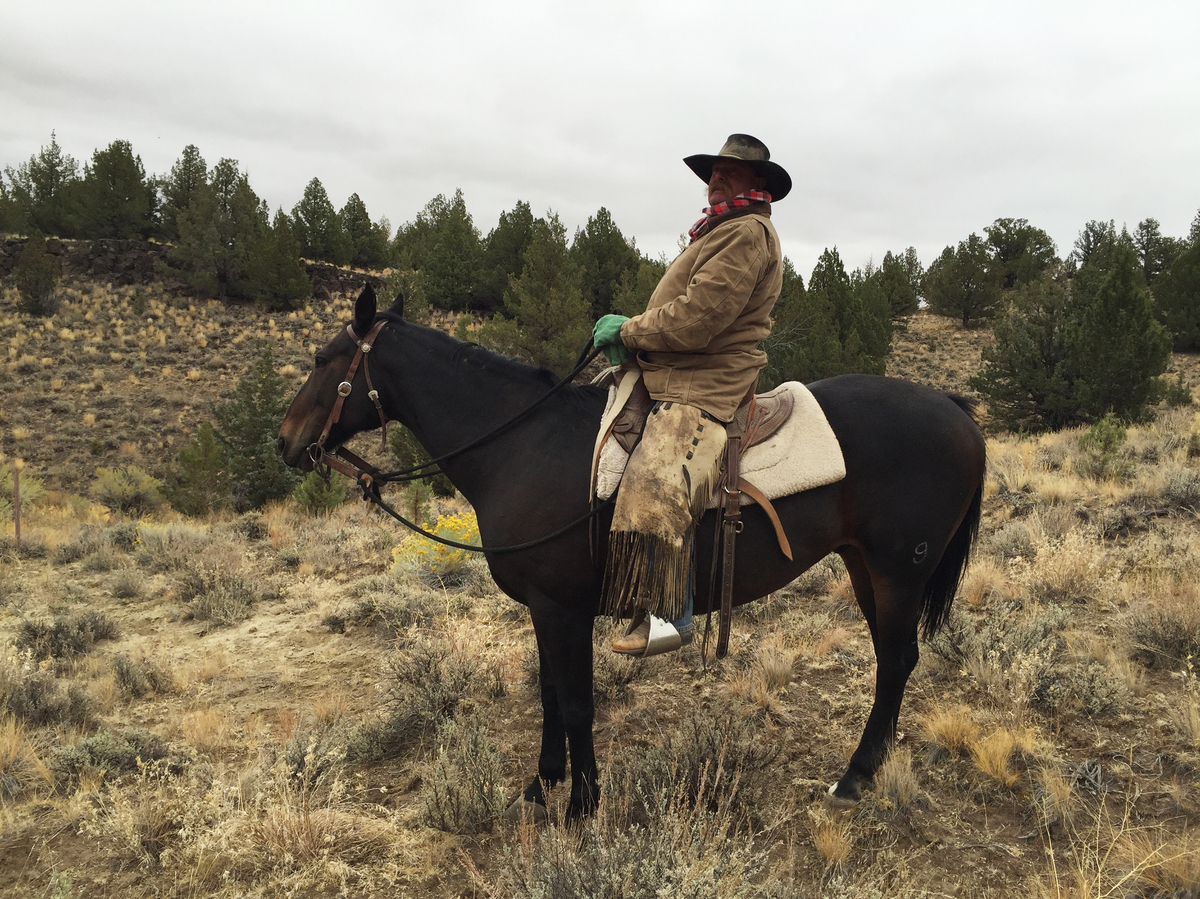 For generations, rancher Gary Miller and his family have held federal grazing permits to run cattle on the Malheur National Wildlife Refuge.

"There's been some good things that have happened in Harney County," Miller says. "Really they should be a role model for the nation on some of the collaborative efforts."

Around the West, many ranchers around have said they resent what happened with the standoff in Oregon. They say it's one thing to storm a wildlife refuge with guns to force an issue and it's another to actually spend long hours and late evenings working through tough issues, going to meetings and volunteering time to work out deals.

Miller says he's not sure where all that collaboration sits now after all the drama.

"There's people that have drawn a side, and they will not do business with someone that's got an opinion on it," Miller says.

Miller is watching the news about the trial as much as he can, and he wants the occupiers to face consequences. But at the same time, he's busy-- he's got cows to take care of and doesn't want news of the occupiers to dominate his life. He's ready to move on, and to keep working on a better way forward for his community.

"We all, in the end, want the same end result," Miller says. "We want a better America, you know, and not ruin where we live.