Accessibility links
How The 'Cannabis Catch-22' Keeps Marijuana Classified As A Harmful Drug Author John Hudak says federal law makes it hard to prove the medicinal value of marijuana. "As a Schedule 1 drug, it is very difficult to do research on the plant," he explains. 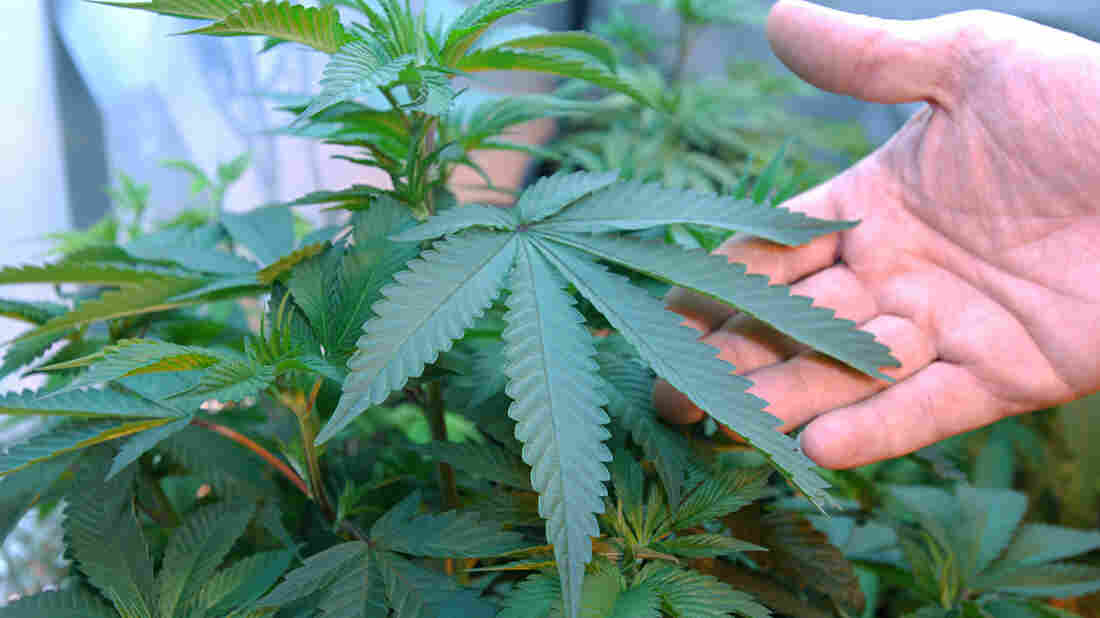 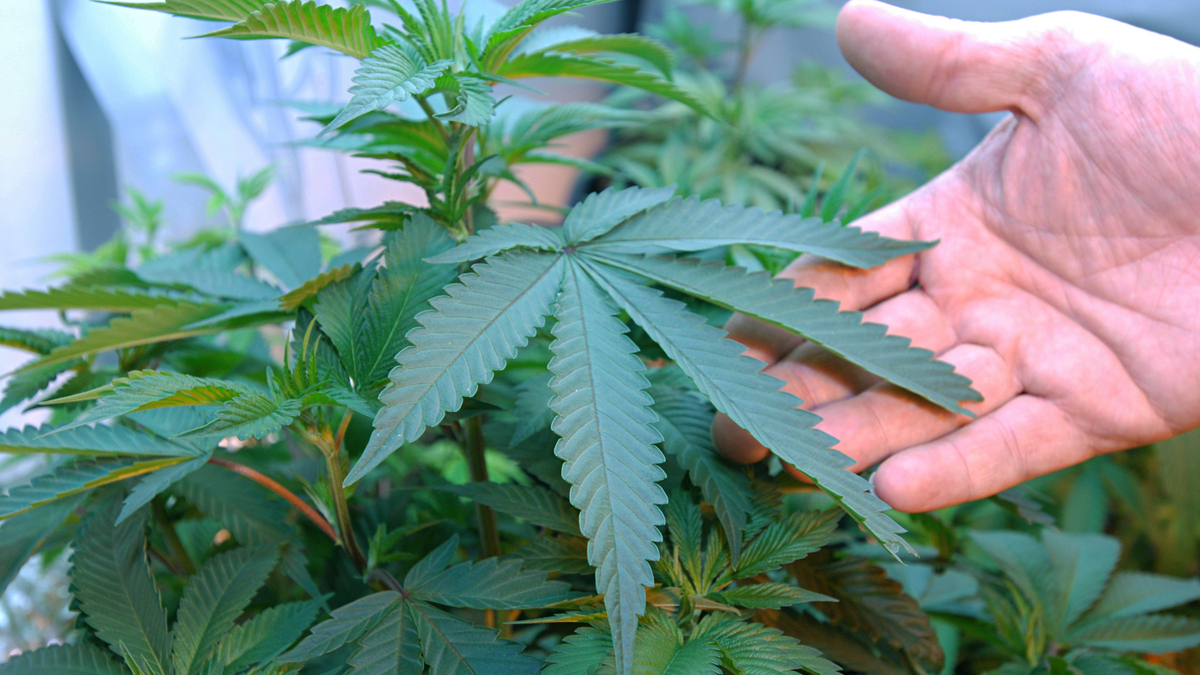 Marijuana grows in the home of two medical marijuana patients in Medford, Ore.

America has a long and storied history with marijuana. Once grown by American colonists to make hemp rope, by 1970, it was classified as a Schedule 1 narcotic. Possession of it was — and is — a federal crime, despite the fact that in recent years 25 states have legalized medical marijuana and four states and the District of Columbia have legalized cannabis for recreational use.

Author John Hudak, a senior fellow at the Brookings Institution, traces the history of America's laws and attitudes toward cannabis in his new book, Marijuana: A Short History. He tells Fresh Air's Dave Davies that the recent shift in public policy is, in part, a recognition of the drug's medicinal value, which became apparent in San Francisco during the AIDS crisis of the 1980s.

"People were saying, 'If I smoke this and I get the munchies, maybe it will help people dying of AIDS who are so nauseated that they can't eat and they're dealing with clinical anorexia as a result of that,' " Hudak explains.

One significant argument in favor of adult use marijuana that not many people talk about is a simple one, and that is some people just like to get high.

The grass-roots movement turned political, and in 1996, California became the first state to pass a medical marijuana ballot initiative. Other states followed, though the impetus for the movement grew beyond the medicinal.

"One significant argument in favor of adult use marijuana that not many people talk about is a simple one, and that is some people just like to get high," Hudak says. "I think in this policy debate, oftentimes seeing marijuana as a recreational product, it is frowned upon to discuss it, but it's a reality. People enjoy it like people enjoy wine or people enjoy a good steak."

On Harry Anslinger, who played a pivotal role in the effort to criminalize marijuana 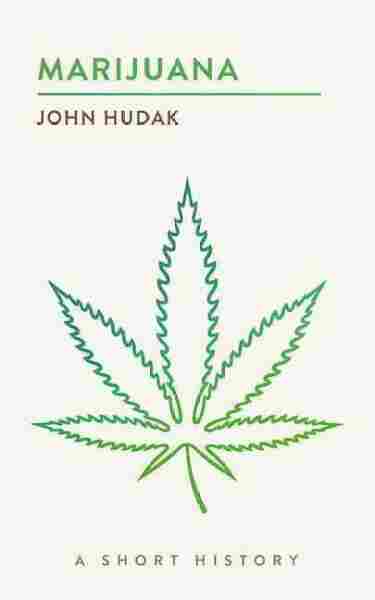 Harry Anslinger was the nation's first real drug czar. He came from the Bureau of Prohibition and was put in charge of a variety of federal government agencies that changed names over the course of time, but were effectively the precursors for the Drug Enforcement [Administration].

He was essentially the J. Edgar Hoover of drugs in the United States. He had the same types of tactics that Hoover had — that was being very aggressive with Congress, going into the media to try to advance his political and policy interests. He had, by all accounts, details and histories of members of Congress and senators that they did not want to become public, and he was a one-man force in expanding drug prohibition in the United States. He did this for a variety of drugs, but he had a special place in his heart for marijuana.

On how marijuana use was made into a racial issue

Anslinger brought to it this real racialized aspect. I mean, he was an absolute avowed racist, and when you look at the letters he wrote to different civic organizations or op-eds that he published, or even congressional testimony, it is riddled with racist language and racist claims about the use of marijuana really being only in Mexican communities in the Southwest, and then eventually it transitioned to be a product that was used by the individuals who were around jazz music, which of course was code language for the African-American community.

And so proceeded this racialized history, and [Anslinger] ... claimed that marijuana would turn people into psychopaths, murderers, rapists — it would make women promiscuous, particularly promiscuous around men of color, and this was seen as something that was brought into communities by people of color in order to make the most vulnerable in society behave in ways that would appall society.

In the 1970s President Nixon commissioned the former governor of Pennsylvania, Ray Shafer, who was a good friend, a fellow Republican, a good friend of Nixon's, to commission this report about this evil drug infecting society, and Shafer came up, again, with the same answers — it wasn't as addicting, that there were reasons to try to think about this drug in different ways than the federal government was thinking about it, that it wasn't causing violent crime.

Shafer was actually called into the Oval Office and read off by the president for this draft report, and [Nixon] said to Shafer, "You cannot publish this." And Shafer stood his ground. He said, "I'm publishing it." And Nixon trashed that.

It was just this extended period of president after president asking for answers, not getting the answers that he liked, and then throwing the report away.

On what led to policy change for use of marijuana

This really began in the Castro District of San Francisco in the late 1980s and early 1990s. The AIDS epidemic was ... ravaging this community, and it was one that individuals, I think, looked at this product that was largely being used recreationally and understood that it helped with pain relief.

So you had a few individuals — Dennis Peron is one; a woman named Brownie Mary who was an orderly at a hospital in San Francisco who would bake brownies laced with marijuana and deliver them to AIDS patients each day. This community popped up around delivering medical cannabis for those who are dying.

And it wasn't only people dying of AIDS, it was people who had a variety of ailments — and that grass-roots, underground, even though it was pretty much in the daylight for some time, movement transitioned into a political one, and in 1996 California became the first state to pass a medical marijuana ballot initiative.

On arguments in favor of legalization

We have 750,000 arrests in a year that have to do with marijuana. And so in communities of color that criminal justice argument is a tremendous one. For libertarians you talk about personal liberty and privacy and property rights, and that is an important issue for them. For conservatives or liberals who are interested in balancing the budget, talking about all of the law enforcement dollars that are spent on the prosecution and investigation of marijuana crimes in a year, that's budget savings, as well as revenue in the door on the tax side.

For others, it is about product safety, understanding that a regulatory system is going to be able to test the product and you'll know exactly as a consumer what you're getting, whereas on the black market you don't know that.

Legalizing Marijuana: It Changes Policing, But May Leave Racial Disparities

There is this cannabis Catch-22 and it is, as a Schedule 1 drug, it is very difficult to do research on the plant. There are only certain researchers who will get the certification and licensure necessary to handle the drug. Then, of course, you need the funding to study it. You need approval from university institutional review boards, and the burdens that exist to do the type of research on a Schedule 1 drug are tremendous. But that research is what will inform the medical community as to its medical use, and so what you need and what you can do are entirely prevented by this federal government policy.