Accessibility links
The Latest Clinton Campaign Emails Released By Wikileaks Are More Embarrassing Than Damaging WikiLeaks is meting out a trove of hacked emails from Clinton campaign chairman John Podesta. The latest release includes commentary on Catholicism and risotto. 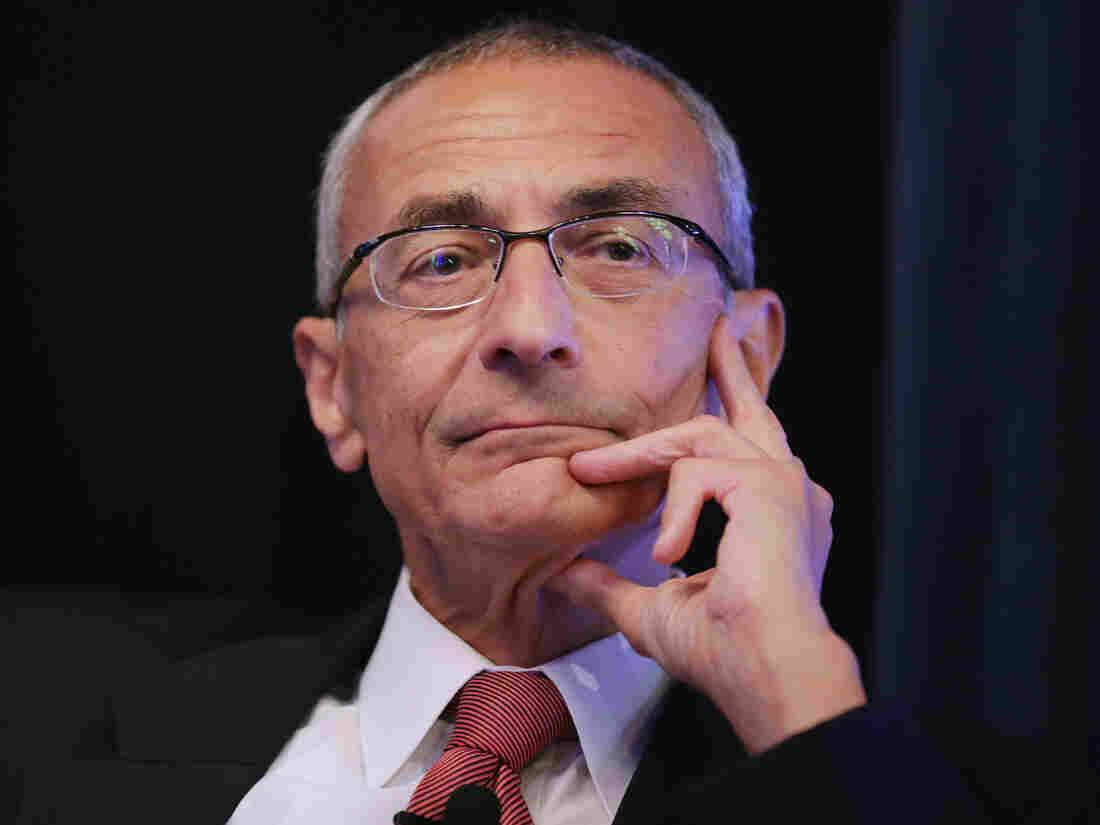 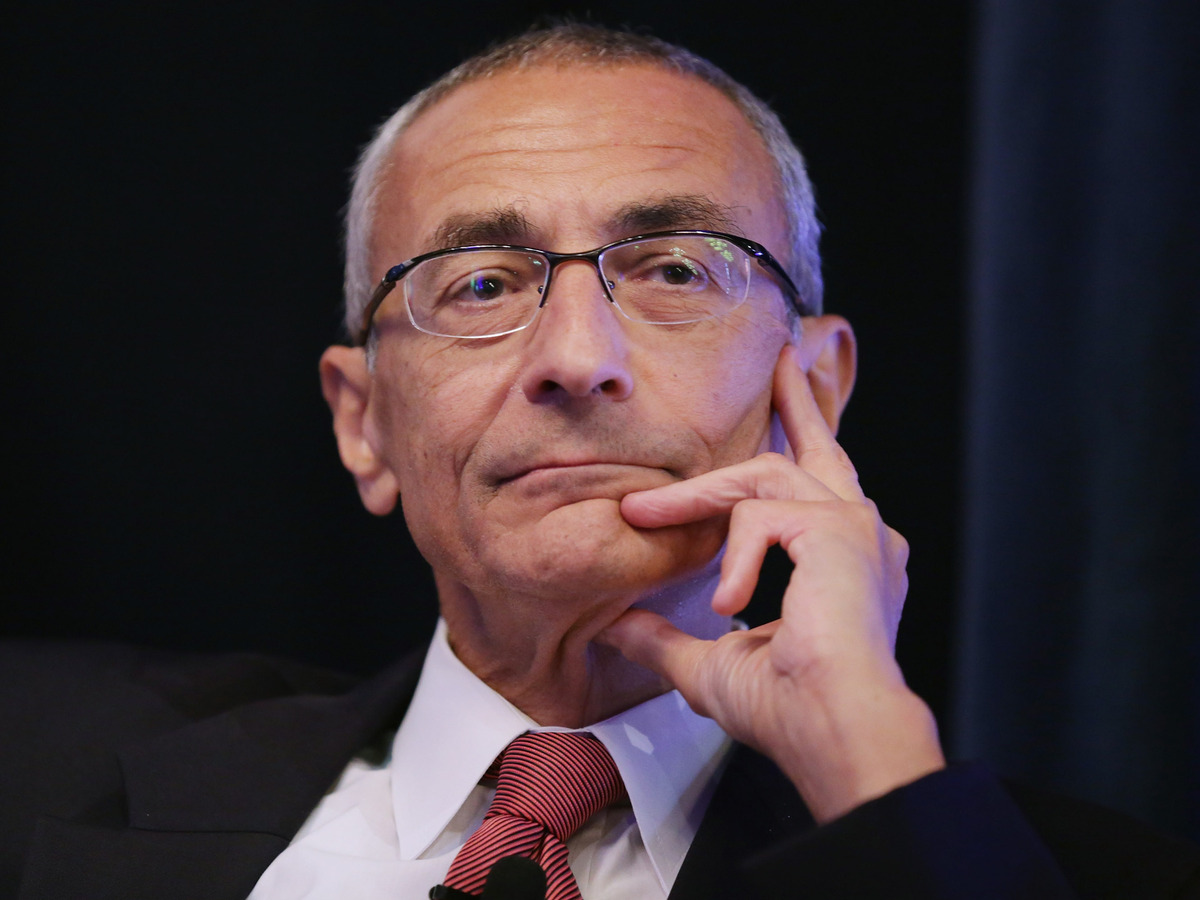 John Podesta was Bill Clinton's White House chief of staff from 1998 to 2001 and is now Hillary Clinton's campaign chairman.

Comic book fans are familiar with the idea of the multiverse: alternate worlds very similar to ours but different enough for plots to come and go without affecting long-term story arcs.

Well, on the Earth-3 where Hillary Clinton is running for president against a traditional, disciplined Republican — and not a Donald Trump, who has declared civil war on other Republican leaders — WikiLeaks' decision to post Clinton campaign chairman John Podesta's private emails would be a major, major news story right now.

Podesta reported Tuesday that the FBI is looking into Russia's role in providing the trove to WikiLeaks, and he said the Trump campaign had foreknowledge of the release. He pointed, circumstantially, to Trump's "deep engagement and ties with Russian interests in his business affairs" and to a tweet Trump adviser Roger Stone sent in late August:

To be fair, the WikiLeaks revelations got enough attention to factor into Sunday's presidential debate. But as Trump has picked fights with House Speaker Paul Ryan and 2008 Republican nominee John McCain, the details emerging from Podesta's emails have been relegated to the news cycle's back burner.

That's good news for Clinton. Because as reporters and political operatives are combing through the thousands of documents, they're finding evidence of several long-running critiques of Clinton and her campaign.

Among the emails we're reading today: evidence suggesting a top Democratic National Committee official fed Clinton an answer to a question to be posed at an upcoming town hall forum; evidence that a Clinton campaign staffer was communicating with people at the Department of Justice about Clinton's much scrutinized emails; and pointed commentary concerning Catholics and evangelical Christians.

The Trump campaign is doing its best to highlight the WikiLeaks documents. Trump has begun speaking about them at length at his campaign rallies, and his communications staff is regularly blasting out updates to reporters.

The Clinton campaign says Russia is intent on disrupting the American election.

Here's what's notable in the most recent collection of Podesta emails:

'Suicidal' To Not Take Press Questions

Podesta and top Clinton aide Huma Abedin are shown in an exchange over a topic that has been sensitive around Hillary Clinton for some time — exposure to reporters' questions.

In May 2015, the early days of the campaign, Abedin expressed concern that allowing reporters to ask questions at campaign events diluted the message of the event. She cites one apparent instance: "Her community banks message got lost because she answered questions about the foundation and emails."

Abedin proposed spending the summer of 2015 rolling out policy proposals and waiting until autumn to introduce press availabilities.

Podesta replied, "If she thinks we can get to Labor Day without taking press questions, I think that's suicidal. We have to find some mechanism to let the steam out of the pressure cooker."

The response from Abedin was that she was "not suggesting no q and a at all," but perhaps Clinton could take questions from voters at events where she was rolling out policy and answer reporter questions at other times, including stops at ice cream shops or house parties.

Hillary Clinton's decision to use a private email server during her time as secretary of state is a central criticism of the Trump campaign. Trump and top surrogates like Rudy Giuliani regularly insist that Clinton should have been prosecuted for mishandling classified information and that the FBI only declined to pursue charges against her for political reasons.

Clinton's press secretary, Brian Fallon, provided fodder for charges of Justice Department-Clinton campaign coziness, writing in May of last year that "DOJ folks inform me there is a status hearing in this case this morning, so we could have a window into the judge's thinking about this proposed production schedule as quickly as today."

He and other Clinton staffers were discussing legal proceedings regarding the release of her State Department emails, which were the focus of an eventual separate investigation. Fallon and his correspondents were talking about public information — the timing of public court hearings and public announcements — but the idea that Fallon, a former Justice Department staffer, was communicating with the department about the politically sensitive topic raises many questions.

"Today we learned, amazingly, that the Department of Justice fed information to the Clinton campaign about the email investigation so that the campaign could be prepared to cover up her crimes," Trump told a Florida rally Monday night.

In fact, the federal investigation into Clinton's email setup did not begin until later that year. Still, the Fallon email is likely to be a repeated talking point from the Trump camp, which has renewed its focus on the email investigation in the campaign's closing weeks.

Recall how much fallout there was earlier this year, when former President Bill Clinton briefly chatted with Attorney General Loretta Lynch, as the FBI investigation was drawing to a close.

Getting Town Hall Questions In Advance

On the eve of this summer's Democratic National Convention, WikiLeaks posted thousands of Democratic National Committee emails. The documents showed that many Democratic staffers were openly rooting for Clinton to prevail over primary opponent Bernie Sanders. DNC Chair Debbie Wasserman Schultz resigned following the leaks. Donna Brazile replaced her on an interim basis.

But a March 2016 email shows that Brazile may have been playing favorites, too. At the time, Brazile worked as a CNN commentator in addition to holding a position at the DNC. In an email with the subject, "From time to time I get the questions in advance," Brazile shared a question about the death penalty ahead of a CNN town hall event. "Here's one that worries me about HRC," she wrote.

"I never had access to questions and would never have shared them with candidates if I did," Brazile said in a statement. But the question she sent to Clinton staffers was very similar to one asked of Clinton the next night.

Like many Democrats, Brazile is highlighting Russia's suspected role in this year's political hacking. "Our Intelligence Community has made it clear that the Russian government is responsible for the cyberattacks aimed at interfering with our election, and that WikiLeaks is part of that effort. This revelation should deeply trouble all Americans in both parties," she wrote.

The Trump campaign focused the bulk of its attention Wednesday on a 2011 exchange among Podesta, Jennifer Palmieri (now Clinton communications director) and Center For American Progress fellow John Halpin that includes condescending comments about religious conviction.

Pointing to a magazine article noting that conservative media titan Rupert Murdoch was raising his children as Catholics, Halpin wrote, "Many of the most powerful elements of the conservative movement are all Catholic (many converts) ...they must be attracted to the systematic thought and [severely] backwards gender relations."

How Best To Eat American Cheese That's Not, Technically, Cheese

How Best To Eat American Cheese That's Not, Technically, Cheese

Palmieri wrote back, "I imagine they think it is the most socially acceptable politically conservative religion. Their rich friends wouldn't understand if they became evangelicals."

Trump's campaign manager, Kellyanne Conway, organized a conference call Wednesday afternoon and demanded that Clinton apologize for the remarks, which she said are "seething with disdain for us and our core beliefs." (Conway is Catholic.)

She continued, "The hostility toward religious liberty and to beliefs that we hold as Catholics should not go unnoticed or unpunished."

Asked about the email on Wednesday, Palmieri told reporters "I'm a Catholic" and said she did not recognize the email in question.

Of course, Trump has had his own problems with Catholics — most notably a high-profile fight he picked with Pope Francis last year in which he called Francis "disgraceful." Conway and other Trump surrogates on the call ducked a question about whether, after that, Trump has the ability to criticize others for insulting Catholics.

And on the issue of religious liberty as a whole, it was Trump — not Clinton — who called for a temporary ban on all Muslims entering the United States.

Most of the emails are banal: mass mailings, newsletters and the like.

One email making the rounds from this most recent release focuses on some helpful cooking tips from Podesta, who is known in Washington as an accomplished cook.

Responding to a note about why risotto recipes call for slowly adding stock to the rice rather than all at once, Podesta dropped this culinary knowledge:

"The slower add process and stirring causes the rice to give up its starch which gives the risotto its creamy consistency. You won't get that if you dump all that liquid at once."

Patience plays a big part in getting that risotto just right.

An earlier version of this story mischaracterized the subject of Brian Fallon's email regarding the Department of Justice. It was about legal proceedings focused on the release of Hillary Clinton's State Department emails, not the Justice Department's separate investigation of her private server. Additionally, Donna Brazile's last name was misspelled as Bazile in some references.