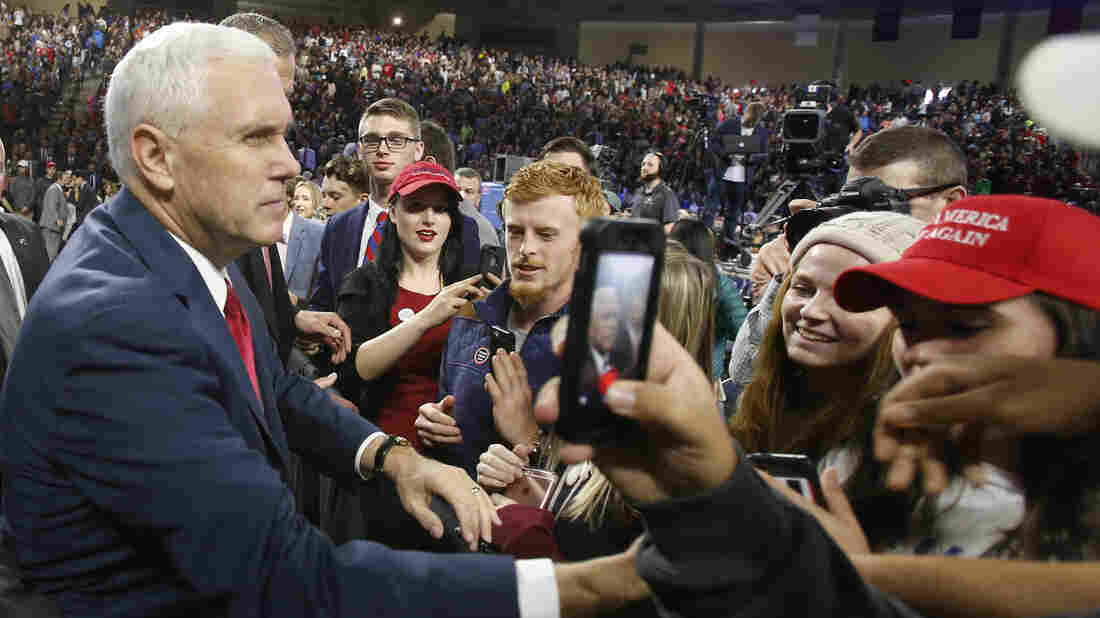 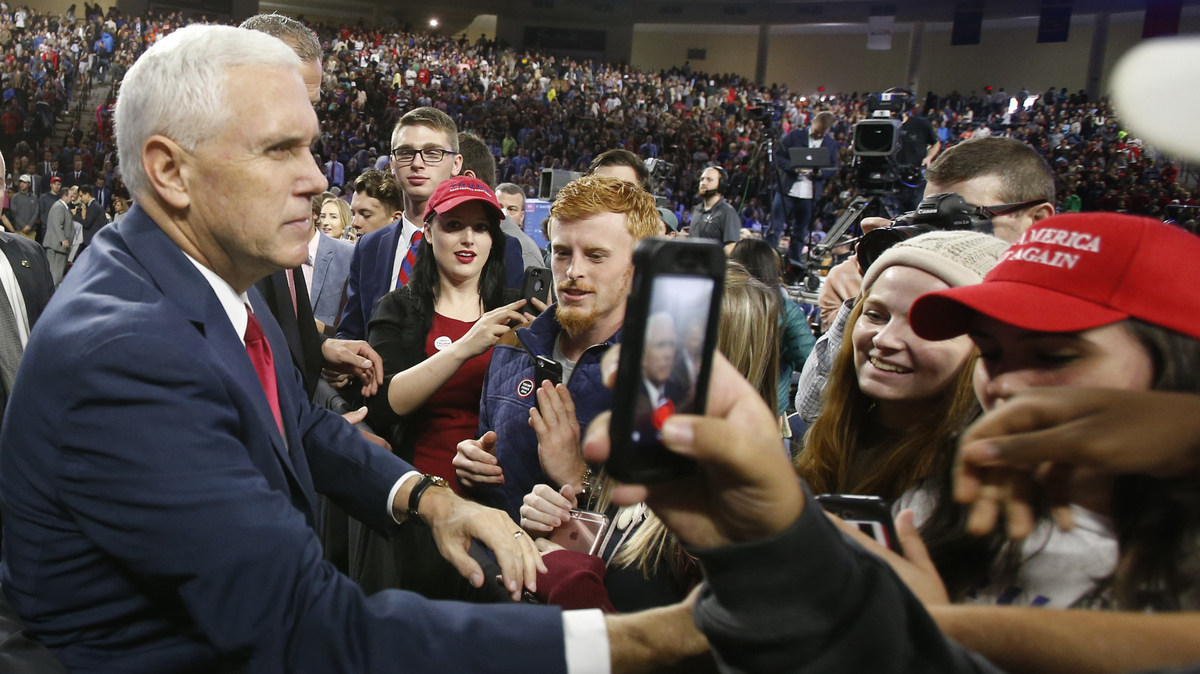 Republican vice presidential nominee Mike Pence, left, shakes the hands of supporters after a speech at Liberty University in Lynchburg, Va., on Oct. 12.

Liberty University is a place where Donald Trump still has a lot of support.

But his running mate, Indiana Gov. Mike Pence, is the one who seems naturally at home at the Virginia college, in a way the flamboyant New York real estate developer is not.

Pence spent Wednesday morning campaigning at the school. In his speech, he alluded to Scripture about sin and redemption as he talked about the scandal surrounding his running mate — the release of a tape where Trump can be heard explicitly boasting about groping women.

"We're called to aspire to live godly lives, but also we recognize that we all fall short," Pence told the audience.

'We Are Better Than That': Clinton Sees An Opening In Voters Turned Off By Trump

It was in stark contrast to Trump's appearance there earlier this year, when he famously flubbed the pronunciation of a book of the Bible — calling it "two Corinthians" instead of "Second Corinthians."

Pence is a longtime evangelical, well-versed in the language and theology of this crowd. He argued that Trump has apologized and said it's time to extend to him the Christian virtue of forgiveness.

"It's not about condoning what is said and done; it's about believing in Grace and forgiveness," Pence said. "As Christians, we are called to forgive, even as we've been forgiven."

Liberty University President Jerry Falwell, Jr., is standing by Trump, but many evangelicals are struggling with that decision.

From what I've heard he knows Jesus now, so I'll offer him the same grace God gave him to forgive him for that.

But for Jonathan Ludwig, a freshman at Liberty University from New Jersey, Pence's call for forgiveness rang true, even though he finds Trump's words about women "disgusting."

"I think that's inappropriate on all levels and it's inexcusable. But I do know this — that we all sin. We all fall short of the glory of God and we need Jesus and that's just the truth," Ludwig said. "He made those comments 11 years ago and from what I've heard he knows Jesus now, so I'll offer him the same grace God gave him to forgive him for that."

For his friend Christopher Horton, a freshman from Miami, Trump's character and language have been making him rethink his political loyalties. 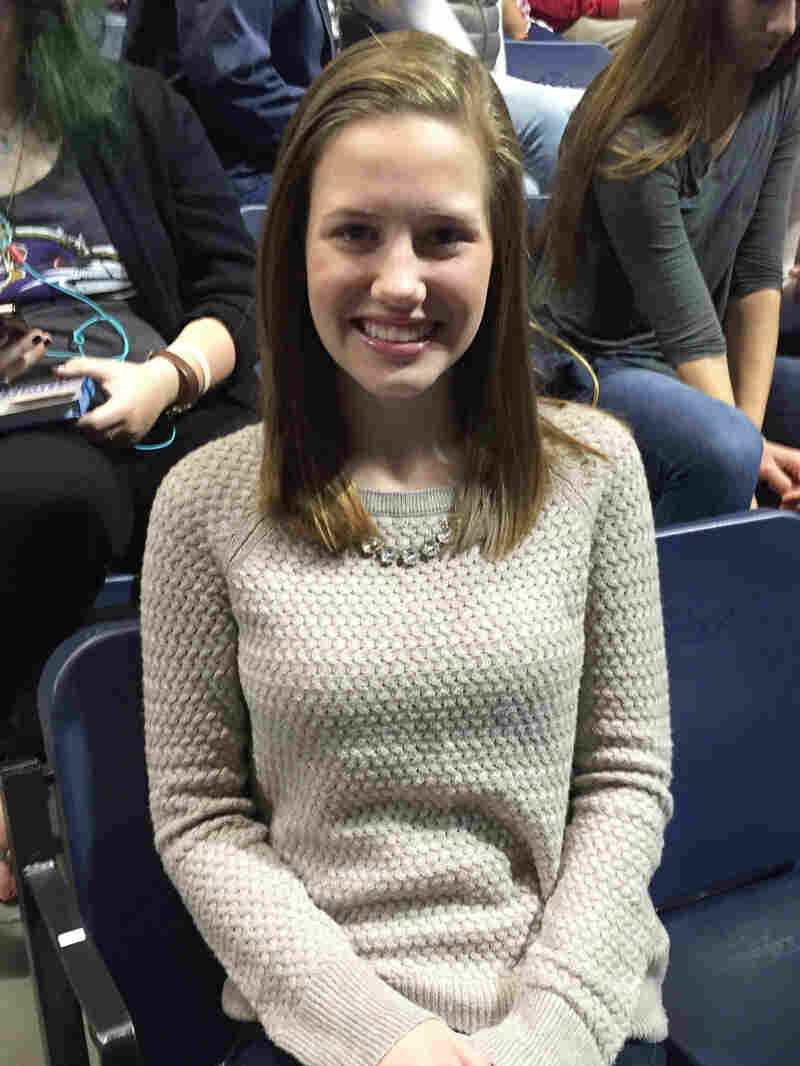 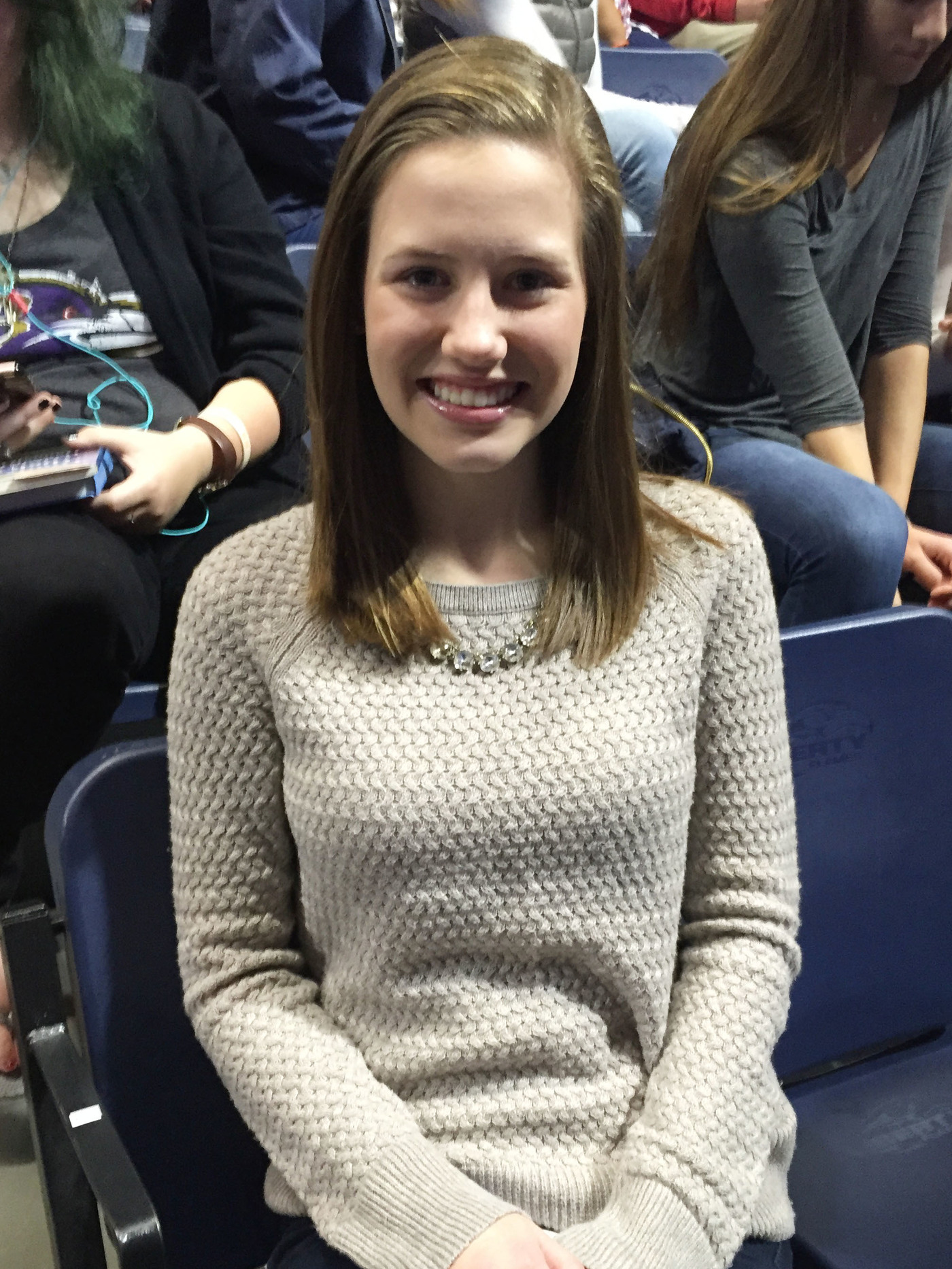 Bayley Sharp, of Roanoke, Va., poses for a photo at Liberty University in Lynchburg, Va., on Oct. 12.

"I have had Republican views since growing up and just recently, I struggle with Donald Trump's comments about women," Horton said. "I don't think he's very professional, and I find it hard to vote for him and have him represent our great nation."

Horton says he believes Clinton is corrupt — as Trump often argues — but he's leaning toward voting for her anyway.

Bayley Sharp, a freshman from Roanoke, Va., said she heard the 2005 tape of Trump and wasn't pleased.

"My dad taught me that men should respect women, and the way he was talking about women wasn't respectable," Sharp said. "That shouldn't be what our president should look like."

But Sharp says she loves Mike Pence and feels better with him on the ticket. She says her opposition to abortion is her top priority in choosing a presidential candidate and Sharp sees Trump as the better of two bad choices. So, she's accepting his apology.

"Right now, I feel like he has apologized for that and he wants to move on from that," Sharp said, "And hopefully he will."

While abortion may motivate many conservative evangelicals to stick with Trump, it could be harder to persuade moderate voters to forgive and forget --especially with dozens of leaders of Trump's own party calling for him to step aside.