Accessibility links
In Indiana's Senate Race, Political Royalty Tries To Put On A Fresh Face Former Democratic Sen. Evan Bayh's double-digit lead in a Senate race has shrunk after weathering criticism for making a home in Washington, D.C., instead of Indiana during his years after the Senate. 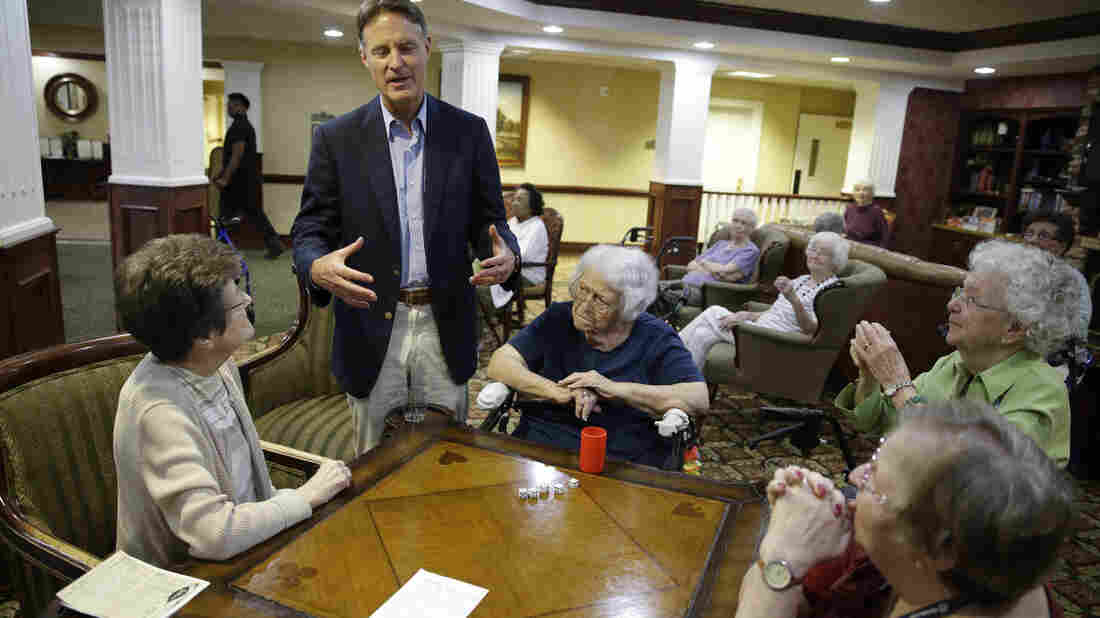 Senate candidate Evan Byah talks with seniors at a living community in Indianapolis. Voters who support both Donald Trump and Bayh in red Indiana have to, at some level, hold two conflicting ideas simultaneously -- a desire for change and an appreciation for a politician's past record. Michael Conroy/AP hide caption 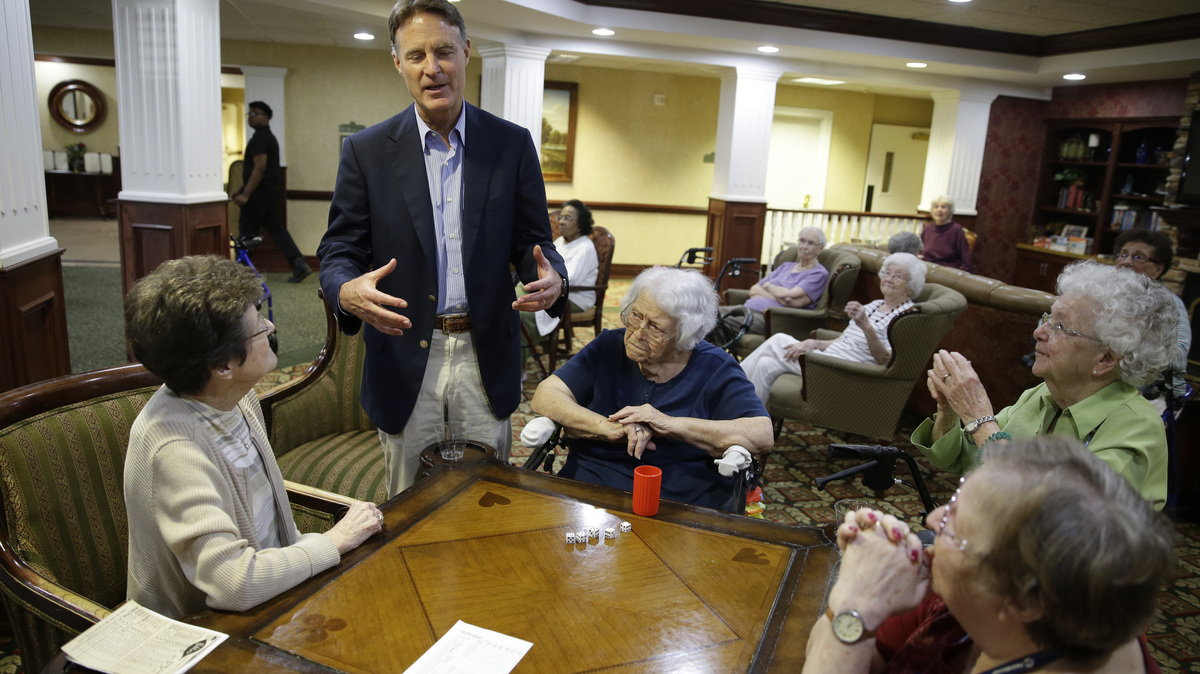 Senate candidate Evan Byah talks with seniors at a living community in Indianapolis. Voters who support both Donald Trump and Bayh in red Indiana have to, at some level, hold two conflicting ideas simultaneously -- a desire for change and an appreciation for a politician's past record.

There has been a lot of talk about how the explosive 2005 video of Donald Trump making vulgar comments about women may drag down Republican Senate candidates. But so far, it's not a game changer in Indiana. Trump is still favored to win the reliably red state, so that means both contenders for the open Senate seat are fighting over Trump supporters. That's an awkward spot for former Sen. Evan Bayh, a Democrat, who has been panned as a Washington insider during this outsider election year.

When Democrats recruited Bayh to jump into the Indiana Senate race in July, they thought it would be an easy win. But in three months, Bayh's commanding double-digit lead has shriveled to a virtual tie against Republican Rep. Todd Young. That's in large part because of the barrage of criticism Bayh is weathering for making a home — and making lots of money — in Washington, D.C., since leaving the Senate.

A hometown boy who hasn't been home

When the main political attack against you is that you left Indiana for Washington, there are certain mistakes you don't want to make — like getting your Indiana home address wrong. Bayh misstated the address of his Indianapolis condo on local TV news about a month into his contest.

It didn't end there. NPR talked to almost a dozen of Bayh's condo neighbors, including some who live right across the street from him, and almost all of them said they've never seen him around.

"I have heard that he lives in this area. In fact, I went to one of the condo association meetings and they did mention that, yes, he does have a unit in here," said Peggy Kantor, who lives right around the corner from Bayh's condo. She's a part-time knitting instructor, and she said she's around a lot.

He's just not one of us, I don't think. I think he lost touch with the people of Indiana.

Bayh's critics say he hasn't been spotted frequently at the condo the past five years because he has lived a world away from Indiana. After leaving the Senate in 2011, he joined an international law and lobbying firm in Washington called McGuireWoods, and a private equity firm, and multiple corporate boards. He has a home worth $2.5 million in D.C.

It's the kind of profile that gets many Indiana voters riled up. Like Melvin Meyer, who's still running a family woodworking business in Dubois, Ind., at age 79.

"He's just not one of us, I don't think. I think he lost touch with the people of Indiana," said Meyer, a Republican who used to really like Bayh until the last five years. "He left Indiana and went for that, that's my opinion."

Selling both change and nostalgia

Now Bayh is doing an awkward dance. He's running in an election year where the appearance of authenticity is paramount. And he's getting hammered as a Washington insider. But Bayh — the two-term senator and two-term governor — is now saying he's actually the outsider. He must do this because Bayh's path to victory requires winning over Trump supporters.

"If you agree with some of the Trump supporters, we need a change, well, then that's what I want to do — bring a better kind of leadership to Washington," said Bayh at a recent Democratic fundraiser in Kokomo, Ind.

But calling himself the fresh face is a strange move for Bayh, because his family has been political royalty in Indiana for more than a half century.

The best predictor of future behavior is always past behavior, and the legacy of the Bayh administrations – both of them – has been pro-people, pro-Indiana.

Buildings and roads bear the Bayh name in Indiana. Take Bayh Road in Terre Haute, which slices through vast acres of corn and soybean fields. Bayh grew up in this area, and it's where his father, Birch Bayh, is a near mythic figure. The elder Bayh spent three terms in the Senate, only to see his eldest son follow in his footsteps.

"Birch Bayh and Evan Bayh were homegrown names," said Beth Monroe, who lives in one of the small houses at the end of Bayh Road. "I mean, that was discussed around the dinner table around these farming communities. And they never seemed untouchable or inaccessible."

To Monroe, Evan Bayh doesn't represent change — which is fine with her, she's not a Trump supporter. Her affection for Bayh is rooted in the past. She's proud of his bipartisanship and his educational policies — especially a popular college scholarship program he started as governor.

"It's the Bayh legacy," said Monroe. "The best predictor of future behavior is always past behavior, and the legacy of the Bayh administrations — both of them — has been pro-people, pro-Indiana. Very positive."

And this is a conundrum for Bayh — he can't lose the nostalgic voters, like Monroe, but he also has to make the case to voters who want something completely new.

Who is the Trump/Bayh voter?

A voter who supports both Donald Trump and Evan Bayh has to at some level hold two conflicting ideas simultaneously — a desire for change and an appreciation for the past record of longtime politician.

The Top 10 Senate Seats Most Likely To Flip This Election

Davis recently stopped by the Kokomo Cone Palace, an ice cream and burger shop in the auto town. And he explained how he could find a way to support Trump and Bayh at the same time.

"You know, I think you reconcile it by not connecting. And just thinking independently about each candidate," said Davis.

Davis has been a solid Trump supporter, though when I spoke to him he said his confidence in Trump had been shaken by the video of Trump talking about how he has treated women.

But Davis has always been settled on Bayh.

"Bayh does a great job of making people think he's a Republican," Davis said, laughing. "I don't know if that's intentional or not, but yeah, I bet you would have a lot of confusion if you asked what party he belonged to."

So is Bayh Republican or Democrat? An outsider or an insider? Old or new? Take your pick, Indiana.