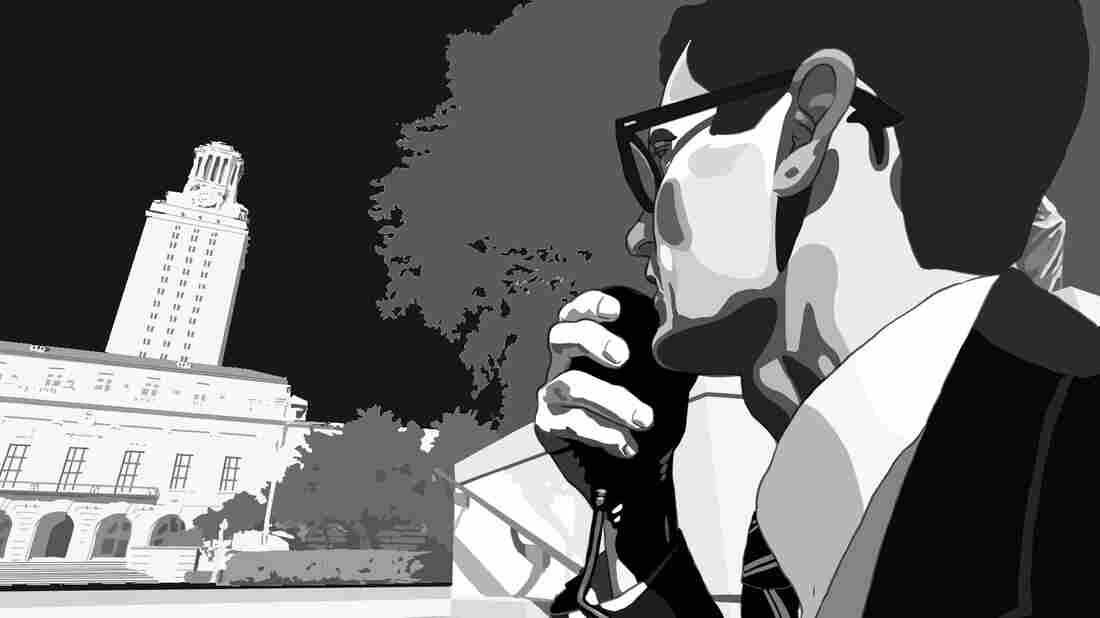 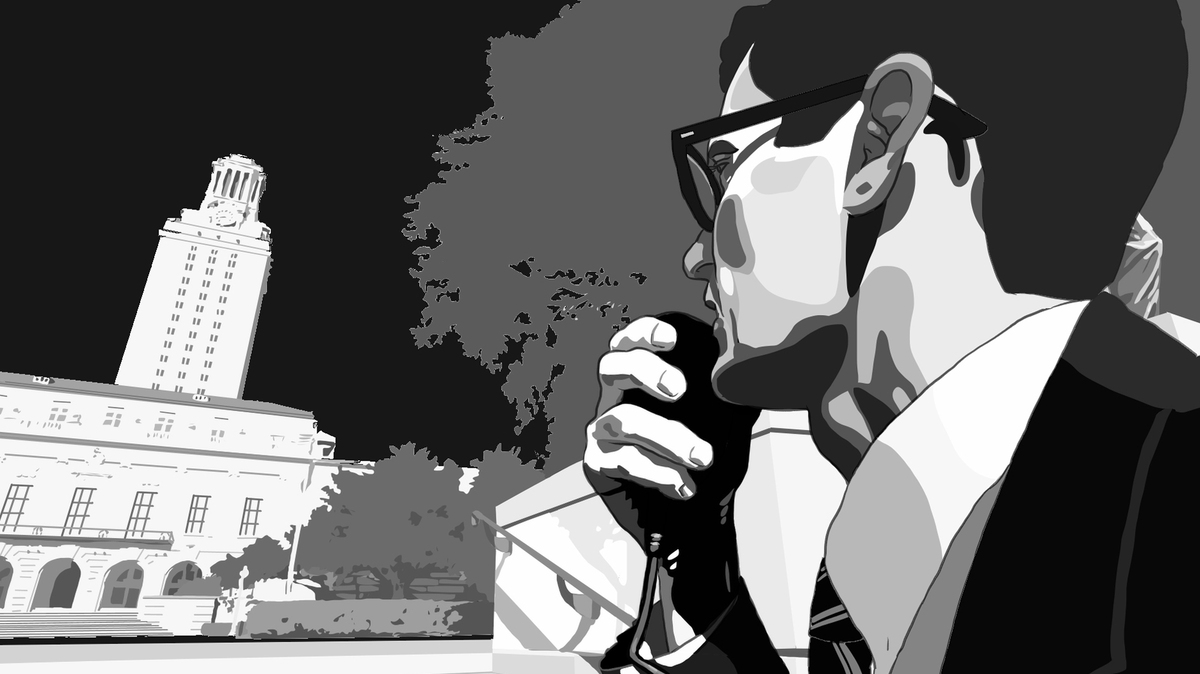 Tower director Keith Maitland filmed real actors, then he laid animation over them.

Tower is an animated documentary that tells the story of a massacre that happened 50 years ago and was a historic first: A man with no record of violence shot at people at random for no logical reason.

It was Aug. 1, 1966, in the middle of a 100-degree day at the University of Texas at Austin. The shots came from the clock tower at the center of the campus. A woman eight months pregnant was the first to fall, soon to be followed by her boyfriend and a boy delivering newspapers on his bicycle. It's not the usual subject for a cartoon.

The animation is rotoscoped, meaning laid over real actors who went through the paces. Those actors also narrate, their words taken directly from transcripts or interviews with the real people conducted by the director, Keith Maitland.

Sometimes Maitland cuts to actual footage from that day. Sometimes he puts animated figures in the foreground against grainy, black-and-white news coverage.

The effect is extraordinary. Rather than distancing us, the animation brings us closer, as news footage or talking heads alone never could. It puts what's happening in the present tense. The rifle cracks seem to slice through you — and Maitland cuts to negative images, strobe-like, as the victims fall to the ground.

The sheer beauty of the animation also makes Tower surreal and drenched in emotion. The soundscape is layered, a collage of traffic noise, real radio and TV broadcasts, and the sound of Top 40 hits like "(What a Day For a) Daydream" over tinny AM radios.

At no point do we see the shooter or hear his name — well, it's uttered once, at the end, by Walter Cronkite in a broadcast. What's hard for us to imagine is that the people on the University of Texas campus that day had no context for this event, nothing to compare it to.

The event is decentralized, seen from multiple incomplete perspectives: people who were shot; policemen and civilians who risked their lives to climb the tower; and even a woman who said she knew while she was watching there was a "moment that separate[d] the brave people from the scared people. I realized," she says, "that I was a coward."

The most wrenching figure is the pregnant woman, Claire, who lies on the plaza, the concrete, she tells us, in her narration, burning the backs of her thighs, her blood leaking out. People watch helplessly, afraid at first to enter the plaza to help.

The word you sometimes hear about films like Tower from documentary purists is "over-aestheticized," which means they think it's false to the reality, manipulative. Director Keith Maitland sometimes does go too far: I could have done without the psychedelic love montage when Claire speaks of her dead boyfriend, even though it's true to her feelings. But I love when nonfiction filmmakers stretch the form, giving us animated docs as powerful as Waltz with Bashir, Persepolis and, now, Tower.

We're on such intimate terms with Maitland's subjects that when the faces of the real, aged people burn in over their younger animated counterparts, the effect is unspeakably moving. This was well before we understood such things as post-traumatic stress disorder, and many survivors have never wanted to talk about what happened. Some are baring their feelings only now, for this film.

I was on the documentary jury that gave Tower its top prize at this year's South by Southwest Film Festival in Austin. When it premiered, there was a section in the film about other gun massacres and a pointed digression about the need for gun control. That's largely gone now, trimmed down to brief images of Columbine and Aurora and other sites of carnage.

A List Of The Deadliest Mass Shootings In Modern U.S. History

Ironically, some people might even see Tower in its present form as an example of what happens when not enough people are armed. Maybe we'll know who's right soon enough. On the 50th anniversary of the Austin shooting — Aug. 1, 2016 — it became legal for students at the University of Texas to carry guns.