Accessibility links
6 Things You Need To Know About Cycling On The Sidewalk People can be found riding bicycles on sidewalks around the country. But should sidewalks double as bike lanes? 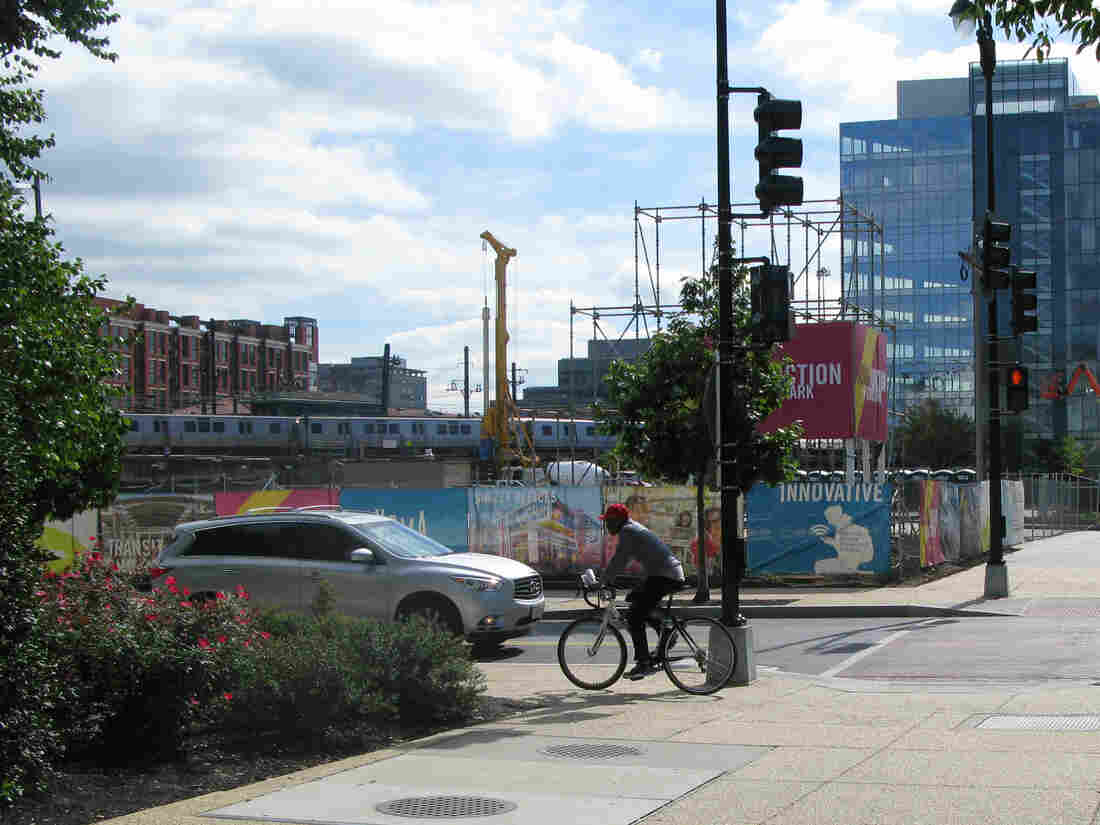 A cyclist rides on the sidewalk in the NoMa neighborhood of Washington, D.C. Parth Shah/NPR hide caption 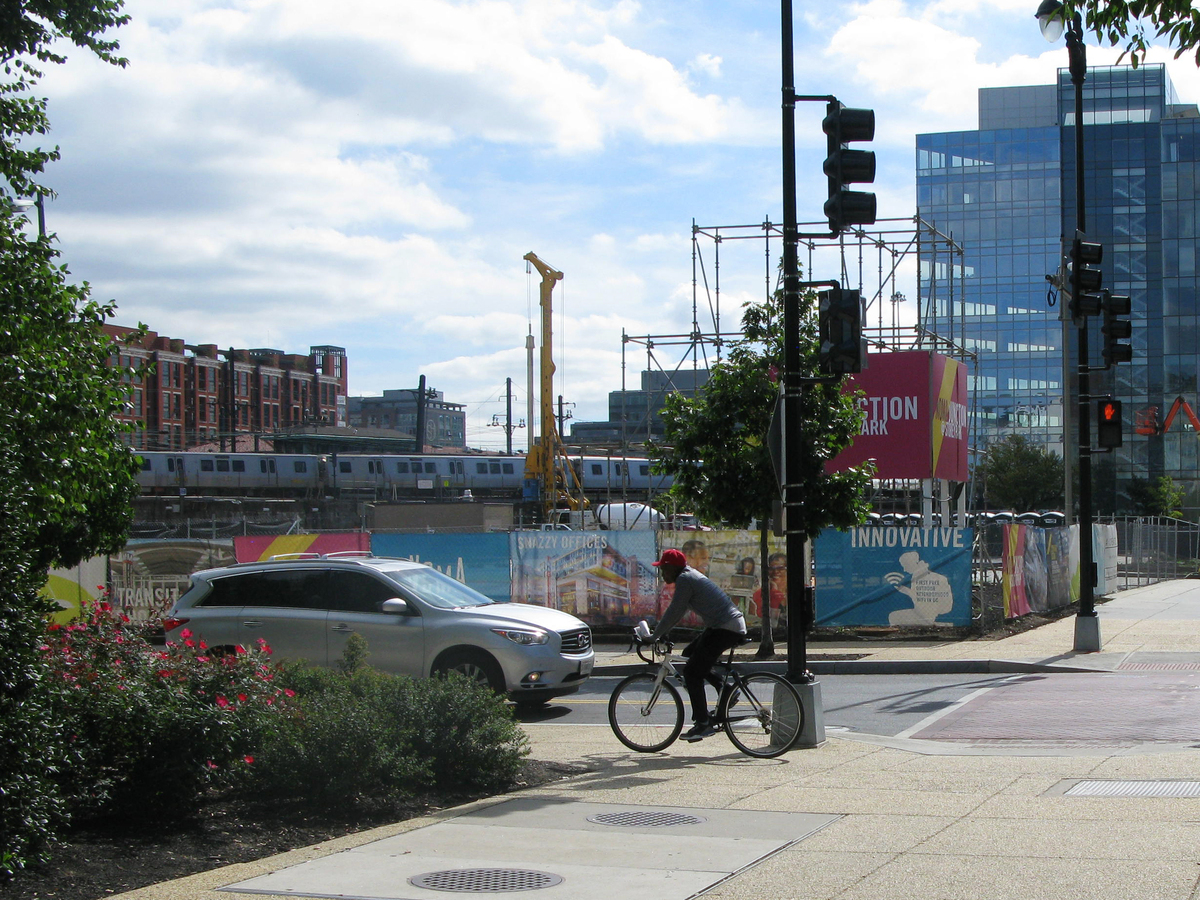 A cyclist rides on the sidewalk in the NoMa neighborhood of Washington, D.C.

Bicycles are a type of vehicle so they belong on the road, right?

This is how the wheels turn in places such as New York City and San Francisco, where bicyclists older than age 13 are banned from riding on the sidewalk. Similar laws exist in many cities and towns throughout the country, such as Columbus, Ohio, and Chapel Hill, N.C.

That's not the case everywhere, though. In Boston and Washington, D.C., sidewalk cycling is allowed — with the exception of the downtown areas. But just because bicyclists are allowed to ride on the sidewalk doesn't mean they are welcome there.

So before you don your helmet (safety first!) and hop on your two-wheeler, here are a few things you need to know about sidewalk cycling:

"It's like a car on the sidewalk," says Lukia Eccleston, a young mom who lives in D.C. and gets around mostly by foot.

"The sidewalk is made for walking and you have them [bicyclists] coming from behind you, almost hitting you."

Bicyclist Sarah Dale says pedestrians make their frustration about sidewalk cyclists clear. But still, she rides on the sidewalk when cars are driving too fast for her comfort.

"You definitely get raised fists from people who are walking on the sidewalk while you're biking," Dale says.

2. Everything is not as it seems

Sidewalks look like the safer option for bicyclists, especially when there are a lot of cars on the road. According to the National Highway and Traffic Safety Administration, 29 percent of bicyclist injuries are the result of car collisions.

But riding on a sidewalk doesn't remove the threat of crashing into a car. Rather, sidewalks make bicyclists invisible to motorists who don't expect to see them at driveways and crosswalks.

Timothy Donelson, a 62-year-old lifelong D.C. resident, learned this lesson the hard way when he was sidewalk cycling in 2014.

"I was coming down, about to go into the street from the sidewalk. I went through the crosswalk and this car — I didn't even see him coming — he came out of nowhere," Donelson says. The car hit Donelson and he ended up in the hospital with back injuries. 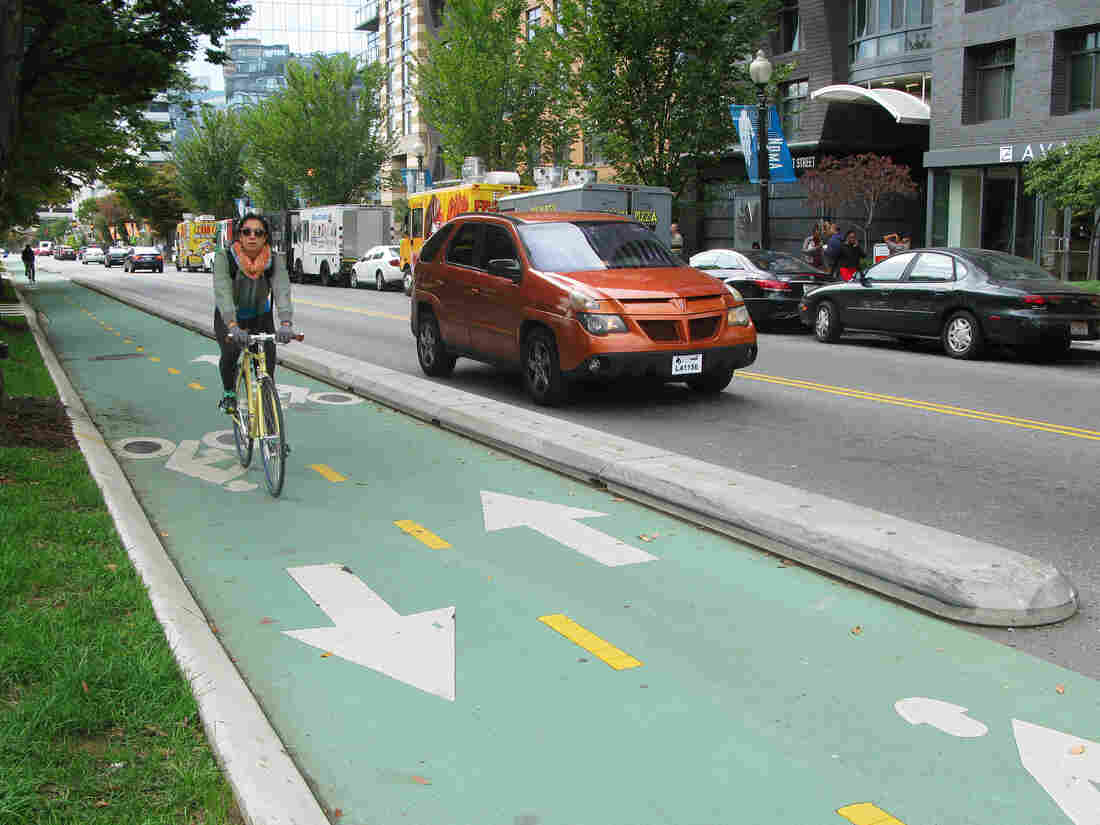 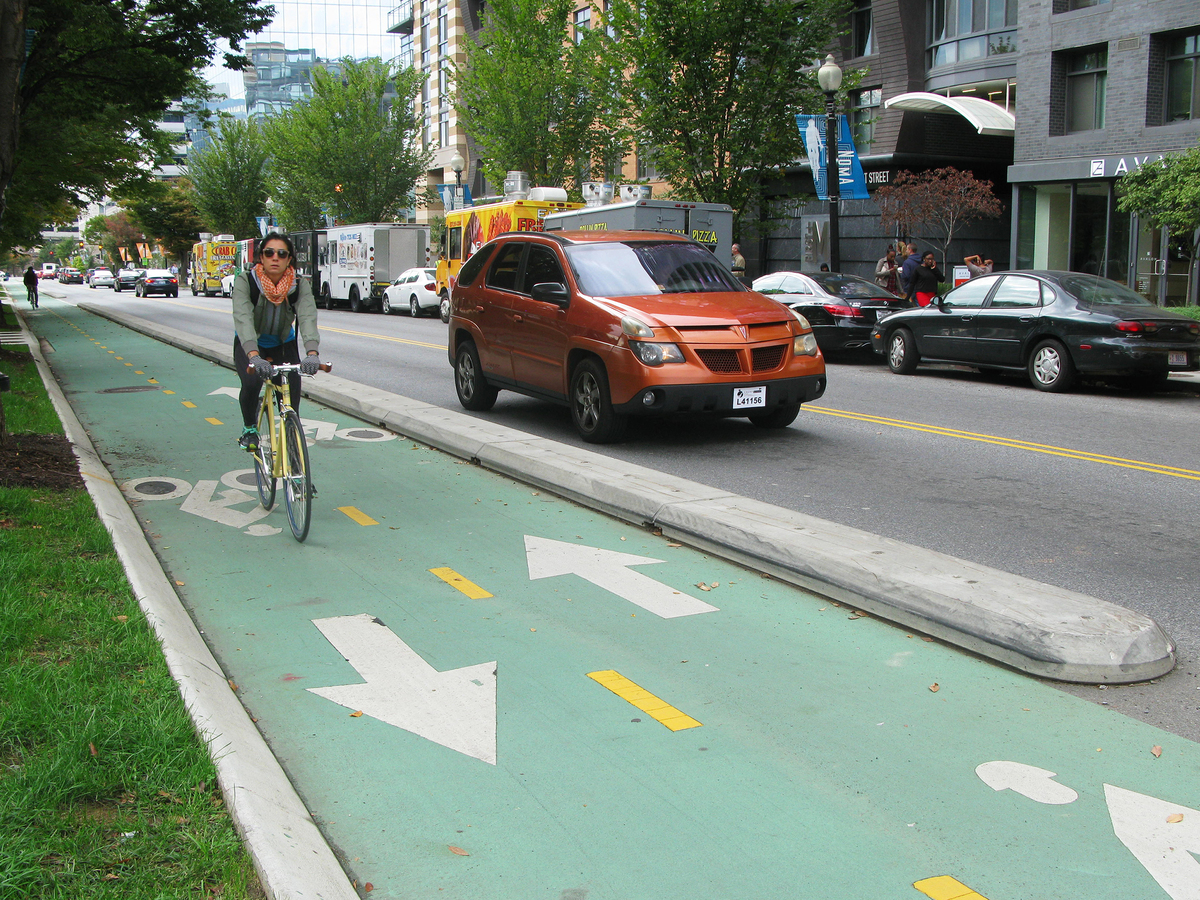 In the past decade, bike infrastructure in cities around the country has expanded significantly. One of the biggest areas of growth is in the number of bike lanes. In D.C. for example, there are now 78 miles of bike lanes; up from three miles in 2001.

But of those 78 miles, only six are protected.

But cost isn't the only consideration.

"We just don't have room to do them in every street," says Jim Sebastian, transportation planner at DDOT.

In traffic-heavy cities, protected bike lanes come at the expense of parking spaces. Roads need to be completely reformatted in order to make enough room for the protected lane.

Though D.C. has struggled to invest in protected bike lanes, other places in the country are doubling down on building more of these lanes. According to PeopleForBikes, a bicycling advocacy group, the number of protected bike lanes nationwide has doubled since 2011. 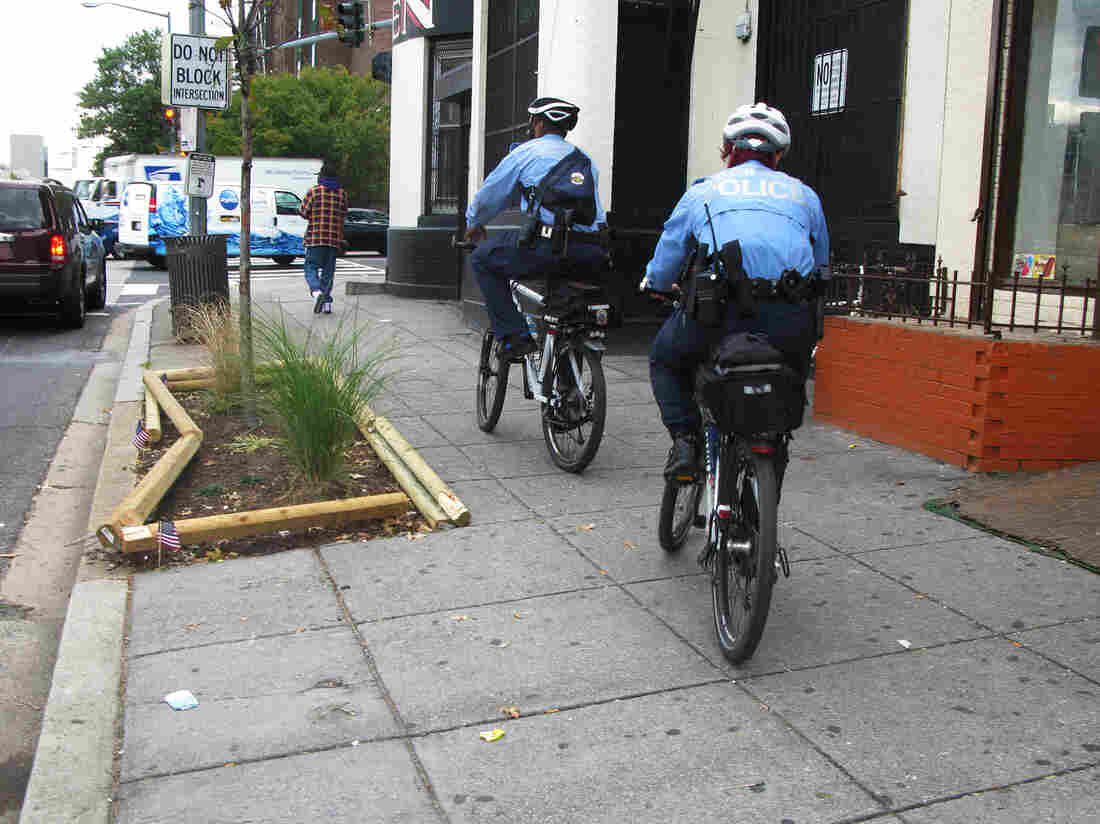 Police officers ride their bicycles in Washington, D.C. Sidewalk cycling is legal almost everywhere in the city, with the exception of the central business district. Parth Shah/NPR hide caption 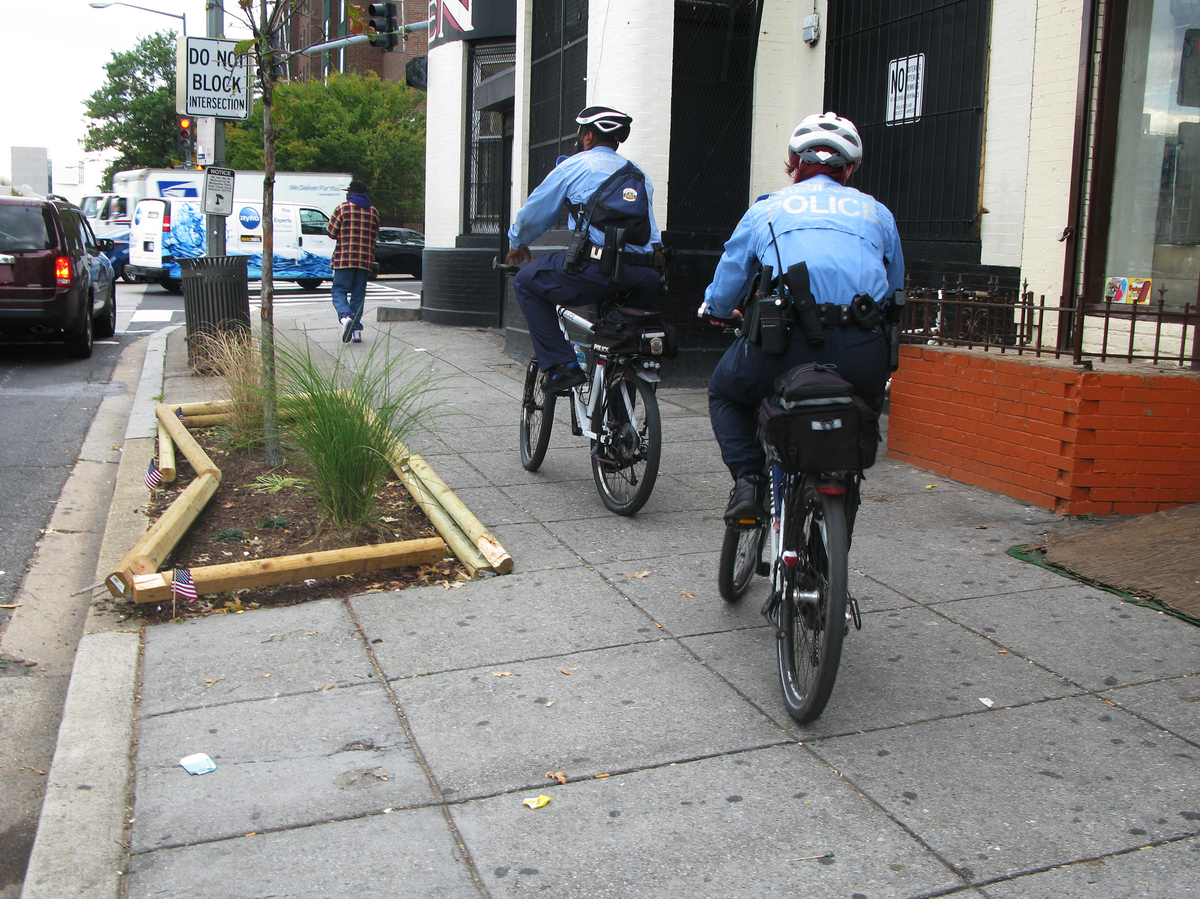 Police officers ride their bicycles in Washington, D.C. Sidewalk cycling is legal almost everywhere in the city, with the exception of the central business district.

"Bike lanes need to be built in a way that takes the road into context," says Colin Browne, a member of the Washington Area Bicyclist Association. While protected bike lanes are proven to reduce sidewalk ridership and get more people on bicycles, they aren't needed everywhere.

"If cars aren't moving fast and there's lots of people, a bike lane that's just paint is OK," he said.

Bicycling advocates like Browne say the answer is for cities to create a network of conventional and protected bike lanes along with bike trails.

Nelle Pierson is also a member of the Washington Area Bicyclist Association. When she rides on the sidewalk, she tries to overcompensate with kindness.

Local department of transportation officials encourage bicyclists to ride slow and yield to pedestrians when they take the sidewalk. While some pedestrians would rather have no bicyclists on the sidewalk, polite or not, they'll have to get used to sharing the space in places where bike lanes are scarce.

"Nobody wants anybody to be riding on the sidewalk," Browne says. "It's a sensible decision to say it's better to ride on the sidewalk for a couple of blocks, than it is to say if you can't take a lane don't bike."