Accessibility links
Comparing The Donald Trump And Hillary Clinton Foundations They're both foundations, and they've both become political liabilities for the major presidential candidates. But beyond that, the Clinton and Trump foundations have remarkably little in common.

Listen · 6:01 6:01
There's Really No Comparison Between The Trump And Clinton Foundations 6:01 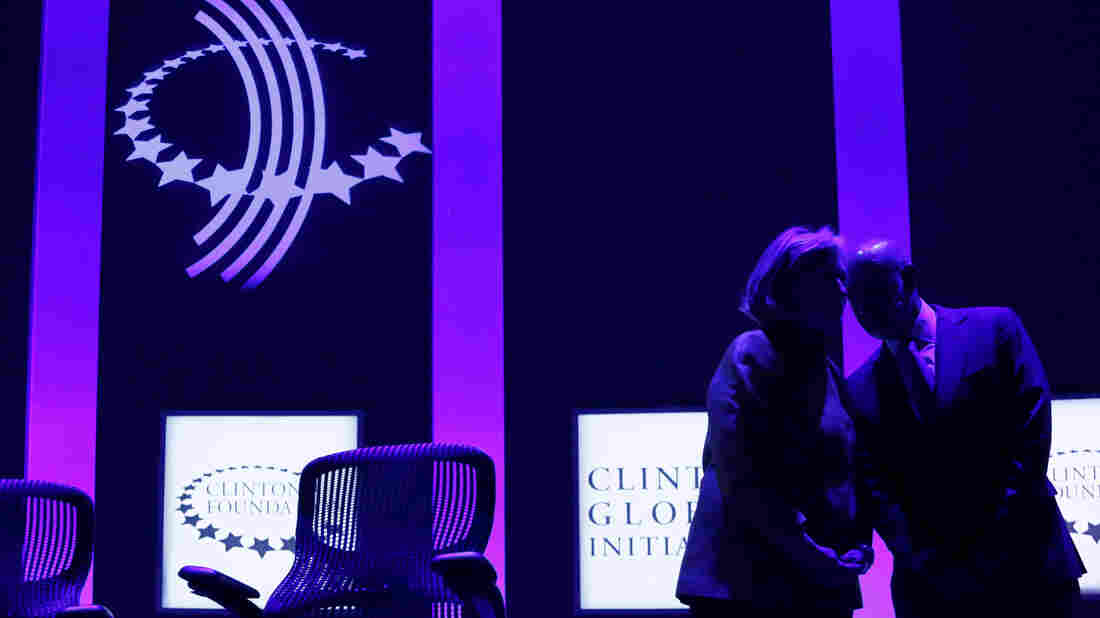 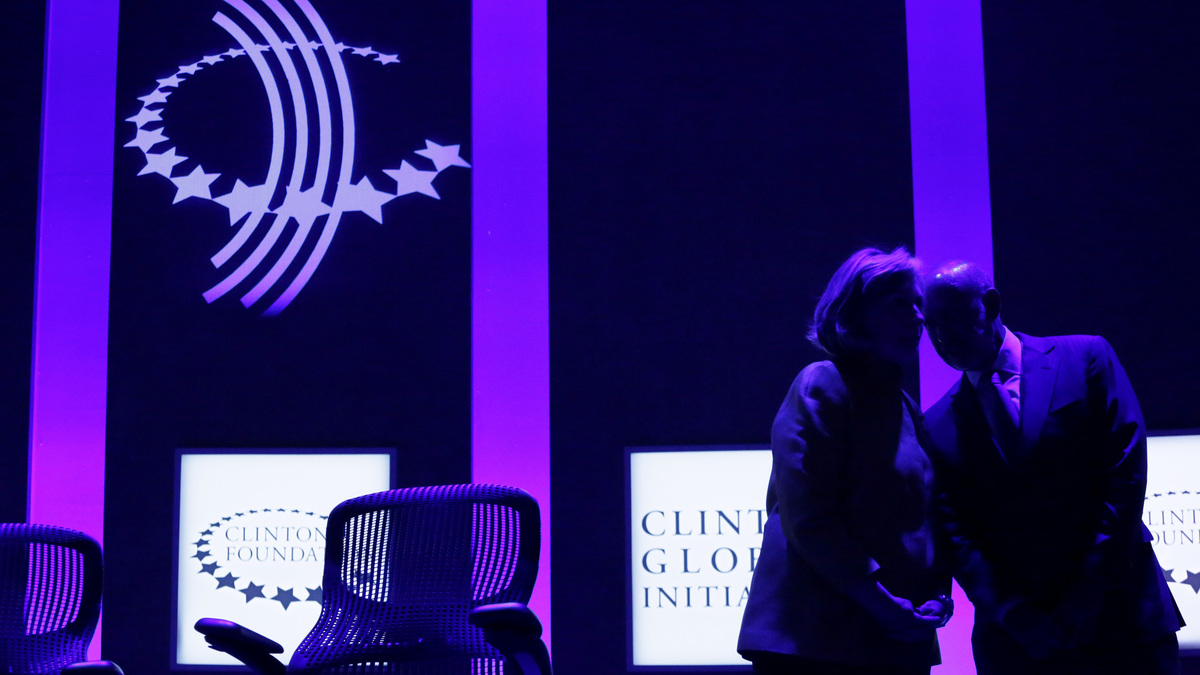 The Clinton Foundation and the Trump Foundation have similar-sounding names. And they've both become political targets in this election cycle. Beyond that, charities experts say, they have remarkably little in common. But the differences between them might reveal something about Hillary Clinton and Donald Trump.

"I think they're two very different types of charities," said Larry Noble, a lawyer at the Campaign Legal Center in Washington, D.C. "One of them is very professionally run and does a lot of work. The other seems to be more loosely run. And seems to be more focused on Donald Trump."

The most obvious difference between the two foundations is scale. The Bill, Hillary & Chelsea Clinton Foundation, as it's formally known, is huge. It has hundreds of employees and a $90 million budget. The Donald J. Trump Foundation, by contrast, is fairly small. It has no full-time employees and a budget of about $600,000.

During the vice presidential debate earlier this month, Republican Mike Pence argued that the Clinton Foundation is basically a slush fund for its founders.

"Less than 10 cents on the dollar in the Clinton Foundation has gone to charitable causes," Pence charged.

But charities experts say that statement is misleading.

"It's based on a misunderstanding," Noble said, "either intentional or unintentional, of what kind of charitable foundation it is."

The Clinton Foundation and concerns of favors for big donors

The Clinton Foundation is what's called a public charity. That means it mostly raises money from other people and foundations (including, by the way, a gift of between $100,000 and $250,000 from the Trump Foundation in 2009). The Clinton Foundation spends that money on things like HIV and malaria prevention in Africa. It spends close to 90 cents of every dollar it gets on charitable causes, and earns top marks from watchdog groups. 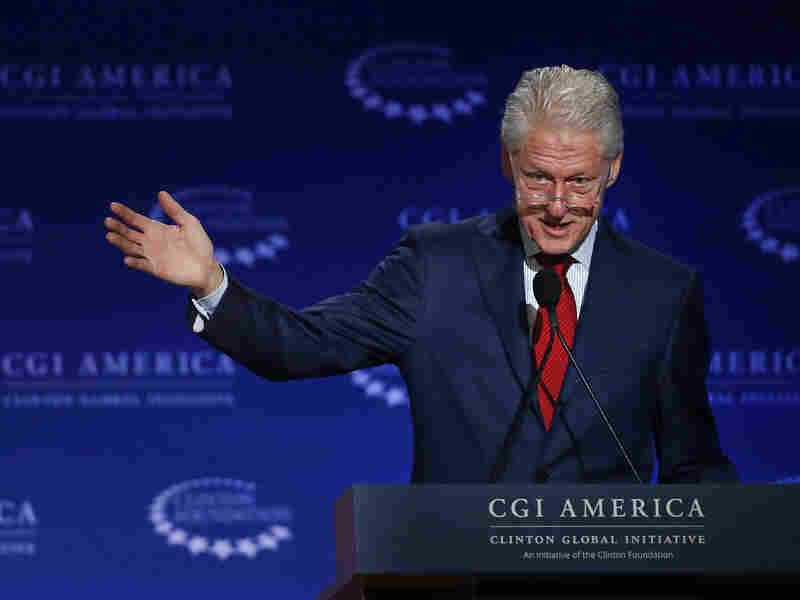 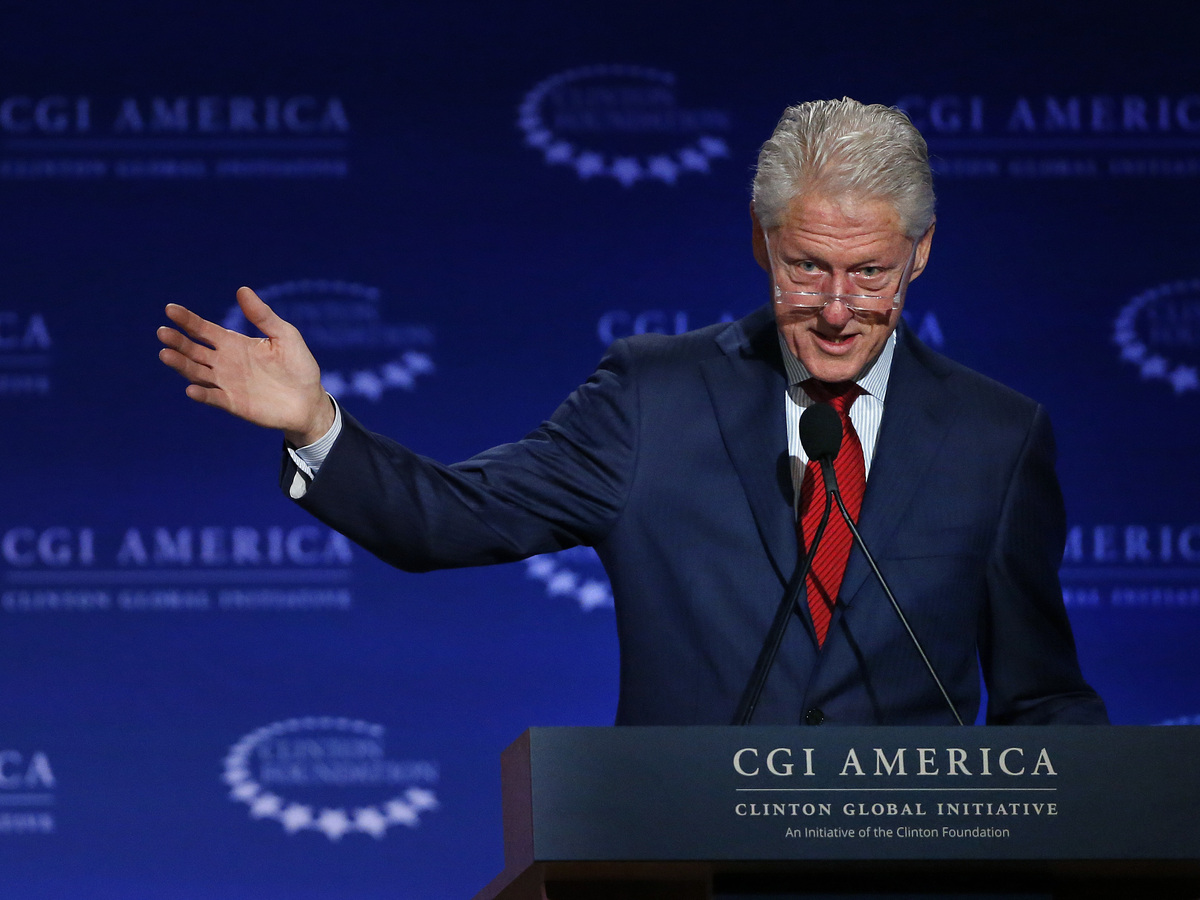 Former President Bill Clinton speaks at the annual gathering of the Clinton Global Initiative America, part of the Clinton Foundation, in Denver in 2015.

But there's another criticism of the Clinton Foundation, one that Donald Trump himself has raised on the campaign trail.

"Her foundation took in large payments from major corporations and wealthy individuals, foreign and domestic, and all while she was secretary of state," Trump said at a rally in Akron, Ohio, in August, for example.

It's true that the Clinton Foundation accepts money from wealthy donors, both inside the U.S. and out. Emails between the staff at the Clinton Foundation and State Department show that some of those donors wanted access to Hillary Clinton, and that she did take meetings with some of them as secretary of state. But there's no evidence that big donors got any special favors from the State Department.

Still, Noble said, appearances matter, "because we're talking about government officials. And the concern is when they get a large contribution, it will influence the decision they make. Even if, as secretary of state, she did not concern herself at all with what big donors wanted, people will think that it did, in fact, influence her. And it undermines the credibility of decisions."

The Trump Foundation and concerns beyond appearances

Charities experts have an entirely different set of concerns about the Trump Foundation — concerns that go beyond appearance.

"The Trump Foundation has engaged in documented, flagrant acts of violation," said Pamela Mann, a former head of the charities bureau in the New York attorney general's office. She is now a partner at Carter Ledyard & Milburn, LLP. "That's really different."

The Trump Foundation is organized as a private foundation. It was originally set up to give away Donald Trump's money. But as reporting by the Washington Post shows, Trump hasn't given any of his own money to the foundation since 2008. Instead, his foundation raises money from other donors, as it did at a fundraiser for veterans Trump held in January that raised $1.6 million in contributions, according to the Trump Foundation's website.

But that got the Trump Foundation in trouble, because technically it's not registered to accept donations in New York state, where it's based. This month, New York's attorney general ordered the foundation to stop fundraising in the state. 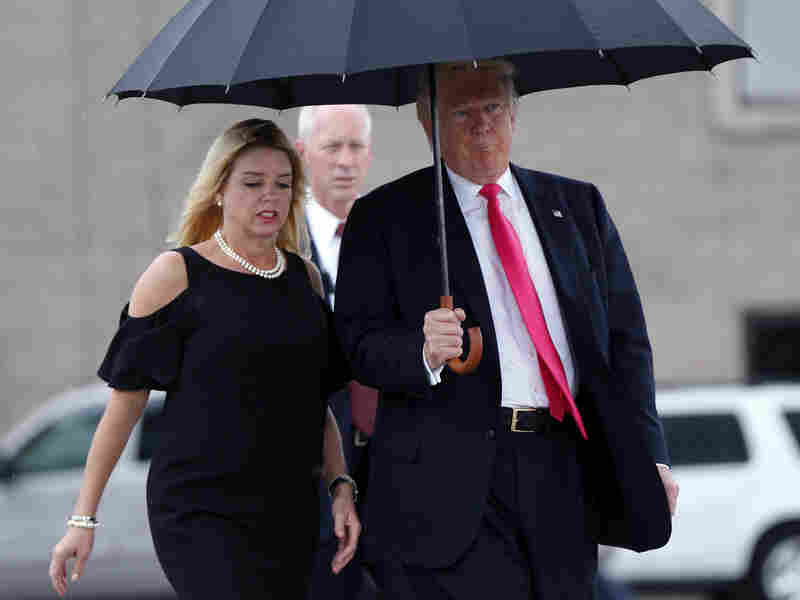 Republican nominee Donald Trump holds an umbrella while walking in the rain with Florida Attorney General Pam Bondi, as they arrive at a campaign rally in Tampa, Fla., in August. Gerald Herbert/AP hide caption 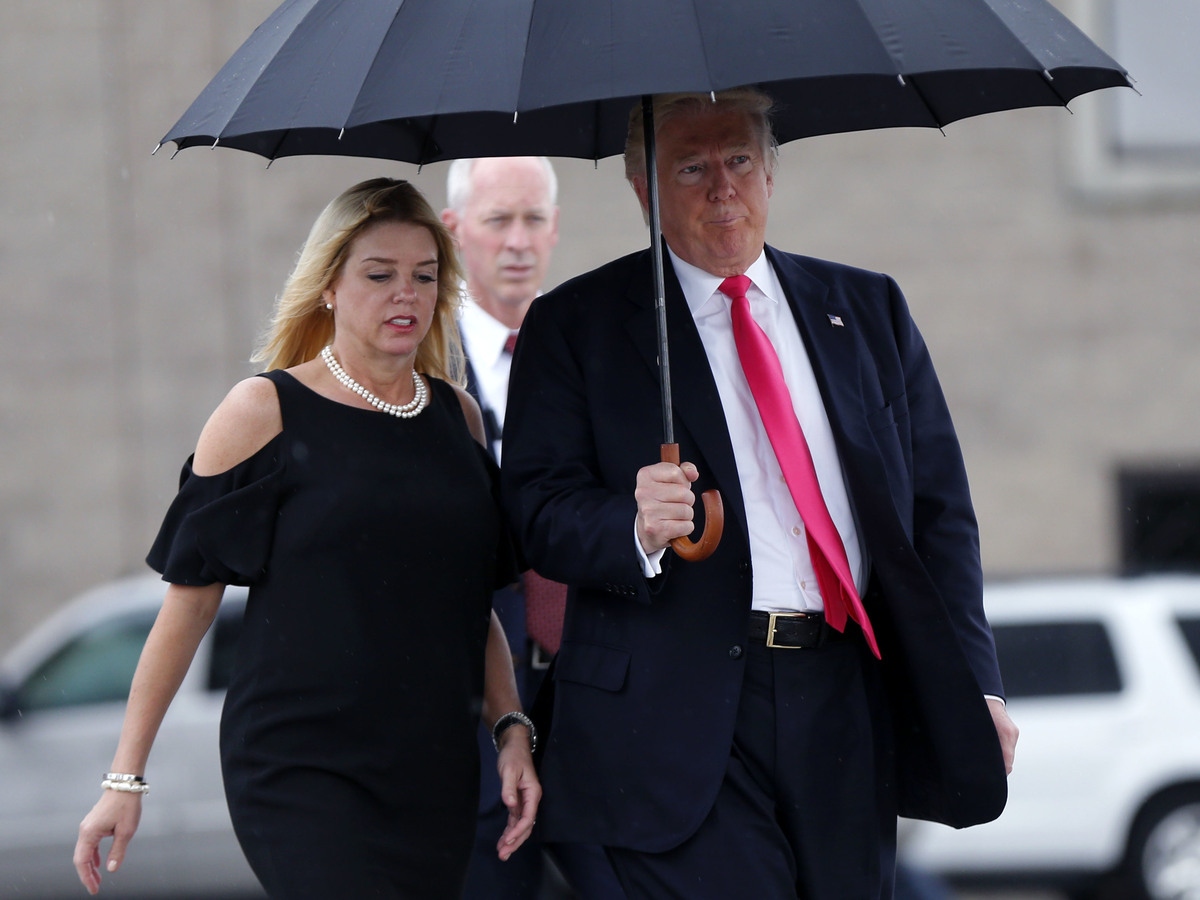 Republican nominee Donald Trump holds an umbrella while walking in the rain with Florida Attorney General Pam Bondi, as they arrive at a campaign rally in Tampa, Fla., in August.

The Trump Foundation broke IRS rules, too, when it made a contribution to a superPAC supporting Florida Attorney General Pam Bondi in 2013. Trump's foundation has described that contribution as a mistake and says Trump paid a penalty to the IRS. But Mann, the former charity watchdog, is skeptical.

"It suggests that they're not deeply concerned with playing by the rules," Mann said. "It's unclear whether that's because they don't know what the rules are, or they are willfully ignoring the rules."

There are also questions about whether the Trump Foundation has spent money on things it shouldn't have, including two paintings of Trump himself, and a Tim Tebow football helmet.

And there's evidence that Trump never delivered on his promise to donate $10,000 to help victims of the Sept. 11 attacks. New York City Controller Scott Stringer, who supports Hillary Clinton, told NPR his office pored over audited financial records for two big charities in the year following the attacks and found no donations from Trump.

"We found no evidence Mr. Trump contributed," Stringer said. "It's possible he gave anonymously, or in other ways. You'd have to ask him. Our review found Mr. Trump did not, in fact, contribute to these groups."

The Trump campaign did not respond to requests for comment.

Mike Pence: 'We Will Absolutely Accept The Result Of The Election'

The New York Daily News, which first reported the lack of donations to the funds, noted that Trump surrogate and former New York Mayor Rudy Giuliani said during the Republican National Convention this summer that Trump gave anonymously.

But "a spokesman for the controller's office told the Daily News that the office did not find any anonymous donations in its review of the earlier audit."

All this leads Noble at the Campaign Legal Center to ask whether Trump is really as generous as he claims to be. "It looks like he's trying to appear that he's very charitable," Noble said. "But if you pull back the curtain, it's grayer than that. It fits into a narrative of him using the charity for purposes of self-promotion."

The Clintons have released decades of tax returns going back to the 1970s. Those returns show much of the charity the Clintons have given has been to their own foundation.

And, of course, Critics argue that Hillary Clinton has used her family's foundation to promote her own political ambitions. And Noble agrees, to a point. But he says there's an important distinction.

"In the Clinton Foundation, it's really hard to deny they're doing good work," Noble said. "I do think it's fair to say they may have been somewhat tone deaf to some of the things they were doing. And I think that does play into this certain narrative. And it's a narrative she's had to deal with anyway, about trustworthiness."

But Noble added that it would be a mistake to treat the allegations against the Trump and Clinton foundations as equivalent. The two charities are about as different as the candidates themselves.