Accessibility links
Was There A 'Quid Pro Quo' Between FBI And State Department Over Clinton Emails? New documents released by the FBI have many Republicans calling for further investigation into Hillary Clinton's emails. 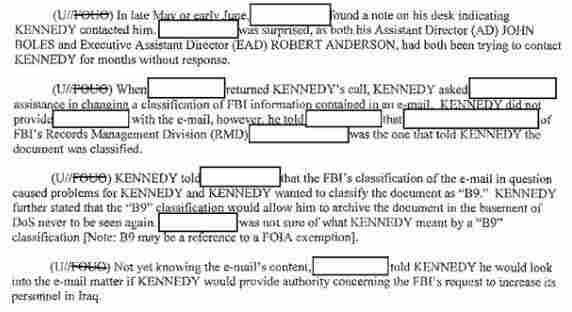 FBI notes from its investigation into Hillary Clinton's email server may indicate there was pressure not to mark emails as classified. Screen shot of FBI documents hide caption 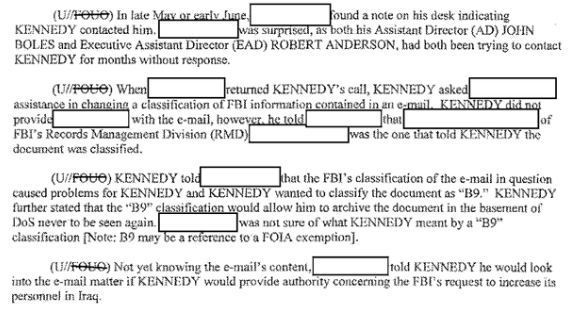 FBI notes from its investigation into Hillary Clinton's email server may indicate there was pressure not to mark emails as classified.

Hillary Clinton's emails are making headlines again, this time with the release of documents from the FBI's investigation into her use of a private email server while secretary of state. Critics say those documents show an "extremely disturbing" effort to get classification markings changed and even a possible quid pro quo. The agencies involved deny that charge strenuously.

The Republican chairmen of the House Oversight and House Intelligence committees have sent a letter to Secretary of State John Kerry calling on him to remove a high-ranking career State Department official, pending an independent investigation to "assure the public that he is not carrying out his duties in a corrupt, biased or underhanded manner."

This all dates back to spring 2015, before the FBI began its investigation, when the State Department was in the midst of the slow process of releasing Clinton's work-related emails to the public through the Freedom of Information Act (FOIA). Part of that process is getting agencies to review the documents and decide whether they contain classified information.

Disputes over the classification of documents and retroactive classification have featured prominently in the story of Clinton's email arrangement for more than a year, and such disagreements between government agencies are not uncommon.

The newly released investigative notes from the FBI contain claims that Under Secretary of State for Management Patrick Kennedy put pressure on people in the FBI and State Department to avoid marking Clinton emails as classified.

"Kennedy asked [redacted name] assistance in changing a classification of FBI information contained in an e-mail," reads the FBI notes.

"Kennedy told [name redacted] that the FBI's classification of the e-mail in question caused problems for Kennedy and Kennedy wanted to classify the document as 'B9.' Kennedy further stated that 'B9' classification would allow him to archive the document in the basement of the [Department of State] never to be seen again," the notes continue.

Some are interpreting this as meaning Kennedy was trying to avoid having the document available for public review through FOIA.

"[Name redacted] told Kennedy he would look into the e-mail matter if Kennedy would provide authority concerning the FBI's request to increase personnel in Iraq," the notes say.

Elsewhere in the FBI notes, it is alleged that this may have been the offer of a "quid pro quo."

The FBI didn't change its classification of the email, and the State Department did not approve the FBI's request to increase personnel in Iraq, so it seems there was neither a quid nor a quo. The email was released to the public in May 2015 in redacted form and concerned possible arrests in the Sept. 11, 2012, attack on the U.S. diplomatic compound in Benghazi, Libya.

"This allegation of a quid pro quo is inaccurate and does not align with the facts. To be clear: the State Department did upgrade the document at the request of the FBI when we released it back in May 2015. Furthermore, no increase in FBI Iraq slots resulted from this conversation.

"Under Secretary Kennedy sought to understand the FBI's process for withholding certain information from public release. As has been reported, there have been discussions within the interagency on issues of classification. Classification is an art, not a science, and individuals with classification authority sometimes have different views. There can be applicable FOIA exemptions that are based on both classified and unclassified rules. We have an obligation to ensure determinations as they relate to classification are made appropriately. Throughout the FOIA release process, we have been committed to releasing as much information to the public as possible, and ensuring that documents are withheld due to classification only when necessary to prevent damage to national security — as the Executive Order on classification calls for."

The FBI disputes the characterization as well.

"Prior to the initiation of the FBI's investigation of former Secretary Clinton's personal email server, the FBI was asked to review and make classification determinations on FBI emails and information which were being produced by the State Department pursuant to FOIA. The FBI determined that one such email was classified at the Secret level. A senior State Department official requested the FBI re-review that email to determine whether it was in fact classified or whether it might be protected from release under a different FOIA exemption. A now-retired FBI official, who was not part of the subsequent Clinton investigation, told the State Department official that they would look into the matter. Having been previously unsuccessful in attempts to speak with the senior State official, during the same conversation, the FBI official asked the State Department official if they would address a pending, unaddressed FBI request for space for additional FBI employees assigned abroad. Following the call, the FBI official consulted with a senior FBI executive responsible for determining the classification of the material and determined the email was in fact appropriately classified at the Secret level. The FBI official subsequently told the senior State official that the email was appropriately classified at the Secret level and that the FBI would not change the classification of the email. The classification of the email was not changed, and it remains classified today. Although there was never a quid pro quo, these allegations were nonetheless referred to the appropriate officials for review."

The suspicion raised by the release of these notes has caused alarm among leading Republicans. Donald Trump's campaign put out a statement from one of its most prominent national security advisers, retired Lt. Gen. Michael Flynn, which said, "These FBI documents provide undeniable proof that Hillary Clinton colluded with the FBI, DOJ and State Department to cover up criminal activity at the highest levels." The campaign has also called on Kennedy to resign and for Clinton to state publicly that he would not have a place in her administration, were she elected.

Crooked Hillary colluded w/FBI and DOJ and media is covering up to protect her. It's a #RiggedSystem! Our country deserves better! pic.twitter.com/n2NpH3zmcy

A statement from House Speaker Paul Ryan said the episode "bears all the signs of a cover-up."

As for the Clinton campaign, an aide said they weren't aware of the exchange between the FBI and Kennedy.

"It is well-known that there was strong disagreement among various government agencies about the decisions to retroactively classify certain material in emails sent to Secretary Clinton," said campaign press secretary Brian Fallon. "Agencies that took issue with this over classification did so based on their own beliefs, and we were not part of these disagreements that played out inside the government."