Accessibility links
Melania Trump Stands By Her Husband, Dismisses Comments As 'Boy Talk' The GOP nominee's wife said in an interview with CNN that she believes her husband when he denies allegations brought forward by multiple women that he groped or inappropriately kissed them. 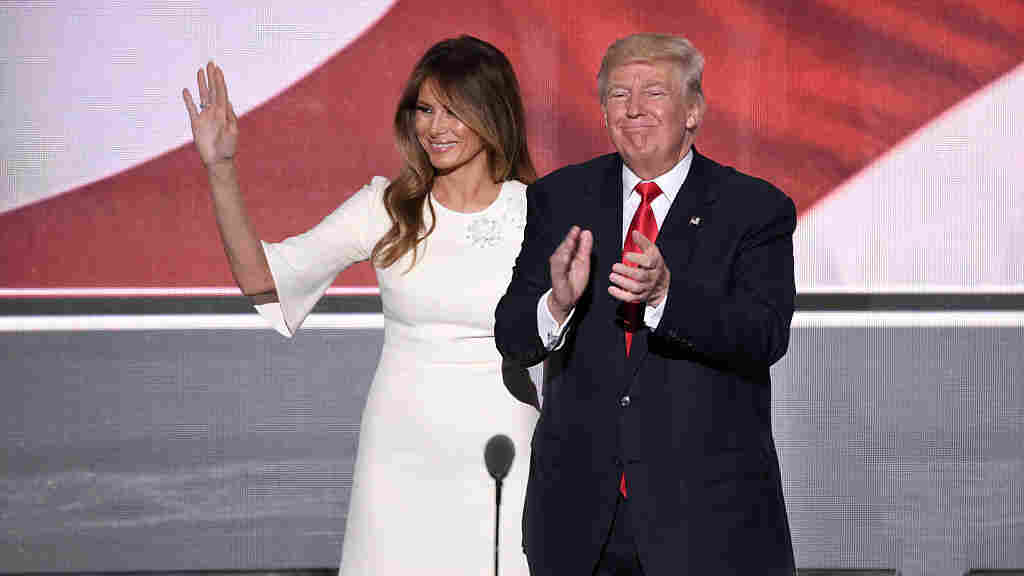 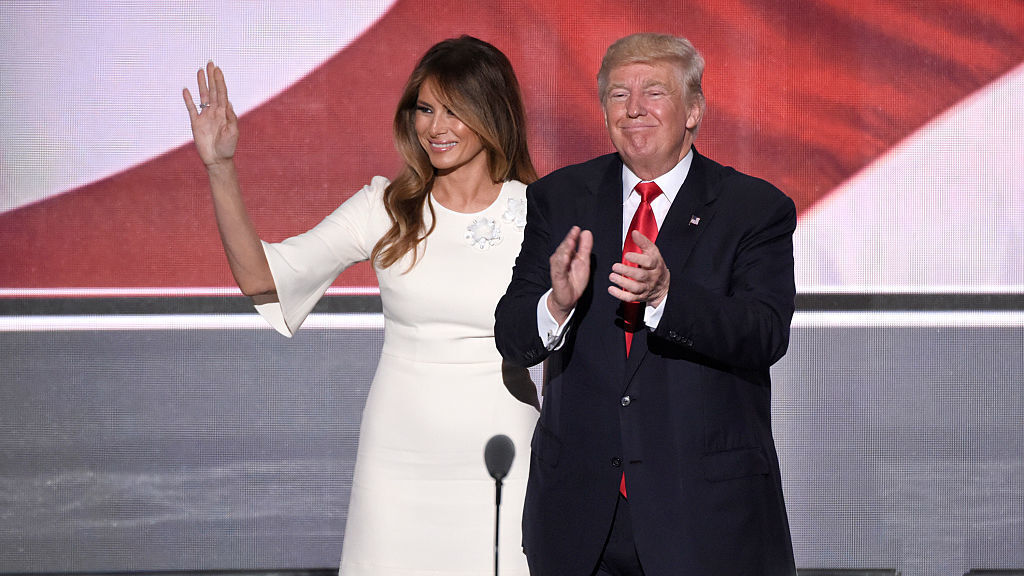 Melania Trump stands beside her husband, GOP presidential nominee Donald Trump, at the Republican National Convention in Cleveland in July.

Melania Trump is standing by her husband after multiple women have come forward claiming Donald Trump has groped them or kissed them forcibly in the past.

In an interview with CNN's Anderson Cooper — the first for the intensely private potential first lady since the scandal broke — Melania Trump said she believed the GOP presidential nominee's denial of the accusations and dismissed a 2005 video in which he used vulgar language about women as just "boy talk."

"I heard many different stuff — boys talk," Melania Trump said. "The boys, the way they talk when they grow up, and they want to sometimes show each other, 'Oh, this and that,' and talking about the girls. But yes, I was surprised, of course."

Melania Trump argued that Bush had "egged on" her husband to make the lewd comments. Bush was just let go from NBC's Today show after his comments surfaced.

"I said to my husband that, you know, the language was inappropriate. It's not acceptable. And I was surprised, because that is not the man that I know," she said.

Melania Trump also joked that her husband could sometimes act like a juvenile.

"Sometimes I say I have two boys at home — I have my young son and I have my husband. But I know how some men talk, and that's how I saw it, yes," she said. As Cooper noted, Trump is now 70 years old. He was 59 at the time of the 2005 video and had just married Melania, his third wife

Almost a dozen women came forward after the tape was released — and after Trump said in Sunday's second presidential debate that he had never committed the acts described — alleging that the billionaire and former reality TV star had, in fact, acted inappropriately toward them. One woman described how he groped her on an airplane 30 years ago and put his hand up her skirt, while another said he "touched her vagina through her underwear" at a New York club in the 1990s.

Melania Trump argued those women were "organized from the opposition" and that the media hadn't fully vetted the women's backgrounds. "They don't have any facts," she said.

She also said one reason she believes her husband is that she has seen him rebuff other advances from women.

"I see many, many women coming to him and giving phone numbers and, you know, want to work for him — inappropriate stuff from women. And they know he's married," Melania Trump said.

But recent polls have shown Trump now consistently trailing his Democratic opponent, Hillary Clinton, in part because the tape and allegations from multiple women have damaged him, particularly with female voters.

In a CBS News poll released Monday evening, 40 percent of registered voters said Trump's comments on the tape made them think worse of him. His support with Republican voters has dropped by 7 points since the tape and allegations surfaced, and Clinton now leads among female voters by 19 points — which would be the largest margin with women since 1972 if those numbers hold.

The Republican presidential nominee has forcefully pushed back against the latest claims, even attacking their looks by saying one of the women "would not be my first choice."

Melania Trump dismissed that as just her husband being defensive and "real."

"He's raw. He tells it like it is. He's kind. He's a gentleman," she said. "He supports everybody. He supports women. He encourages them to go to the highest level, to achieve their dreams. He employs many, many women."