Accessibility links
5 Reasons Why Donald Trump Is Wrong About A 'Rigged' Election Donald Trump is insisting the presidential election will be rigged. There is about zero chance of that happening. It would require an unprecedented, bipartisan and broad-sweeping conspiracy. 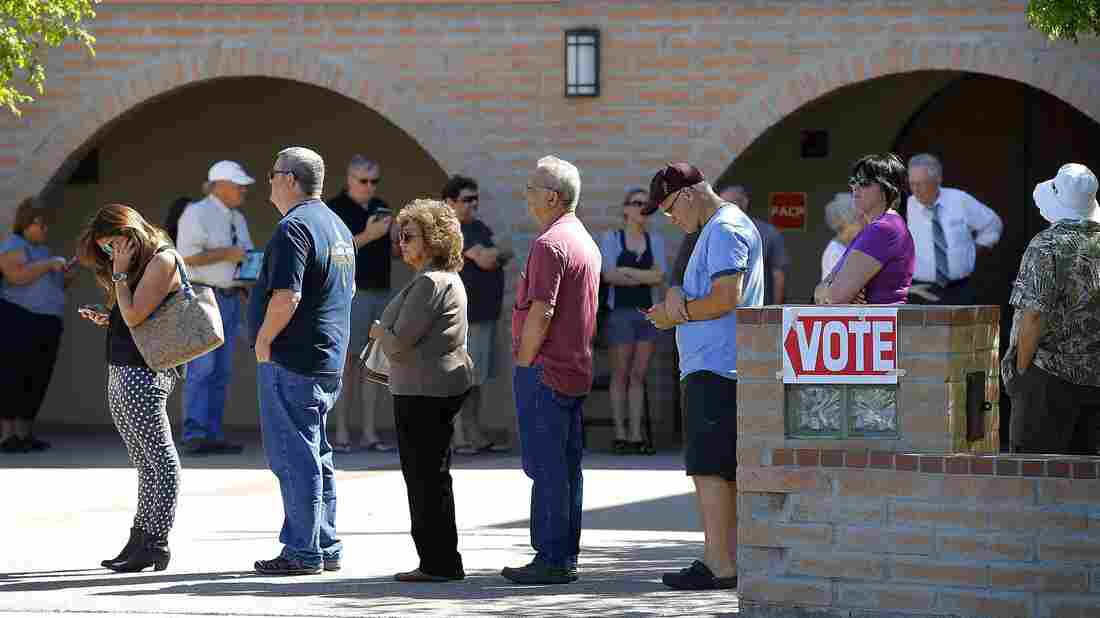 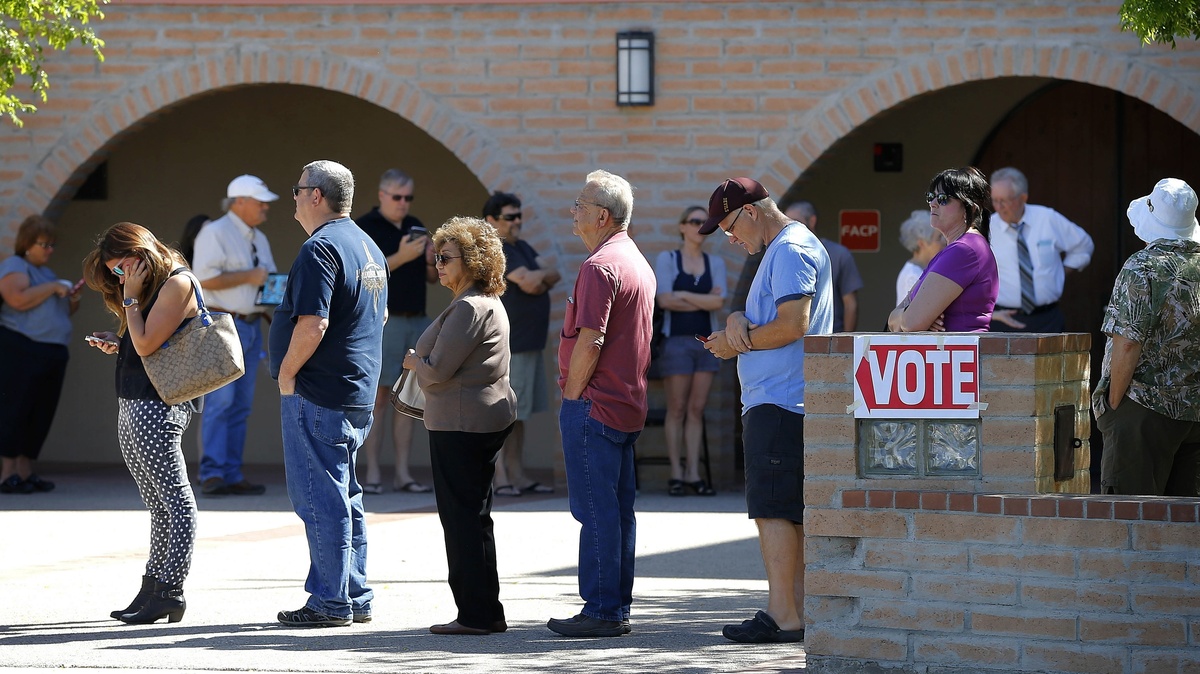 Voters wait in line to cast their ballot in Arizona's presidential primary election in Gilbert, Ariz., in March.

Donald Trump is warning that the election will be rigged. He has precisely zero evidence to back up that claim. But he has a remarkably receptive audience.

Around 30 percent of Americans have "little or no confidence" that votes will be counted accurately — and Trump's voters are far less confident about that than Clinton's.

That means that potentially millions of Americans will turn out to vote on Nov. 8, despite apparently believing their votes may not count at all. But to believe the election will be "rigged" is to believe that any number of improbable things will happen.

Here's a handful of reasons not to worry about any "rigging":

1. The election is decentralized

Yes, election-rigging worked on Scandal, when a super-secret cabal of five people (including the first lady AND the White House chief of staff) flipped the election by fiddling with a single voting machine in Ohio.

But then, Campaign 2016 is not a Shonda Rhimes production. Which is to say: Rigging the election would be much, much harder than this. For one, there are a few options of where to try doing that voting-machine fiddling. Where would you begin? Ohio? Florida? Iowa? Arizona?

After Attack On N.C. GOP Office, Politicians Decry 'Attack On Our Democracy'

"Conceivably one could focus on the few states that factor into the Electoral College," Walter Mebane, a political scientist who focuses on voter fraud at the University of Michigan, told NPR in August. "And maybe that turns into a few hundred or a few thousand precincts."

And that would be difficult to do because — let's repeat this again — elections are not federally run. States run them themselves. Trying to twist the results in a bunch of different precincts run by different authorities would be monstrously difficult. And even if one could somehow pull it off, then there's the problem of people's big mouths.

"So, say, 400 precincts in a big conspiracy, and no one will know?" Mebane added. "That's not gonna happen."

2. State officials are on guard

Secretaries of state are charged with administering elections in each state. And on Monday, Ohio Secretary of State Jon Husted, a Republican, insisted that rigging won't happen.

"First of all, I can reassure Donald Trump: I am in charge of elections in Ohio, and they're not going to be rigged. I'll make sure of that," he told CNN. "Our institutions, like our election system, is one of the bedrocks of American democracy. We should not question it or the legitimacy of it. It works very well. In places like Ohio, we make it easy to vote and hard to cheat."

Vice President Biden: 'Trump Is Out There Doing Something Very Dangerous'

And he's no enemy of Trump — Husted, by the way, said later Monday that he will vote for the Republican nominee.

Multiple other secretaries of state have likewise asserted that the elections in their states will not be rigged.

In addition, considering that the cries of election rigging are overwhelmingly coming from the right, there's another reason to be skeptical, as the AP's Nick Riccardi pointed out: Many of the closest states — Ohio, Iowa, Arizona, Florida, North Carolina, Alaska, Georgia — have Republican governors. That means the rigging would have to take place under Republican administrations — people who would, theoretically, have more reason to want Trump rather than Clinton to win.

3. Clinton is already leading by a lot

With a really close race, there could potentially be more of an argument that "rigging" the election would be possible (with irregularities in particular counties or precincts, which would be challenged and subject to recounts and oversight and courts weighing in).

But the way things look right now, that doesn't seem likely to happen.

"If the polls in November look like they do now, then I don't see much of an issue," Vanderbilt University political science professor Marc Hetherington told NPR in August. "No one will find credible charges of election fraud if it looks like a blowout in advance."

At the time, Clinton was far ahead of Trump — she had an 83 percent chance of winning to his 17, according to FiveThirtyEight. Now, it's looking slightly better for Clinton — 88 percent chance to his 12.

It's true that some states will be close. But if Clinton is far enough ahead in enough states — which is looking increasingly likely — then it wouldn't be necessary to rig the election. (Or you'd have to believe that many polls in many states are rigged, which isn't happening.)

4. Election fraud is rare (and it's not quite "rigging," either)

Multiple analyses have found the problem of voter fraud to be sparse.

According to Loyola Law School professor Justin Levitt's comprehensive analysis, there were only 31 incidents of the type of voter fraud that could have been prevented by voter ID laws — that is, voter impersonation — from 2000 through 2014. Another analysis from News21 looked into 2,068 allegations of election fraud and found only 10 cases of impersonation.

Still, Trump and Pence have told their supporters to head to the polls to make sure people are voting fairly on Election Day. But even then, they could easily miss some cases of fraud, because fraud via absentee ballots is "unfortunately quite real," as Levitt told The Washington Post in 2014.

Furthermore, as election lawyer Chris Ashby pointed out on CNN Monday afternoon (after an epic tweetstorm over the weekend), individual instances of voter fraud aren't exactly "rigging" anyway. This isn't just semantics — yes, voter fraud is a bad thing. However, calling an election "rigged" implies a systematic, coordinated effort to cause one candidate to win.

We'd be entirely remiss if we didn't point to Ashby's excellent Medium post spelling out a few more reasons to be skeptical of "rigging" allegations. For example:

Let’s dispense with this notion that the election is rigged, shall we? -1

-- elections are held in public places and staffed by private citizens;

-- party officials and lawyers are at the ready to challenge if needed;

-- voting machines have systems in place to prevent fraud — for example, they are "equipped with multiple interconnected counters that make it impossible to add or remove votes secretly" (sorry, Olivia Pope); and ...

-- representatives of both candidates and parties observe vote-counting.

So if someone tells you the election is rigged, it's just not true.