Accessibility links
In 'Moonlight,' Growing Up Black, Gay And Poor In 1980s Miami Directed by Barry Jenkins and adapted from a play by Tarell McCraney, Moonlight is an intimate, authentic portrait of a young man and his world — and the intimacy he learns with lovers and mentors. 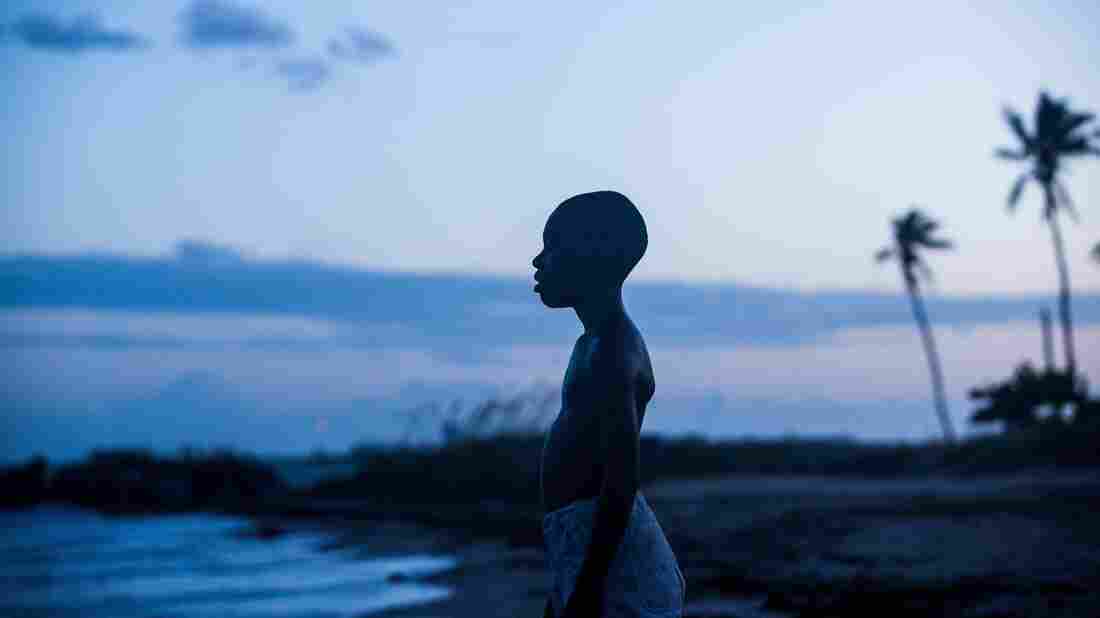 Alex R. Hibbert as Chiron, a young black man growing up gay in an impoverished part of Miami in Moonlight. The film is told with different actors playing Chiron at different stages of his life. David Bornfriend/A24 hide caption 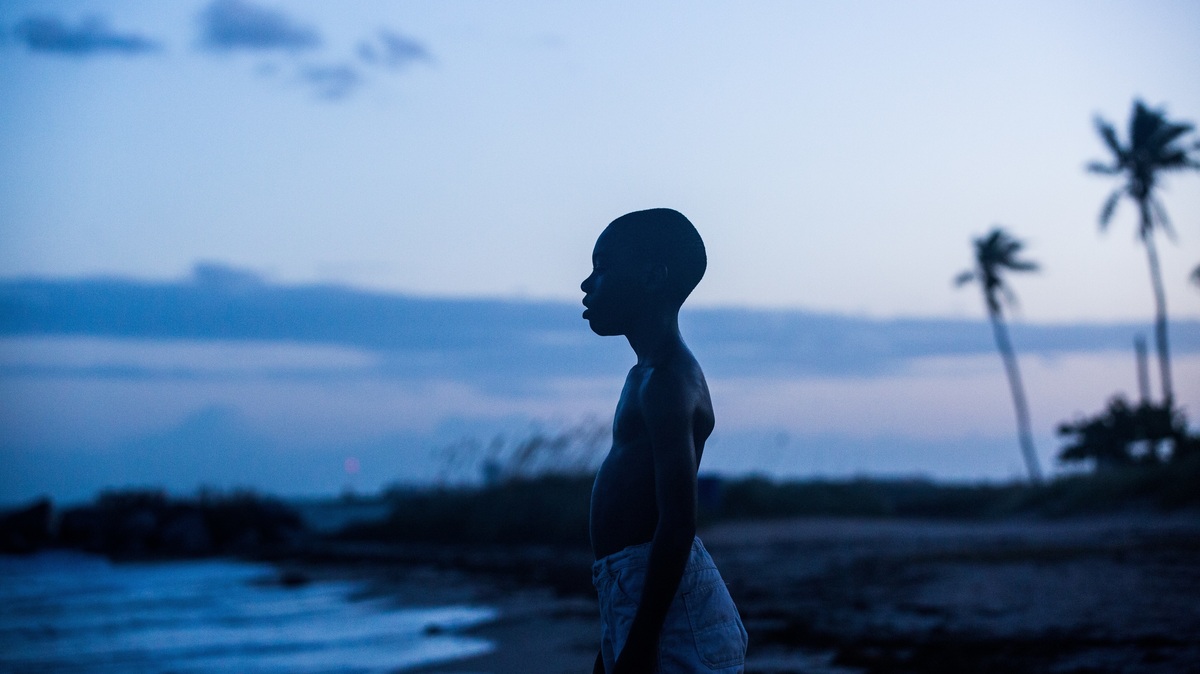 Alex R. Hibbert as Chiron, a young black man growing up gay in an impoverished part of Miami in Moonlight. The film is told with different actors playing Chiron at different stages of his life.

The new movie Moonlight is set in Miami in the 1980s, at the height of the war on drugs. It's an authentic, intimate portrait of a young, gay black man whose mother is a crack addict. We first meet Chiron as a 10-year-old boy, getting chased by bullies through the streets of the city's impoverished Liberty City neighborhood. Chiron ends up cowering inside a boarded-up crack house.

"He's a not an understood boy," says Alex R. Hibbert, the actor who plays shy Chiron. "He's been bullied a lot, abused. And he's trying to find his way. And he's judged a lot about his sexuality and who he likes and what he likes."

It's the 12-year-old actor's big screen debut. Hibbert himself grew up in another Miami neighborhood, "not as bad as Liberty City was, but it's, like, bad-ish." Hibbert agrees that the movie offers a very authentic view of the complex relationships formed in the 'hood. "In my community, there's people there that care for you, even though they do bad stuff, like, they sell drugs and stuff," he says. "But, inside they care and they have a heart."

In the movie, a local drug dealer named Juan becomes Chiron's mentor. In one scene, Juan teaches Chiron how to swim in the ocean. Actor Mahershala Ali plays Juan — he says his character, a black Cuban man, relates to Chiron as an outsider.

"The way they connect and the way he guides him is in the manner in which a father does." He says Juan relates to the 10-year-old Chiron because they're both outsiders. "He's able to impart a certain degree of knowledge or at least try to unlock Chiron in some of the things that he's dealing with."

Yet Juan is also responsible for supplying the very drugs that Chiron's mother, Paula, uses. Chiron witnesses her descent from being a responsible nurse to a crack addict, begging him for money.

I thought back on growing up in the village, there were these men who would every now and then just go out of their way to be like, naw, naw, naw, don't do that. ... And I hadn't really seen it sort of done in a movie or a TV show, carrying the warmth that I think it carries for the characters in this film.

British actress Naomie Harris says that at first, she had been nervous about portraying Paula — a type of person often depicted as a stereotype. Harris says she had to let go of her judgment about the character and offer a three-dimensional view of her.

"I found that addiction is just a way of coping with pain. We all have pain, but we might be dealing with it in ways that are more socially acceptable. I want people to realize there's less distance between themselves and Paula than they realize," she says.

"To really play this part, I had to learn to love her and have compassion for her, by really realizing that actually she's doing the very best that she can with the resources she has at that time."

It's left to drug-dealing Juan and his girlfriend Teresa to help Chiron navigate growing up. In her acting debut, singer Janelle Monae plays Teresa, who becomes Chiron's surrogate mother. "With the world constantly chattering in his head about who he should be and who he should not be, I'm the one person who is mentoring him and listening to him, alongside Mahershala's character," Monae says of Teresa. "I don't judge him and I'm there for him and I'm allowing him the space to just be."

The film is told in three acts, with different actors playing Chiron at different stages of his life. In the first act, he's a child. In Act 2, he's in high school. In Act 3, he's an adult. And as an adult, Chiron reconnects with Kevin, his first love.

"There's often this idea of boys don't cry and toughen up, man up," says actor Andre Holland, who plays grown-up Kevin. "And at the same time, well, don't be too angry or too aggressive, because that has serious ramifications, as we continue to see."

Holland says black men in particular have had to negotiate those ideas. In Moonlight, he says, the characters are learning what it means to be men. "They're also trying to figure out what their sexuality is. And I think it's really remarkable that these two men have found a way to be open and vulnerable and intimate with one another. Not just sexual but truly intimate."

Playwright Tarell Alvin McCraney and director Barry Jenkins say they also wanted this story to be an intimate portrayal of the place they both grew up in in the 1980s: Liberty City. They went to the same elementary school, but they didn't meet until a few years ago, after Jenkins read McCraney's play, In Moonlight Black Boys Look Blue. It's based on the playwright's childhood.

"I remember some of the worst days of my life were also some of the most beautiful naturally," says McCraney. "The poinciana would be in full bloom and falling on your head, so you'd see these yellow flowers everywhere, but, you know, I had just gotten either beaten up on a corner or saw somebody get shot."

Moonlight director Barry Jenkins had a different experience in that same neighborhood. He was not gay, and he played football. But he and McCraney have a shared history: Both of their mothers were addicted to crack.

"I remember being my mom's buddy," recalls McCraney.

"Like partners," agrees Jenkins. "We were homies. We were a team."

"We were in it together," says McCraney. "And then at some point, we weren't."

The playwright's mother died of AIDS, while the director's mother is in recovery. Neither knew their fathers.

Jenkins says he wanted to explore those experiences in this film. And he was struck by the ways in which the men in the story interact, "the gentleness and the kindness of the character Juan. And knowing that he was based on something in reality," says Jenkins. "When I jogged my memory, I thought back on growing up in the village, there were these men who would every now and then just go out of their way to be like, naw, naw, naw, don't do that. Leave that guy alone, or this or that. The men give each other dap, you know? And it's something very, very common in the black community. And I hadn't really seen it sort of done in a movie or a TV show, carrying the warmth that I think it carries for the characters in this film."

Jenkins says he also wanted to give a realistic feel and language to his film. As a result, it looks and sounds like real people talking in 1980s Liberty City.

Jenkins says the first time he showed the film to his agent, "he was like, 'you might need subtitles for that opening scene.' And I was, like, nah, bra, that's just Miami."

McCraney says he appreciates how the film preserved the story, the look, the feel and the sounds of his childhood. "That accent is thick and musical," he says. "Like if you're watching Shakespeare, it takes you a minute to get attuned to it, to get involved, and that's good. It's like, wouldn't you like to come visit these wonderful people? ... Yes, this guy's a drug dealer, I know what he does, but let me into his world for a moment."

McCraney and Jenkins hope that even after the credits roll, the moonlight lingers on these characters.