Accessibility links
For Film's Creators, 'Moonlight' Provided Space To Explore A Painful Past Playwright Tarell McCraney and filmmaker Barry Jenkins drew on their own childhood experiences in making Moonlight, a film about a boy growing up in a Miami housing project. 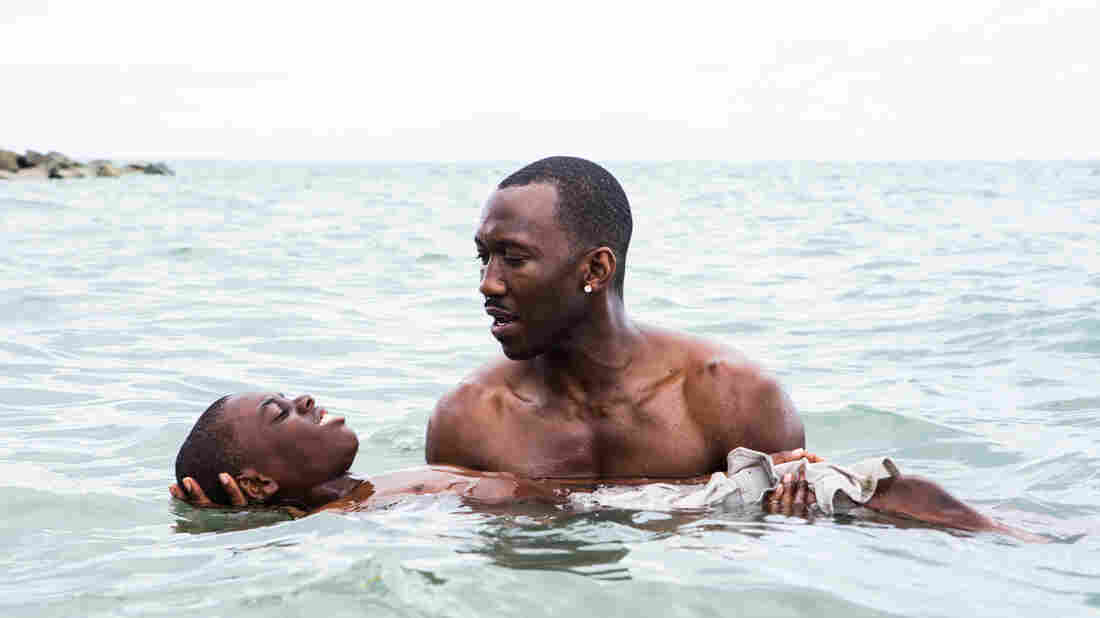 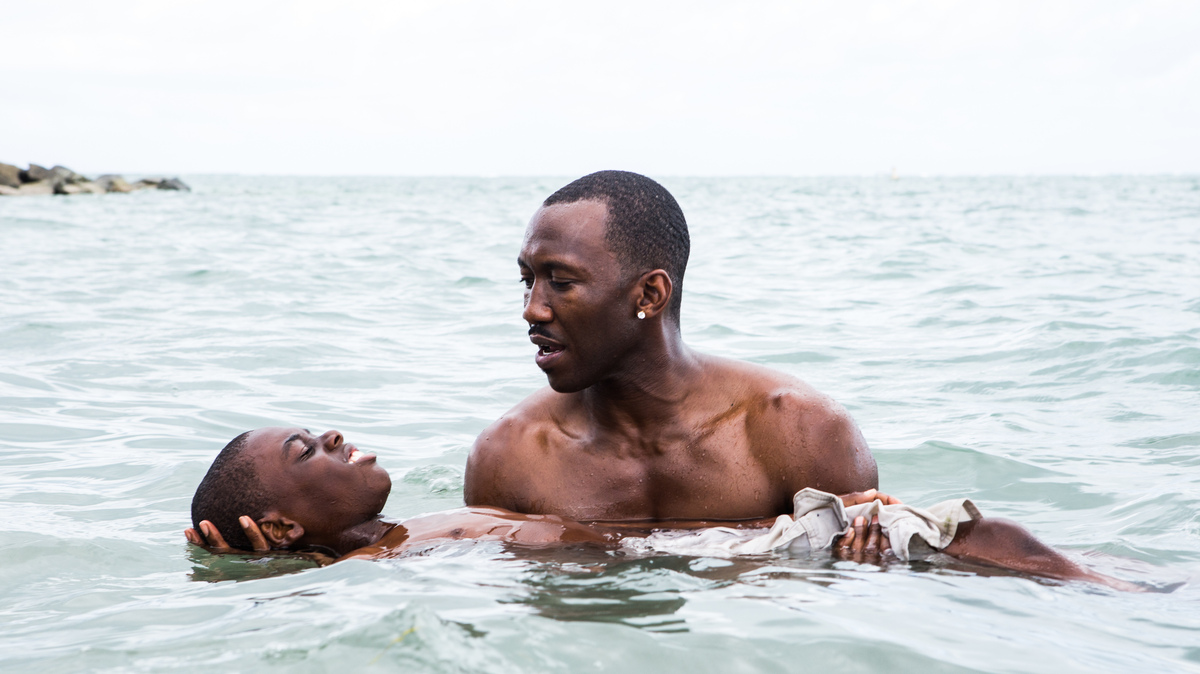 Juan (played by Mahershala Ali) teaches Chiron (Jaden Piner) how to swim in Moonlight. The film is told with different actors playing Chiron at different stages of his life.

Filmmaker Barry Jenkins and playwright Tarell McCraney grew up just blocks away from each other in the same housing project in Miami's Liberty City neighborhood. They went to the same elementary school at the same time, but they did not meet until they were adults, when Jenkins contacted McCraney about adapting his play, In Moonlight Black Boys Look Blue, to the screen.

Jenkins tells Fresh Air's Terry Gross that he was drawn to McCraney's main character, a young African-American boy named Chiron who lives in a Miami housing project with his mother, who is addicted to crack. "I saw myself in this character," Jenkins says. "Tarell did this great job of creating a character who, over the course of the years, kind of retreats, retracts within himself, to escape the world around him."

Jenkins and McCraney went on to collaborate on the new film Moonlight, which tells the story of Chiron's life and the bullying he endures for being effeminate. Though the movie is a work of fiction, it draws on its creators own childhood experiences.

Both men grew up in poverty with mothers who were addicted to drugs. "There were times when we were without food and the lights got turned off often," McCraney says. "If I did get money from an aunt or a grandmother or whoever, more often than not my mom would find a way to take it or talk me out of it, or sometimes the TV would disappear, or sometimes the furniture would disappear."

For his part, Jenkins credits McCraney for helping him address the hardships he faced as a child by giving him the opportunity to put it in his work. "The beauty of working with Tarell and knowing Tarell is he has provided the space for me to ... be open and honest about some of these things," says Jenkins. He's grateful to McCraney for helping him "feel whole."

Tarell McCraney: The drug dealer who was in my life was a man named Blue, who was dating my mother at the time, and sort of came into my life when I was 5 or 6 years old and was very affectionate to me, very kind to me, very generous to me in a way that I hadn't quite experienced with many male figures, including my own father at the time.

I just remember at some point thinking, He treats me like I'm his son, regardless of the fact that I don't share any of his blood. I did know that he was a drug dealer, and I did know that my mom did drugs. Those conversations were had, but not as eloquently as Barry made them happen [in the film]. ...

On the impact that Blue's sudden death had on him

McCraney: I came home from a weekend, I actually think it was my birthday weekend, I had gone away to my biological father's aunt's house and I came home and my mom said, "Blue's dead and he's not coming back anymore." 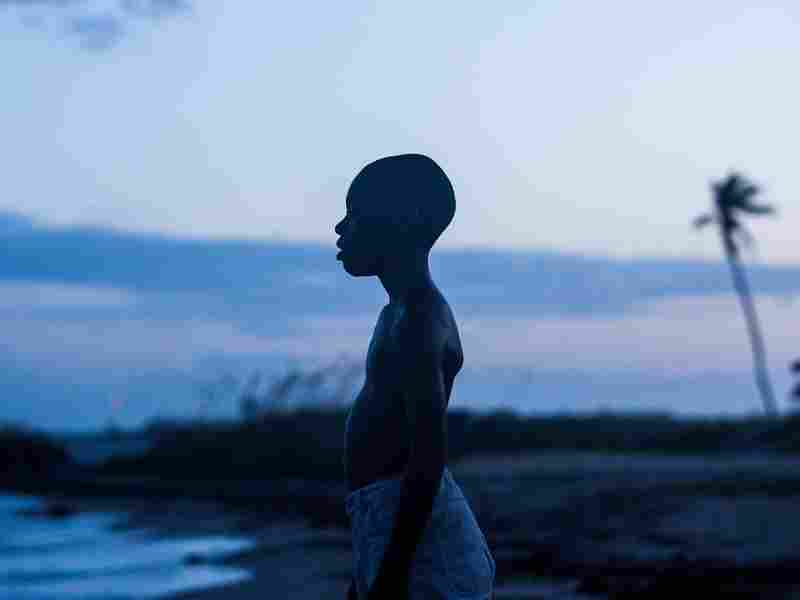 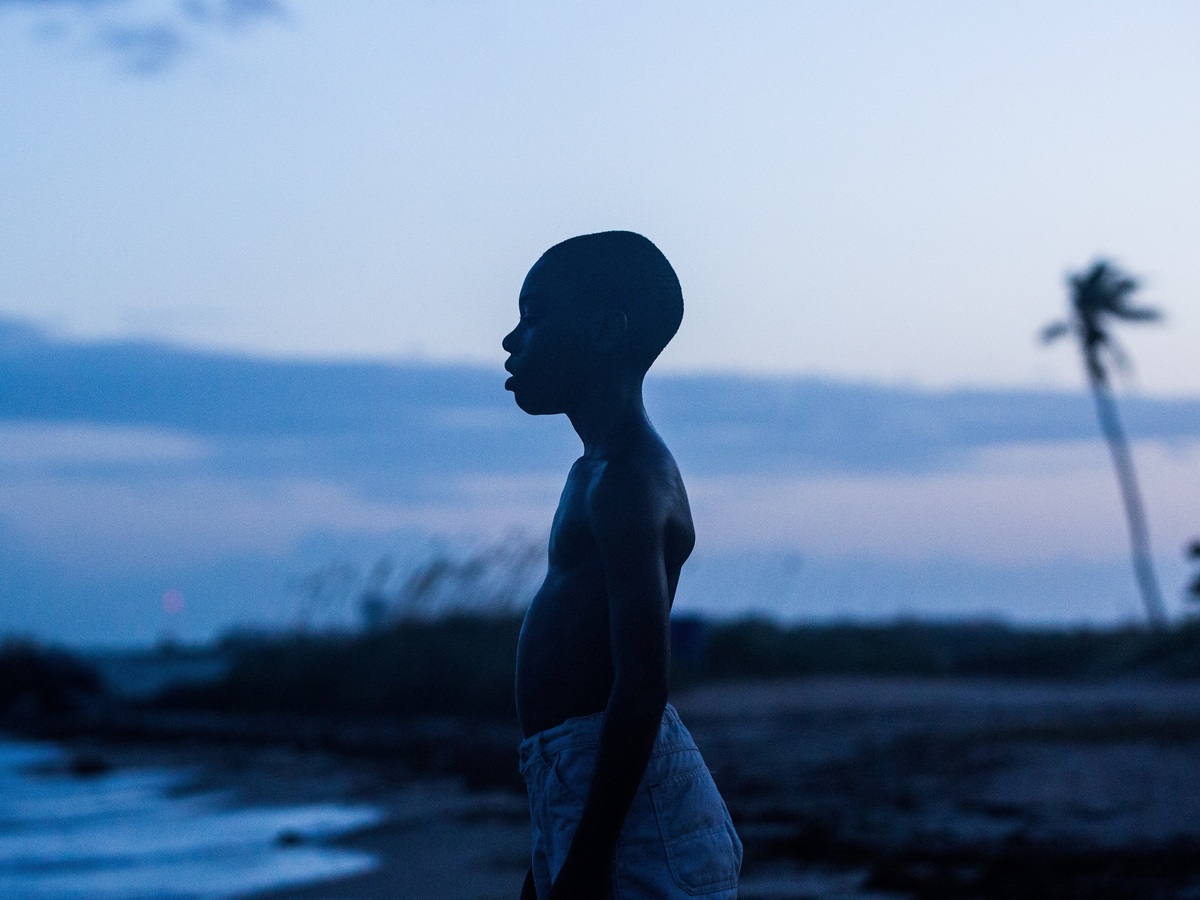 Alex R. Hibbert plays Chiron, a young black man growing up gay in an impoverished part of Miami in Moonlight.

He had been shot and killed over the weekend ... by we assume rival drug members in the neighborhood. ... I just remember feeling like, I need to start counting now. I need to pay attention now, because when I go away, things will go away. When I stop looking, when I stop paying attention the things that I care about, the things that are good to me will disappear. ...

I think that fear sort of stayed with me and stays with me. I didn't write the original script [for the play] In Moonlight Black Boys Look Blue until my mother passed away in 2003. She died of AIDS-related complications. ... I graduated from undergrad and she died the next month ... All throughout undergrad I felt like I should've been there at her bedside instead of in school. And so it found its way in my work often. Most of my plays talk about it and certainly this film did.

On the way Chiron is bullied in the film, and the way it relates to McCraney's own childhood

McCraney: It took me a long time to figure out what gay meant to me. Even to this day I have to qualify people, because ... gay to them in their sort of heteronormative thinking of it is means that I only engage in sexual acts with men, and to me gay means being in an intimate, loving relationship with a person of the same gender to me.

It took me a long time to come to that, because I didn't really actually understand that and I couldn't understand why people were calling me gay, I certainly had an attraction to women, still have an attraction to women, but what they did see me do or what they could see in me is that I was more graceful than the other boys. I was less rough and tumble. I wanted to go to ballet class, I liked spinning around in circles. I crossed my legs when I sat down. I didn't walk like I had just gotten off of a horse. Those things were things that they saw in me instantly.

On being quiet and inhibited as kids

Jenkins: I was a super, super quiet kid. Growing up the way I did, I was raised by a woman who took my mom off the street when she was pregnant with my sister and there's a certain kind of love that was implicit in that, because I was no blood relation to this woman, and yet she allowed me to stay in her house.

But I always felt just a little bit of distance from everyone else, so I kind of kept to myself and when Tarell allowed me to sort of run with the play, I kind of made a very hard decision that [Chiron] was going to emote with his body, and in particular with his eyes, and not so much with his words. I wanted when he spoke for those things to really, really count.

McCraney: I was in performing arts high school so you had to say something, but I remember there was this moment where I would get on the train to go home to Liberty City and as the train entered the city limit I would shut down. I would just become much more akin to what you see in the film than I was at school. People couldn't make heads or tails of it. I had teachers who would say when I came in the morning it took me 'till noon before I became the person that they knew again, and then I would go right back to going home and then kind of becoming recalcitrant all over again.

On their mothers' addiction to crack cocaine

Jenkins: I believe I was 7 when my mom had her first overdose. I remember I was on my way to school and I couldn't tie my shoe correctly, so it must've been like 1st grade or 2nd grade, like 7, 8, but I remember my aunt came and said, "You have to go to school" and I said, "Well, my mom's sick," and they said, "That's OK." I remember there were paramedics there. I didn't know what I would do after school.

McCraney: I was much younger. I was 3 or 4, I want to say. I remember it as just these snippets of imagery, of things going on around this very small apartment that I could see but could not see, which I think was an inspiration for the hallway with the pink light in Moonlight.

My mom was a very hard, hardworking working-class, single mom. I have a brother and a sister who are 9 and 10 years older than me, and so for them I think it was a much more jarring process, because they knew this very, very strong woman and then very rapidly I remember over the course of weeks everything kind of just got torn apart, and it literally felt like she just disappeared. Everything just changed overnight.

Jenkins: I was very jarringly thrown back into this time with my mother, reliving some things that actually happened and some things that clearly happened to Tarell, and it was just the most difficult thing I think I've ever had to do in my life, because I've gone a long time without thinking of my mother as that person, because I do think that's a whole other person from the mother I know now. I think because of that I hadn't really dealt with what that time was like, or what she went through. ... It just opened up this portal where I saw so many other things that aren't in the film that I know my mom went through.

On McCraney's mother being molested, and the way she used drugs to self-medicate

I found compassion, I found empathy for what she was saying. It still didn't make me feel better that drugs were the only way that she could get that quiet, or at least try to get that quiet, but I understood.

McCraney: I remember my mother, very close to the end of her life, confiding in me that that's how it started for her, that she had been molested for a very long time and had been trying to find some way to cope and thought having children and having a family would do that, but it just didn't quiet that pain inside of her. ...

I found compassion, I found empathy for what she was saying. It still didn't make me feel better that drugs were the only way that she could get that quiet, or at least try to get that quiet, but I understood. ... I also know that she was trying to figure out whether or not I had been molested as a child, which I was, and I wouldn't tell her. I wouldn't say it. She just broke down in tears and she was like, "The reason why I'm saying this is because I don't want you to have this burden on you like I have it on me."