Accessibility links
With A Second 'Jack Reacher,' Tom Cruise Finally Exceeds His Grasp After a five-year winning streak as Hollywood reigning action hero, Tom Cruise falls back to earth with a can't-miss sequel that misses. 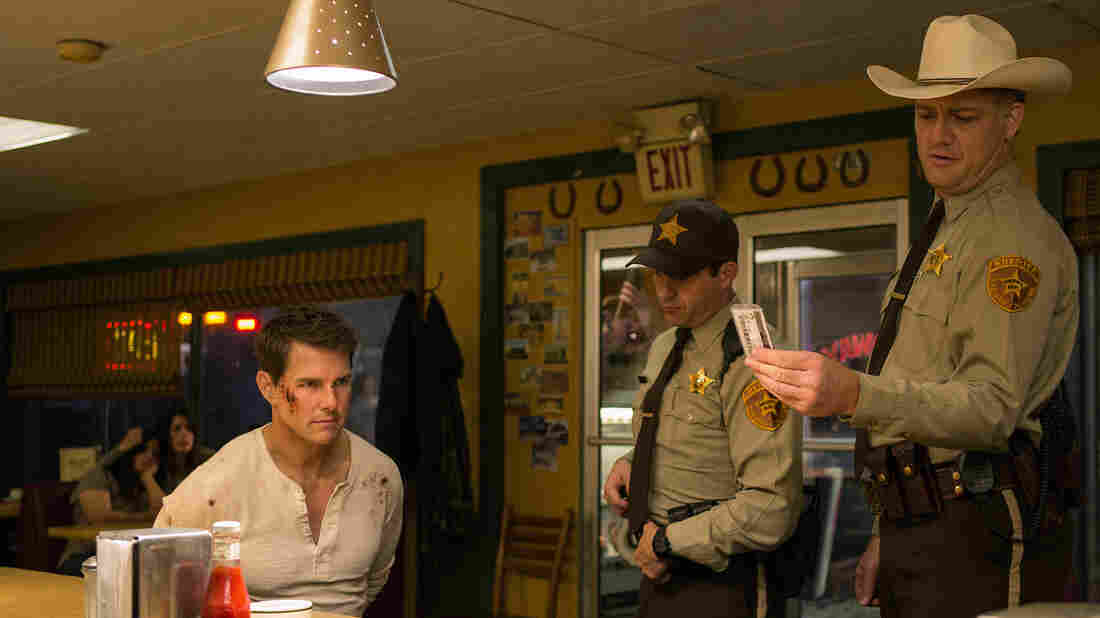 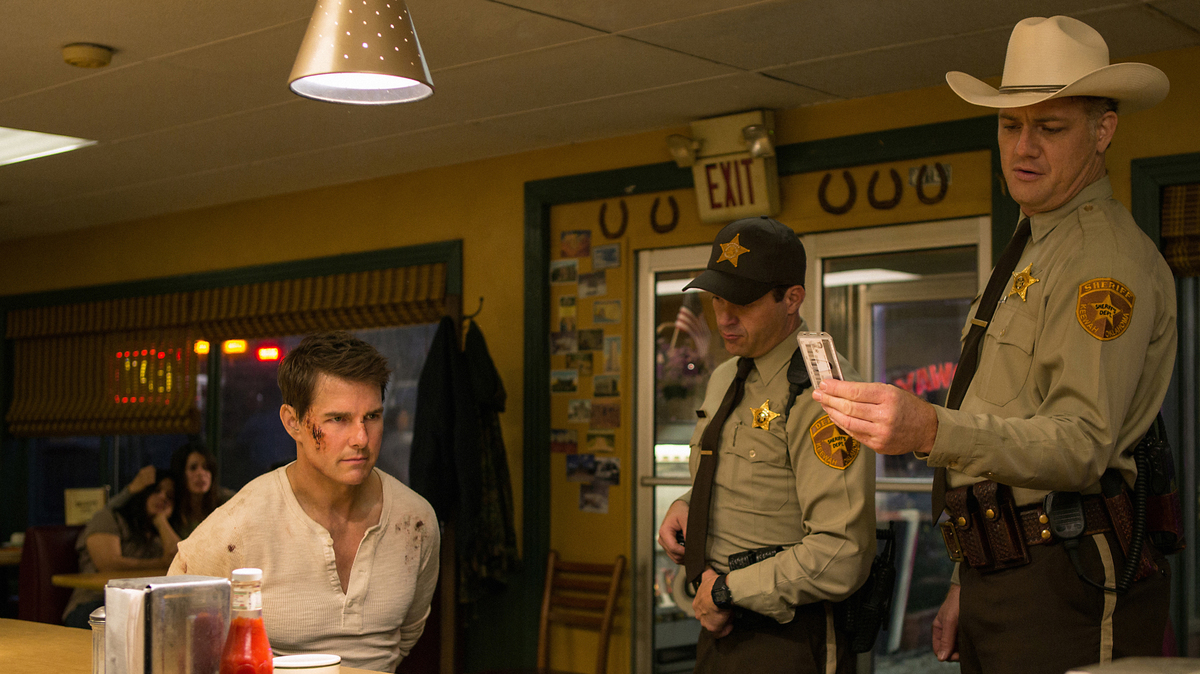 There are 21 novels in British author Lee Child's ongoing Jack Reacher series and they habitually take care to describe their hero as a blond-haired, blue-eyed hulk of an itinerant ex-Army cop, standing 6'5" with a 50-inch chest. Dolph Lundgren might've been perfect for the part, or maybe Anita Ekberg. But producer Tom Cruise was the guy who, after attempts by others, got the Reacher movie franchise going. For the starring role, there was only one name on his list.

It was an inspired choice, frankly. Cruise's mid-career pivot from thrice-Oscar-nominated all-rounder to full-time action star may have been motivated by PR problems and an increasing reliance on international box office, but that doesn't mean he isn't The Best There Is at What He Does. The same unblinking intensity that now makes him impossible to accept playing ordinary, emotionally stable human beings makes him perfect for movies that require him to scale Arabian skyscrapers and cling to the sides of airplanes. And the greatest runner in cinema history has been on an admirable run, what with the latter two Missions: Impossible, Jack Reacher, and Edge of Tomorrow all in the last five years, each a standout specimen of its genre.

Key to all those movies was Christopher McQuarrie, who wrote and directed Reacher and Mission: Impossible — Rogue Nation and script-doctored the other two. The presence of a guiding intelligence like McQuarrie howls into the fast-and-furious winds that writing matters, even in action flicks.

It's because of "McQ" that 2012's (barely) franchise-launching Jack Reacher was a gem. It had an enveloping mystery plot, strong location shooting (it was shot in Pittsburgh, and it never looks like it was made in Culver City or Toronto), and a cruel sense of humor. Cruise played the title character as a know-it-all jerk with an infallible memory, which oddly made him more relatable than he's when trying to interface casually with fellow humans. Reacher's two superb fight scenes, captured in medium shots rather than choppy close-cuts so you could see how hard Cruise trained, were brutal, but also nicely executed bits of slapstick. And its climactic gunfight was the best one since the bank-heist set piece in Heat. (Reacher, naturally, brought a knife.)

Oh, and the movie's final boss, The Zec, was played by Werner Herzog.

Alas, Cruise has retained McQuarrie's services for a rush-ordered sixth Mission, which means that for the lower-profile Reacher follow-up, Never Go Back (they really need to work on the titles of these movies), he had to get who he could. That was Glory director Edward Zwick, an old pro who made The Last Samurai with Cruise. The script is by Zwick, his longtime collaborator Marshall Herskovitz (they created ABC's thirtysomething together, thirty-something years ago), and tough-guy specialist Richard Wenk, whose name was on The Equalizer and the The Magnificent Seven remake.

It's a lousy trade.

Never Go Back is deeply mediocre, as rote and indistinct as most of the action flicks that've marked Liam Neeson's late-career lull. The offbeat jokes are gone, as is the coterie of interesting character actors and the clean, precise stunt work. There're more chases and fights this time, but they're all underlit and overcut, with none of the snap and polish that McQ and editor Kevin Stitt brought to these confrontations. Never Go Back's stunt coordinator, Wade Eastwood, also worked on the marvelous Rogue Nation, so the fault must lie with Zwick. (Surely it can't lie with editor Billy Weber, whose credits include Top Gun and The Tree of Life!)

The plot has do with the Reacher drifting his way east to meet Major Susan Turner, commander of his old unit, the 110th Military Police. (They've had a long flirtation-by-payphone—Reacher, like Machete, don't text, or own a cell phone.) He arrives to find her under arrest for treason—and himself accused of being the deadbeat dad of a 15-year-old (Danika Yarosh). Pretty soon he's breaking Turner out of the brig and they're lamming it with Reacher's maybe-kid, trying to avoid the hilariously conspicuous military contractors who want them dead. It's awful thoughtful of these trained covert operatives to dress like Eastern European gangsters, making them much easier to spot in a downtown DC crowd.

DC does not appear to have been allowed to play itself in many scenes, but New Orleans was. That's the site of the Halloween-parade climax that might've been cribbed from any of at least three James Bond flicks, from Thunderball 51 years ago to Spectre last November. The problem isn't that it's familiar. It's that the execution this time is lazy as hell.

One bright spot: Cobie Smulders. She gets more to do in this movie as Maj. Turner than she has in a half-dozen Marvel-universe appearances as a S.H.I.E.L.D. Agent Maria Hill: Running, kicking ass, showing Yarosh how to disarm someone holding a gun to her back, calling out Reacher on his sexist crap, running some more. As with Emily Blunt in Edge of Tomorrow and Rebecca Ferguson in Rogue Nation, the movie teases a romantic chemistry between Smulders and the 20-years-older Cruise, without daring to push things any further. (There actually was a kiss between Cruise and Rosamund Pike in Jack Reacher — one that McQuarrie and Cruise cut after test audiences balked!)

It makes sense, really. In the final moments of Never Go Back, after they've said their goodbyes, Yarosh runs at Cruise to wrap him in one last teary-eyed bear hug. He doesn't push her away. But he sure does look like he wishes she were the fuselage of an Airbus A400, 5,000 feet above the deck.

A previous version of this story mistakenly referred to S.H.I.E.L.D. Agent Maria Hill as Mariah Hill.