Accessibility links
Charlotte Holmes Is On The Case In 'A Study In Scarlet Women' Sherry Thomas' new novel presents a gender-flipped Sherlock Holmes tale, with a heroine who must battle not only the bad guys but also the Victorian era's unfair restrictions on women's lives. 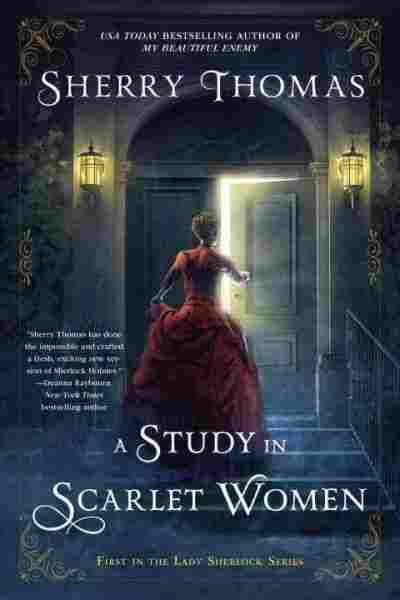 A Study in Scarlet Women

Your reaction to the following words will probably determine whether this book is for you. If your heart speeds up and you find yourself making grabby hands at the screen, maybe hopping in your chair muttering, "Give it to me now," I'm happy to tell you this book is available and worth your time to read once, possibly twice.

Here are the words in question: "Gender-flipped Sherlock Holmes."

Still here? Excellent. You want to read this book. You want to reserve at least a few hours of uninterrupted time — a rare thing, I know — to read it. You'll probably finish it, and start the first page over again, because it's that good.

Gender flipping Sherlock Holmes or any of his associates is not a new concept. Countless pieces of fan fiction and derivative works cast Sherlock, Watson, or both as women, and recent television reboots have also changed character gender. Thomas' Sherlock — who is better known as Charlotte Holmes — is a unique version in a number of ways, and a powerful point on which to refocus the world of the Sherlock Holmes mysteries.

The story opens with a murder, followed by a scandal. We see Charlotte through a narrowing spiral of observations from other characters: the mother of the man with whom Charlotte caused said scandal, the gentleman who wanted to stop her, and her sister, who isn't sure what to do now that Charlotte has been socially ruined. (The reference to "scarlet women" in the title isn't just a reference to the first Sherlock story. The concepts and boundaries inscribed by virtue, grace, class, and social status affect every character, especially Charlotte.)

You want to read this book. You want to reserve at least a few hours of uninterrupted time — a rare thing, I know — to read it.

Recasting Sherlock as Charlotte, and surrounding her with essential characters also recast as women, introduces a new tension to the mystery. Doyle's Sherlock Holmes suffered from many a tragic flaw — hubris and the awful, weighty burden of his terrible genius among them, poor thing. Charlotte's flaw — among others — is her gender, and more specifically, the constraints and limitations placed upon her because of it.

A female Sherlock doesn't have the luxury of rejecting society or even rejecting conversation. She's expected to know what to say, how to behave, and how to smoothly move from one topic to the next, even when she's baffled about why she should have to speak in the first place.

As Charlotte and her sister navigate society and learn about the acrimonious and unappealing state of their parents' marriage and finances, Charlotte decides she's had enough of society's expectations:

I do not like the idea of bartering the use of my reproductive system for a man's support — not in the absence of other choices.

Alas, she doesn't have many choices available to her. She can solve puzzles instantly, identify many intimate details about a person at a glance, and serve as a secret consultant to the Metropolitan Police. But without the protection of her status, she can't adequately care for herself.

Charlotte also has an altruistic motivation: She wants to save herself and protect her sisters from a society whose rules haven't and wouldn't protect them, and from parents who won't do so either. That mission moves alongside the investigation, and the ways in which those two stories intertwine reveal how precarious life is for women in Charlotte's world, and how many social rules are coded to be read and understood by some, but not all. Mysteries involving layered puzzles and clues hidden in a handful of words make for addictive reading, but the added impact of Charlotte's bid for autonomy, and the painful parallels to women's lives right now, made this book very difficult to put down.

There are some weak moments: The men in Charlotte's life are prone to sweeping in to help in ways that sometimes undermine her as a character. And the tension between Charlotte's crime — solving brilliance and her comparative ignorance of the real world can occasionally slow the plot. Fortunately, that deceleration does not last long, and the twists in the resolution reveal themselves as deliberately as Charlotte herself is revealed in the beginning.

Fortunately or unfortunately, depending on your reading preferences, this is the first in a series. Larger villains, potential conflicts, and long-term associations begin towards the end, so I want the next book to have arrived yesterday. In the meantime, Thomas's use of language, the way she uses gender reversal to conceal revelations, and the intricacies of her plotting mean that I will rediscover more things to relish in A Study in Scarlet Women each time I reread it.

If you're standing between me and my copy, you should probably move out of the way.

Sarah Wendell is one of the founders of Smart Bitches, Trashy Books, and the author of Everything I Know About Love, I Learned From Romance Novels.