Accessibility links
Voters With Disabilities Fight For More Accessible Polling Places More than 35 million eligible voters in the U.S. have a disability. And in the last presidential election, almost a third of voters with disabilities reported having trouble casting their ballots. 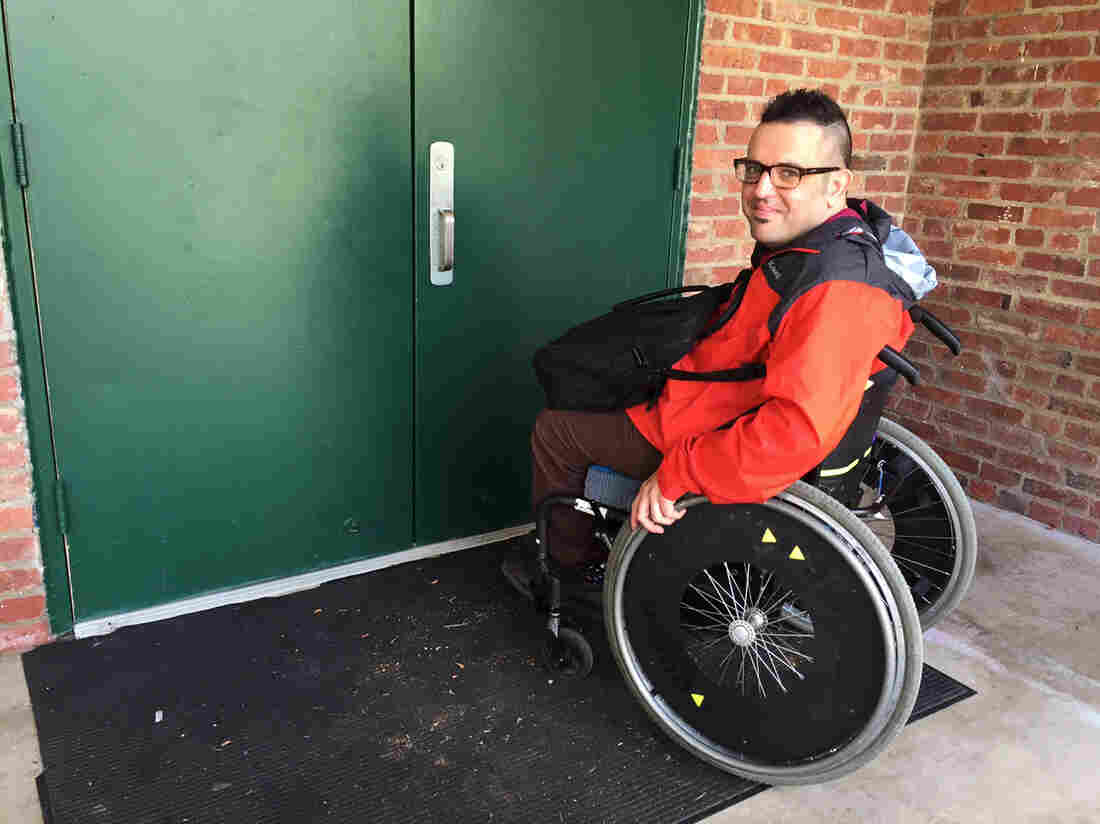 Ian Watlington, with the National Disability Rights Network, pauses at the doorway of a Washington, D.C., recreation center used as a polling place. He says the door, which has a stationary bar down the middle, would be too narrow for him to enter if he was in his motorized wheelchair. He can barely get through in his manual chair. Pam Fessler/NPR hide caption 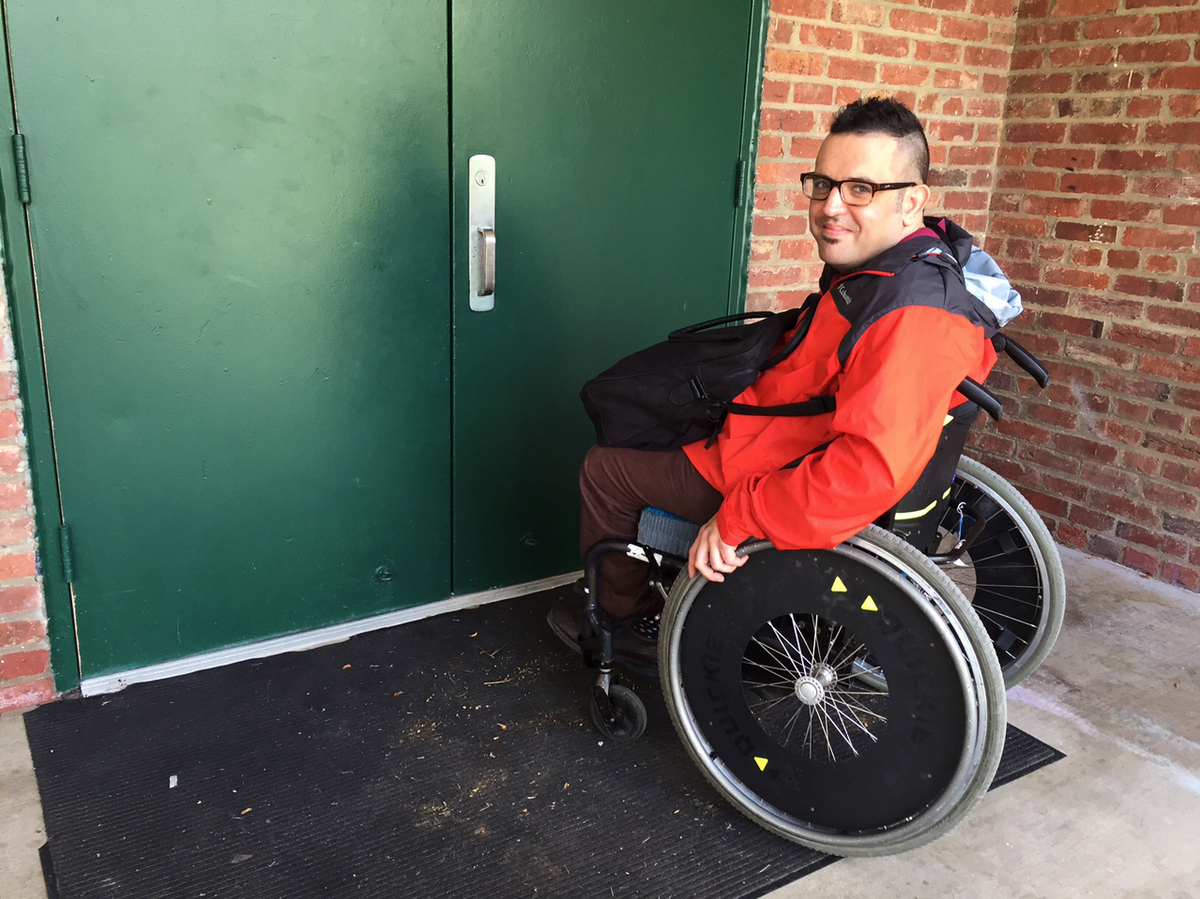 Ian Watlington, with the National Disability Rights Network, pauses at the doorway of a Washington, D.C., recreation center used as a polling place. He says the door, which has a stationary bar down the middle, would be too narrow for him to enter if he was in his motorized wheelchair. He can barely get through in his manual chair.

More than 35 million eligible voters in the U.S. — about one in six — have a disability. And in the last presidential election, almost a third of voters with disabilities reported having trouble casting their ballots — whether it was getting into the polling place, reading the ballot, or struggling with a machine.

Despite some improvements, many of these voters are expected to face similar problems again this year.

Ian Watlington, of the National Disability Rights Network (NDRN), demonstrates why. He has cerebral palsy and needs to use a wheelchair to get up a long concrete ramp outside a church in Washington, D.C.

"It is one of those ramps that everybody thinks is absolutely perfect," he says.

But as he struggles to get up it, it's clear that it's not perfect. Watlington says the slope is fairly steep, which means some people in wheelchairs could tip backward. At the top, he finds another problem.

"Right when you turn to get into the main door, you have a pretty substantial crack in the concrete. One that most people would have to bump over," Watlington says as he bounces his chair over the crack. He then has to make a sharp pivot to get to the door.

This church was used as a polling site in this year's primary, and the ramp was one of many potential obstacles cited in a report by a group called Disability Rights DC. Elsewhere, the group found locked doors, broken elevators and obstructed pathways — barriers not uncommon at polling sites across the country.

"If your polling place is somewhere that you can't even get in, not only do you sometimes feel like your vote may not matter. But it also feels like people don't want you to vote, or don't care if you can," says Michelle Bishop, a voting rights specialist at NDRN.

Bishop says millions of Americans who have disabilities are routinely discouraged from voting, not only by obstacles outside the polls, but inside as well — paper ballots that are hard to mark, long lines, even poll workers who question their eligibility.

"Based on some type of old stereotype and outdated prejudice that people with disabilities aren't intelligent enough to vote," Bishop says.

Terrica Jennings is sympathetic. She is the Americans with Disabilities Act coordinator with the D.C. Board of Elections. Jennings says the city has been working very hard to make sure that all of its voting places are accessible. 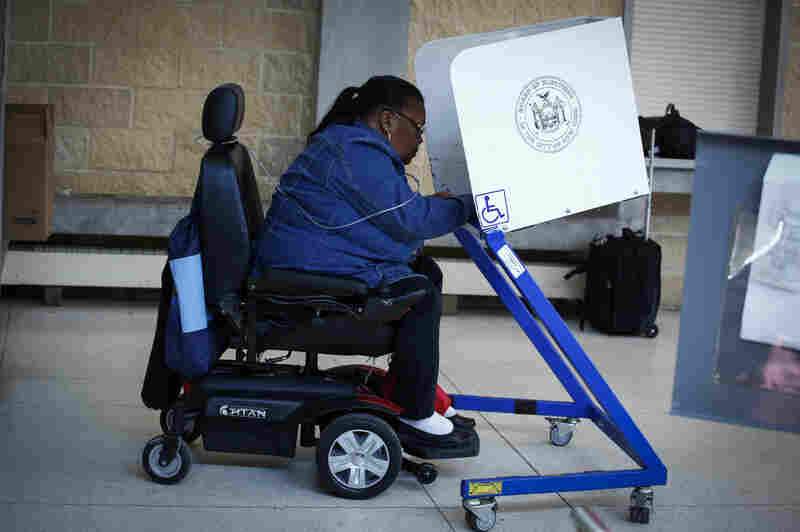 A woman casts her vote at a polling station in Brooklyn in the New York state presidential primary on April 19. Kena Betancur/AFP/Getty Images hide caption 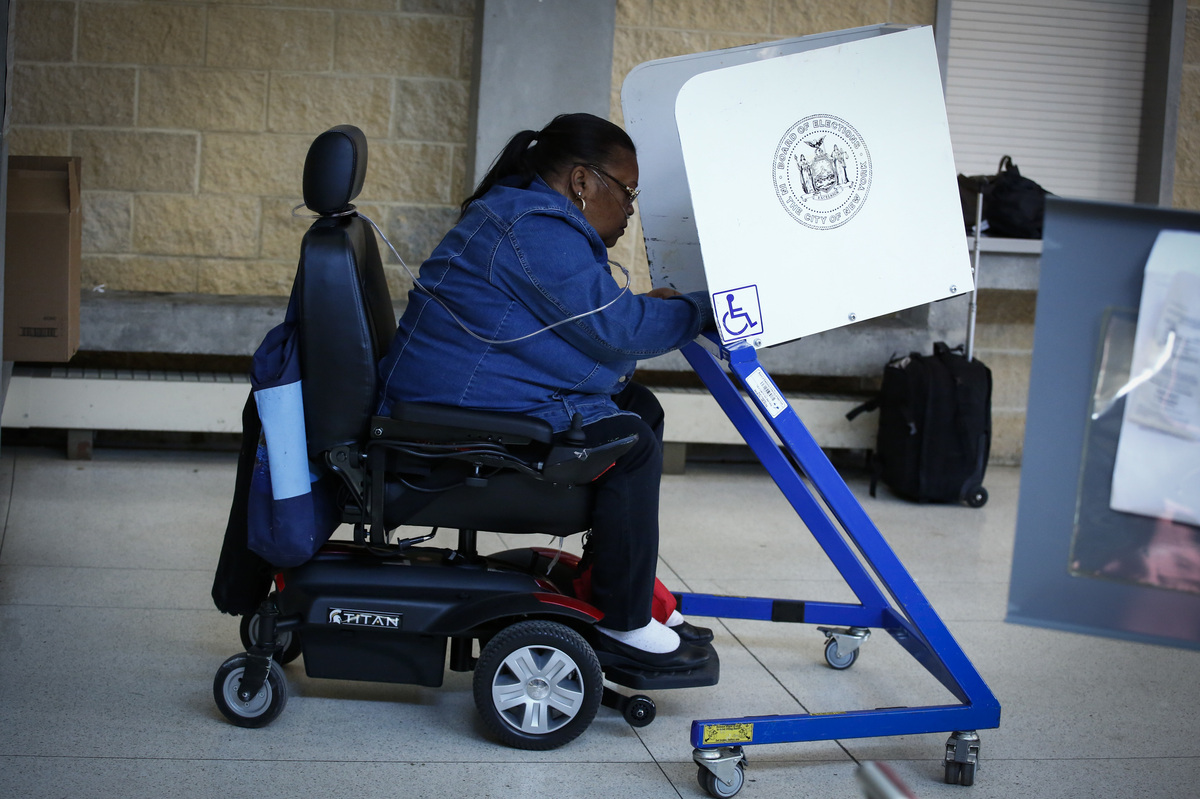 A woman casts her vote at a polling station in Brooklyn in the New York state presidential primary on April 19.

It has acquired new voting machines that are adjustable to accommodate residents using wheelchairs. The machines also have instructions in Braille and attachments, like sip and puff tubes and control pads, to help voters cast their ballots.

Jennings says every precinct also has workers whose sole job is to help elderly voters and those with disabilities. The District offers curbside voting at every site for those who can't get inside.

Still, she acknowledges that in heavily populated cities like Washington not every polling place can be ideal.

"You don't necessarily have facilities that are sprawling, that have huge parking lots, that have all the features that would just make it really easy for any voter to get into," she says.

Finding accessible sites is a challenge for election officials across the country, who often have to rely on churches, schools and even homes to make sure there are enough polling places for voters on Election Day. The U.S. Government Accountability Office found that in 2008 only 1 in 4 polling places was completely accessible — an improvement over 2000, but still far short of the complete accessibility required by federal law.

Lisa Schur, a professor at the Rutgers School of Management and Labor Relations, says the result is that Americans with disabilities vote at a lower rate than everyone else. She estimates that if they had voted at the same rate in 2012, some 3 million more voters with disabilities would have participated.

Poll Workers Are Hoping For Calm But Preparing For The Worst

"I think it's been a lack of attention to these problems and frankly also fixing some of them costs money, and, you know, that's always an issue," says Schur. But she says money doesn't have to be an obstacle. "The solutions can be as simple as moving garbage cans to make sure that they're not blocking people who are using wheelchairs when they're trying to get in the door. Or making sure that there are chairs there for people who really can't stand in lines for very long," she adds.

And most election offices have been trying to fix the problem — including providing more training for poll workers on how to deal with voters who have disabilities. The issue has taken on more urgency, because the challenges are expected to grow as the population ages.

One solution has been to allow more voting by mail. But Schur says that still poses a problem for some voters, like those who are blind, and that in surveys, Americans with disabilities say they'd prefer to have the option to vote in person, like everyone else.