Accessibility links
'The Walking Dead' Gets Real In Season 7 Premiere They finally did it: The producers of The Walking Dead kicked off season seven by ratcheting up the onscreen gore and brutality until it matches what appears in the original comic.

'The Walking Dead' Gets Real In Season 7 Premiere

'The Walking Dead' Gets Real In Season 7 Premiere 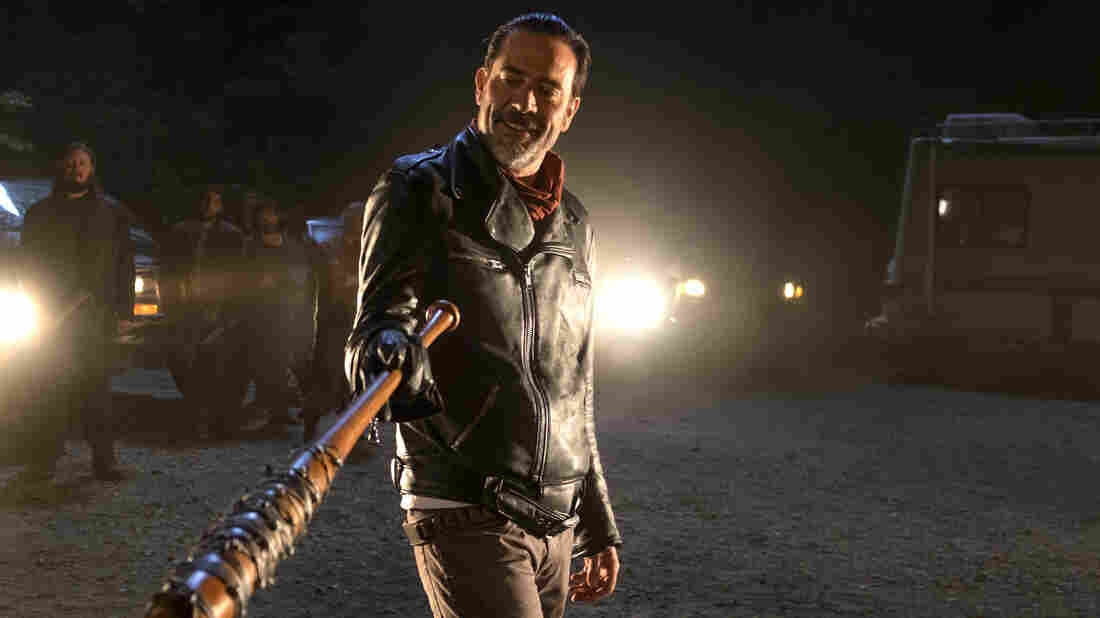 The introduction of Jeffrey Dean Morgan as the villainous Negan takes The Walking Dead in a new direction. Gene Page/AMC hide caption 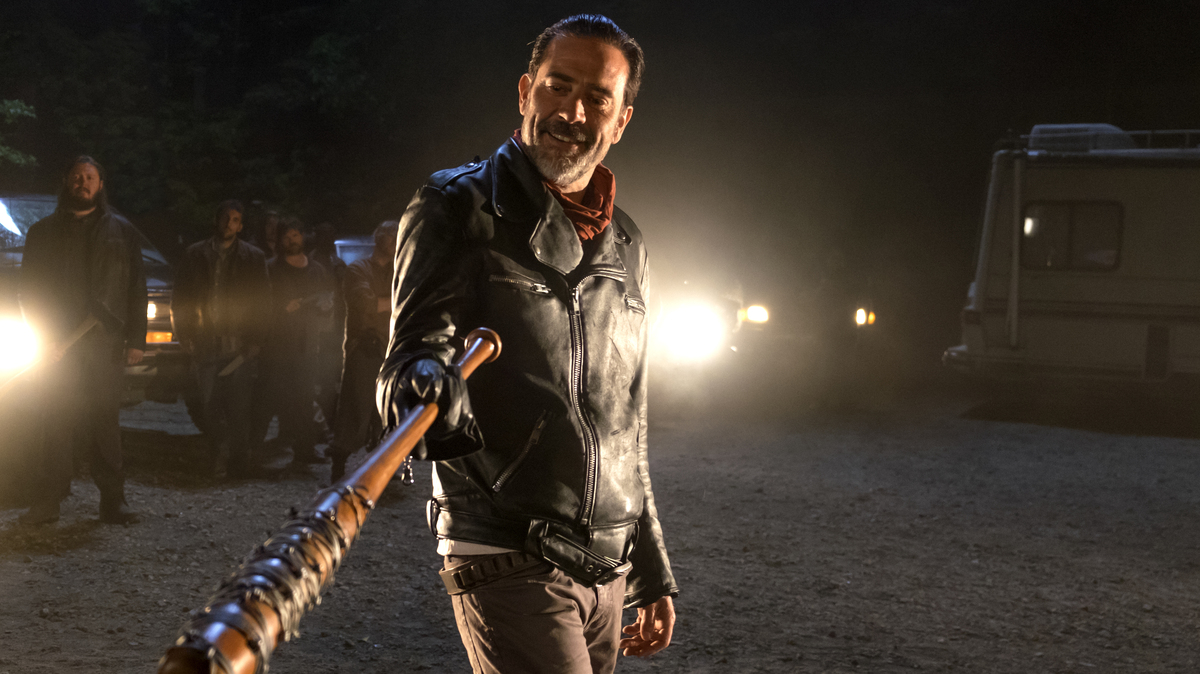 The introduction of Jeffrey Dean Morgan as the villainous Negan takes The Walking Dead in a new direction.

(It should almost go without saying; there are going to be some serious spoilers in this piece about Sunday's pivotal, bruising episode of The Walking Dead.)

They finally did it.

I'm not talking about the decision by producers of The Walking Dead to kill two important characters in Sunday's gut-wrenching episode. Fans knew since the cliffhanger ending of season six back in April that super-psycho bad guy Negan was going to beat someone they cared about to death with his barbed wire-covered bat, Lucille.

For those who aren't quite up to speed with The Walking Dead's recent storylines, hero Rick Grimes and his ragtag band of zombie apocalypse survivors were taken captive by a loquacious guy named Negan who decided he had to make the group pay for killing several of his men. But even though fans saw Negan swing the bat last season, we didn't see who got hit until well into Sunday's episode.

The fact that producers made it look Sunday as if suddenly humanized ex-soldier Abraham was the only one who would die — before also brutally recreating the murder of fan favorite Glenn Rhee from the Walking Dead graphic novel — only confirms two things. The show's creative team has not lost its taste for jerking fans of the TV show around and it remains committed to refining and retuning the biggest moments from the book, without jettisoning them completely.

Until now, the TV series — as awful as it could be — was never as stone cold as creator Robert Kirkman's source material. In Kirkman's ongoing Walking Dead graphic novel, Rick's son Carl kills his dad's best friend Shane early in the story. On TV, that didn't happen until the end of season two.

In the comic, Rick loses a hand to the story's first Big Bad, the Governor, who also imprisons and sexually assaults sword-wielding heroine Michonne multiple times. In the books, Carl also kills another child who had mutilated his own brother with a hunting knife, sparing the adults the question of what to do with a kid who was so unpredictably dangerous.

To me, it always seemed that TV's version of the Walking Dead was liberal with slicing up the undead — can't imagine their budget for chicken parts and red food coloring — but a little more careful about the moments when fully human characters bought the big one, especially at the hands of other people.

No more. Jeffrey Dean Morgan's Negan is as bloodthirsty, ruthless and manipulative as the comic book version. He kills Glenn in retribution for another character, Daryl, losing his cool and punching him. Negan hits Glenn once, disfiguring his face, allowing the character to promise his pregnant wife he'll see her in the afterlife, before using Lucille to turn his head into a bloody paste, as his body keeps twitching.

There was a method to Negan's madness. He was trying to break Rick Grimes; ensure that the most confident, deadly individual among the show's hardy band of survivors never thinks about challenging his rule.

For producers, there was also an objective. After six seasons, The Walking Dead is badly in need of a new focus. The show's main characters have faced every challenge you can imagine, and many storylines in the last season seemed stale as a zombie "walker" trapped in an attic for a few years.

In the graphic novel, Negan's appearance heralds the discovery of several other communities where other survivors live. Some of those communities yield characters who provide a wealth of new storylines, taking some of the burden off the few original characters left.

In the graphic novel, Negan's appearance heralds the discovery of several other communities ... who provide a wealth of new storylines, taking some of the burden off the few original characters left. Producers seem to be trying a similar turn on TV.

Producers seem to be trying a similar turn on TV, using the debut of a charismatic, pathological bad guy to press the reset button for a series which remains television's most popular show for the young viewers advertisers crave.

Fans learned just how much producers were willing to jerk them around last year, when the show featured a sequence where it looked as if Glenn was torn apart by a horde of walkers. It was revealed several episodes later that another guy who fell into the crowd with Glenn was the one actually ripped to shreds.

In a way, it was a diabolically savvy move. All the think pieces about losing one of the few Asian male romantic leads on TV got written back then, allowing Glenn fans to carp and protest and drain their energy so when his death actually came Sunday, it might not spark as much outrage.

The actor who plays Glenn, Steven Yeun, was careful to say he wanted the death scene Sunday during an appearance on the aftershow Talking Dead, recalling that he told Kirkman, "Don't give that [scene] to anyone else.".

Also, given how upset some fans got at the head-fake of Glenn's not-death, I truly doubted producers would court disaster again by actually killing him. Which made it a little more surprising when they actually did.

Fittingly, as the show's top producers and cast gathered at the Hollywood Forever Cemetery Sunday for an expanded live edition of Talking Dead, the skies opened up and a pouring rain drenched all the participants.

There's a lot riding on this new direction and the hope that fans can look past their trauma to stay engaged.

Despite the fact that hundreds of fans were gathered to watch the show, the mood was somber and awkward, as the stars and producers tried to put the best face on an episode which had just deeply traumatized its biggest supporters.

"We just wanted to send a clear message that we are just getting started (telling stories)," said Kirkman during the Talking Dead episode; he didn't mention it then, but the show has already been picked up for its eighth season by AMC.

So there's a lot riding on this new direction and the hope that fans can look past their trauma to stay engaged.

Like so many moments in Walking Dead's past, it's a bit of a gamble — counting on the devotion of the show's followers to survive the kind of beating that only comes after the loss of a truly admired character.