Accessibility links
Lots Of Christians Support Trump. Why Are Mormons Skeptical? White evangelicals are some of Donald Trump's strongest backers. But another reliably Republican group of Christians — Mormons — is leery of the GOP candidate. Here's why. 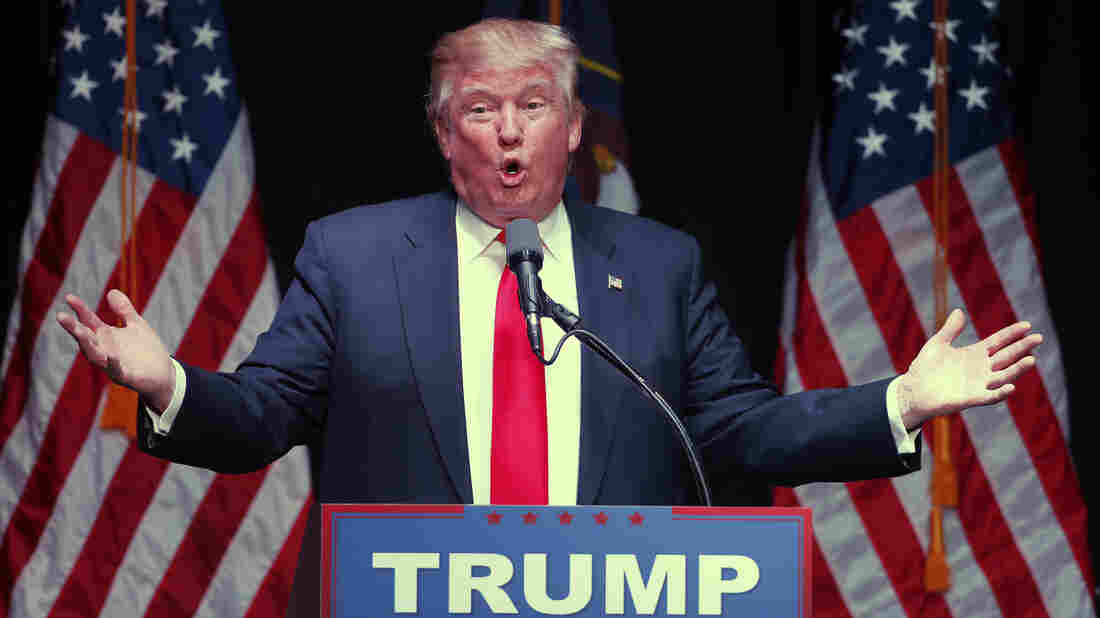 Donald Trump, shown speaking at a March rally in Salt Lake City, ended up losing the GOP caucus there — badly. Now, there's a real chance he could lose in November in the deep-red state. George Frey/Getty Images hide caption 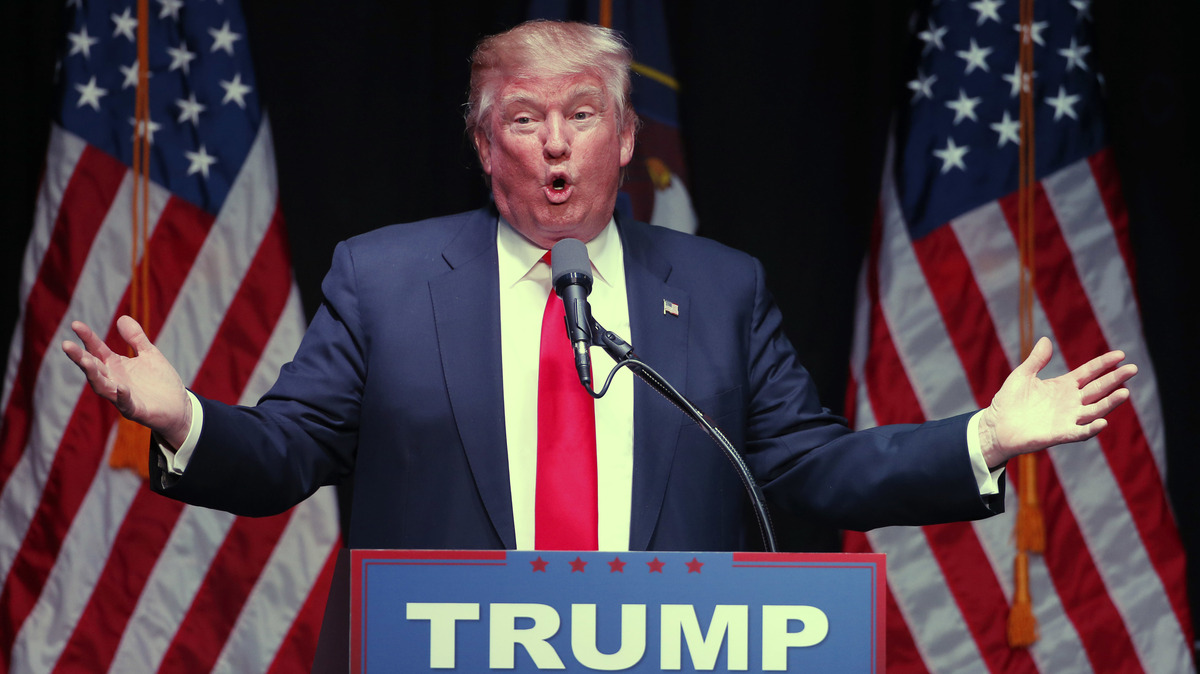 Donald Trump, shown speaking at a March rally in Salt Lake City, ended up losing the GOP caucus there — badly. Now, there's a real chance he could lose in November in the deep-red state.

"There isn't a simple answer when it comes to Mormons and Trump," Stephanie Fowers said. "We are so torn right now that hardly anyone I know will even mention his name anymore because it's too depressing."

That makes her just another disenchanted voter in the endless slog that is Campaign 2016. Fowers, a writer from Cottonwood Heights, Utah — and a Mormon — said that among the Mormons she knows, she sees a lot of indecision.

"Some of us might pull the lever for Trump, because we don't like Hillary," both when it comes to her policies and her potential Supreme Court picks, Fowers told NPR. Because she lives in Utah, she has another option: Evan McMullin, an independent candidate, former House staffer and CIA operative, who is on the ballot in 11 states.

"Some of us might go McMullin, because we want to preserve the conservative movement (as we believe it to be), and we feel that Trump will damage it further if he becomes president," Fowers said. But, she added, "neither answer is fully satisfying. At all."

Stories abound of Mormons who likewise find themselves unable to support a candidate who has philandered, bragged about kissing and groping women and proposed keeping an entire religious group from immigrating to the U.S. 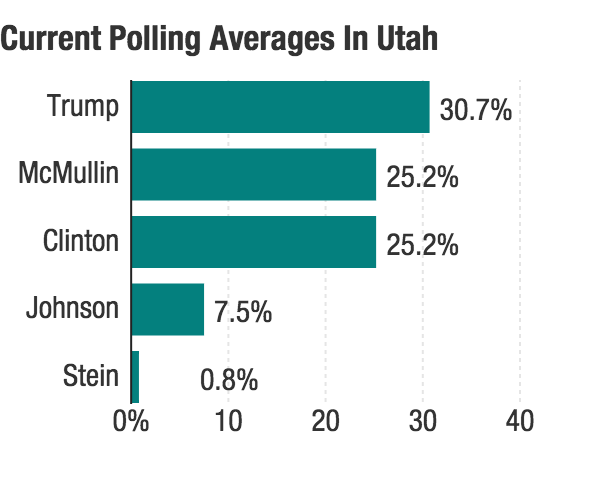 It's unheard-of for a Republican presidential candidate to be this close to losing in Utah. Danielle Kurtzleben/Real Clear Politics hide caption

As a result, Utah could very well not go Republican for the first time in more than 50 years. Trump's lead is slim in several recent polls, and in one, he's losing to McMullin. So why are Mormons bristling when other conservative Christians are sticking with Trump? There are a few reasons:

"Mormons as a group has deeply ingrained within their psyche that they are a religious minority that has experienced persecution in the not-distant past," said David Campbell, professor of political science at the University of Notre Dame and co-author of Seeking the Promised Land: Mormons and American Politics, pointing to the violence experienced by the Mormons in Missouri in the 1830s, culminating with an order from the governor that Mormons either leave the state or be exterminated.

Mormons hear Trump's harsh rhetoric against Muslims, and they hear echoes of the widespread persecution they once faced.

"The fact that Trump has proposed the religious test — whether he really meant that or not — the fact that it was out there and resonating within the electorate was definitely radioactive among Mormons," Campbell added.

Trump has made harsh rhetoric against immigrants a centerpiece of his campaign. And immigration just happens to be an area in which Mormons tend to be far more moderate than their fellow Republicans.

"Unlike [white] evangelicals, Mormons are actually quite moderate on the issue of immigration," Campbell said. "I wouldn't say they're liberal on immigration, but they're much more in favor of some sort of immigration reform. They're more sympathetic."

There are a number of reasons why this might be the case, as Campbell and co-authors Christopher Karpowitz and J. Quin Monson wrote in a chapter from Mormonism and American Politics (cited here by Religion News Service' Jana Riess). One theory is that "the high proportion of Mormons who serve as missionaries in other countries fosters an empathetic perspective on illegal immigrants." Particularly if the missionaries have served in places the immigrants are fleeing, they wrote, they understand why those people want to come to the U.S.

Another important reason: Latinos have been a tremendous area of growth for the church.

In 2014, a group of faith leaders, including Dieter Uchtdorf, second counselor in the First Presidency of The Church of Jesus Christ of Latter-day Saints, met with President Obama to talk about immigration. Afterward, Uchtdorf told the Deseret News that, while he doesn't agree with Obama on many issues, "We very much agree on immigration reform."

"Our principle, I declared to the president, is that we love our neighbor, which means we love all people, in all places and at all times," Uchtdorf said then. "One of the core values we stand for is families. The separation of families (in U.S. immigration policy) isn't helping."

"Mormons invest an incredible importance in the personal integrity, the character of a political leader," Campbell said. "And that's not to say evangelicals don't, but I think we're definitely seeing in this race, it must matter more to Mormons than evangelicals."

Fowers says she is struggling over this question.

"How do we find that balance of politics and morality — shouldn't they be the same thing?" she said. "I always thought they should be."

She knows for sure that she doesn't want Clinton in the White House, but she also can't back Trump enthusiastically — and she's not alone.

"The majority of people I've talked to have no idea what the right decision is," she said. "We want to follow our conscience, but don't know the best way to do that."

McMullin is Mormon, which could make him more attractive to his fellow Mormons, who may like to have the opportunity to support someone from their own church. It would be wrong to see this as the primary driving factor behind Utah Mormons' embrace of McMullin, Campbell said, but it could factor into it for some.

In addition, steady, staunch opposition to Trump by Mitt Romney may in the same way play into some Mormons' opinions.

Of course, no one's vote is driven entirely by one factor — people of any faith can take something other than religious dogma into account in the voting booth.

But that said, Mormons really do incorporate religion into their political choices more than most other Americans. "If you look across religious groups, Mormons are more likely to base their political decisions on their faith," Campbell said.

One recent poll found that that since just five years ago, many white Protestants (especially evangelicals) have grown much more tolerant of politicians with moral failings — potentially because of Trump himself.

That poll didn't include data on Mormons, but if Campbell is right, Mormons are less likely to make that kind of shift — meaning that many voters, like Fowers, could be agonizing even on Election Day about whom to choose.