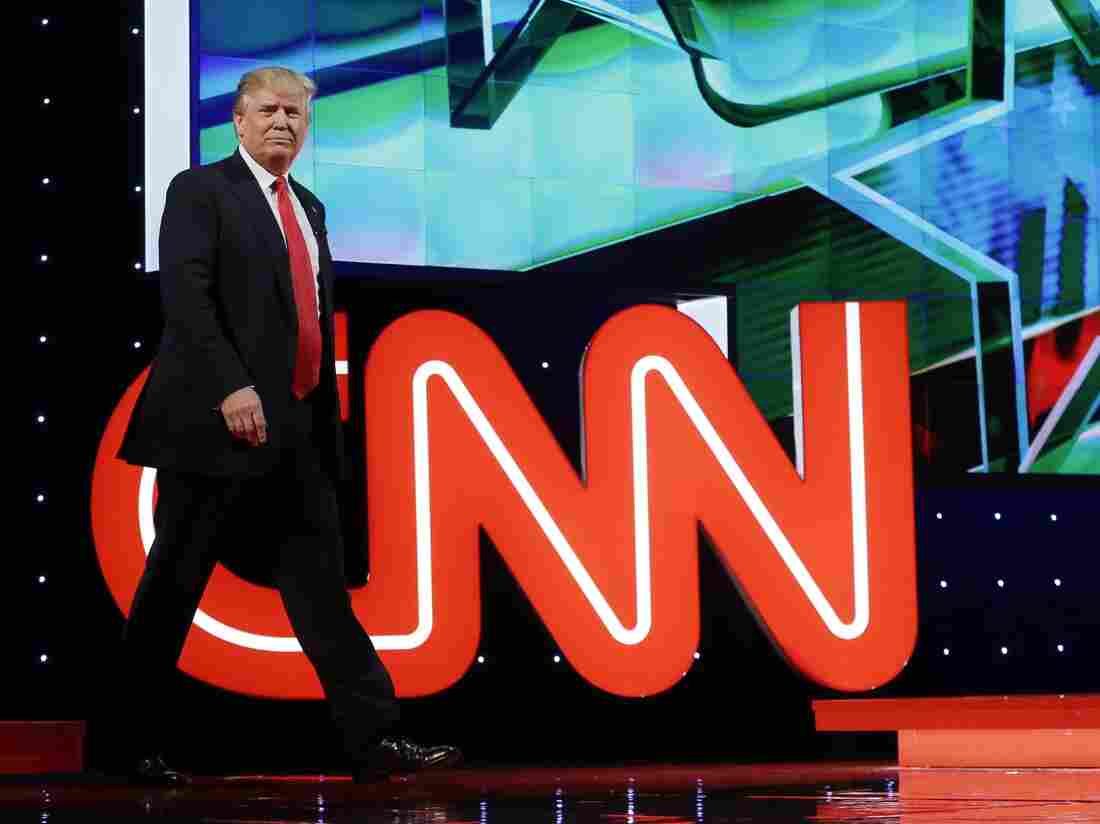 Donald Trump enters the debate hall during the Republican presidential debate co-sponsored by CNN in Coral Gables, Fla., in March. CNN is expected to see $100 million in extra revenues this year, thanks largely to its coverage of Trump. Alan Diaz/AP hide caption 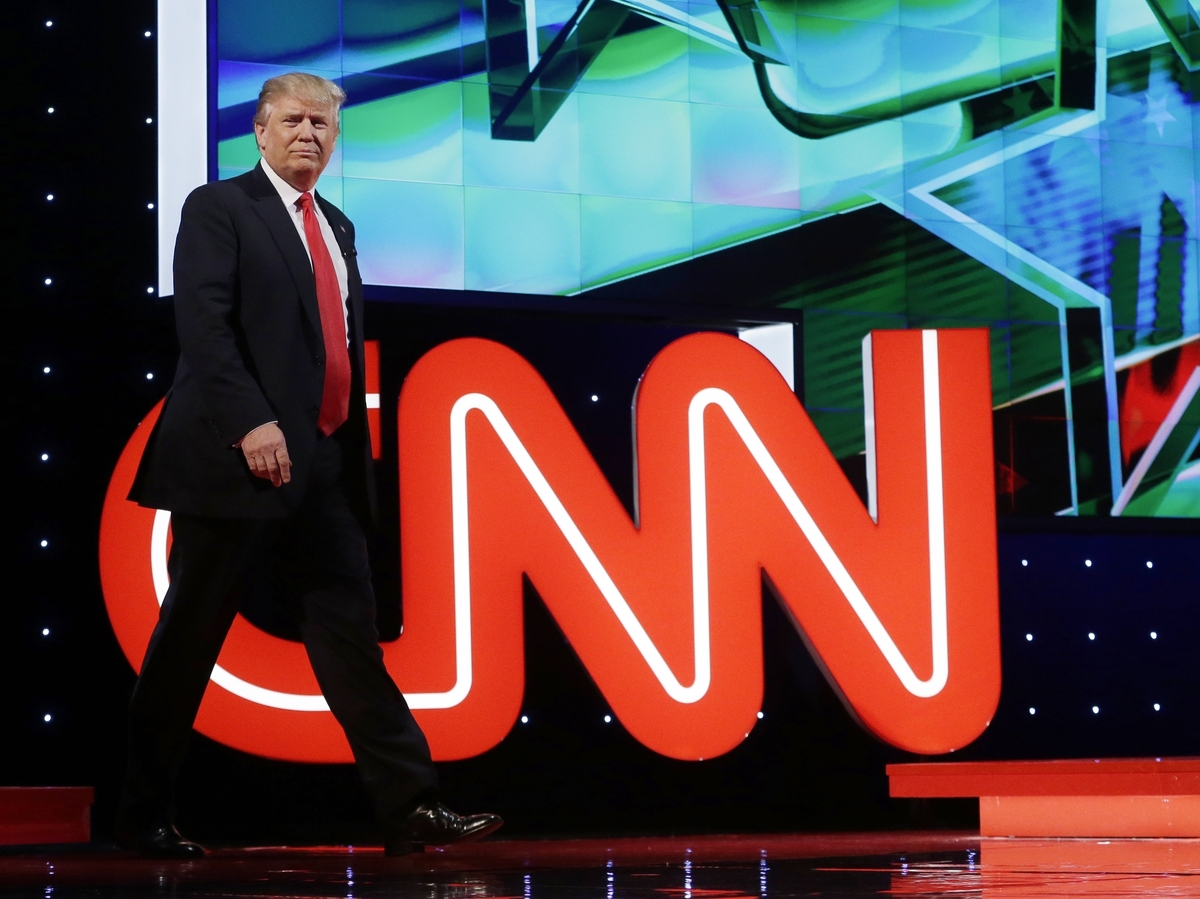 Donald Trump enters the debate hall during the Republican presidential debate co-sponsored by CNN in Coral Gables, Fla., in March. CNN is expected to see $100 million in extra revenues this year, thanks largely to its coverage of Trump.

AT&T's proposed $85.4 billion acquisition of Time Warner has cast renewed attention on the financial performance and journalistic independence of one of the media conglomerate's best-known possessions, CNN.

"You have to allow the organization to run independently," AT&T Chairman and CEO Randall Stephenson tells NPR. "It's not an altruistic thing either. I mean, I personally think it's a smart business thing to do. If the customer ever believes that the news is being tainted by the opinion of myself or somebody else within AT&T, that's brand damaging."

Internally, some hope CNN's financial performance will help ensure its independence and continued funding. The network has turned a financial corner thanks to the painstaking initiatives of its chief, Jeff Zucker, and to the unpredictable words of another man not employed by CNN: Donald Trump.

The AT&T-Time Warner Merger: What Are The Pros And Cons For Consumers?

Presidential election years always give a huge boost to all three major cable news channels. For CNN, this campaign cycle has been particularly good.

According to two people with detailed knowledge of the network's financial performance, CNN will make approximately $100 million in television and digital advertising revenues more than it would expect in the typical election year.

That's thanks to the huge interest in Trump, who seemingly received blanket coverage of every public pronouncement and rally during the extended Republican primary season.

The heightened level of viewers meant CNN could guarantee advertisers relatively high audiences — and lock in higher advance rates rather than simply take pride in an unexpected spike in ratings. CNN has also landed big-name sponsorships that were hard to get in the past.

"I think it's pretty obvious what made this year pop from an election cycle perspective," says Tracy Stallard, the senior director of media for Anheuser-Busch InBev's U.S. operations. "It's certainly been a fun one to watch."

AB InBev, the world's largest brewer, struck a sponsorship deal worth several million dollars to CNN. It included video vignettes — more than just a 30-second spot, Stallard says — that ran on CNN's television channel and digital platforms. But AB InBev's most famous labels, Budweiser and Bud Light, were sponsors of the CNN Grill, which served as both a television studio and an actual bar at the Republican and Democratic national conventions this past summer.

"CNN in particular was an exciting partner because of this 'on-the-ground' activation aspect," Stallard says. "They were like-minded to us. They didn't just believe they were going to sell us television ad placements." The sponsorship brought added visibility for political, corporate and journalistic big-shots at the conventions but also won periodic mentions on the air, she said.

To be very clear, Zucker, the president of CNN Worldwide, has pursued a strategy featuring multiple prongs in recent years.

He placed an emphasis on breaking news, leading initially to much-lampooned blanket coverage of a missing plane believed now to have crashed in the Indian Ocean and a sinking cruise liner off the Italian Coast, and the sense among some critics that the definition of what news is actually breaking has been stretched past recognition.

CNN has also spent more time reporting on conflict, disaster and politics from abroad than its cable news peers. Indeed, Zucker has authorized the hiring of waves of journalists to cover stories on the air and online, raiding Politico, the Los Angeles Times and other prominent news outlets.

Additionally, Zucker invested in outside documentaries and highly produced original taped series too, featuring such stars as Anthony Bourdain and Lisa Ling, as he sought to give viewers a recurring reason to tune in during prime time in the absence of big news.

And, Trump became a big reason to tune in starting more than a year ago.

"We recognized much earlier than most that there was a little bit of a phenomenon to Donald Trump," Zucker said to a group of students and faculty at Harvard University's Shorenstein Center earlier this month. "I'd say that if we made a mistake last year it's that we probably did put on too many of his campaign rallies in those early months unedited and just let them run."

Zucker declined to comment to NPR about the AT&T deal or CNN's performance.

Time Warner CEO Jeff Bewkes tells NPR that Zucker's strategy prior to the election cycle set the table for this year's financial gains, citing coverage of hard news abroad, and the documentaries and special taped series. "We were on this track without regard to the election," Bewkes says. "We have the biggest newsgathering organization in the world with, increasingly, the best expertise in how to serve it into [video on demand] offerings, mobile offers, short-form offerings."

CNN has been part of a repeating cycle of media synergy and spinoffs, cast into and out of a series of media conglomerates over recent decades that included a major movie studio, magazine company, music producer, cable provider, and book publisher, as well as CNN's sibling television networks.

"There is no corporate history at AT&T of journalism," Klein says. "They're more often in the news than the people who brought you Superman v Batman. And so these issues may come to a head more often. And the question will be: How will AT&T handle it when CNN becomes a burr in the saddle — even if inadvertently?"

Assuming the acquisition is approved by federal regulators, Bewkes is not expected to continue much past the transition of Time Warner from a free-standing corporation into a fully held subsidiary of AT&T. However, the Time Warner chief says he is confident the telecommunications company intends to keep CNN independent and viable.

Below are lightly edited excerpts of NPR's interview with AT&T's Stephenson and Time Warner's Bewkes.

On the viability and journalism of CNN 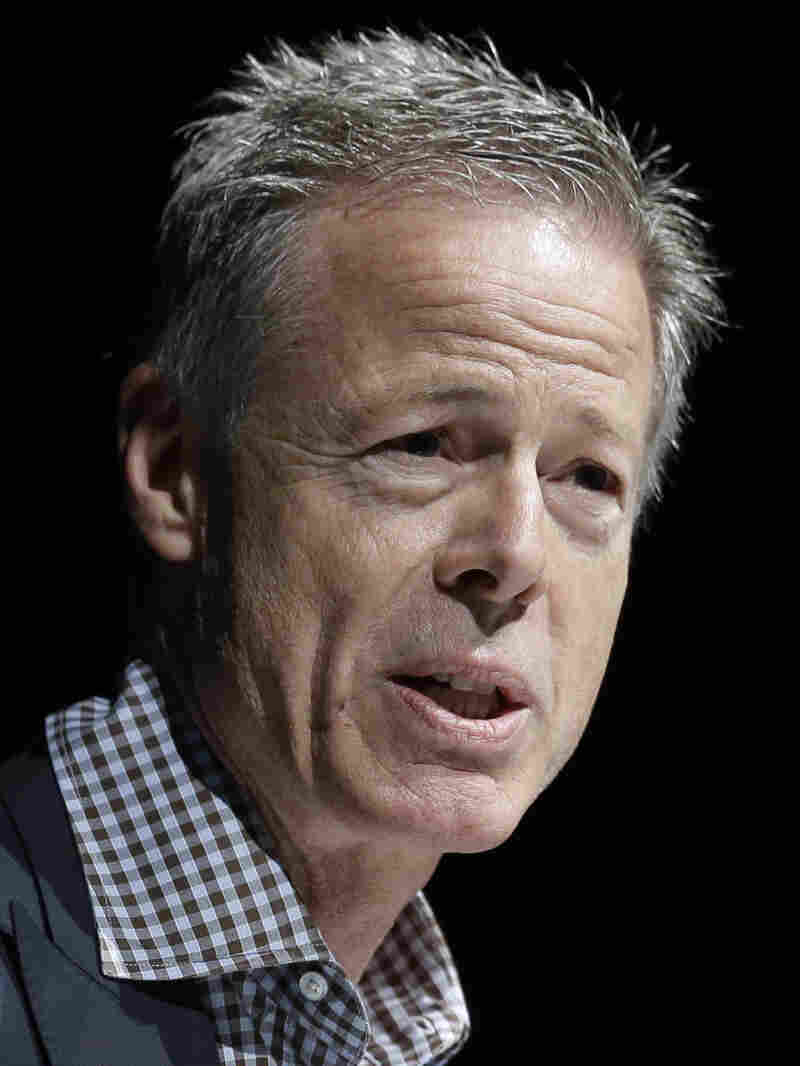 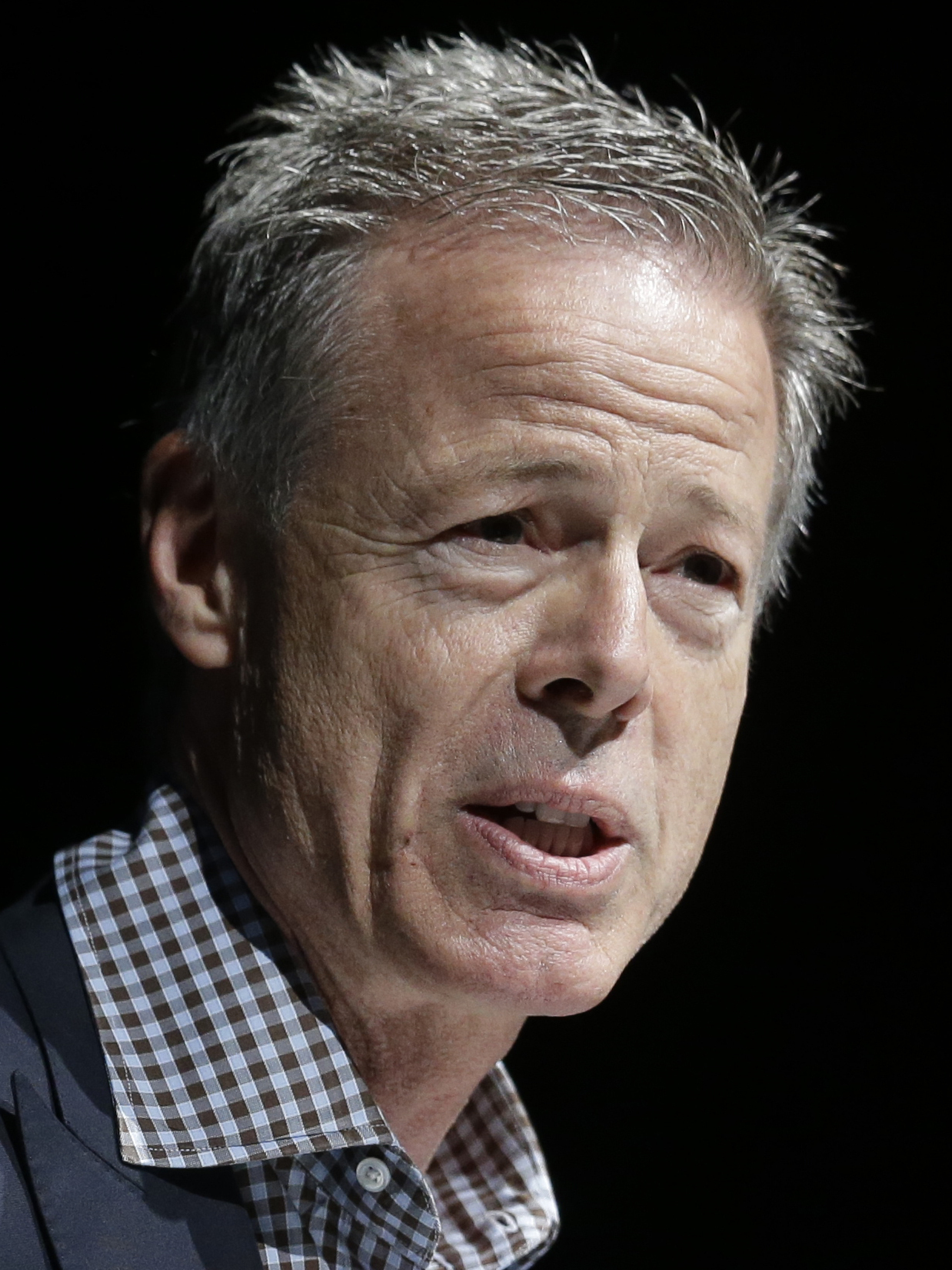 Bewkes: We feel strongly and have for decades ... about the news independence and the objectivity of CNN. ... Everyone argues and they should, as Americans, about whether the news coverage we're getting is biased. Is it independent? Is it objective? Is it fair to all sides and points of view? That's a challenge that you always have. There was a lot of controversy a few years back that you ought to pick a "political viewpoint" and have your news go that way. We never accepted that. We think our job is to cover all the viewpoints from all the sides. And we're open for criticism as to whether we've succeeded or failed in that. We do it every day. But independence for that is what our viewers come for at CNN and it's why we recruit the best journalists in the world. We know that that is the mission of CNN. And we know, and so does AT&T, that to in any way do anything other than support that would be a huge mistake. 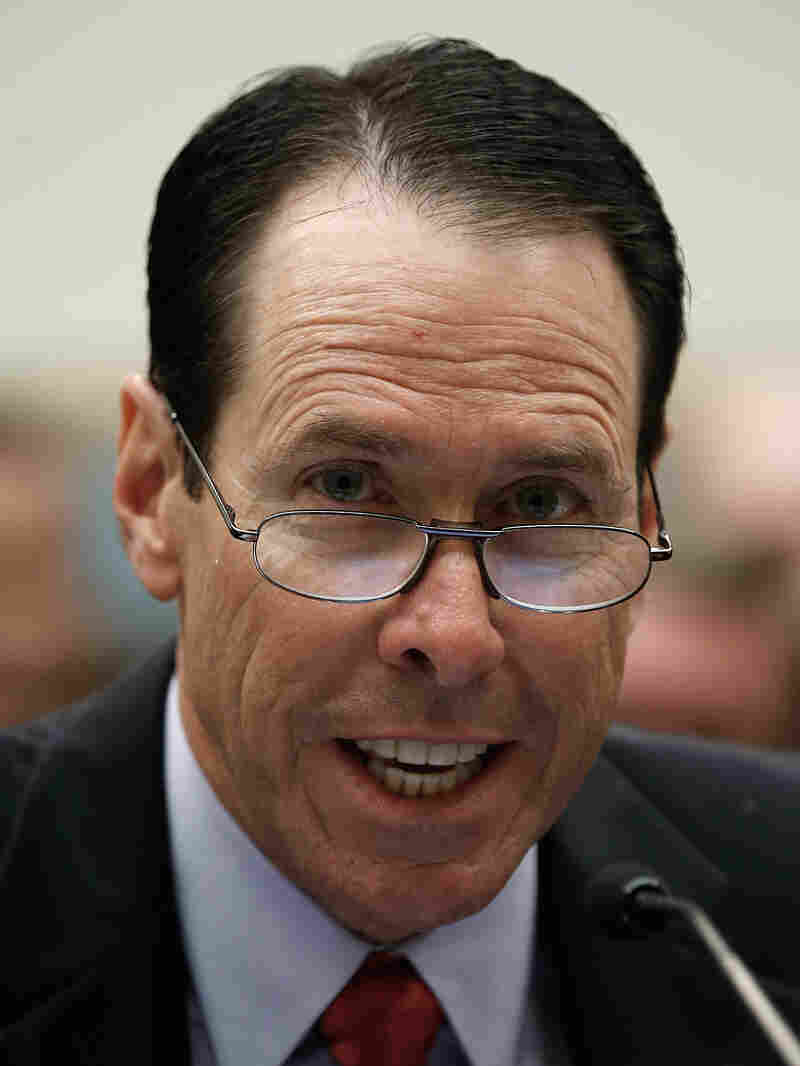 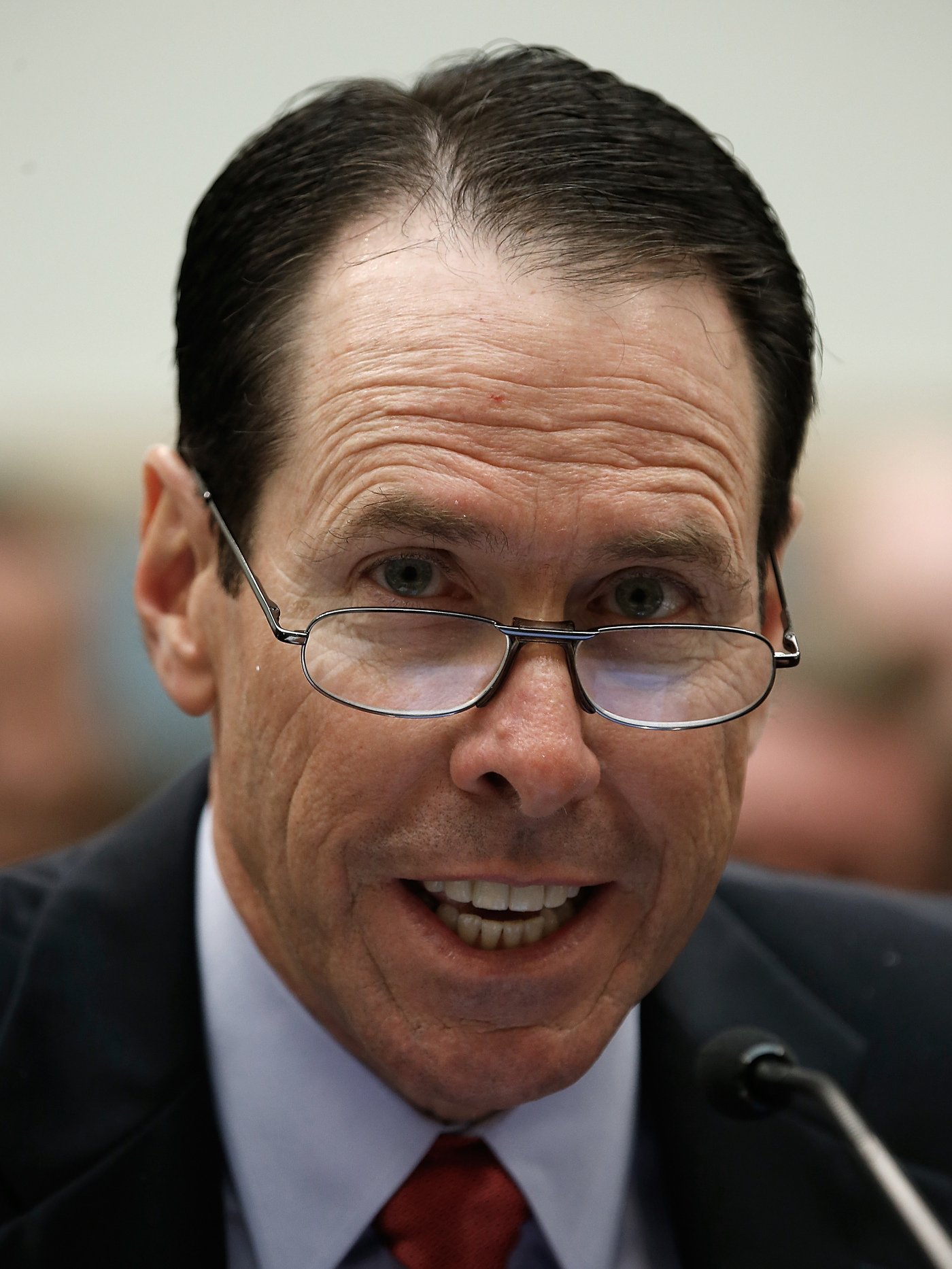 Bewkes: It'll increase competition, because it will make a more effective platform for advertising. And I think you should go ask ... all the advertisers whether they would welcome another strong competitor that can offer the kind of 21st century ad platform that Google and Facebook have that are taking the lion's share of the advertising.

On how the two companies describe the logic driving the deal

Stephenson: We have unquestionably the broadest distribution platform for video in the United States and even in Latin America. And our customers are demanding more and more premium content. And we have come to believe strongly that premium content always wins and is wanted in the living room where the TV set is. But that has also moved out to the mobile device and we have several million mobile customers who are demanding more and more premium content on their mobile devices. And they're not just asking for premium content on their mobile devices but they're wanting the content formatted differently, they're wanting it curated differently that is really established and set up for mobility. [The benefit of working as one company rather than as two partners] is a function of speed and I would actually say completeness.