Accessibility links
What A Reporter Learned When He Infiltrated An Arizona Militia Group Going on patrol along the U.S.-Mexico border with the Three Percent United Patriots — amped up and equipped with night vision goggles — felt like going to war, says journalist Shane Bauer. 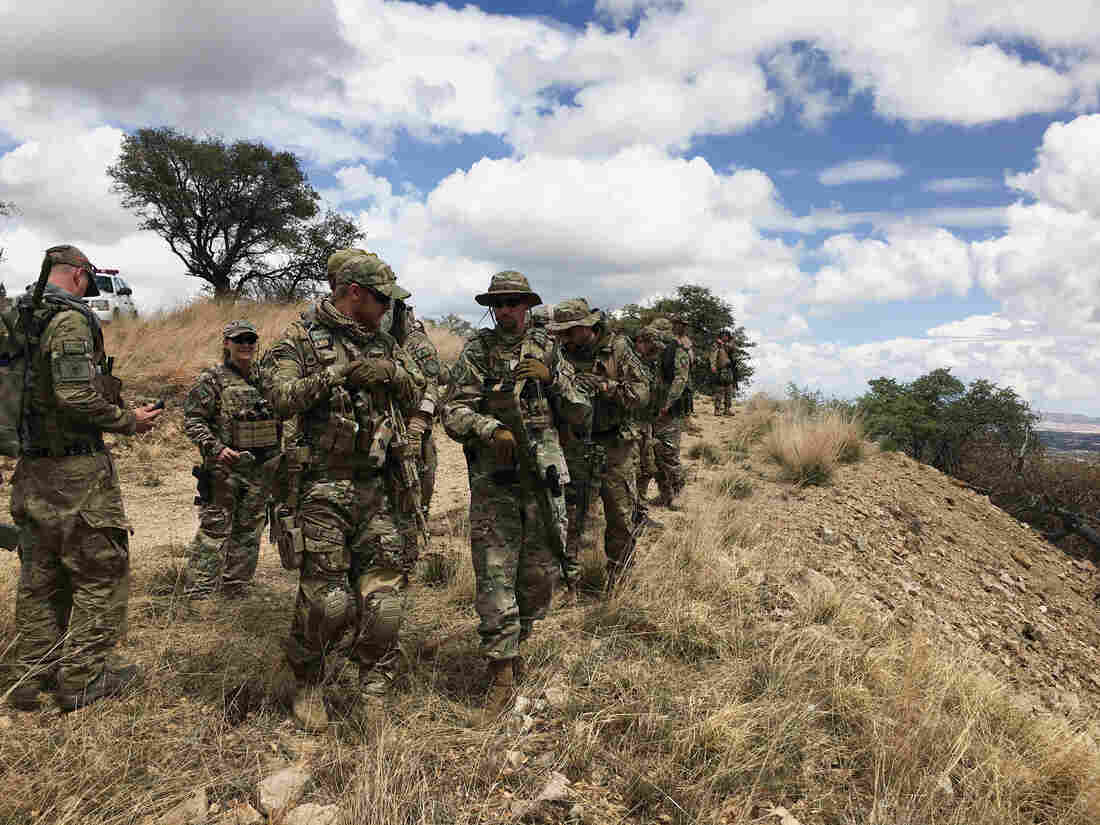 Members of the Three Percent United Patriots assemble in Arizona near the U.S.-Mexico border. It is one of about 275 militia groups in the U.S. Shane Bauer/Courtesy of Mother Jones hide caption 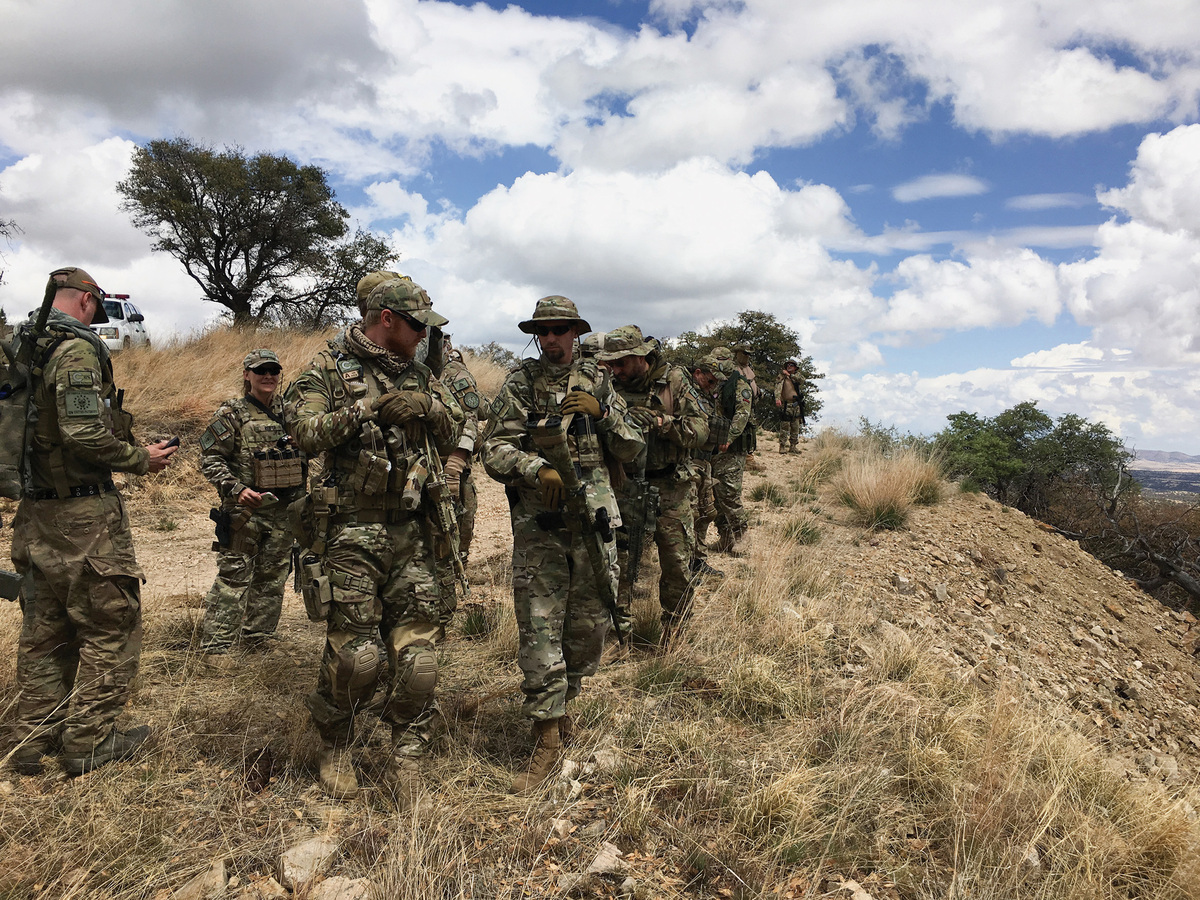 Members of the Three Percent United Patriots assemble in Arizona near the U.S.-Mexico border. It is one of about 275 militia groups in the U.S.

Along the border between the U.S. and Mexico, armed groups on patrol — mostly men — look for illegal immigrants and drug traffickers. They're not U.S. Border Patrol, but regular people who've decided to take matters into their own hands.

They call themselves militias. Groups such as these have been around for decades, but they exploded in number after Barack Obama was elected president. Today, there are 276 militia groups around the country, according to the Southern Poverty Law Center.

Shane Bauer, a reporter with Mother Jones magazine, went undercover with one of those groups — the Three Percent United Patriots — on one of their operations in southern Arizona.

"They didn't know that I was a journalist," Bauer tells NPR's Kelly McEvers. "I didn't lie to them, but I was just there as another militia member, so they're all being very frank around me."

Describe the organization you infiltrated. What is their goal?

What they say to each other is that they are looking for drug cartels. That's also their public statement about what they're doing. ... Some of these guys, when they roll out of the guarded, armed camp, they're really amped up. They're going out at nighttime with night vision, and guys are talking about hunting Mexicans. It feels like going to war. Their stated goal is to find people and report them to the Border Patrol.

On The U.S.-Mexico Border, Looking Out For Lookouts

On The U.S.-Mexico Border, Looking Out For Lookouts

Tell us about some of the people you met there — particularly the guy who went by the name Iceman.

A good number of them are military veterans. Some had done multiple tours in Iraq or Afghanistan; there was one sniper who was there. Some of them are just people that lived in the suburbs, kind of working class, mostly white men.

Iceman is a guy from Aurora, Colo., had been in the Marines in Afghanistan. He was struggling to hold jobs, to get good jobs. He had a child who had health problems, seemed generally kind of alienated. And when he left the Marines, he ended up looking for militias to join and he found the Three Percent United Patriots and joined up.

When we're out in the wilds of Arizona, rolling around in a pickup truck, armed to the teeth, he said, "This reminds me of Afghanistan," and he was very frank about it. For him, this was therapy. 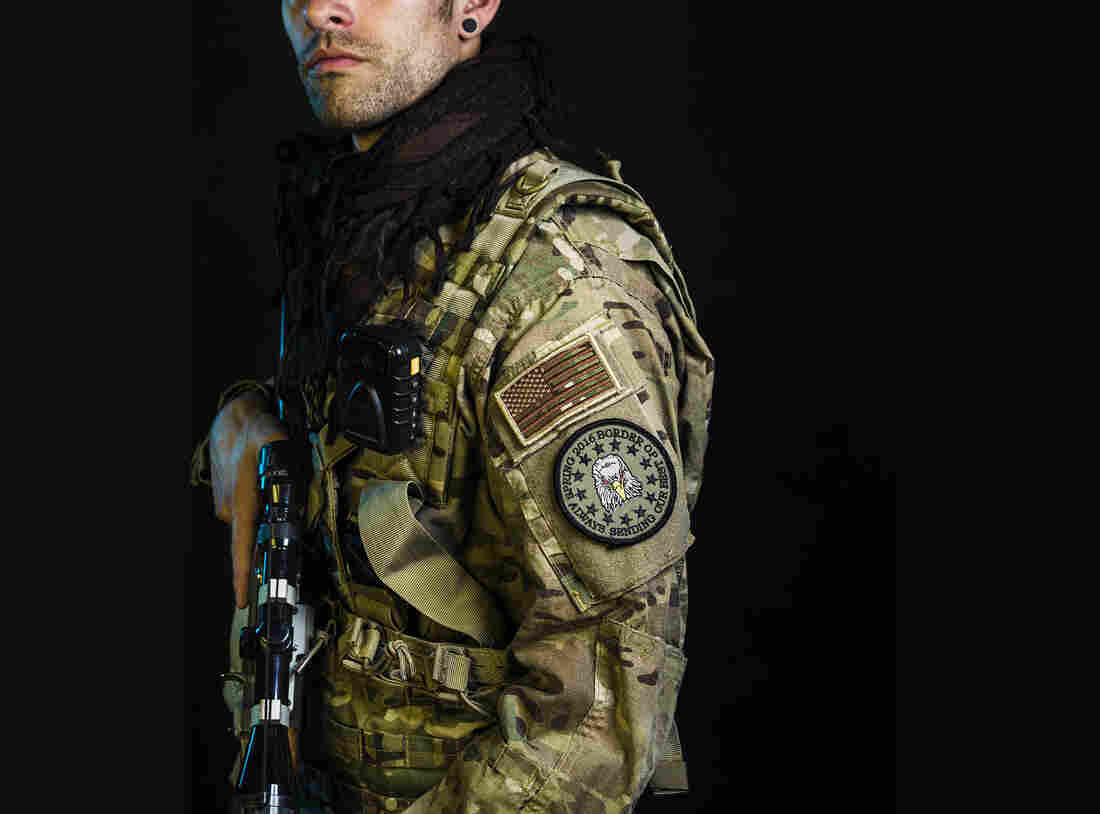 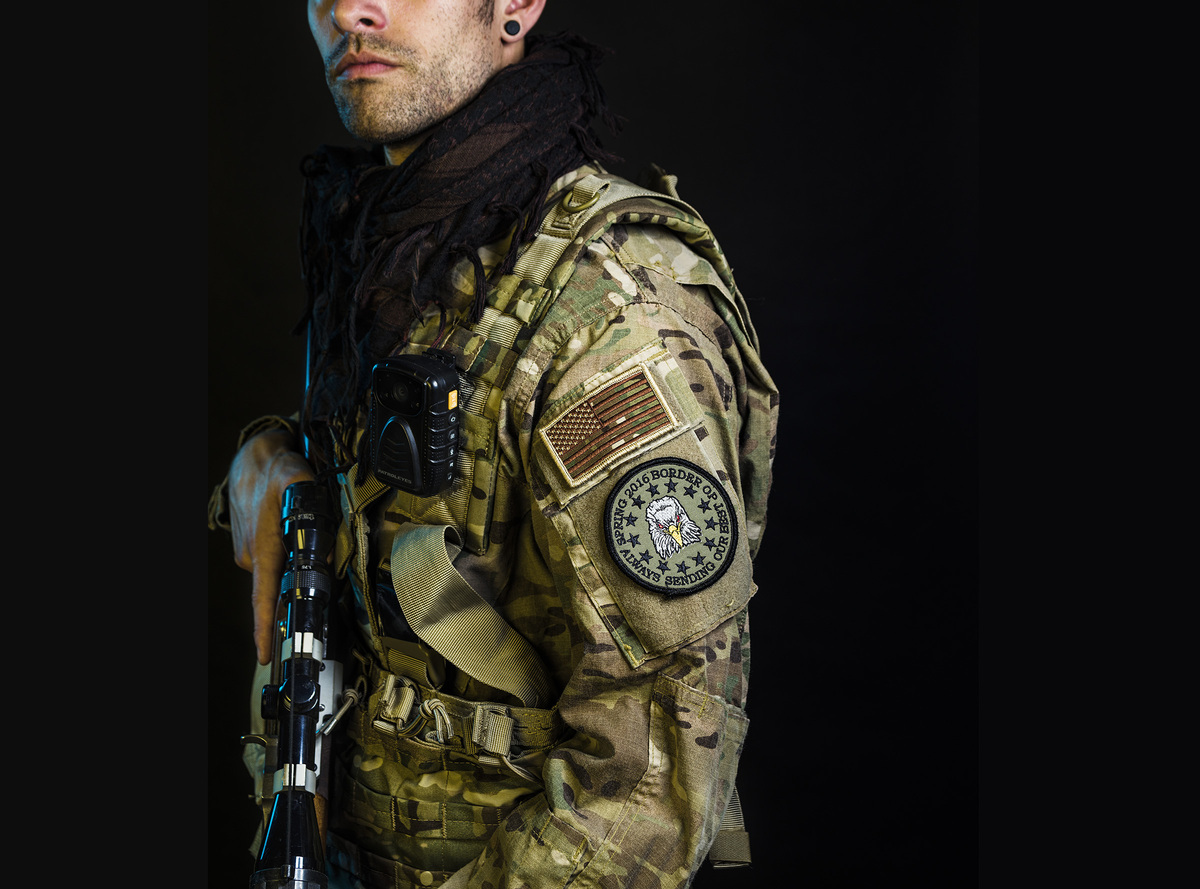 So what these militias are doing — is it legal?

That's a big question. They call themselves militias because they're associating themselves with the militias of the time of the Revolutionary War. The modern-day militias see themselves as a defense against the federal government. They believe in a lot of wild conspiracies about the U.N. invading the United States to take away everyone's weapons; the government has concentration camps ready to put patriots in.

But the issue is that the law does not provide for people to organize and train on their own. And a lot of states have laws against militia training, and against paramilitary training, but these laws have never been enforced.

What is their motivation?

This is something I thought about a lot while I was there. ... People have very individualized reasons for doing it that tend to point to some conspiracy, or fear that the federal government has too much power.

But it seemed to me that there was something much deeper than that. Part of that seems to be a kind of sense that they — white men — are losing power, and I think a lot of them are not happy with that.

But I think there's also a sense of just excitement that they get from this. Initially, I was judging them internally for this. But then I realized that, look, in some ways, I'm there for a similar reason. These guys, like myself, are enjoying this kind of excitement, and maybe that's the reason they're there, because they feel that they're out in a kind of Wild West and they're basically re-enacting war again.