Accessibility links
Hillary Clinton's And Donald Trump's Closing Arguments And Strategies Before Election Day 2016 The NPR Politics team lays out what voters will see from each candidate in the final days of the 2016 presidential campaign. 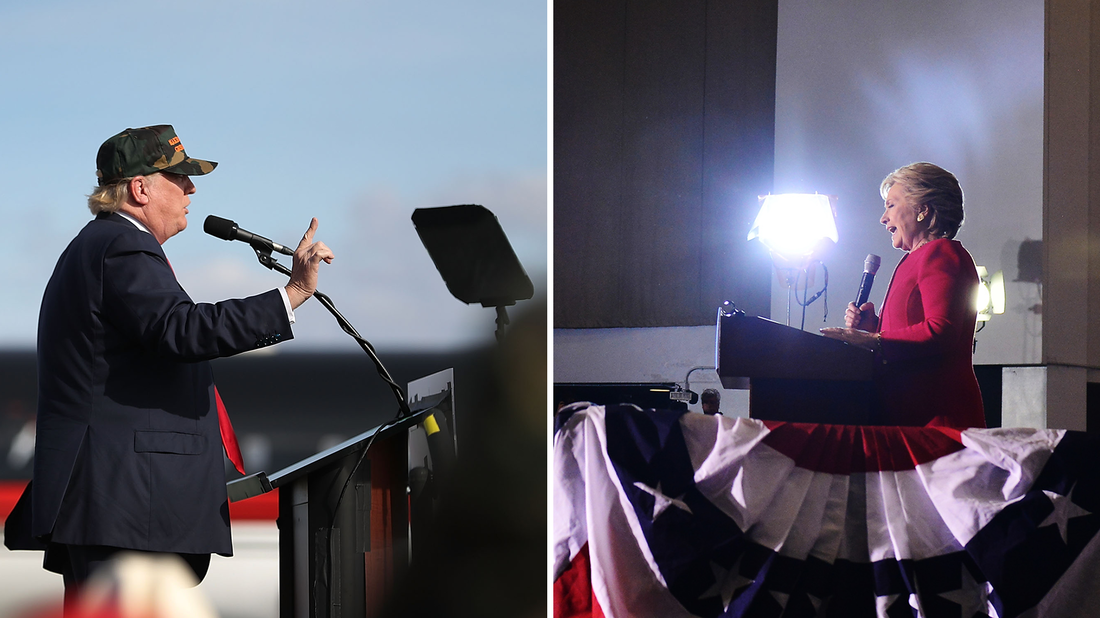 Donald Trump and Hillary Clinton are making their closing arguments to voters across swing states as the campaign moves into its final days. Both candidates have spent significant time in Florida — a must-win state for Trump. Joe Raedle (L) and Johnny Louis (R)/Getty Images hide caption 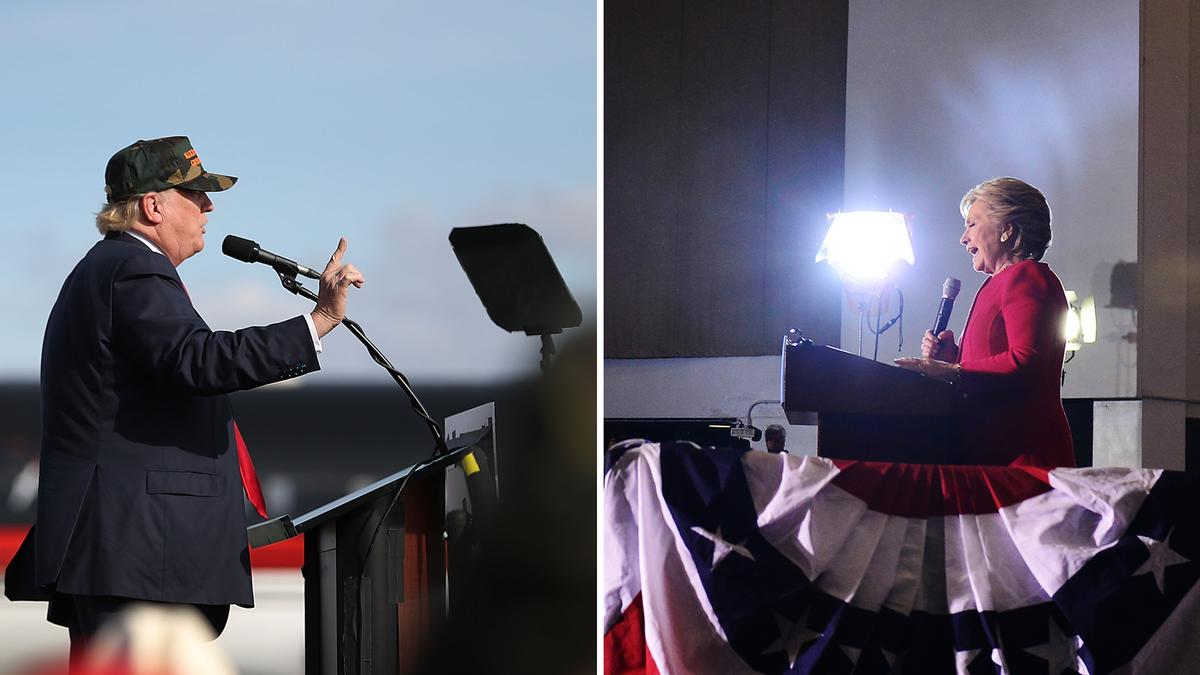 Donald Trump and Hillary Clinton are making their closing arguments to voters across swing states as the campaign moves into its final days. Both candidates have spent significant time in Florida — a must-win state for Trump.

With less than two weeks to go before Election Day, Donald Trump and Hillary Clinton have each framed a closing argument to voters. Each is also focusing on battleground states in ways that reveal different paths to victory — earning 270 electoral votes on election night. (You can read more about the state of play here.)

Here, we lay out what voters will see from each candidate in the final days of the 2016 presidential campaign. 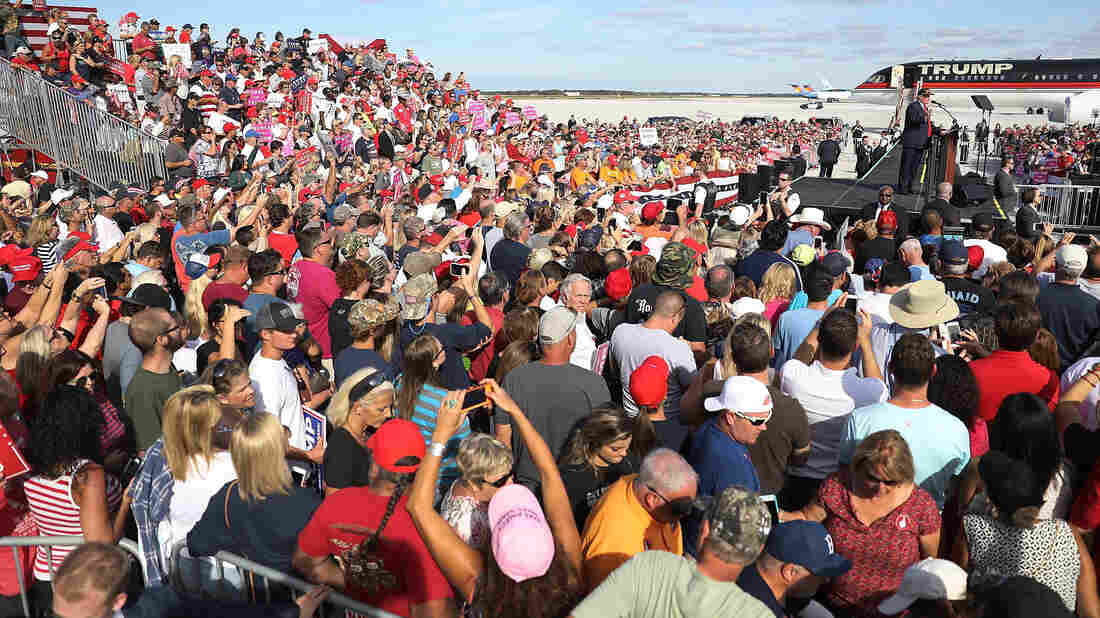 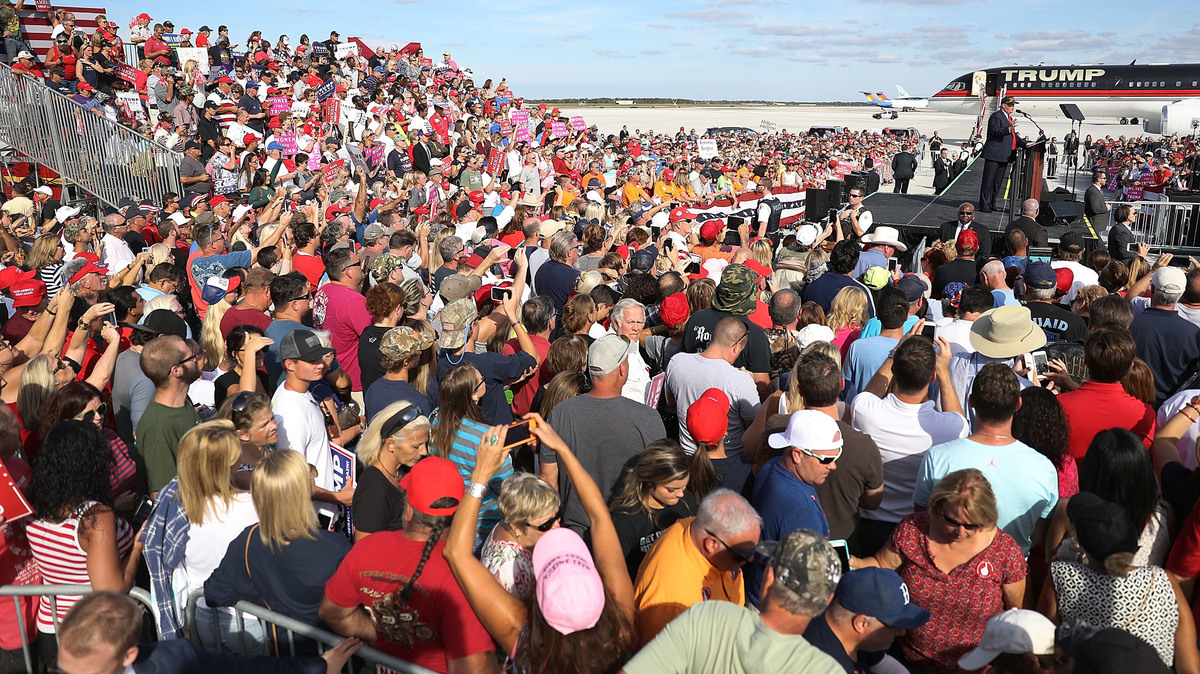 Donald Trump speaks during a campaign rally Tuesday at the Million Air Orlando, at Orlando Sanford International Airport in Sanford, Fla. Trump has spent the past several days campaigning across Florida.

Trump has ridden a wave of anti-Washington sentiment all year, and in the final weeks of his campaign he's trying to crystallize that message.

Trump recently rolled out a reform package he's referring to as "draining the swamp." Trump wants to pass a constitutional amendment setting term limits for lawmakers. He's also calling for a hiring freeze on non-military federal employees, lobbying restrictions, and a sharp reduction in federal regulations.

Trump is now citing these proposals at every rally, along with a long laundry list of other priorities for the first hundred days of a Trump administration. Those include:

The Trump campaign has been running this ad in heavy rotation to draw a contrast between the Republican and Democratic nominees, to show how he will "Make America Great Again."

There's a problem Trump continues to create for himself: These policy proposals are often lost in the headlines created when Trump dwells on grievances against his perceived enemies in the media, government and other "elite" power structures.

Take Trump's recent speech in Gettysburg, Pa., which was billed as the roll-out of his agenda for the first 100 days of a Trump administration. Trump began the speech by promising to bring legal action against women who have accused him of sexual assault and harassment. This new threat — and not the repackaged proposals he had spoken about before — became the day's news.

Trump spent several minutes at a Monday rally in St. Augustine, Fla., railing against the media. "They're almost as crooked as Hillary," he said. "They may even be more crooked than Hillary, because without the media, she would be nothing."

In Trump's telling, the FBI is in league with the Obama administration in its decision not to bring charges against Hillary Clinton for her private email server. And the press is in league with Clinton's campaign.

Trump, Down In The Polls, Tells Supporters To Ignore 'Phony Polls'

Trump has said polls showing him trailing Clinton are "phony" and that fact-checkers are "crooked as hell" — which fits his brand as the "anti-everything," as NPR's Mara Liasson has framed Trump's approach. This resonates powerfully with the GOP nominee's core supporters, but it's unclear how strong that appeal is beyond Trump's base. 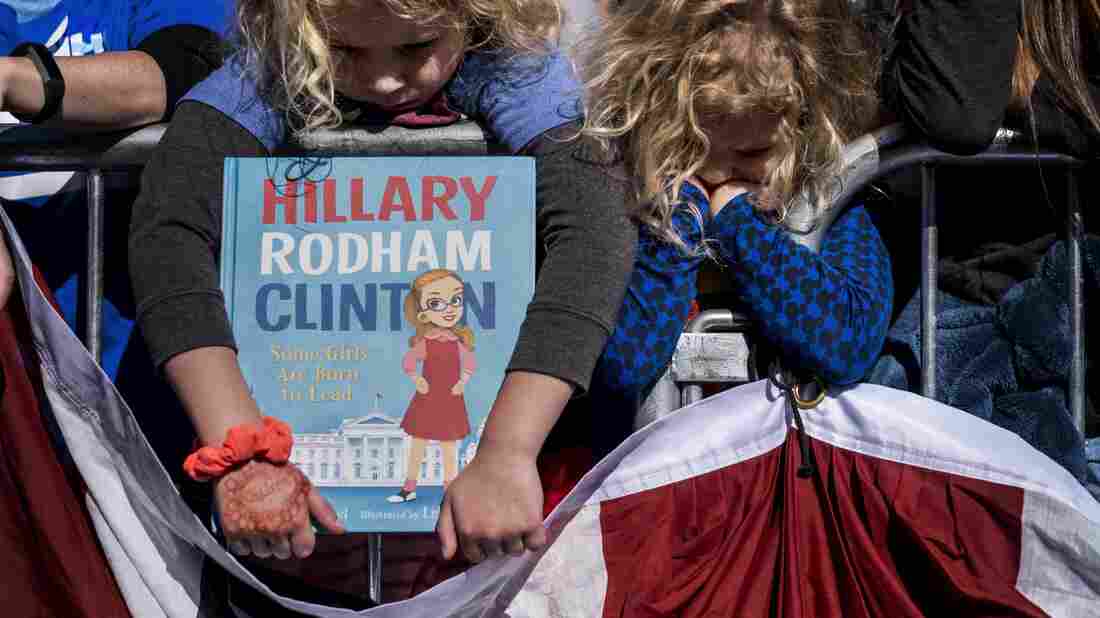 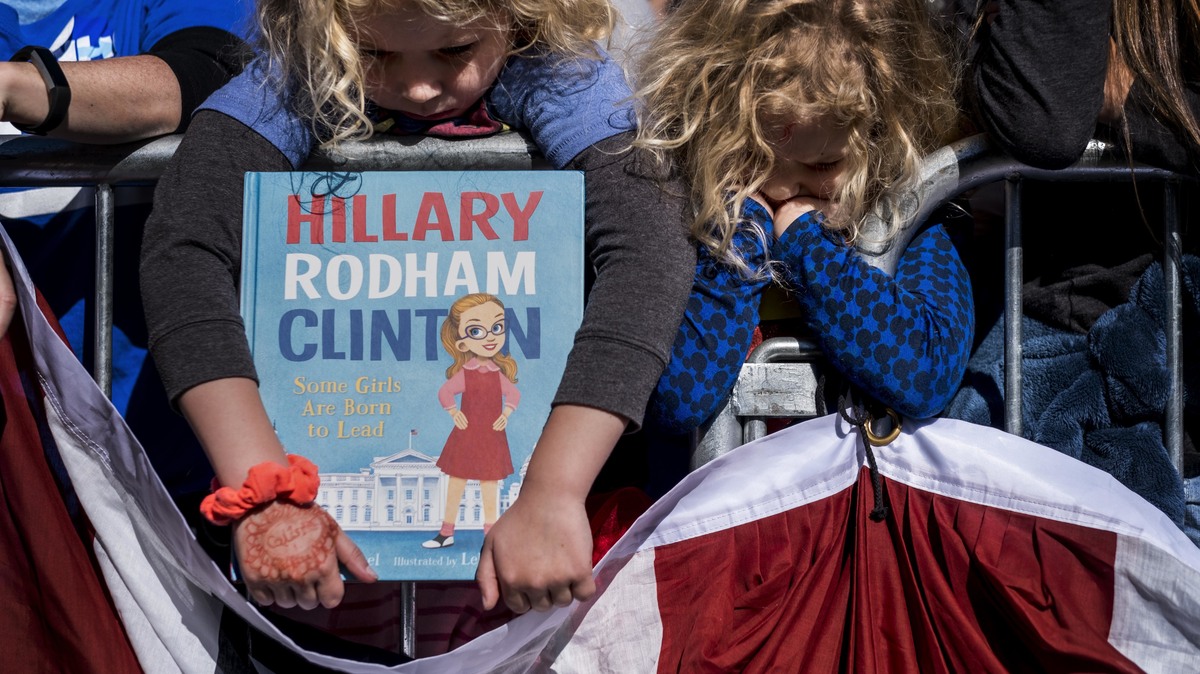 Young supporters wait to meet Hillary Clinton at a rally at Saint Anselm College in Manchester, N.H., on Monday.

On the stump these days, Clinton continues to highlight her policy agenda, often circling back to issues she's been discussing on the campaign trail for months, such as college affordability and equal pay for women. She's also keen to talk about climate change and job investments.

Clinton is a policy wonk, and she's leaning into that in these final weeks. At the same time, she's increasingly willing to nod to the historic nature of her candidacy. She explicitly tied her policy goals to her gender this way on Monday:

"I do have a lot of plans, I do. And I get criticized for having so many plans," Clinton said. "Maybe it's a bit of a women's thing because we make lists. We do, we make lists, and we try to write down what we're supposed to do and then cross them off as we go through the day and the week. And so, I want you to think about our plans as our lists — our lists as a country."

Clinton often ties all of her ideas back to one central theme — that the decisions the next president makes will affect the kind of country America's children inherit. She's trying to drill home the idea that her campaign is focused on "kids and families."

"This is about more than winning an election; it's about the kind of country we want for our kids and grandkids," Clinton told voters at a rally in Manchester, N.H., on Monday.

In two new ads the campaign released this week, those closing arguments are reinforced as voters are encouraged to think about the future they want for their children.

A Threat To Democracy

Clinton is trying to convince voters that Donald Trump is mounting an "an unprecedented attack on our democracy."

Since the final debate in Las Vegas last week, she's hitting Trump on his reservations about saying he'll respect the results of the election. 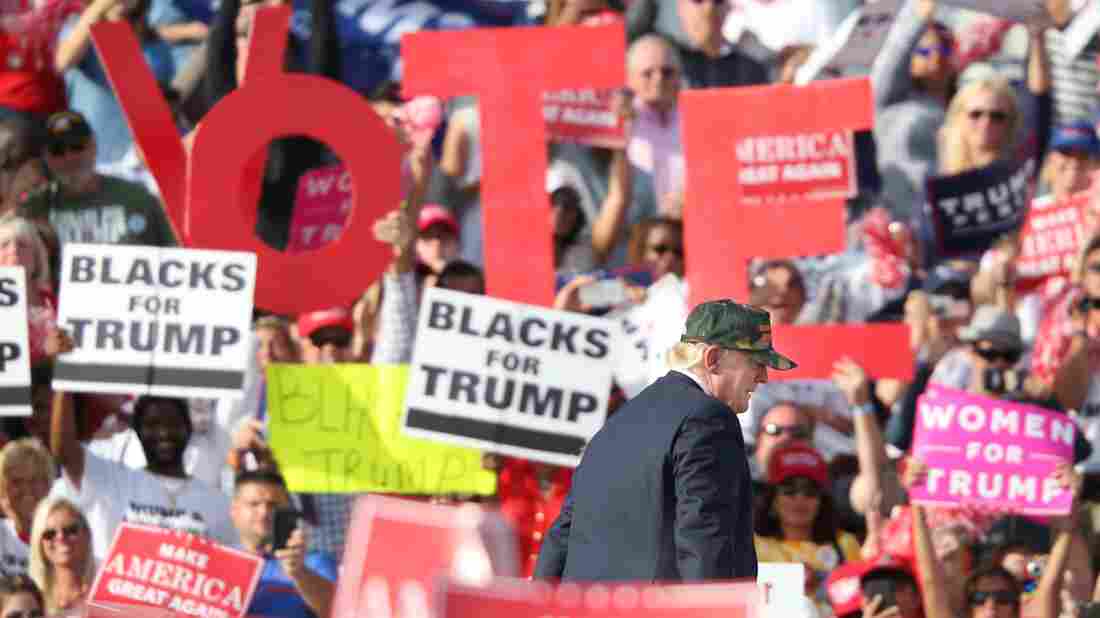 Donald Trump is cheered by supporters at a rally on the tarmac of the Orlando Sanford International Airport in Sanford, Fla., on Tuesday. Gregg Newton/AFP/Getty Images hide caption 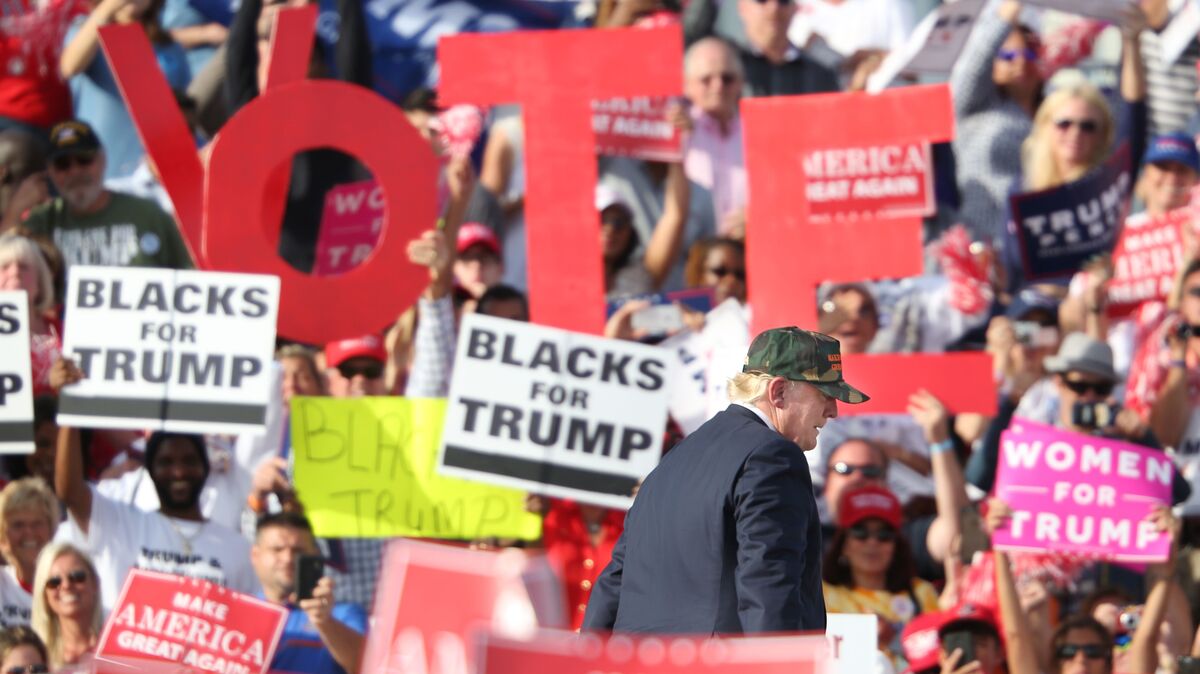 Donald Trump is cheered by supporters at a rally on the tarmac of the Orlando Sanford International Airport in Sanford, Fla., on Tuesday.

To quote the late Tim Russert, Donald Trump's election strategy can be boiled down to "Florida, Florida, Florida." Tuesday marked the third straight day Trump spent in the state. There's a good reason for that: Trump has no plausible path to the White House if he doesn't carry Florida's 29 electoral votes.

"Florida is must-win, and I think we're winning it," Trump told Fox News on Tuesday morning.

In addition to campaigning all over the state, Trump has focused a substantial amount of advertising dollars on Florida.

But Florida isn't enough. Trump has to basically sweep the battleground states in order to win. Other states where Trump is buying television ads — and making repeated visits — include North Carolina, Ohio and Pennsylvania.

Trump will hit two of those states — Ohio and North Carolina — later this week.

In yet another indication of how Trump has blended a presidential campaign with personal business, he's taking time off the campaign trail Wednesday morning to attend a grand opening ceremony at his new Washington, D.C., hotel.

While Trump does that, running mate Mike Pence is campaigning in deeply conservative Utah. That's something the GOP ticket needs to do this year, due to a collapse in support from Utah Republican leaders and serious apathy toward Trump from Mormon voters. Those two interrelated factors have opened the door for independent conservative candidate Evan McMullin to run neck and neck with Trump in Utah.

Trump is also defending a number of other traditionally red states, including Arizona, Georgia and Texas, where Clinton is challenging his lead. 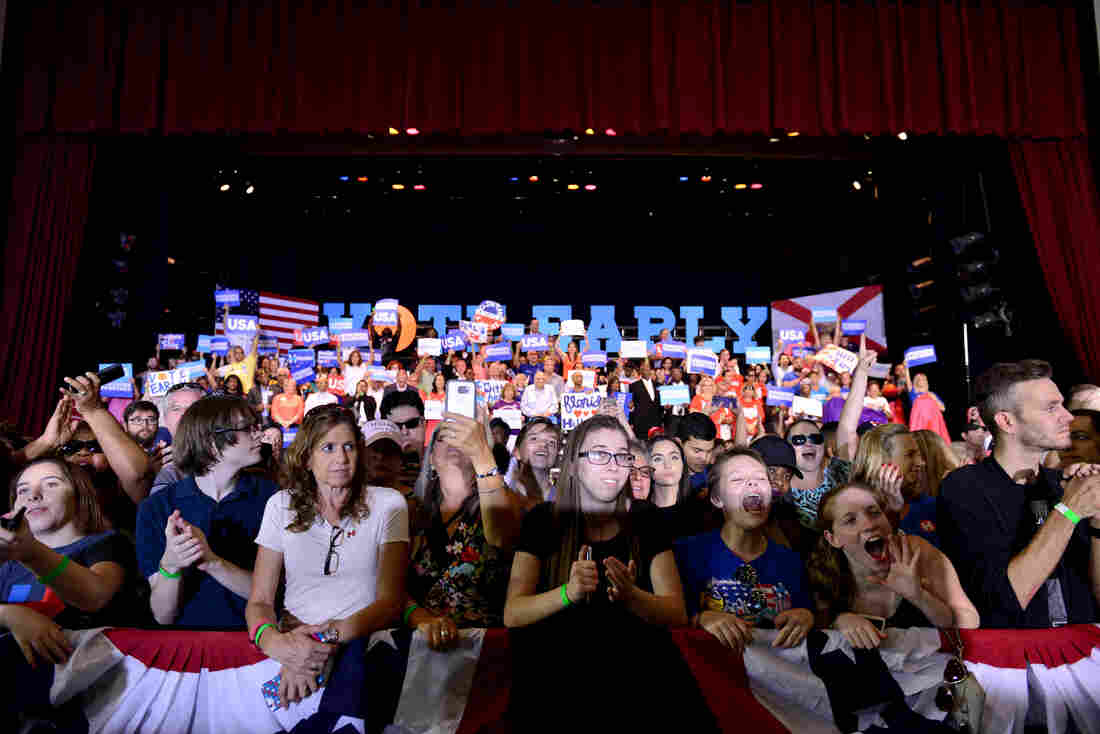 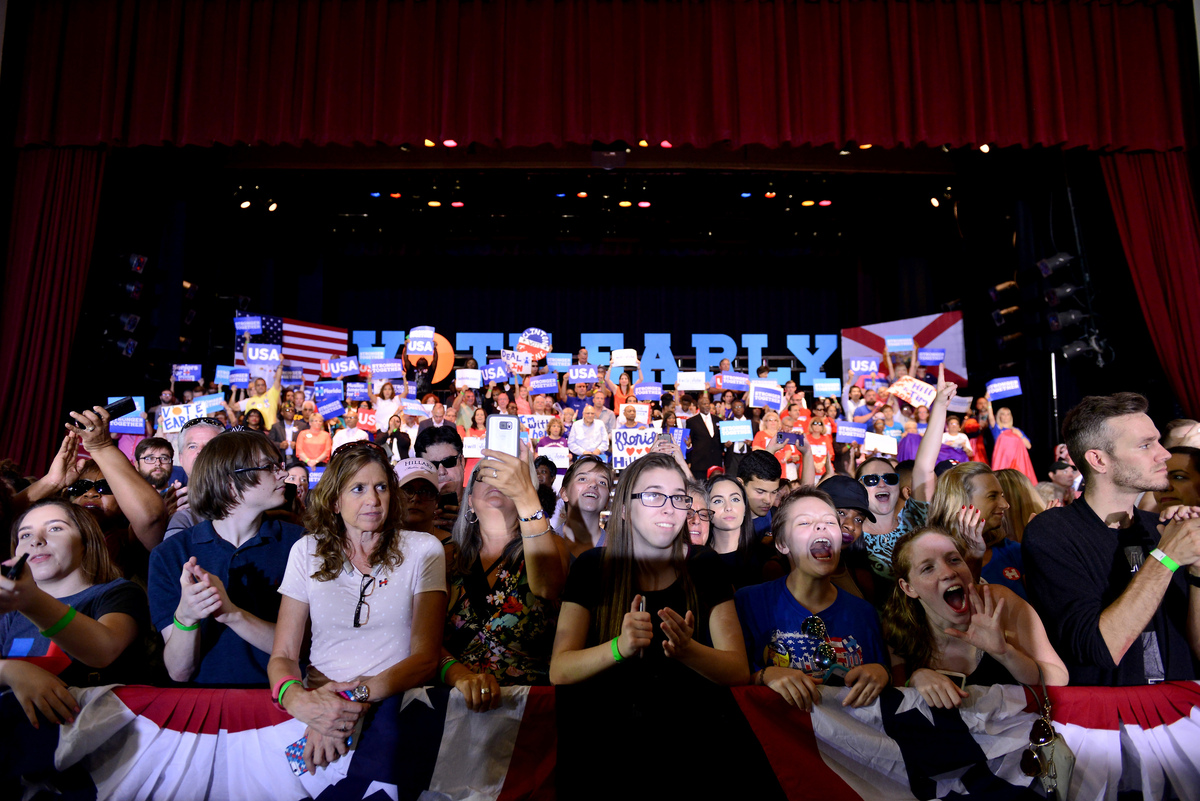 This week, Clinton is focused on swing states where large numbers of people have already begun voting. That includes places like Florida (where she's campaigning Tuesday and Wednesday) and North Carolina (which she'll visit Thursday with first lady Michelle Obama). The campaign estimates some 60 percent of Floridians will cast their ballots by Election Day.

"Florida, Nevada, Iowa, North Carolina — these are all states where we expect a majority of people will have voted before Election Day," said Clinton spokeswoman Jennifer Palmieri.

Democrats have a staffing advantage that could help with turnout in some of these early voting states — for the presidential race and for the competitive Senate races many are seeing.

The multipronged offense is focused on states Trump needs more than Clinton to reach 270 electoral votes. Florida tops the list. On Thursday, Clinton will campaign in North Carolina, a state that went for the Republican presidential candidate in 2012, and on Friday she'll be in Iowa, a state where most of the polls have shown Trump with an edge — though polling has been relatively scarce there in recent weeks.

Clinton's campaign has not ruled out the idea of campaigning in traditionally Republican states, such as Arizona, where she seems to be in a statistical tie with Trump.

She has plenty of backup, too. Michelle Obama and Massachusetts Sen. Elizabeth Warren have gotten lots of attention for their rebukes of Trump on the campaign trail. And President Obama is expected to campaign heavily in the next two weeks. That means Clinton's campaign can simply cover a lot more ground ahead of Nov. 8.

A photo caption in an earlier version of this story mistakenly identified U.S. Rep. Patrick Murphy of Florida as a Pennsylvania congressman.