Accessibility links
Wayne Gretzky On Hockey History, Dreaming Big And Canadian Pride The ice hockey legend marks the 99th anniversary of the NHL with his new book 99: Stories of the Game. Never mind the sport's tough guy reputation; "the game of hockey is an art," Gretzky says. 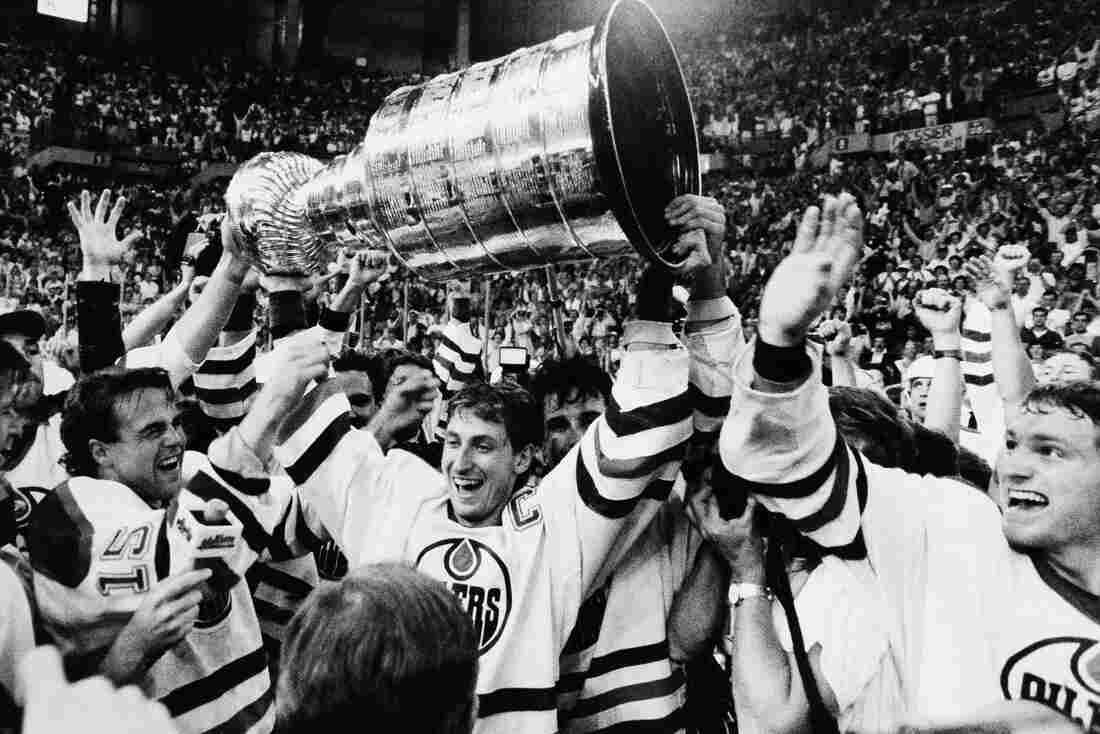 Wayne Gretzky is flanked by his Edmonton Oilers teammates after winning the Stanley Cup over the Philadelphia Flyers in May 1987. Larry Macdougal/AP hide caption 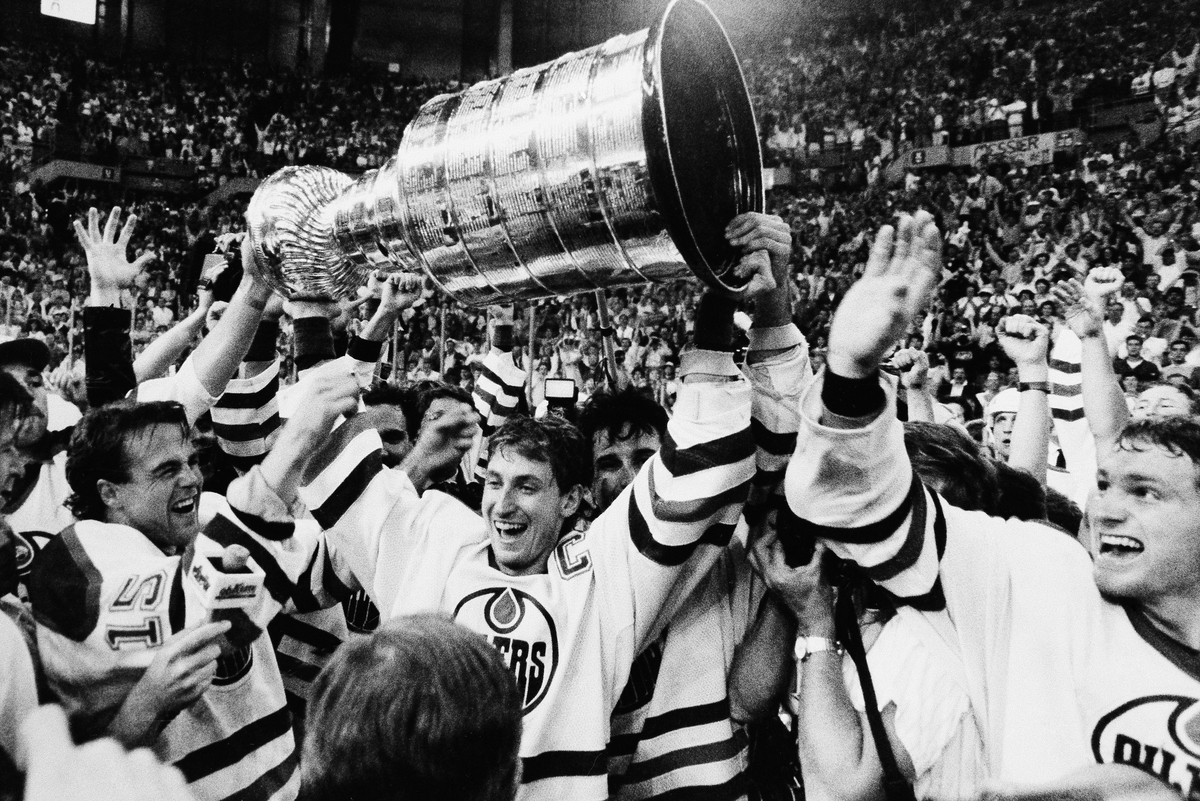 Wayne Gretzky is flanked by his Edmonton Oilers teammates after winning the Stanley Cup over the Philadelphia Flyers in May 1987.

After a bruising career in the rough and tumble NHL, who could blame a guy for wanting to take it easy? At age 55, Wayne Gretzky is still playing charity games with other old timers, but "I'm getting older and slower," he says with a laugh. 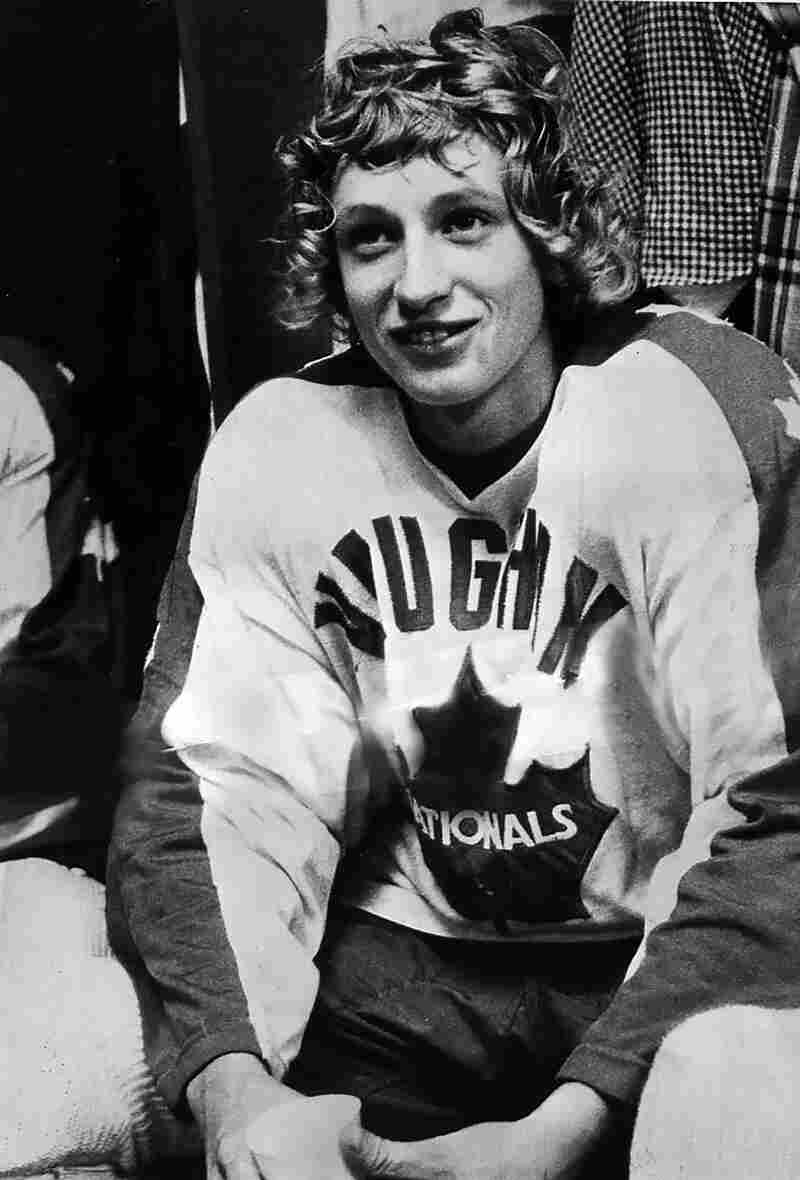 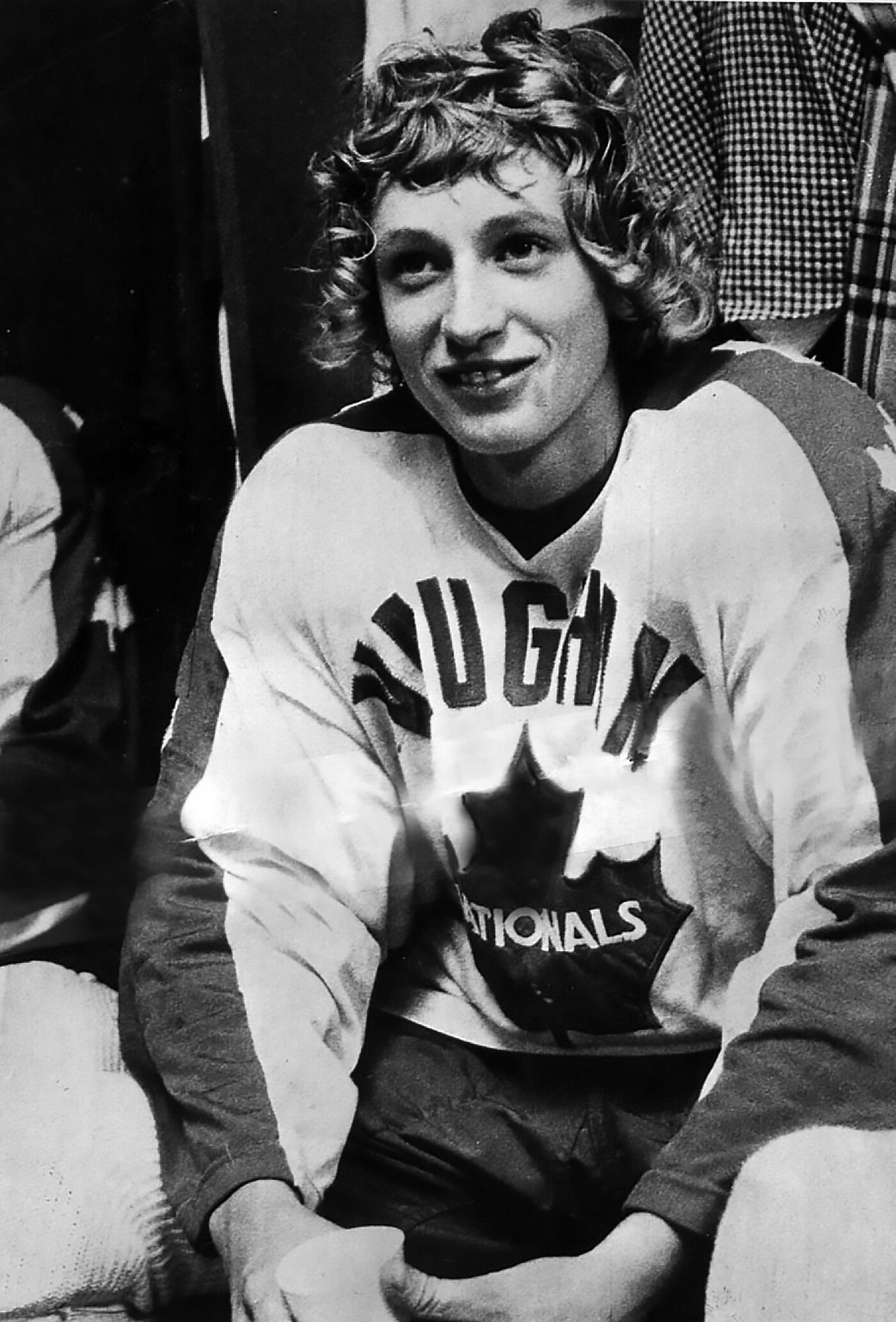 Gretzky grew up in Ontario, where he used to pretend to win the Stanley Cup in his backyard. "You're always dreaming that you're the guy that scores the game-winning goal," he says.

Sports are not just about numbers, but the numbers Gretzky put up in his two decades in the NHL are astonishing. He holds 61 different records, including: most goals in a season, most assists in a season, most goals in the playoffs, and — to top it all off — most goals ever. On the night he set that record, playing for the LA Kings in 1994, Gretzky surpassed his own idol and hero, Gordie Howe, who died in June at age 88.

Gretzky's new book 99: Stories of the Game, captures moments large and small in the league's 99-year history. Gretzky played for a handful of teams — most famously as captain of the Edmonton Oilers dynasty in the 1980s.

Growing up in a small town in Ontario, Gretzky spent hours in the backyard, pretending to win the Stanley Cup. "You're always dreaming that you're the guy that scores the game-winning goal in Game 7," he tells NPR's David Greene. 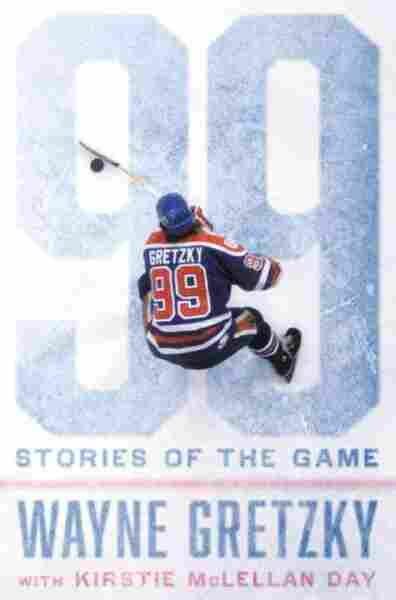 Stories of the Game

In 2002 Canada and the U.S. played the gold medal game in Salt Lake City and I was told that somewhere between 26 and 27 million out of the 35 million Canadians watched that game.

And they said, "What do you think of that?"

And I said, "What do I think of that? What were the other nine million doing?"

That's how much we love hockey in Canada.

On getting to meet his hero, Gordie Howe

I was fortunate enough — when I was 10 years old — I got asked to be a part of this charity event in my hometown that Gordie was going to be part of. And I remember three things: One, I was getting to meet Gordie. Two, I was going to get the day off school. And three, I was officially going to get my first suit.

My mom and dad bought me a blue suit and pair of new shoes that were killing my feet-- like every other 10-year-old — and I got a chance to talk to him. I got some great pictures with him.

I remember when I left there my dad asking me, "How was it?" And I distinctly remember saying to my dad ... "Wow, he's nicer, bigger and better than even I had imagined him."

On Howe being not quite as nice on the ice

If you talked to anybody they would say, "The one guy I fear when I play against him is Gordie Howe." And, yet, away from the ice the perception was, "Well he's so nice we don't care what he does on the ice." And that's was sort of how fans sort of looked at Gordie.

On the Stanley Cup belonging to the city

We shared it with the city of Edmonton. It wasn't just our cup. And by the time we got to the second, third and fourth cup people were genuinely, "OK, geez maybe I'll get to see the cup. Maybe I'll have a barbecue at my house and the cup will be there." ...

I remember I got pictures in the backyard of cooking steaks and potatoes and having the Stanley cup and getting pictures with my grandmothers and friends — you know, that's what it's all about though. That's the great thing about the game.

I think sometimes we read too much into it. And we as Canadians get our dander up pretty easily and pretty quickly that, "Hey, who's trying to steal our game?" But the reality is: I think it's just a cycle.

If you look at a lot of the teams in the United States there's still a great many Canadian kids who are on those teams and at this point and time it just hasn't been the Canadian's team that's been able to lift the Stanley cup since 1993. ...

We're a very proud country, and as much as the Vancouver people cheer for the Canucks or the Flames cheer for Calgary, if a team in Winnipeg or if a team in Montreal did win the Stanley Cup, Canadians would gloat and be extremely happy that: "Well, I wish we would've won, but my gosh it's great a Canadian team won." ...

On what he'd like people to know about ice hockey

I think the biggest thing is, [in] '88 when I went to LA, the image of the National Hockey League was that of toughness and physical aspect and all that goes with it, and yet the game of hockey is an art. It's like Baryshnikov on skates. The game itself is fun to watch. You've got to be a great athlete ... and most importantly the players that we have in the game are really good people. That's what makes the National Hockey League so special.