Accessibility links
'Gimme Danger': Finding Cool On The Brink Of Catastrophe In Jim Jarmusch's jagged documentary, Iggy Pop reflects on the necessary recklessness that made The Stooges punk legends.

'Gimme Danger': Finding Cool On The Brink Of Catastrophe

'Gimme Danger': Finding Cool On The Brink Of Catastrophe 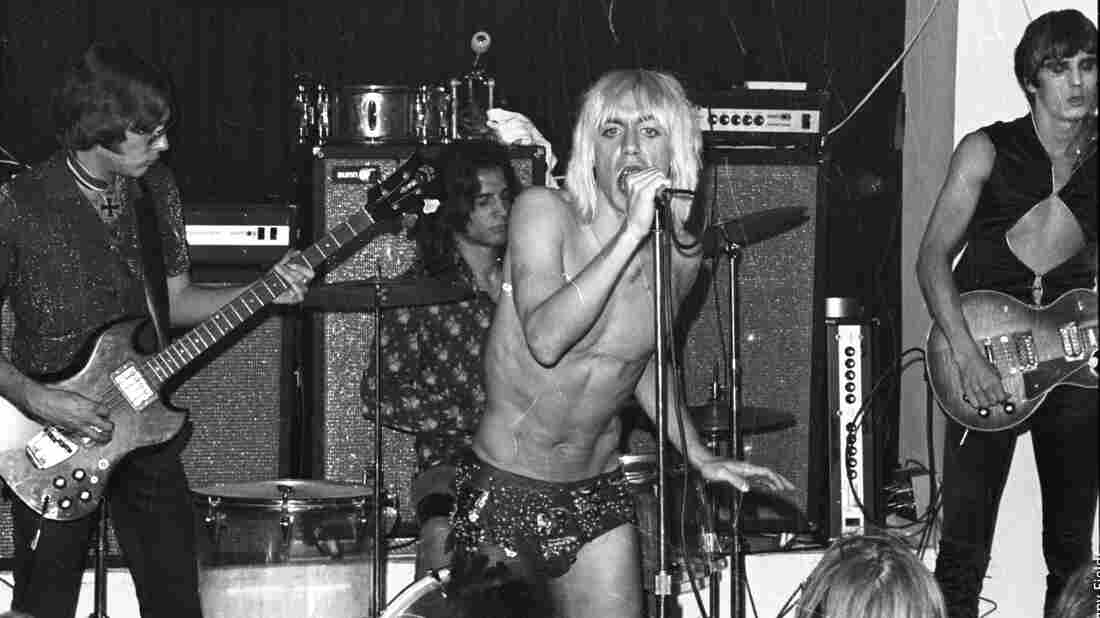 "We weren't like the other bands," says The Stooges drummer Scott Asheton in the music documentary Gimme Danger. Danny Fields/Courtesy of Amazon Studios/Magnolia Pictures hide caption 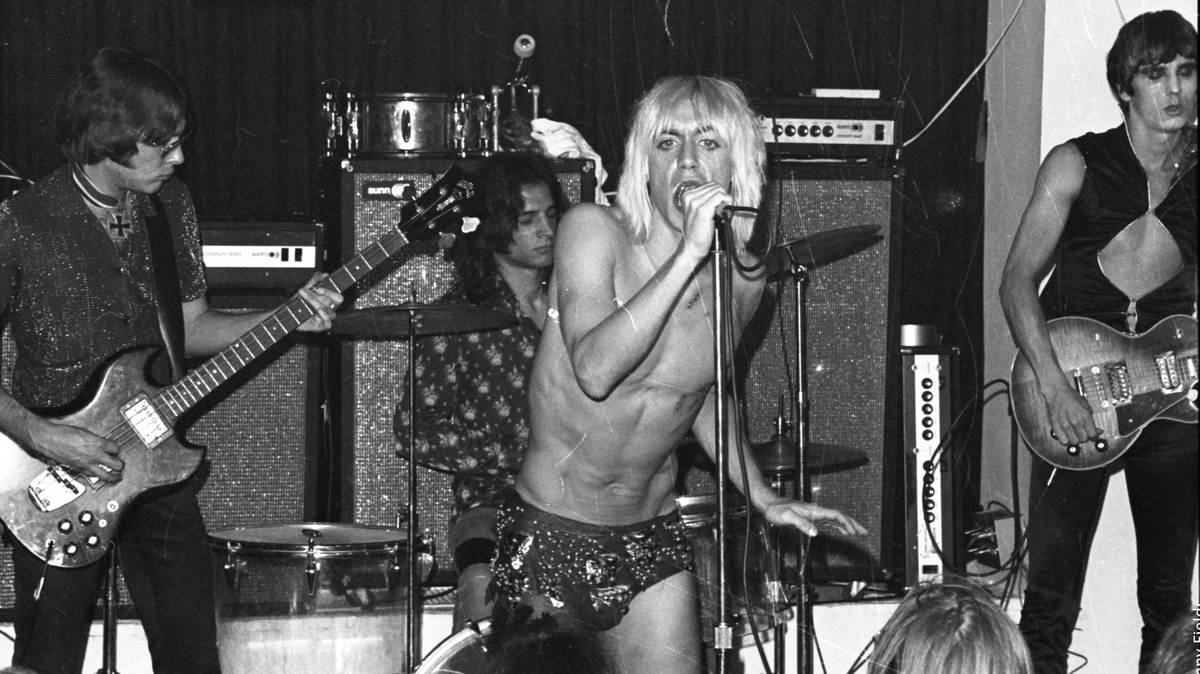 "We weren't like the other bands," says The Stooges drummer Scott Asheton in the music documentary Gimme Danger.

Iggy Pop cares very deeply about things that are cool. This is clear throughout Gimme Danger, the new documentary about the legendary rock band The Stooges, just based on the choices their wild, writhing, frequently shirtless frontman makes at every stage of his career: jumping into the crowd during his shows, squatting in a house in Detroit after the 1967 riots, taking advantage of a post-breakup contract with David Bowie to reunite the band on someone else's dime. But his love of cool at the expense of all else comes especially into focus during his acceptance speech from The Stooges' induction into the Rock and Roll Hall of Fame in 2010. "All the poor people who actually started rock-and-roll music are cool," he says in the clip.

These days the "rockumentary" is big again—not in the Spinal Tap sense, but in a fully earnest form, where a band in its golden years gazes back on its time in the limelight with a knowing chuckle and embraces every drug-fueled act of rebellion as the moment when music changed forever. As filmmakers run out of Boomer-era acts to profile, some are even turning to band managers instead. But are these kinds of nostalgic exercises "cool"? Or are they, as the arbiter of cool himself says here about the corporate flower-power acts marketed against The Stooges the late-'60s, another form of hijacking poor people's cred for a quick buck?

Well, if anyone could be cool enough to document the Ann Arbor forefathers of punk, it's Jim Jarmusch. The closest thing to a rock star in American cinema, Jarmusch—a lifelong outside-the-system filmmaker who often casts musicians in his movies—has a deep affinity for the subculture The Stooges helped usher in. It's noticeable even in films of his that outwardly have nothing to do with music, like the natty comic nihilism of his period Western Dead Man, but particularly in the ones that do. Jarmusch's Only Lovers Left Alive, in which Tom Hiddleston played a reclusive Detroit vampire who's released centuries' worth of compositions under famous names, might as well have been an alternative Iggy Pop history: Both men share Michigan ties, long hair, an under-appreciated role in the development of popular music, and the leathery skin and twisty bone structures of the undead.

In Gimme Danger, Jarmusch makes the canny decision to identify Iggy by his birth name, Jim Osterberg, which has the effect of stripping away the artificiality that often plagues rock-docs of this sort. In fact, Jarmusch's greatest accomplishment here may be that his film looks and feels just as raggedy as the band itself. Title cards in rock-poster font announce major chapters ("Stooges to L.A.!!"), while stories from the bandmates themselves, via interviews largely conducted in laundry rooms and other "undisclosed locations," are illustrated with jerky animated sequences that could be lunchroom doodles.

The movie opens with the band's 1973 flameout, brought on by drug abuse and backstage violence. It then jumps back to their already-rickety 1967 beginnings, when Osterberg, along with brothers Ron and Scott Asheton (guitar, drums) and novice musician Dave Alexander (bass), were making up their dirty, primitive sound as they went along, landing a record deal due to their association with the much buzzier MC5. Jarmusch could be arguing that the band's entire trajectory was its own kind of flameout—one deliberately done for spectacle, like a stuntman's controlled crash. From the beginning, the band's nasty, antagonistic tendencies had as much potential to finish them off prematurely as they did to secure their legacy.

Where did all that, err, raw power come from? Osterberg himself name-checks early influences for his onstage behavior, including the kids' clown Soupy Sales, and it was Howdy Doody's request for his viewers to keep their letters to him short that led to the naked simplicity of Stooges lyrics like "Last year I was 21 / I didn't have a lot of fun." The band stayed apolitical even as contemporaries dug into the antiwar movement, a choice that in Osterberg's telling seems to have been born as much out of sheer apathy as anything else, but nevertheless seems to have freed them to make fools out of themselves. Not that they wouldn't have done that, anyway.

The film tells the story almost entirely through The Stooges' own words, including the now-deceased Ashetons (archival footage for Ron, new interviews with Scott recorded before his 2014 death). A side plot allows for a fun comeback narrative involving guitarist James Williamson, who joined the band for the Raw Power sessions in 1973 but retreated to a career in Silicon Valley in the intervening years, until Osterberg called him out of the blue to join the reunion tour in the mid-2000s. But even as he drags his veritable encyclopedia into a largely self-indulgent second hour, Jarmusch still leaves things off the table; more live footage of Osterberg in full vampire mode surely would have made his case for musical mischief better than the 69-year-old's overly heady modern-day recollections.

Whatever nebulous value defines "cool" at the end of the day, the hands-down coolest thing about Gimme Danger is seeing how a weird, self-described "trailer park kid" from the outskirts of Ann Arbor, working with wildly differing levels of musical talent, could influence generations' worth of the most prominent names in rock. By this value alone, The Stooges may be the biggest secret success story in music. Gimme Danger preserves their legacy better than any fan might have dared hope: by showing how the "poor people," imperfections and all, could shock the world through sheer force of will.