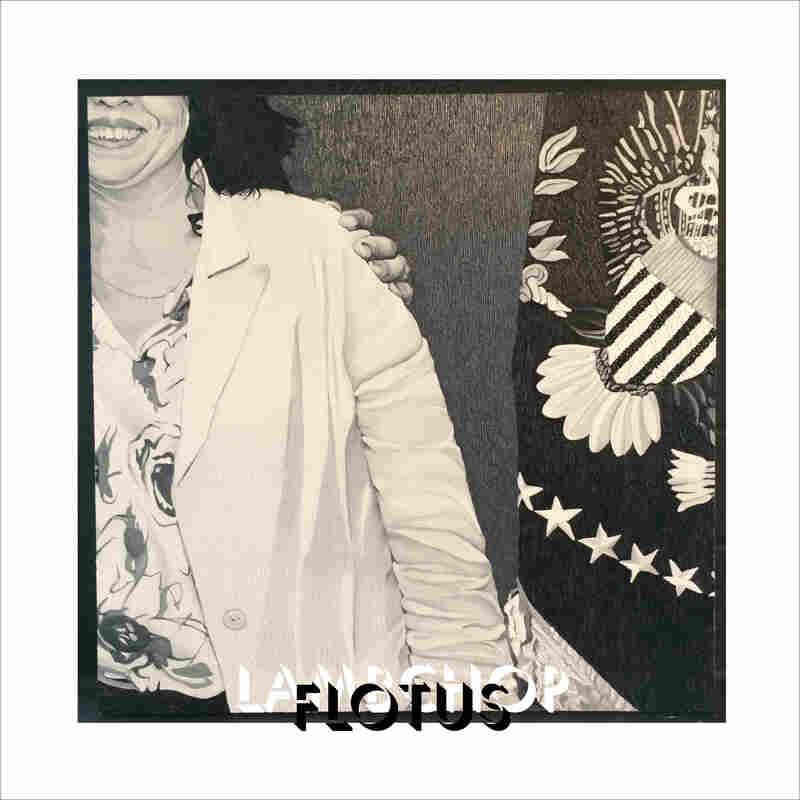 It isn't always easy for an established group to pivot toward a new sound — but it might be a little easier for Kurt Wagner. The mastermind of the Nashville indie group Lambchop has long employed his project as an ever-changing entity rather than a fixed ensemble. Moreover, he's been restlessly reimagining the country-folk idiom since the early '90s: first as a hushed, blackly humorous troubadour, then as an increasingly adventurous singer-songwriter who's as interested in space and texture as he is well-crafted turns of phrase.

Wagner's ambition has taken a hard left on Lambchop's new album. Titled FLOTUS — which has nothing to do with Michelle Obama, standing instead for the evocative phrase For Love Often Turns Us Still — the record ditches the band's typical organic feel. In its place is something far more progressive. In "Howe," Wagner loops and smears his vocals into a softly glitchy wash; in "JFK," a sequence of synthesized orchestration drifts like an iceberg over occasional plunks of piano. "Directions To The Can," despite its throwaway title, is an immaculately chiseled exhibition of icy art-rock. Nowhere is Wagner's new approach more arresting than in "NIV." Chugging along on a Krautrock pulse, a synth-pop hook and robotic vocal modulation straight out of Laurie Anderson's toolbox, it traps Wagner's rootsy air in a startling new context.

It's been more than four years since Lambchop's last full-length, Mr. M, which marks the longest gap the group has ever had between albums. Wagner's put that time to good use. The songs are still slow, sad and dryly witty — this is a band, after all, that once sarcastically named an album Thriller — but that countrypolitan vibe has been filtered through effects, processors and a nervy deconstructionist sensibility. Gone are the pillowy orchestration and pedal steel that typified the Lambchop of yore. Blips and beeps abound. One thing remains intact: Wagner's whispery and understated delivery, his way of making even the most willful subversion of songcraft feel intimate and unpretentious.

Humble and mumbling though it may be, FLOTUS is bookended by two miniature epics. "In Care Of 8675309 — presumably a nod to Tommy Tutone's 1981 hit "867-5309/Jenny," as Wagner loves his pop-culture references — opens the album with 12 minutes of shuffling melancholy and subtly soaring melody. The closing track, "The Hustle," is even longer, and its 18-plus minutes host one of the most radical experiments Lambchop has ever undertaken. Built on a polyrhythmic, electronic, Tortoise-like beat, it unfurls like some futuristic soundtrack to faded memory. Wagner barely sings, and when he does, he makes another coded reference to pop's past. "There was talk of love in Tennessee / Of the beauty of the '70s," he croons before adding, "Do the hustle." Suddenly, the song makes sense: In a warped way, it's Lambchop's idea of a disco anthem. With all due apologies to Van McCoy.

Wagner's cryptic twang, as usual, can be viewed as a wry, ironic antidote to Nashville's ultra-traditionalist streak. But FLOTUS is more than just a hometown counternarrative. Like the rest of Lambchop's decades-spanning discography, the album is a mordant document of Wagner's obsessions, observations, emotions and cultural baggage — along with no small amount of haunting tunes. Here, though, it houses a gripping new tension between the ghosts of yesterday and the sounds of tomorrow.